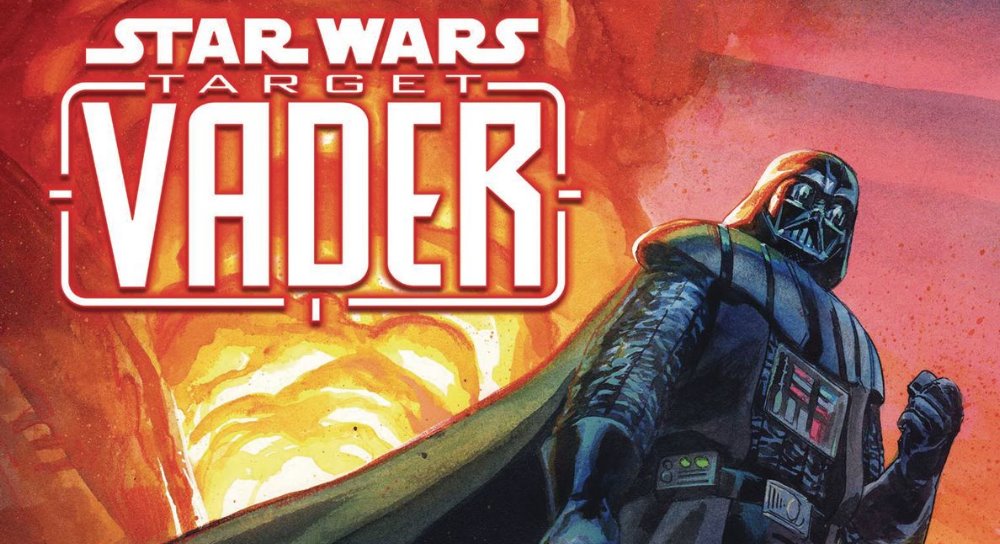 With the power of the dark side of the Force at his command and the might of the Empire to unleash, Darth Vader is the most dangerous being in the galaxy. But he is not without challengers.

The cyborg Beilert Valance, along with fellow with bounty hunters Honnah, Urrr’k, Chio Fan [sic] and Dengar, was contracted by the mysterious organization the Hidden Hand to achieve one goal: kill Vader.

But Valance’s team has been wiped out by the Dark Lord, and Valance’s last shot to take him out with an EMP device fizzled…thanks to the betrayal of Dengar!

If Target Vader is to stumble, it will be at the final hurdle because issue 5 is yet another cracking issue as we see for ourselves just what Valance gave – and gave up – for the Empire. Indeed, the image of a burning Valance, blown up on the field of battle leading his men after the Empire abandon them isn’t a million parsecs away from a burning Anakin Skywalker on the lava shores of Mustafar. Perhaps Valance and Vader – both more machine than man – aren’t so unalike.

Perhaps that’s the slow-drip reveal trick of the series, showing young men failed by their circumstances and thrown into larger destinies. Vader one fueled by the Force, Valance a life of eager service cut short by…well, destiny. He was meant to take the path that he did, but it’s also worth noting that the Empire rewarded that service. After extensive surgery, he was discharged, allowed to walk away to find a life after the Empire. That he chose to go home to Chorin, wrung dry and left a husk of a world by the Empire was his choice. As was his path of vengeance, and the eventual hunt for Vader.

As we left him in the last episode, Valance had been taken down by Dengar, who was well recompensed for his services and told by Vader that his services may be needed again in the future. Interestingly, the amount of funds he has clearly earned is substantial, but knowing the costs of running a starship thanks to Solo: A Star Wars Story, perhaps these hefty sums of recompense aren’t so hefty after all. Fuelling and running a starship is hardly like running a car / landspeeder, more like a jet fighter.

That Vader darkly interrogates Valance using the Force, looking for the location of the Hidden hand is no surprise, and neither is Beilert escaping from his cell back to the ship. What initially appears to be a compromise on his part is his agreement to rejoin the Empire. We learn that Chorin, attacked by raiders and failed by both Valance and the Empire, is the home of the Hidden Hand and as the issue ends with Valance returning to the Alliance to tell them he knows the location of the Hidden Hand and the weapons, issue 6 looms.

I’m sure readers of these reviews are familiar with my enthusiasm for this title, and having made clear my appreciation for the writing of Robbie Thompson and the various artists who’ve brought it to life (a huge shout out must go to cover artist Nic Klein who has provided 6 superb covers) I’m now more than hopeful – I’m confident that the final issue will be just as satisfying. It’s a rare series that holds the attention like Target Vader has, and even if issue 6 is only able to tie up the loose ends and bring the story to resolution without knocking my proverbial socks off, I’ll take that. The ride so far has been a lot of fun.