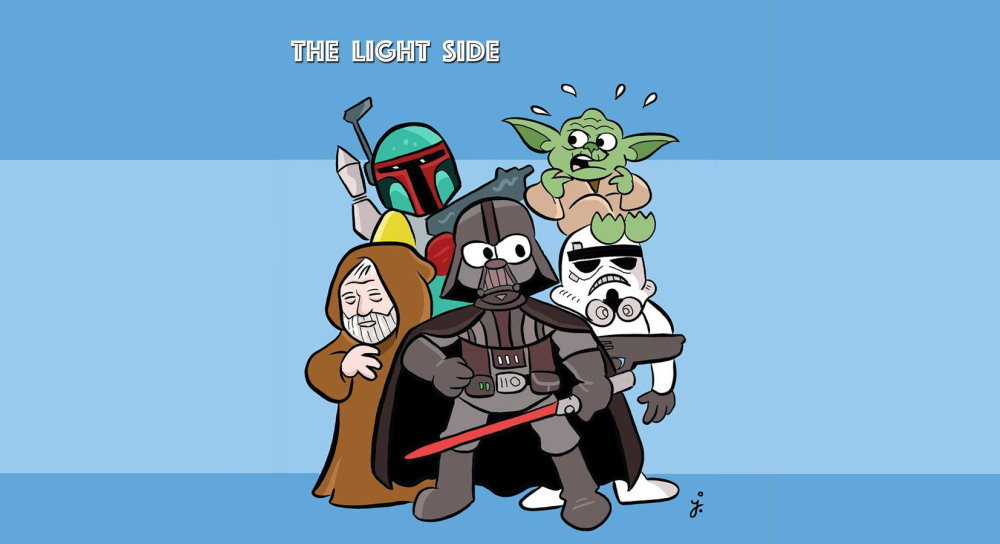 Any Star Wars fan who has leafed through a copy of Star Wars Insider magazine recently are sure to be familiar with The Light Side, the first comic strip to ever appear in the publication. True to its name, the series is indeed light-hearted and harmlessly pokes fun at some of most iconic characters in the galaxy. The creative force behind The Light Side is none other than veteran comic book artist and cartoonist Jamie Cosley.

As collectors of Topps Star Wars cards may know, this is not Jamie’s first stint at producing Lucasfilm-approved artwork. Even before The Light Side made its debut at Star Wars Celebration in 2017, Jamie had already cemented himself in Star Wars history as a Topps sketch card artist. The stark contrast in styles between his whimsical creations and the more photorealistic compositions for Topps underlines his strength and versatility as an artist.

In addition to being a talented artist, Jamie is also a down to earth nice guy. His interview is both inspirational and fun to read, from how he overcame career setbacks to become a full time artist to delivering puns in the drive-through to the dismay of his kids. Enjoy!

FT: What are three interesting facts about you that your fans may not know about yet?

JC: I draw a weekly single panel comic about a little rabbit named Hutch. It’s like The Office meets the Muppets! It appears every week in the pages of Business of Furniture magazine. I am an ordained minister and worship leader – so I can marry couples and sing at the wedding! And um… number three thing… Oh, I once did a spot illustration for Highlights for Children magazine. I was so excited to take my daughter to the dentist and find the magazine in their waiting room. I got to show it to our dentist. He thought it was so cool! 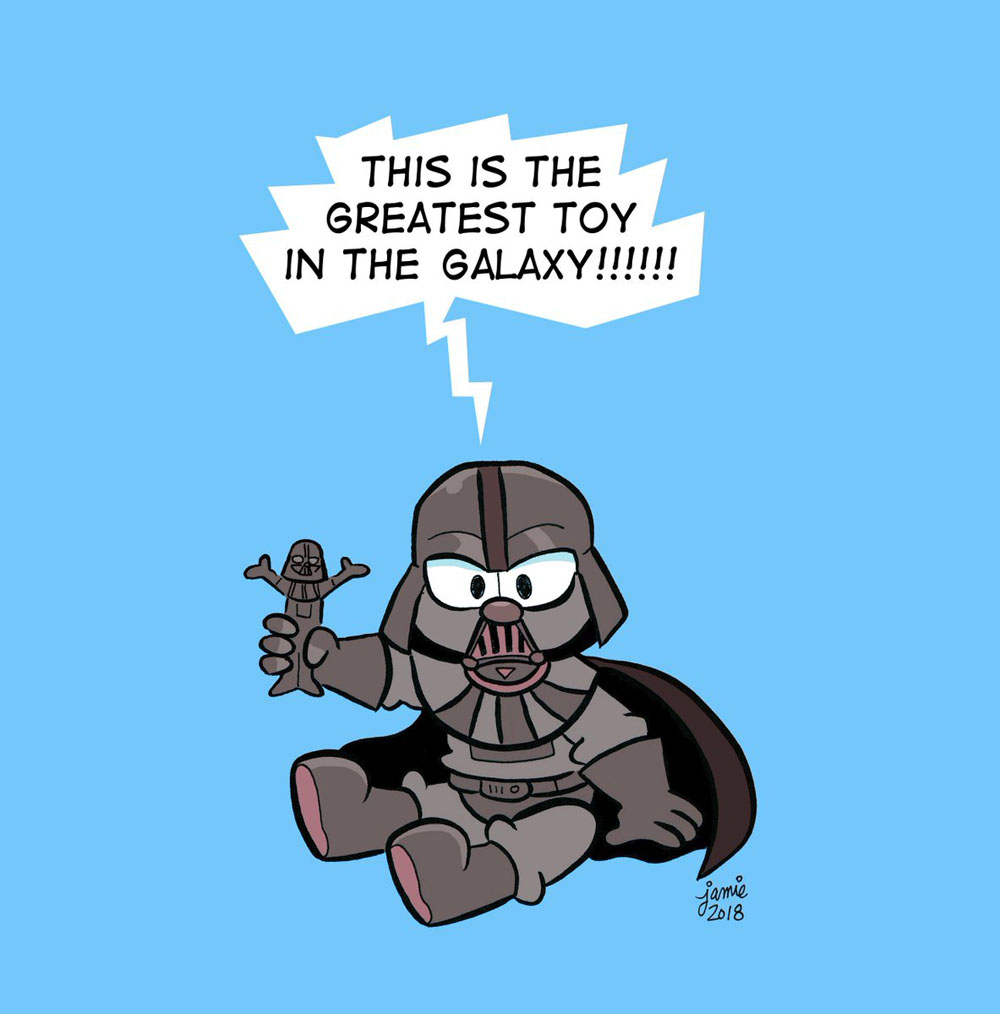 FT: What is your earliest Star Wars memory?

JC: Seeing Star Wars when I was really little, like five years old, and I remember I was so afraid of Darth Vader. Even though he’s my all time favorite character now.

FT: Was there a defining moment that made you realize you wanted to pursue art professionally?

JC: I’ve always wanted to be a cartoonist. When I was three years old, I knew I wanted to draw a comic strip for the newspapers. My mom has drawings I did when I was in second grade of Beetle Bailey, Popeye, and Garfield. It’s awesome to be able to combine those two loves with The Light Side. 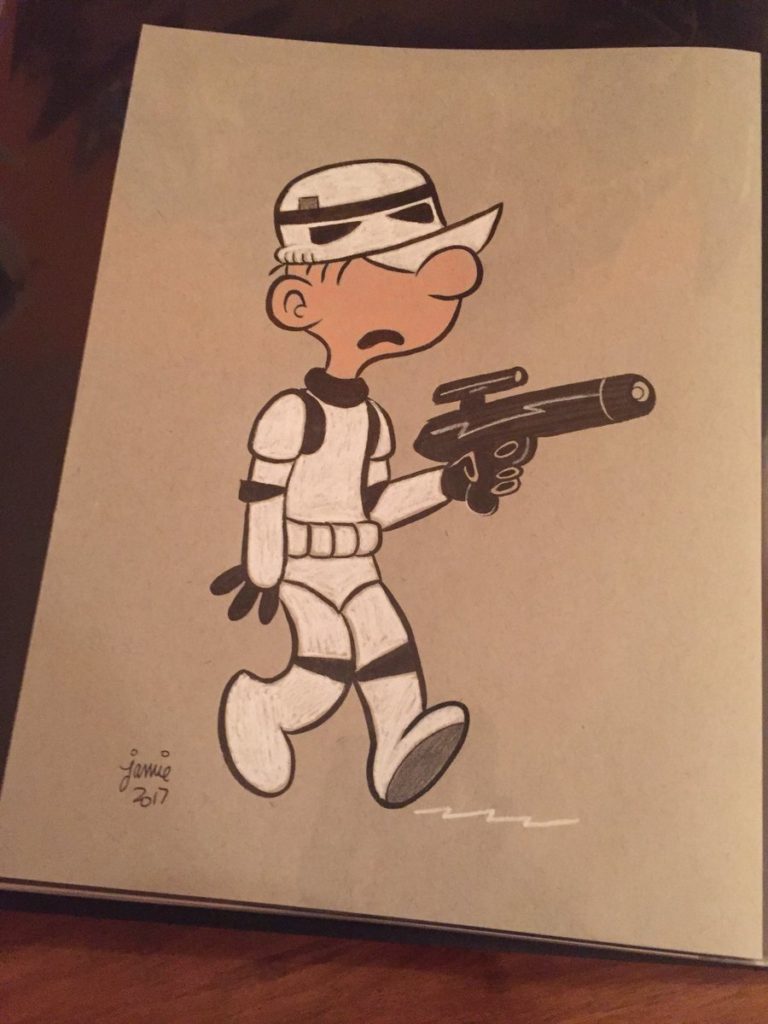 In 2008 I was a salaried office furniture salesman. When the economy took a turn for the worse I was let go. My wife and I had just welcomed our baby girl home so I ended up staying home to take care of her since daycare was insanely expensive. I started illustrating picture books for brand new authors after searching “looking for an illustrator” on Twitter. I started getting enough work to really start making a living. Not as much as the sales job, but still good. Looking back on almost ten years, it’s amazing to see how things all worked out. During our lean years, the kids and I spent lots of time at the library renting movies and books! In retrospect, we really did have some fun times and every week the Lord always provided.

FT: What artists and/or cartoons have been the most inspiring to you?

JC: Sergio Aragonés and Scott Shaw are two cartoonists I admire. I also love Bill Watterson, Charles Schulz, Mort Walker, Jack Kent, and many, many more! Growing up I loved Disney cartoons but also Hanna Barbera. I knew the Hanna Barbera quality was different but it didn’t matter to me as I loved them both equally. Mickey Mouse and Scooby Doo!

FT: How would you describe your style as an artist? JC: I think my style is more retro I guess? I try to draw like Mort Walker from Beetle Bailey. I actually kind of modeled my version of Darth Vader after Sarge. I wanted to add a little dog character like Otto, the little dog that dressed like Sarge and bossed the other troops around!

FT: You are perhaps best known as the artist behind The Light Side, a comic strip for Star Wars Insider magazine. How did it all start?

JC: I sent an email to the editor, Jonathan Wilkins. I asked Jonathan if I might be able to provide some illustrations or perhaps create a comic strip. I was very fortunate as they were in the throes of designing a new look and he asked me to provide some samples. I wrote and drew several samples but it took almost a year before they started to appear in the magazine. I remember in January of 2017, I sent an email asking him what Lucasfilm thought of the comic and he said they would begin to appear in the April issue! An absolute dream come true. I went to Star Wars Celebration that April and got to sign copies and draw free doodles for an hour at the Star Wars Insider booth. The name The Light Side came from Jonathan Wilkins as he is a big fan of The Far Side by Gary Larson. I am too!

FT: What can you share about the creative process?

JC: I usually turn in four comics at a time and then wait for them to come out. I like to stay way ahead of schedule. I usually doodle several ideas and write down certain characters that I would like to write/draw. I turn in rough drafts and then when they are approved I go to work. In the early issues, I would write gags with my buddy Russ Brown. He co-wrote some gags with me and we turned them in to the editor. Sometimes the editor will ask for a certain theme or something like that. It is such a fun process. I love it!

FT: What are the most enjoyable and most challenging aspects of drawing The Light Side? 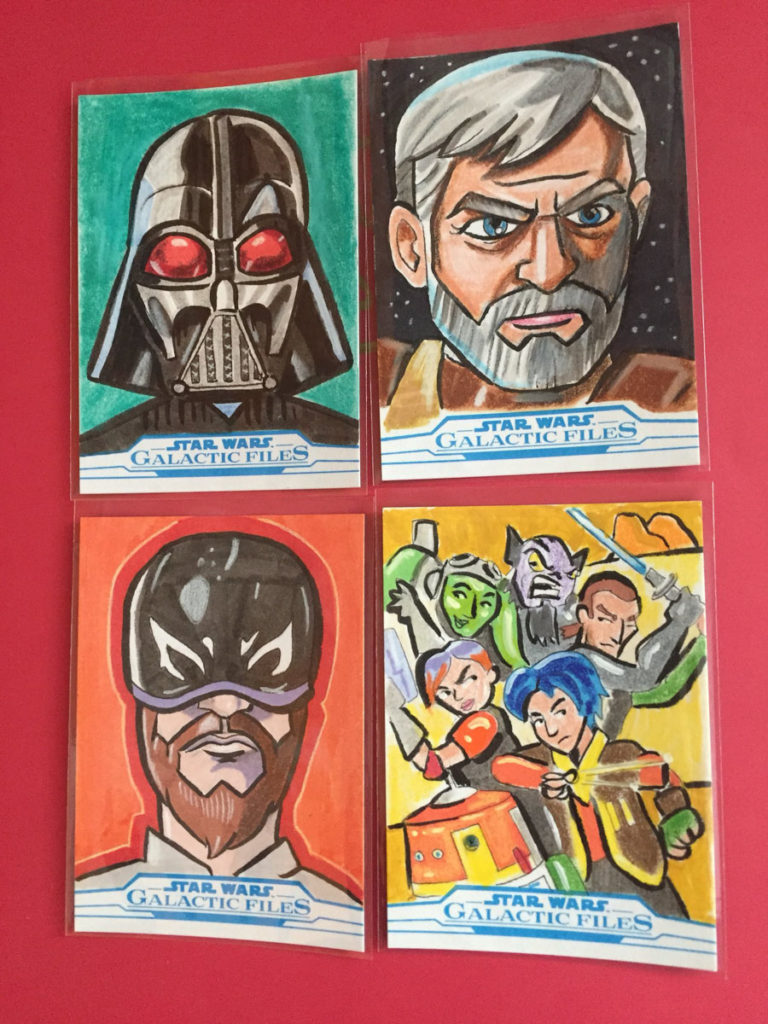 JC: I spent a lot of time on the design of Darth Vader. I wanted it to be a very unique look, so I softened him up a bit but not necessarily in a cute manner. He just has bug eyes and squishy cheeks. Sometimes it’s tough to draw him at different angles.

FT: In addition to The Light Side, you are also a Topps Star Wars sketch artist. What can you tell us about that?

JC: When I first started working for Topps drawing Star Wars sketch cards in 2015, you were able to draw cartoony. That’s when I drew bug-eyed Darth Vader for the very first time. After a while, Disney changed the rules so all drawings needed to be more photorealistic. It has pushed me as an artist but I love Star Wars so I’ve adapted my style to still be a part of the sets that come out.

FT: What is your proudest moment as an artist? 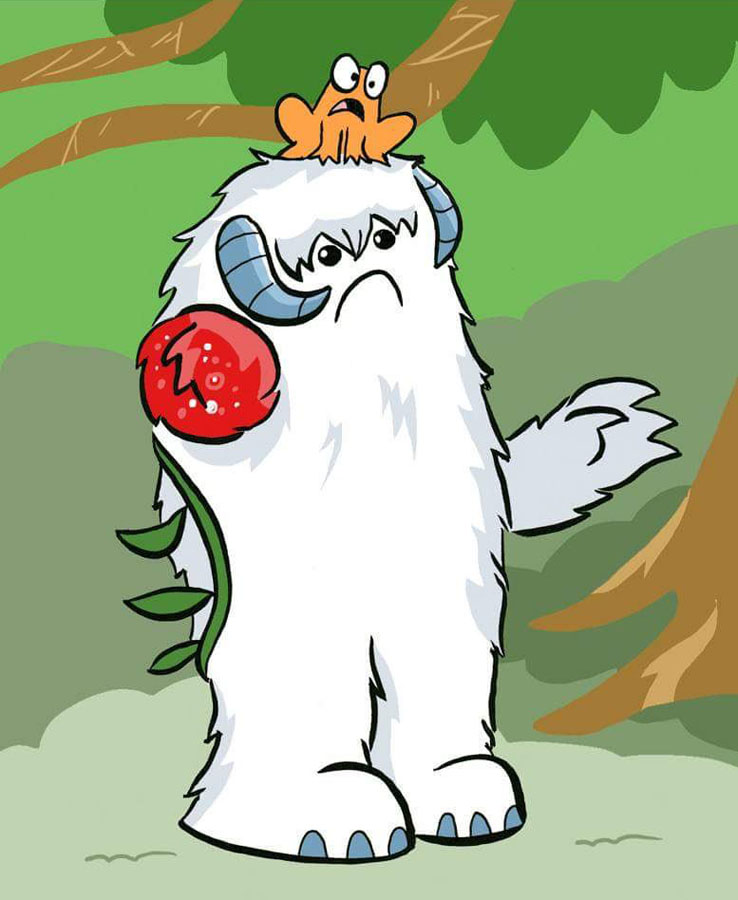 JC: Definitely The Light Side comic. I drove my kids nuts when the first issue came out. I tried to insert my big news into every conversation. At the McDonald’s drive-thru: “Sir, your first order was..” Hey, speaking of The First Order, you know I’m drawing a Star Wars comic strip now?

FT: What is the most valuable piece of advice you’ve received that you can share with aspiring artists?

JC: To avoid the comparison game. It can really mess with your mind. It’s even tougher now with the internet and people will share their news and if you don’t have anything going on at the moment, it can really bring you down. Stay positive and keep creating! Your time will come! And pray. You know, if you’re the praying sort. That always helps me!

FT: Last but not least, what is your dream goal as an artist? 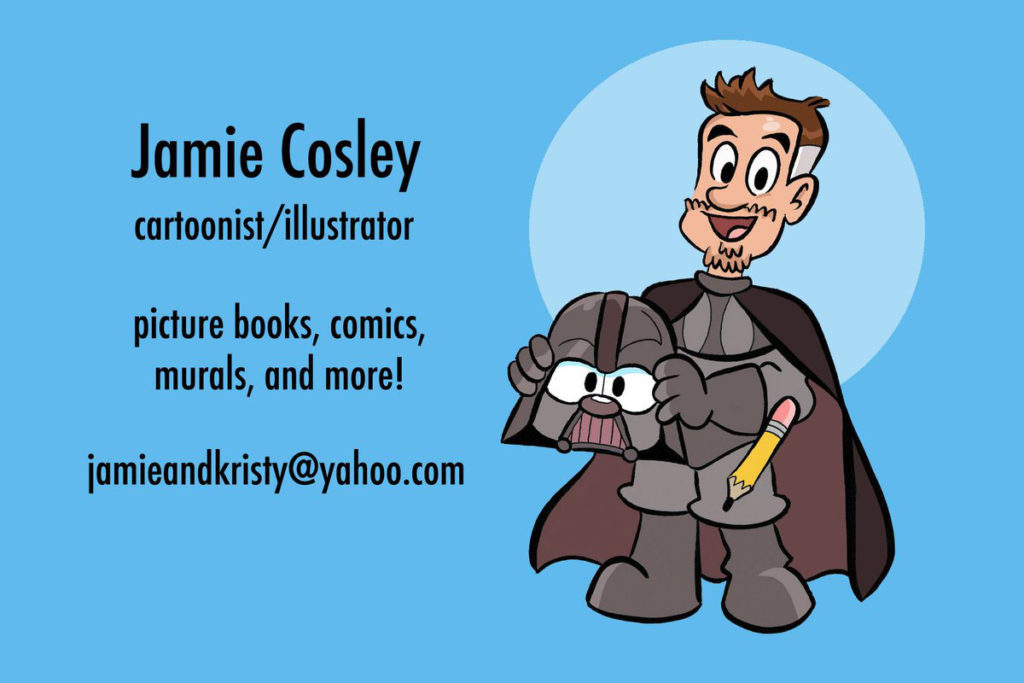 JC: I would love to draw The Light Side comic forever… And maybe have them all collected into a book? And maybe have Gentle Giant create a toy based on my design of Darth Vader. That would rock! Or a plushy! Also, final note: I sometimes draw a tiny orange frog that appears in the comic from time to time. His name is Opie Starhopper and he escaped from Jabba’s Palace. You know, unofficially… but in my mind it’s canon!

Jamie Cosley is a Cartoonist, a Comic Book Artist, a Musician who sings in a band, a Christian, a Husband and a Father.