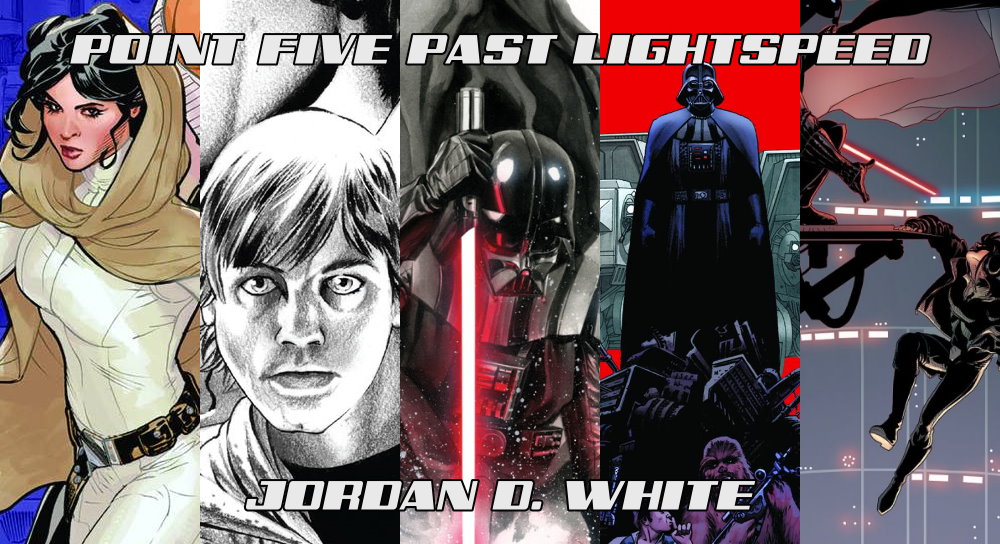 Welcome, you’ve just made Point Five Past Lightspeed and that means you’re about to learn five things about our latest special guest. This week it’s the former editor of the Marvel Star Wars line, Jordan D. White.

FT: So, five great moments from the first year of the new Marvel Star Wars era. Shouldn’t be too hard.

JDW: This is incredibly tough, because EVERY issues we do is packed full of moments I love. For every one I’ve put down here, I can think of five or six others I feel bad leaving out. So I may have cheated and thrown a few extra moments in there. That’s cool, right? Oh, and these are just from the recent Star Wars books—I’ve never read the original Marvel run. I know, I know…a huge hole in my Star Wars education… 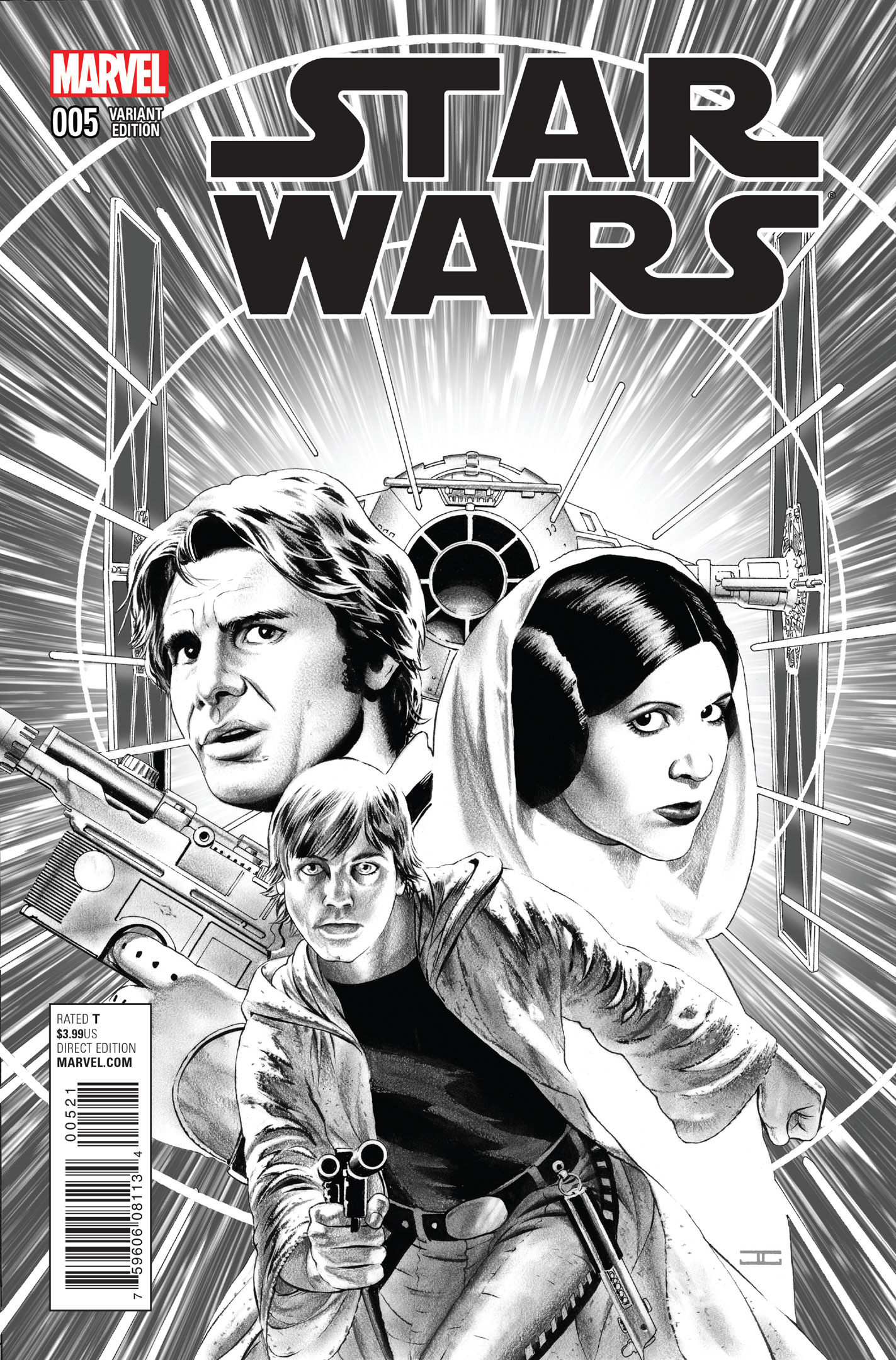 JDW: Han screws up the mission, Star Wars #5 – I remember reading the script for this scene—in which Leia is about to successfully sneak past an Imperial blockade with stolen codes and Han brashly takes the controls and blows it—and loving it SO MUCH. I love Han Solo as much as anyone…but one of the things I love about him is that he messes things up more often than not—he’s just very charming as he weasels his way out of it. In addition, Jason Aaron is at the top of his game writing pitch-perfect Han/Leia bickering. Is it any wonder Leia throws wine in Han’s face in issue 6? Wait…is issue 6 out yet?

The runner up for my favorite moment in issue 5 is the poor, tortured denizen of Tatooine confessing to Boba Fett that people used to call Luke “Wormy”. This is a nod to a detail from, I believe, the original novelization of Star Wars as well as the audio plays. Jason Aaron put that in just for me because I wanted so desperately to make that remain canon. 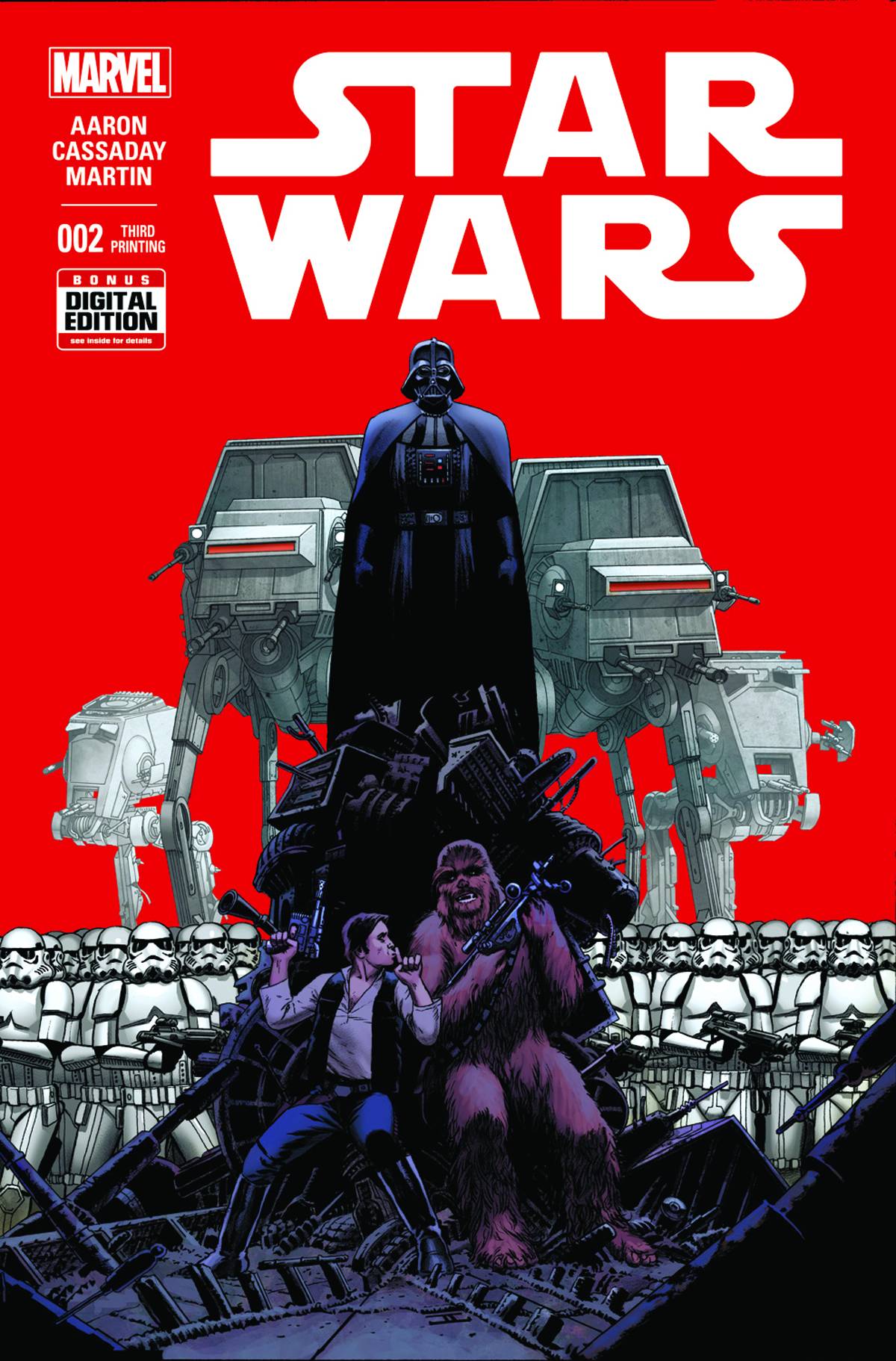 FT: Your next choice focuses on a very particular and fussy protocol droid.

JDW: Threepio drops the gun, Star Wars #2 – I make no secret about the fact that C-3PO is my favorite Star Wars character, despite the fact that many people think I should be ashamed of myself. I think he is a terrific character…he’s a bit of a coward, he’s tremendously put upon, he doesn’t really want any part of the adventure he finds himself caught up in. As far as I can tell, he’s spent the large bulk of life completely out of place—he’s a protocol droid built by slaves who then moved to a farm. Is there a lot of call for protocol in those situations? Anyway—Jason Aaron proved beyond any doubt that he knew Threepio well when Han harangued him into taking up a blaster in defense of the Falcon…and Threepio dropped it about ten seconds later. Poor guy.

Runner up moment from this issue…well, if I wasn’t such a sucker for Threepio, I think the obvious incredible moment from issue 2 was Darth Vader just ripping the lightsaber out of Luke’s hands with hardly no effort at all. So shocking, but so obviously, yes! That is just what he would do. 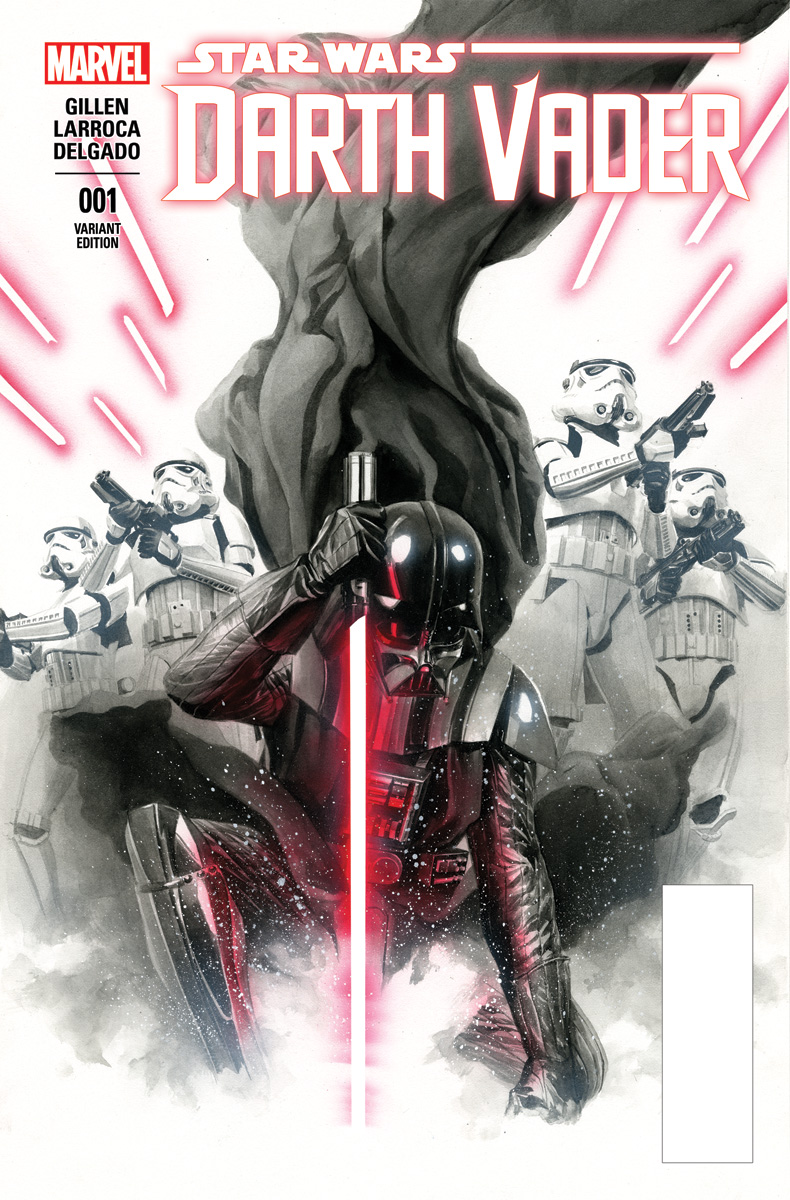 FT: Your next choice focuses on the guy who built Threepio in the first place.

JDW: Vader kills Sand People, Darth Vader #1 – One of the things I love so much about the Darth Vader series is how much it does to weave together the Original Trilogy and the Prequel Trilogy. For the entirety of the PT, we get to see things from Anakin’s point of view, whereas in the OT, Vader is the mysterious enemy. With this new series, Kieron Gillen gets to get inside the head of that evil and as a result we can see how the events of Anakin’s life still inform everything Vader does. The last splash of Darth Vader #1 shows us that years may have passed, but back on Tatooine with some time on his hands, Anakin still has not forgiven the Tusken Raiders for the death of his mother. A brutal and revealing moment.

Of course…how can I talk about Darth Vader #1 without acknowledging the awesome opening scene of Vader walking into Jabba’s palace and demanding audience? This scene was literally one of the first things we talked about when Kieron, Jason, Axel Alonso, CB Cebulski and I first got together with the Lucasfilm Story Group to discuss ideas. 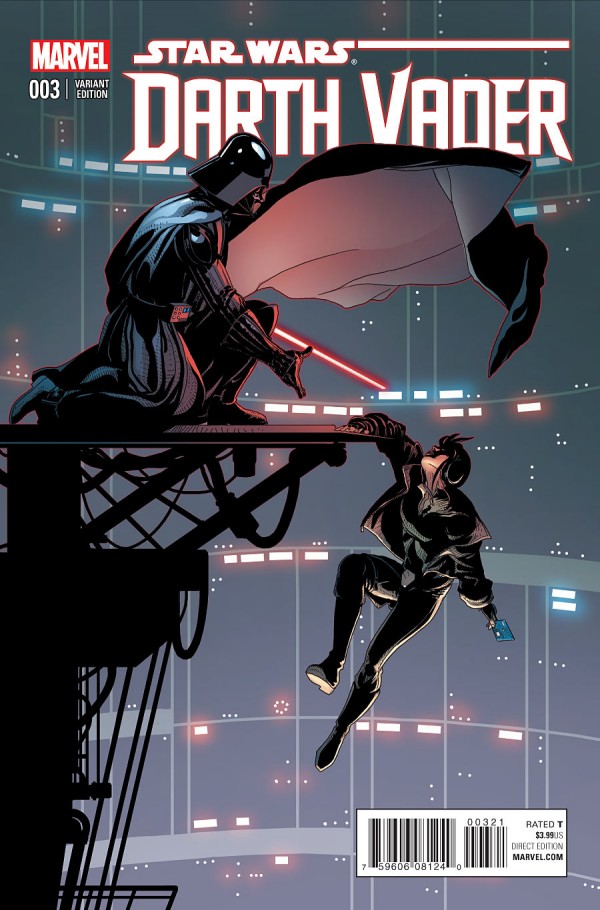 FT: The series has given us a great insight into Vader’s secret machinations away from the eyes of the Emperor and your next choice reflects that.

JDW: Vader gets a crew, Darth Vader #3 – Obviously, one of the challenges of having Darth Vader as your protagonist is that he’s not exactly a wordy guy. He plays his cards pretty close to the vest, and doesn’t do a lot of thinking aloud. We knew we would need to give him a good supporting cast to help carry the story…and man, oh, man, do I love what Kieron came up with. First off, Doctor Aphra, a “Raider of Lost Weaponry” whose entrance took some inspiration from another Lucasfilm project. Her talkative and playful nature is a great contrast to Darth’s. Then we have the “murderbots”: evil protocol/torture droid Triple-Zero and Blastomech BT-1. They’re pretty clearly a dark mirror of Threepio and Artoo…but they are already becoming fan favorites. These characters make being bad look so much fun. 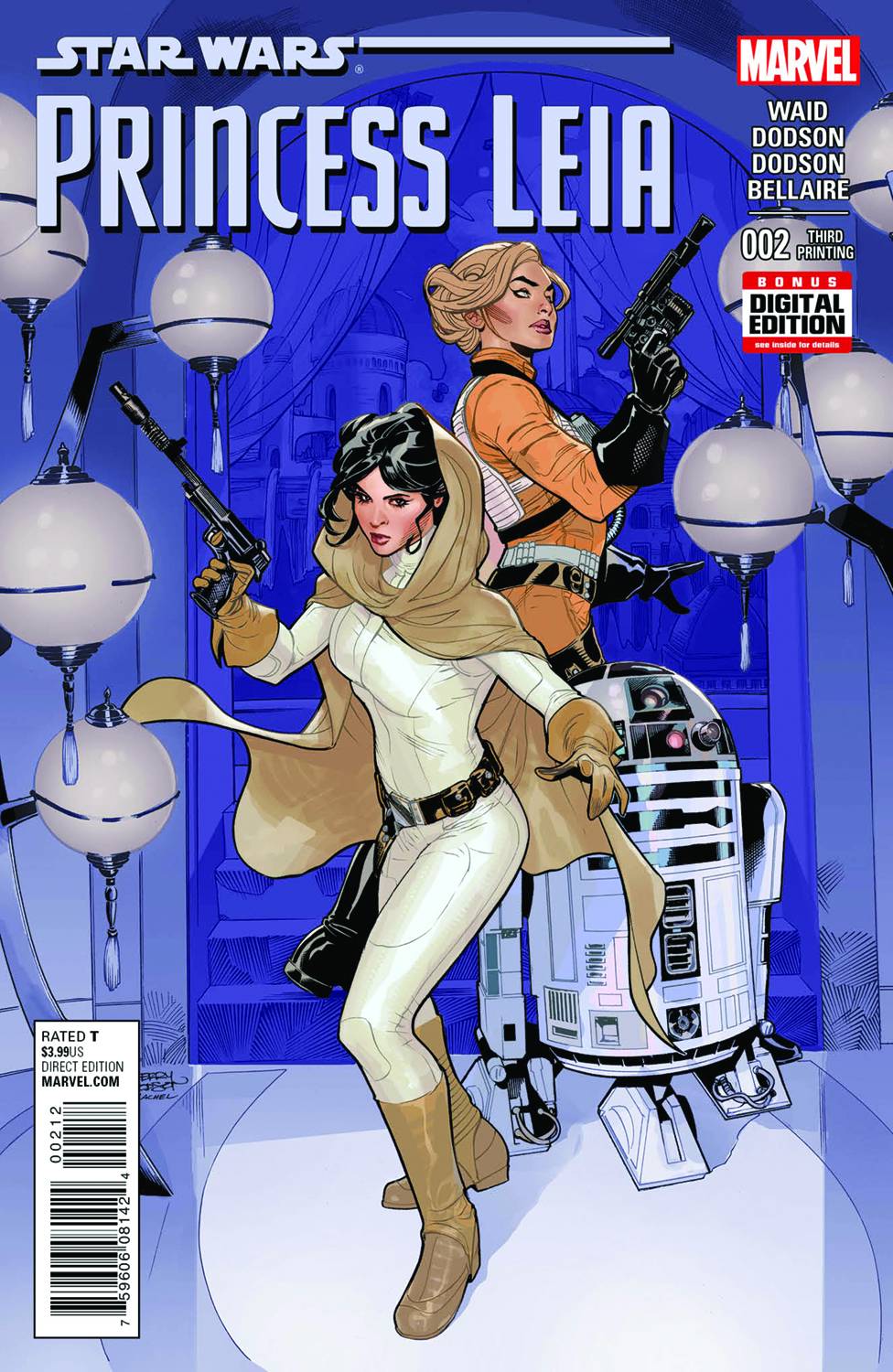 FT: And finally an emotional moment for the last daughter of Alderaan.

JDW: Leia sees her mother, Princess Leia #2 – A lot of people called out this moment as a really great one, and I am no different. While on Naboo trying to rescue Alderaanian survivors, Leia passes by a stained-glass window depicting former Queen of Naboo, Padmé Amidala. Of course, Leia has no idea that Padmé was her mother, but somehow, be it the will of the living force or just a coincidence, Leia sees the image of her mother turn her head and look to her, sadly. Sly readers realize this is a nod to what Leia says to Luke about her memories of her mother in Return of the Jedi. It’s a beautiful moment because…well, it’s sad that Leia and Padmé never got to meet. I think a lot of people would have liked them to be able to know one another.

Actually, my second favorite moment from this issue also had to do with a parent of Leia’s—her adopted father. The flashback to young Leia not wanting to eat her vegetables until Bail Organa teaches her that…well, he sort of makes it her responsibility to her people as a princess to eat her vegetables, which is both a great lesson about her place in Alderaanian society and an awesome way to convince a kid to clean their plate. Mark Waid nailed it.