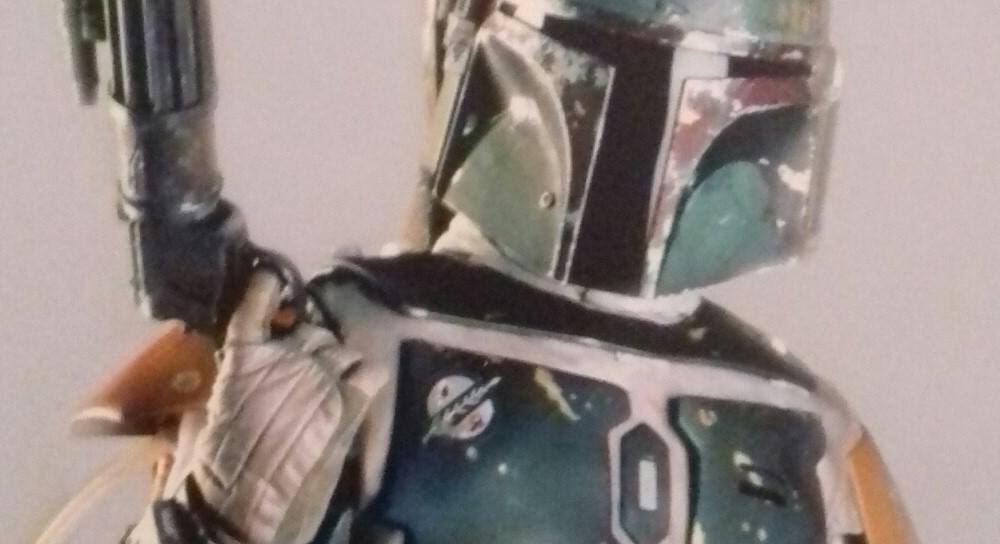 Welcome to the second in a series of recollections from Fantha Tracks contributor Paul Naylor. In this memoir, Paul recounts the trials and tribulations of collecting autographs of our favourite heroes and villains.

By mid to late 1979 I had collected all of Palitoy/Kenner’s first 12 action figures from Star Wars and the second wave. The Empire Strikes Back had been teased in grainy black and white photos in the Sunday tabloids and I remember seeing a picture of Chewie – with a dismembered C-3PO on his back – throttling a mysterious moustached newcomer called Lando as Leia looked on.

In another photo there was a strange looking character with an almost medieval knight’s helmet. Around the same time, an action figure send away was advertised in Star Wars Weekly. This would be the first of such offers to come over the years.

“Boba Fett fights for the highest bidder, but he’s yours for free”, the advert stated. It was a cool advert and the figure was even cooler. Fett was the first multi-coloured action figure and stood out from the rest – much like the villain himself. 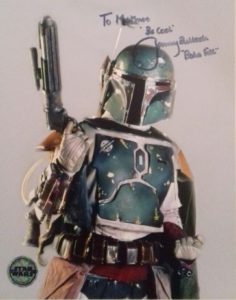 One year on from meeting Warwick Davis at Telford’s popular convention centre, my son Matthew and I joined the queue as the county of Shropshire was once again besieged by all manner of geeks and cosplayers. This time we had a very definite purpose – Boba Fett was in town.

Ever since those fleeting moments in 1980’s The Empire Strikes Back (Or his cartoon incarnation in the much-maligned Holiday Special if you prefer) the most badass of bounty hunters has been revered. And now he was visiting my county? This was going to be a real treat. 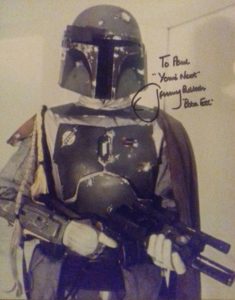 By February 2013, Matthew, then aged 9, had become a huge fan of the mysterious Fett. I’d always been a massive fan of the bounty hunter myself. The apple doesn’t fall very far from the tree as the saying goes. 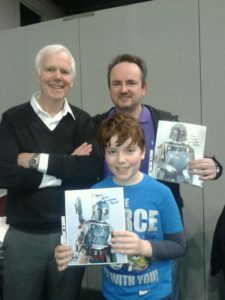 Following a brief wait in line we came face to face with the actor most linked to Fett. Jeremy was about as far removed from the mean and moody character. Fett may have the vocabulary of a pull-string toy, but Jeremy was an absolute joy to meet. We chatted for a good 10 minutes about his time on set and the joys of being associated with the franchise.

He pointed out to Matthew that he was Imperial officer Sheckil escorting Leia and co through the corridors of Cloud City while also playing Fett in the accompanying scene.

He was very keen to talk about his prequel appearance as Captain Colton, piloting the Tantive III in 2005’s Revenge of the Sith. “You see my face and hear me speak at last,” he beamed pointing to a 10×8 photo of him at the helm of a hammerhead corvette.

As nice as it would have been to have Mr Bulloch’s signature on a picture of Sheckil or Colton, both Matthew and I chose a different image of Boba – mine from Empire, my son’s from Jedi.

Jeremy’s wife Maureen was on hand to do the admin that day and having waited for the ink to dry she slotted the signed pictures in transparent sleeves for safekeeping. She even took the photo of Matthew and me with Jeremy holding the autographs. Nice one Maureen. Please don’t ask me what was going on with my hair that day!

Boba Fett’s signature for Matthew is unique in his collection as it is signed to Matmoo, a nick name of my son at the time. I have asked Matthew if he wants to replace it more than four-and-a-half years down the line but whilst he no longer goes as Matmoo it is a unique time capsule from a memorable day.

Jeremy Bulloch remembered in the end credits of The Mandalorian

John Morton remembers Jeremy Bulloch: “Jeremy will ever be beloved”

There are Star Wars stars aplenty involved with Fortitude of Empires