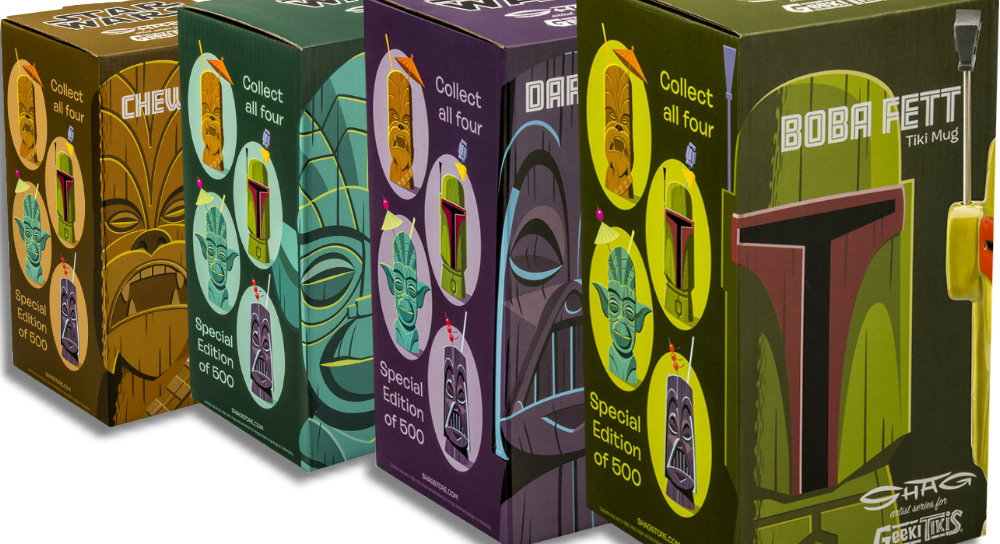 Beeline Creative’s Geeki Tikis line roll out four new mugs, and president and founder of Beeline Creative Brandon Giraldez and artist SHAG chat with StarWars.com about what influenced them to create these stylish new releases.

StarWars.com: Do you have a favorite character, planet, or vehicle?

Josh Agle: I find myself leaning towards A New Hope because that’s the one that just had so much impact on me. So, Tatooine is sort of the ultimate Star Wars planet. You got the Jawas, Tusken Raiders, the whole Skywalker family, Obi-Wan, all there on that desert planet. That to me is my favorite Star Wars environment. 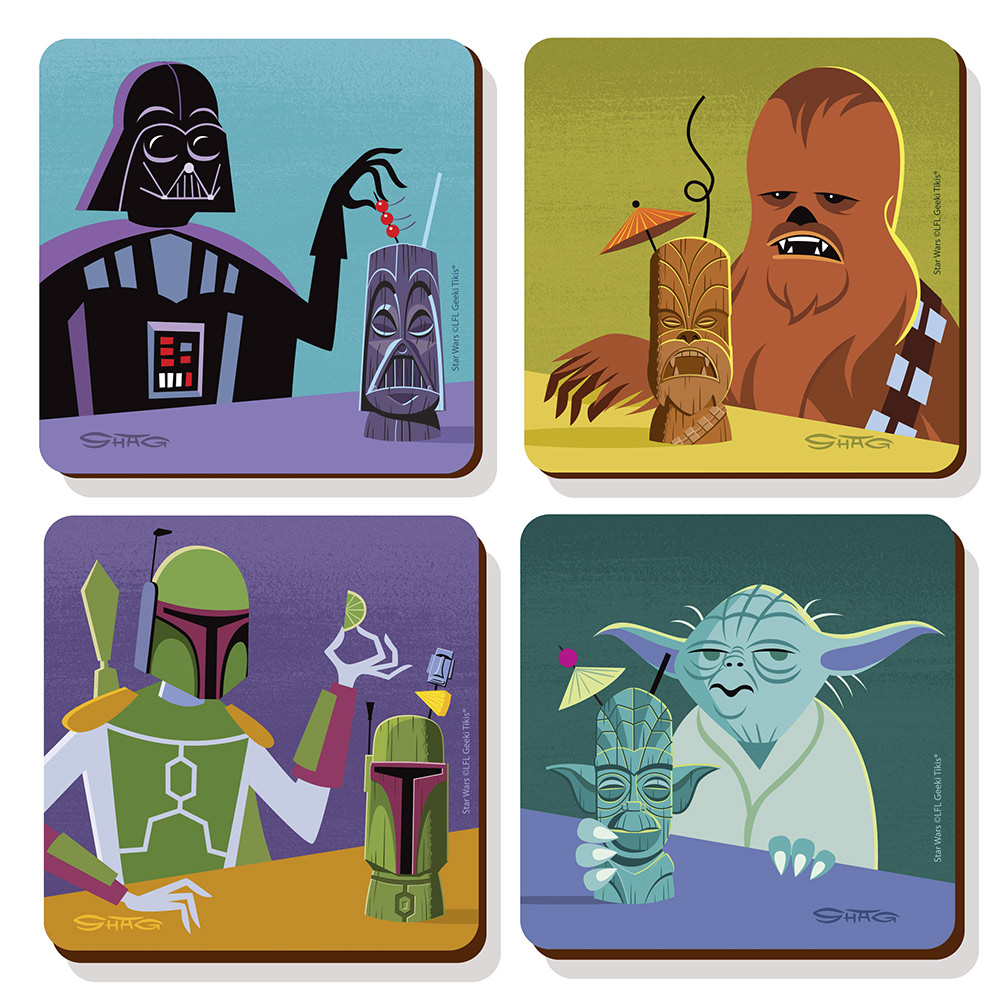 Brandon Giraldez: For me, I’m more of an Empire Strikes Back guy. There’s just so many characters and locales that were introduced for the first time: Yoda, Cloud City, Dagobah, tauntauns, wampas. There was just so much going on in that movie, it’s just still my favorite Star Wars movie.

Josh Agle: I’d like to add that I had the surprise of Vader being Luke’s father ruined for me. Spoiler alert: some kid told me. [Laughs]

StarWars.com: Oh no! I grew up a lot later after the films came out so for me, it was just like a fact of life that you knew. Like the sun is yellow, the sky is blue, Vader is Luke’s father. I don’t even remember being told that.

So pivoting slightly, how do you approach tiki design? What are some essential style elements or techniques?

Josh Agle: It’s probably a little different for Brandon than it is for me. When I’m designing a tiki it’s gotta be symmetrical down the middle, it’s gotta be based on a pole, it’s gotta be a round, tall cylinder, because the original tikis were carved out of palm tree trunks. I generally put a little bit of wood graining in mine so it looks like natural material. And for the way it’s carved, it’s kind of a primitive carving style so you can’t get super-detailed because they were just using lava rock axes and things like that to carve them originally. So, you have to hold yourself back sometimes and think, “How would a Pacific Islander carve this out of a palm tree?” That’s where my mind goes. 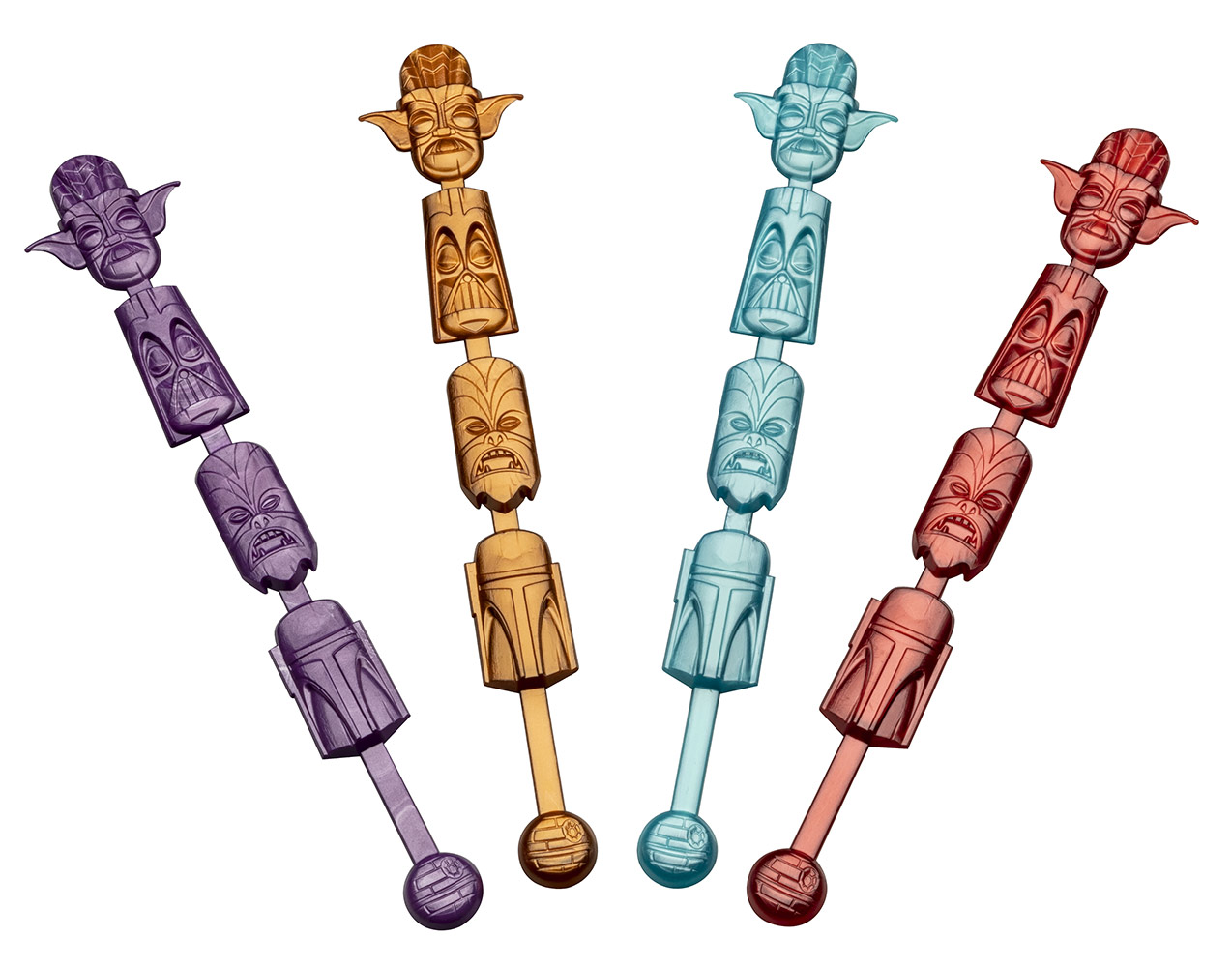 Brandon Giraldez: When it comes to tiki, what we do is infuse it with pop culture. So we take those key elements of say, Vader’s helmet and his chest plate, and then we reference tiki statues, carvings, the like, and infuse all of those elements together. So sometimes it’s the posture that they’re in, or the wood grain, or the colors that make it tiki. I would say it’s a combination of taking bits and pieces from traditional tiki and Polynesian culture and infusing it with the hottest pop culture characters on this planet. [Laughs]