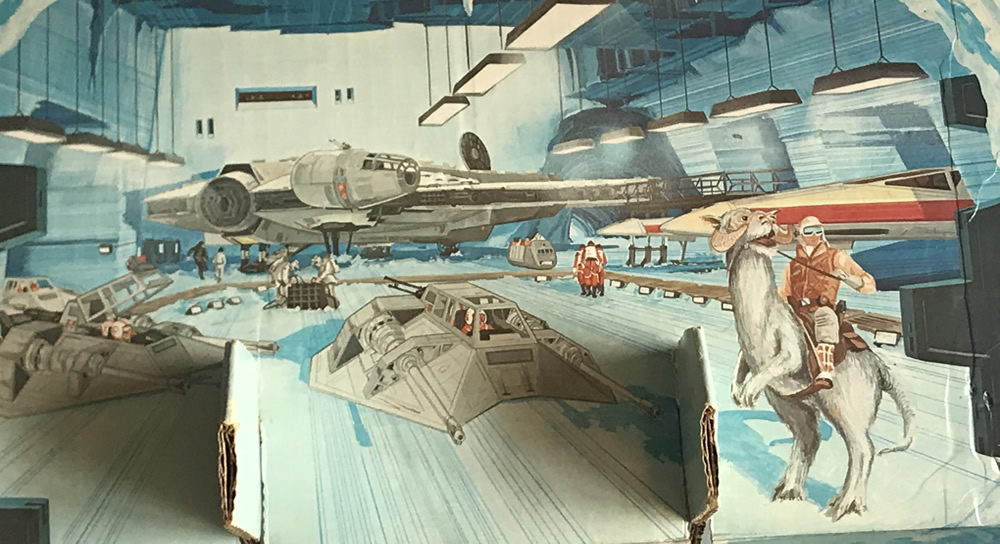 As most of my friends know, I’m not a huge fan of a lot of the generic movie still artwork out there found on cardbacks, boxed vehicles and other products, and don’t get me started on anything from modern releases! However, I am a huge fan of artwork created from scratch, specifically for individual products such as the Dixie cups and MPC model kits.

Yesterday marked a great day for me. I met up with fellow collector Mark Daniels, also known as SublevelStudios, and we headed off to a local auction house. Browsing the contents of the lots I spotted the last playset I was missing to complete my run – the gorgeous Cloud City Playset. They command high prices in today’s market and are rarely  found in good condition.

Rather than just show off this one purchase I thought I’d talk about all three of the Sears exclusive playsets featuring backdrop art and encourage readers to try to hunt them down too. 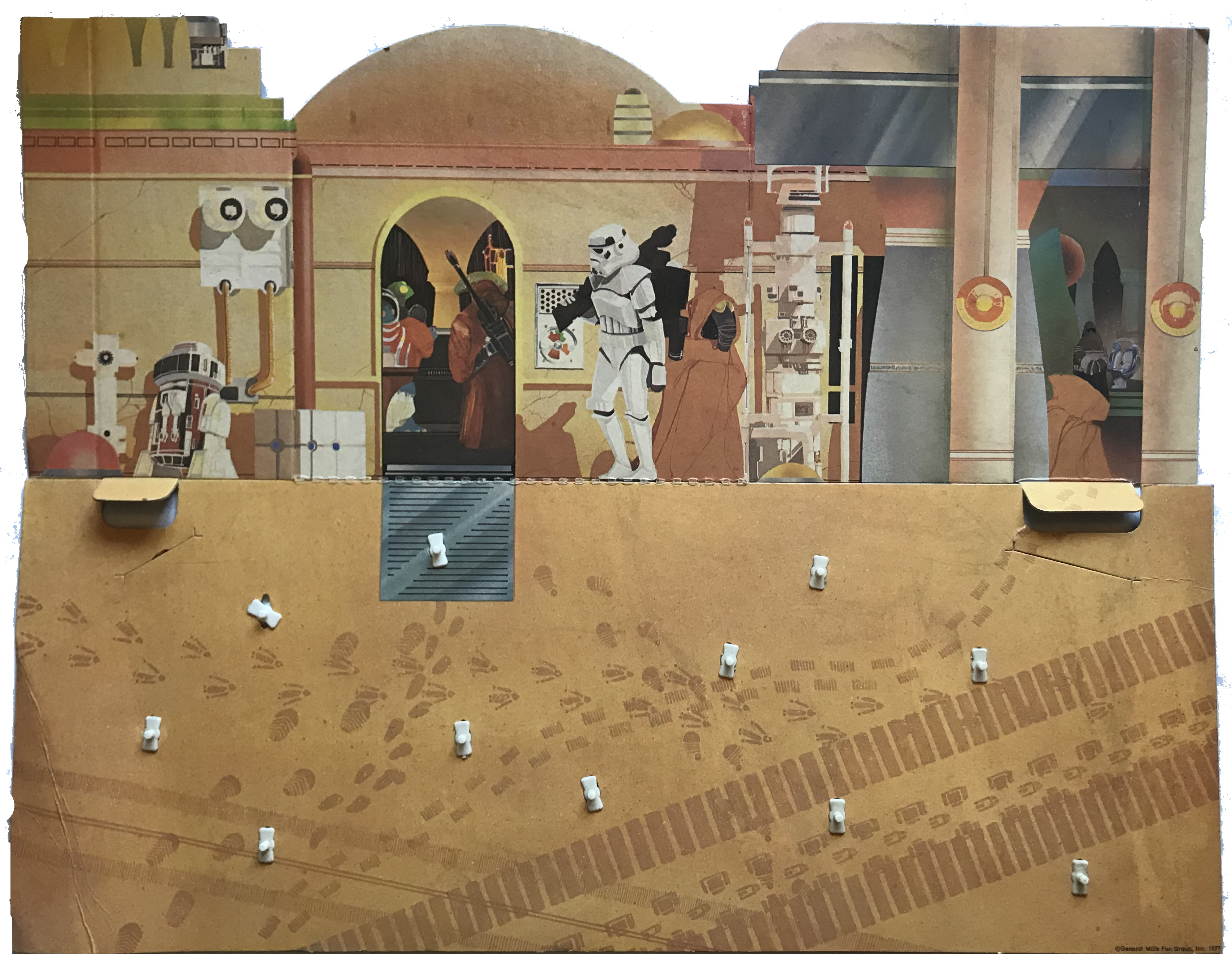 A very cheaply produced cardboard backdrop featuring footpegs for 11 figures – very clever, gotta collect them all. Although I wonder why 11 and not 12? Perhaps it was never envisaged that Princess Leia would ever be seen at such an establishment?

Although playability is very much limited the artwork is fantastic and the foot / paw prints and sandcrawler treads give it a nice touch, a precursor to the Land of the Jawas playset which came the following year and used a similar effect. 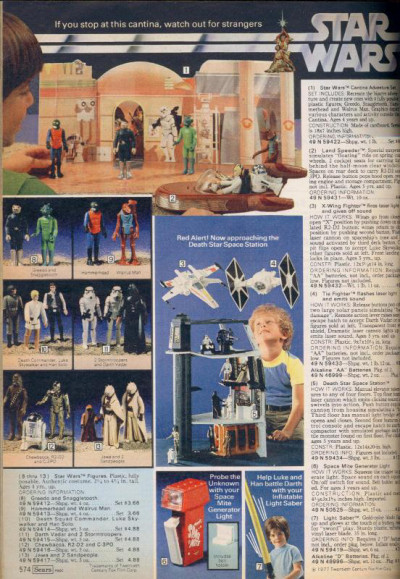 The Cantina Adventure set first appeared in this advert from the 1978 Christmas catalogue (or wishbook as Sears names it).  The most noticeable item from this page clearly being the Blue Snaggletooth which are fairly valuable despite not being all that difficult to acquire.  The origin of the Blue Snaggletooth is shrouded in speculation ranging from an error made from creating a character from a black and white movie still to a deliberate choice to make the red Snaggletooth later as seen on The Star Wars Holiday Special.

“If you stop at this cantina, watch out for strangers!”

The 1978 version of the Cantina adventure set included Greedo, Blue Snaggletooth, Hammerhead and Walrusman all in these SW-C style baggies. 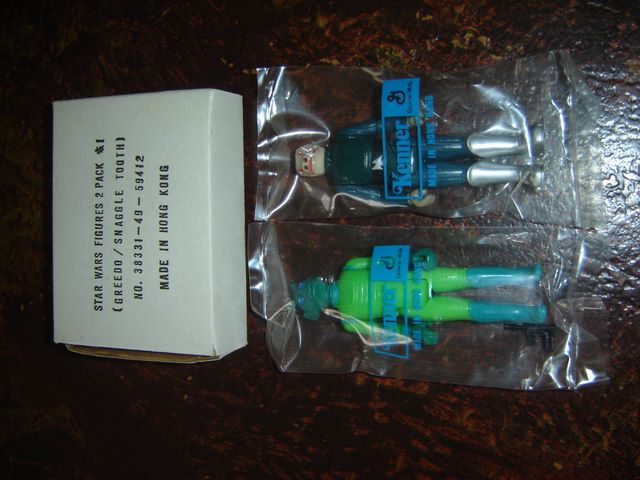 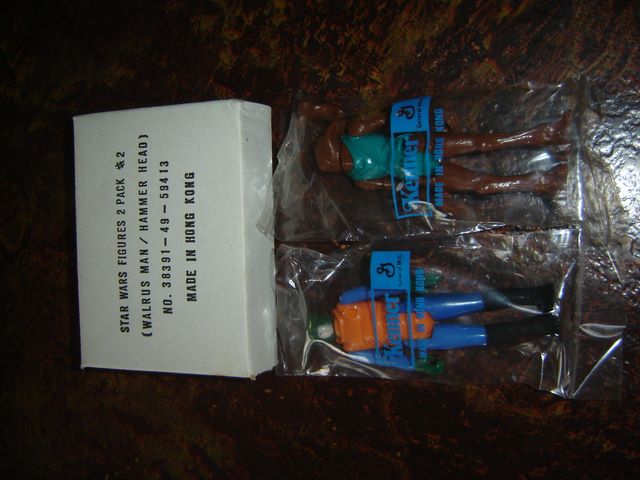 Note – Sears released a lot of multipacks including a Blue Snaggletooth independent of their playsets.  Check out this awesome article on theswca to read more. 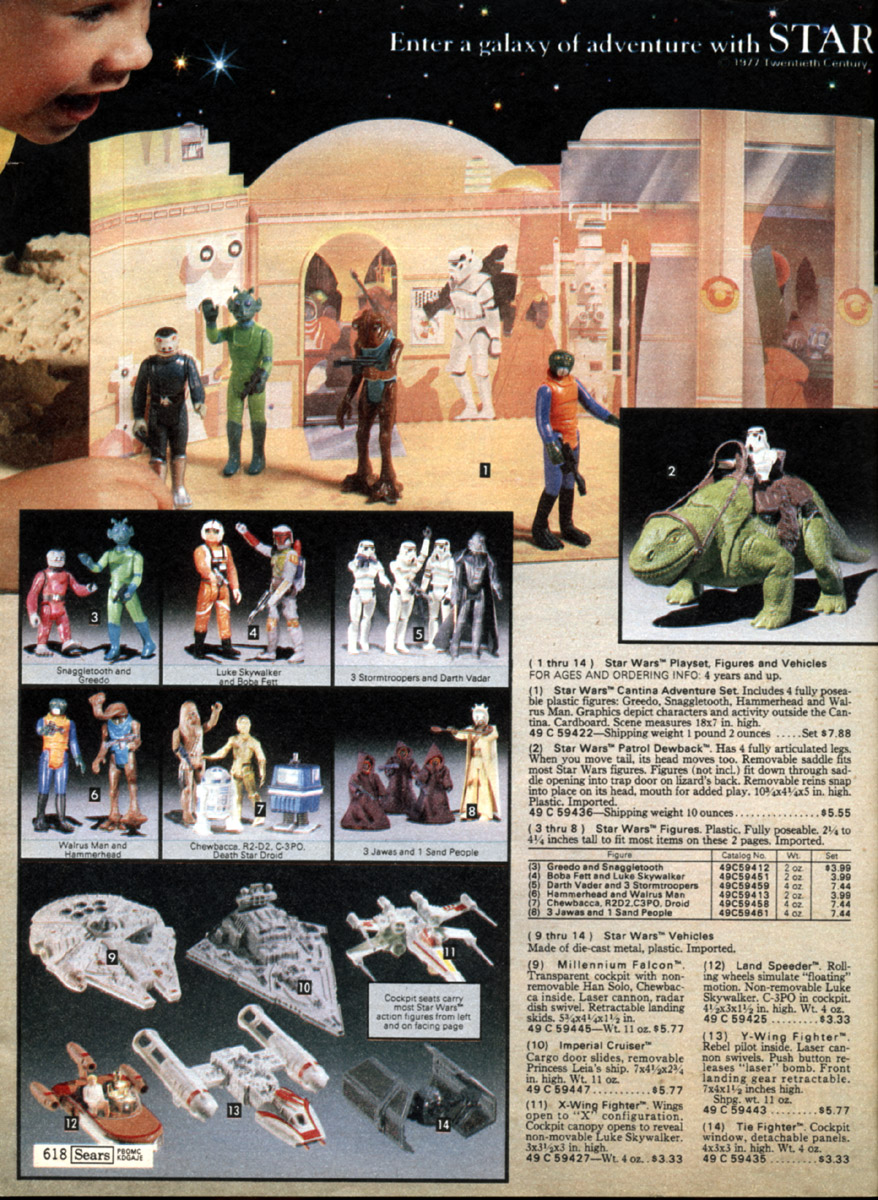 Although I think the above advert is amazing I probably prefer this one from the 1979 wishbook more.  It’s a better shot, still includes the Blue Snaggletooth which was mostly replaced by the red one by this time, and includes some fantastic mailaway offers. Three Jawas and a Tusken Raider? I can hear the howls of disapproval from my parents right now as there’d be zero chance I’d ever be able to buy the same toy twice.

It’s nice to see the diecast appearing at this time too as I have a lot of love for that line.

For $8.77 a cardboard display including 4 Action Figures seems a bargain – little did they know! 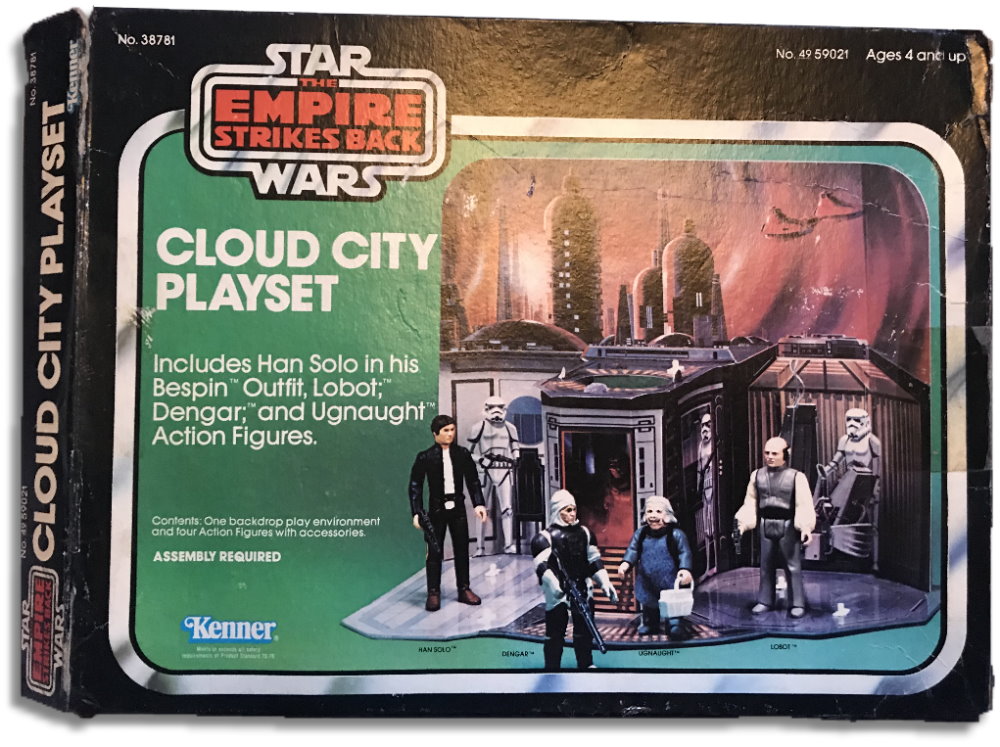 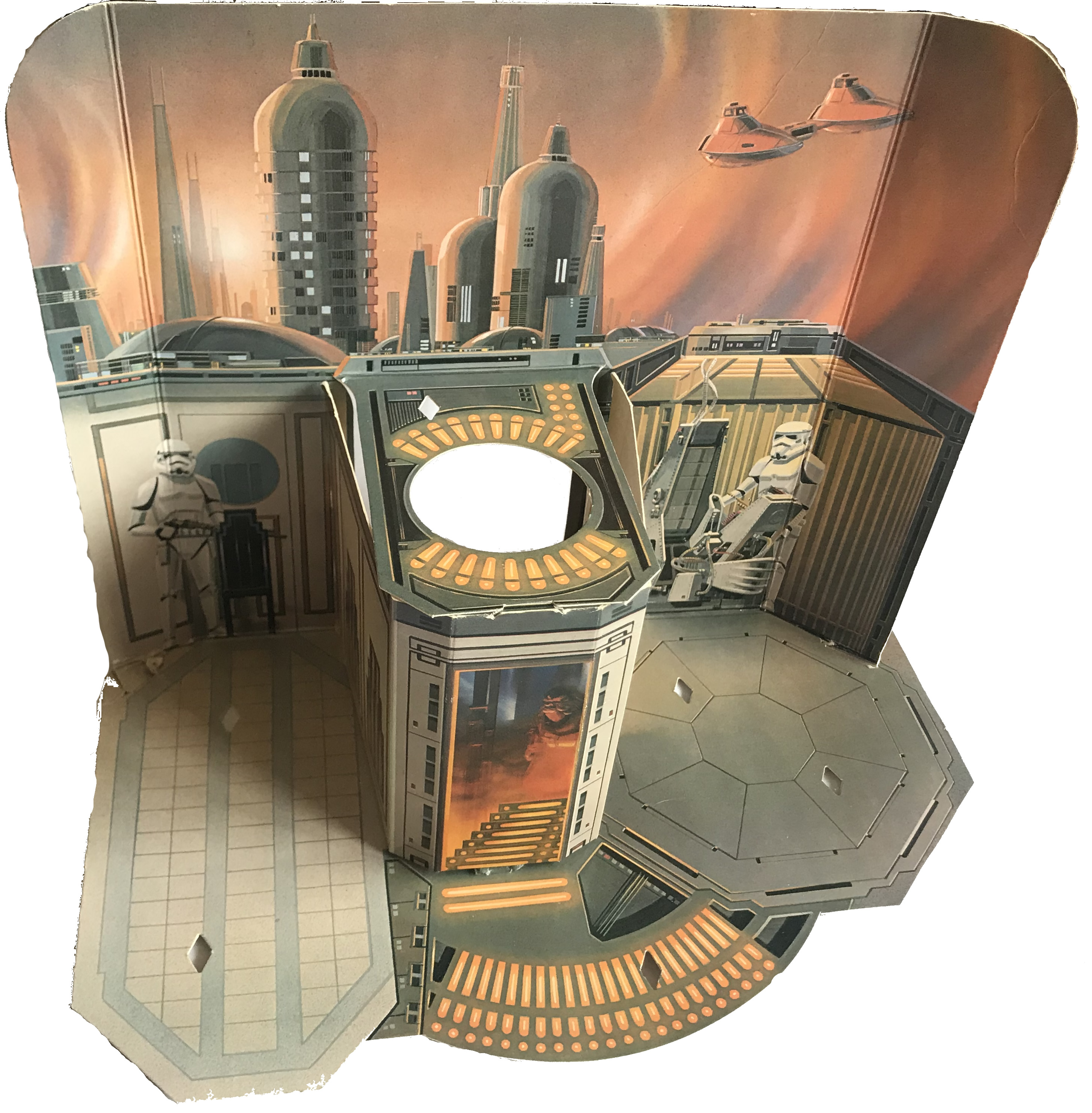 Sales of Star Wars products must have given Sears confidence in order to release a second playset, although this one has way more play value.  I love this playset as it is very much something akin to what Palitoy would have done – a cheaply produced set which still allows kids to act out scenes from the movies.

Although we still have footpegs (6 this time, so that’ll be 1 for each figure in the set, 1 to replace the missing one from the earlier  Cantina set and an extra 1 as an apology for missing the first one) this is much more than a display stand.  We have two landing areas, perfect for those diecast vehicles as seen in the 1979 Sears Wishbook and a Carbon Freezing Chamber!  Ok, so it’s a hole but my childhood’s imagination would have totally bought that concept. 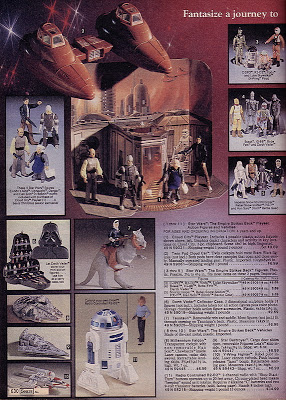 The 1980 wishbook advert is another masterpiece featuring more multipack offers.  Look at the Cloud Car bearing down on the set just like in Empire.

This set featured 4 action figures: Han Bespin, an Ugnaught, Lobot and …. Dengar.  The first three I can understand but Dengar?  He never even set foot on Bespin.  Yes I know, literally nobody did as they were floating on Cloud City but you know what I mean.  At least the Canadians included Boba Fett in their version of the playset – I would even have taken the Han in Carbonite block from Slave One over a Dengar.

The 4 action figures again came in a white box and this time were released in ESB-D style baggies. 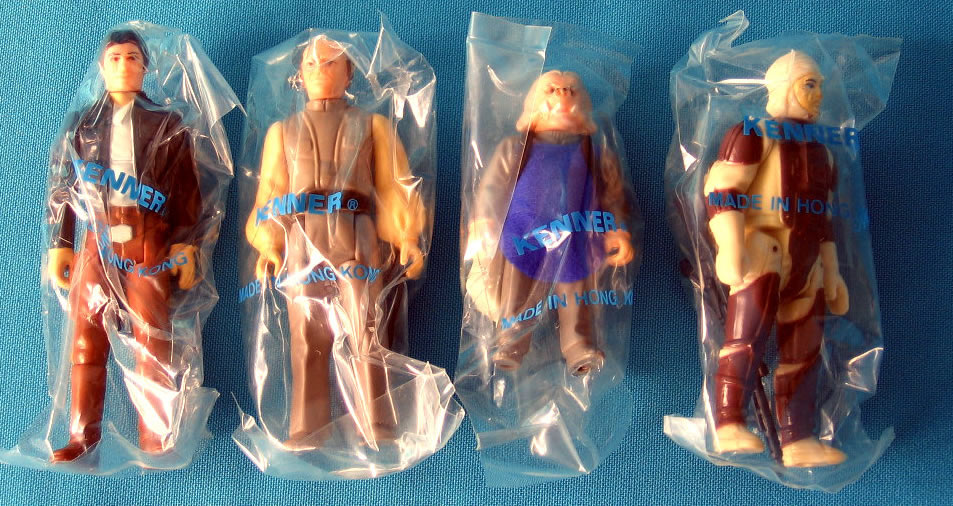 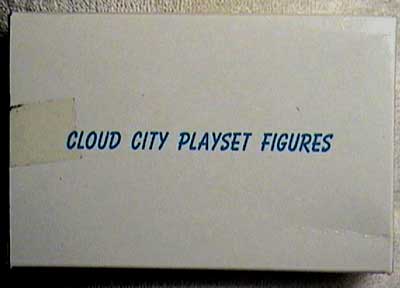 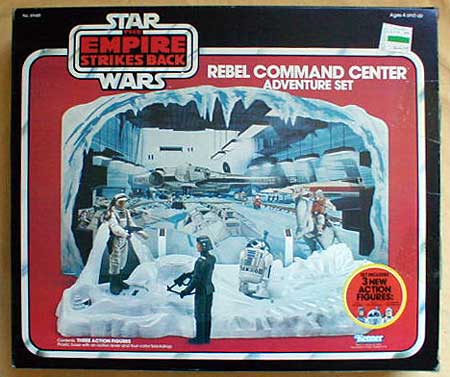 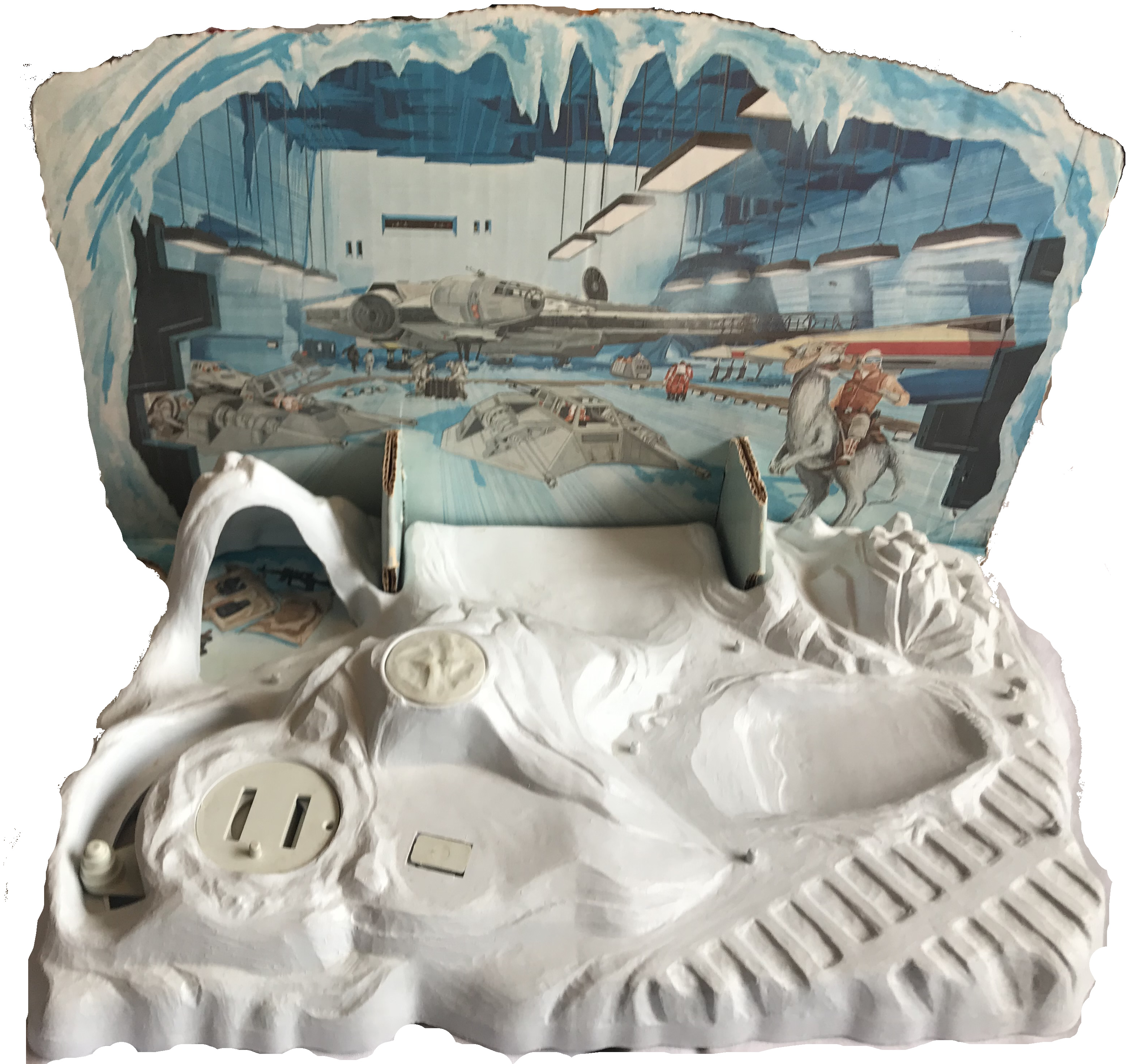 I have to say that I think the artwork on this one is my favourite, even though I prefer the Cloud City Playset overall.  I’m not a fan of the white base, which is re-purposed from the Land of the Jawas set, but understand the need for it with kids.  The Sandcrawler treadmarks are clearly from the mini-rigs, and if not they missed a marketing opportunity there.

The artwork is so good even looking at it makes you shiver. 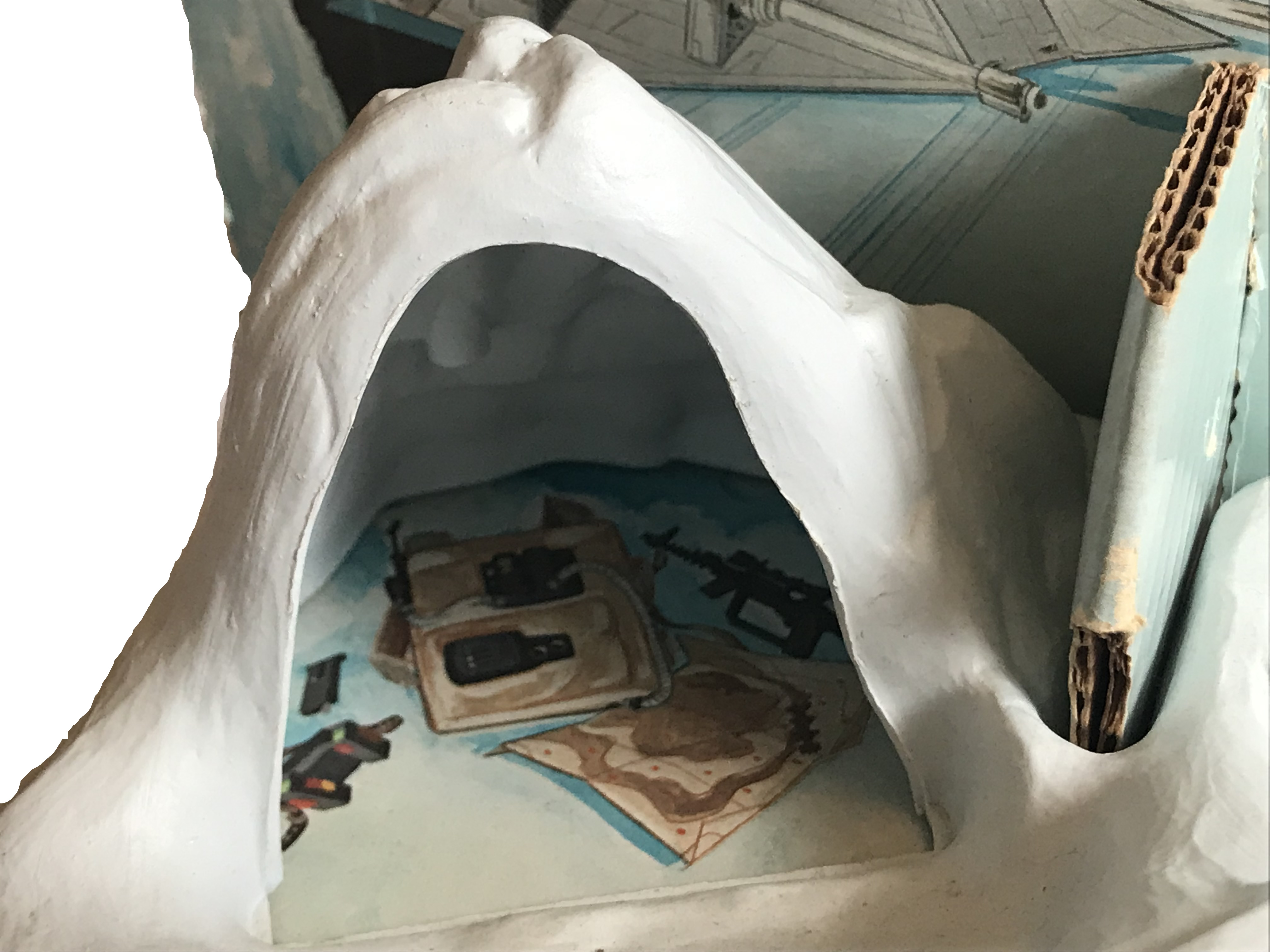 Inside the Jawa cave, er… Rebel cave?, are some painted accessories which suggest it’s more of a secret headquarters.  It’s certainly way too small to squeeze a Wampa in for the Luke battle.  This playset came with 3 action figures which were exclusive to Sears for the holiday season.  They must have had a strong relationship with Kenner.  These were R2-D2 with Sensorscope, Luke Hoth and the AT-AT Commander.  All great figures which definitely belong on Hoth! 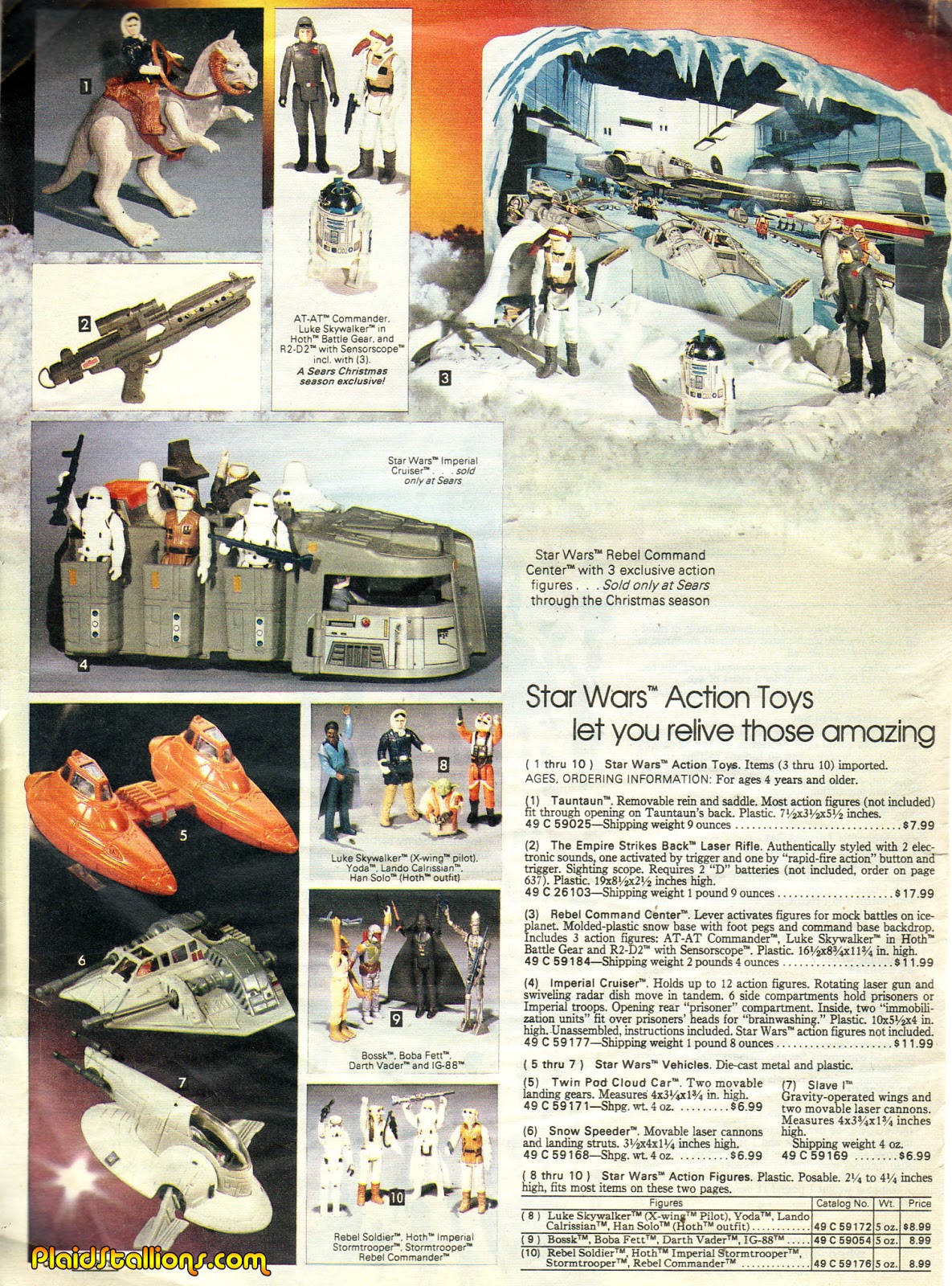 I find the advert here fairly lacklustre when compared to earlier ones, although it’s nice to see the figures being more cheery here as they wave their arms in the air.  Sadly, I believe this is the last time these playsets appeared in the wishbook.

As with the earlier playsets the 3 action figures were packaged in a white box also in ESB-D heat sealed baggies save for R2 which is ESB-C taped.

This advert also shows off the Imperial Cruiser which is another Sears exclusive – it differs a lot from the Imperial Troop Transporter.

Sears had another exclusive playset released in 1983 and 1984 in the Jabba the Hutt Dungeon adventure playset.  This was a plastic playset which was mainly a rework of the Droid Factory with a crane and no parts and is frankly quite dull.