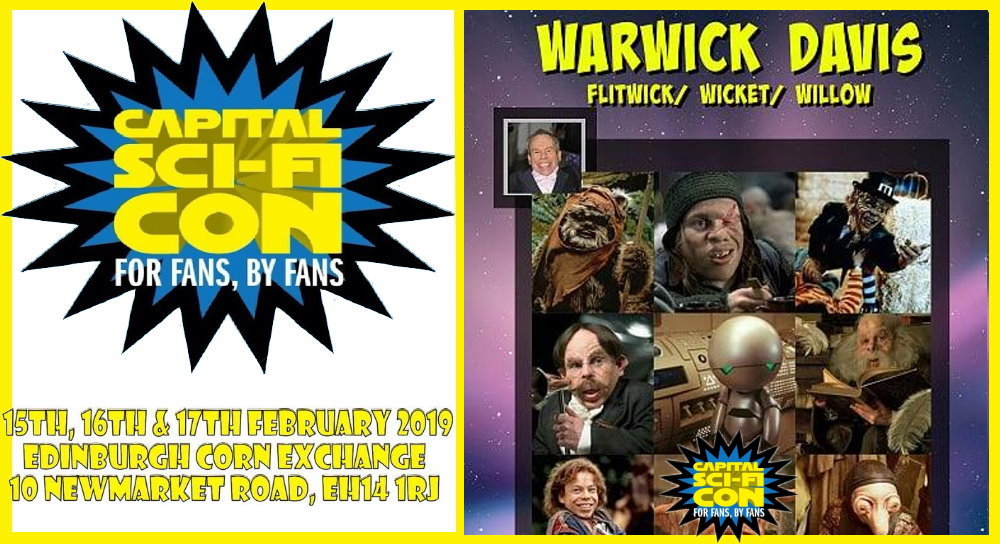 Capital Sci-Fi Con takes place at the Edinburgh Corn Exchange on 15th, 16th, 17th February 2019 and joining the guest list is a man who played multiple roles, from Return of the Jedi, the Ewok TV movies, the prequel trilogy, the sequels and the standalones. 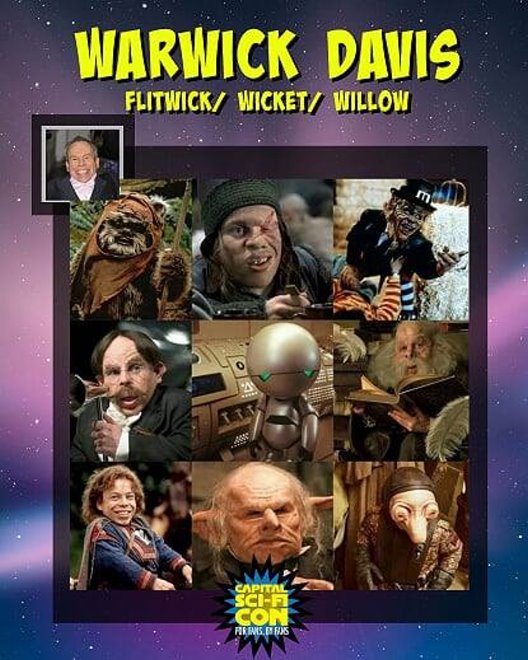 Tonight, we are really pleased to announce our next guest for Capital Sci fi Con 2019!

Please give a very warm welcome to the super talented Warwick Davis!

Way back in the beginning Warwick was originally cast as an extra Ewok in Return of the Jedi, but when Kenny Baker who was originally going to be Wicket fell ill, George Lucas picked Warwick to be the new Wicket after seeing how he carried himself as an Ewok.

Warwick later reprised his role as Wicket in the ABC made-for-TV films Caravan of Courage: An Ewok Adventure and Ewoks: The Battle for Endor.

In 1987, Warwick was called to Elstree Studios near London to meet with Ron Howard and George Lucas to discuss a new film project called Willow, which was written with Warwick specifically in mind. Willow was his first opportunity to act with his face visible and he co-starred with Val Kilmer in the film.

In 1993, he played the villainous Irish lead character in Leprechaun, alongside Jennifer Aniston, a role he reprised in five sequels.

Later Warwick returned to the Star Wars universe, playing three roles in Star Wars: Episode I – The Phantom Menace: Weazel, a gambler sitting next to Watto at the Podrace; Wald, who was Anakin’s Rodian friend; and Yoda in some scenes where Yoda was seen walking.

Warwick also starred in the Harry Potter franchise where he played the role of Professor Filius Flitwick. He played a white-moustached Flitwick in the first two films, and then a black-haired unnamed chorus conductor for the third instalment of the series. In the fourth film, Flitwick is younger looking, with short, brown hair and a trimmed moustache. In addition to playing Flitwick, Warwick played the role of the goblin Griphook in Harry Potter and the Deathly Hallows – Part 1, despite the role being played previously by fellow dwarf actor Verne Troyer.

Warwick also starred in the film version of The Hitchhiker’s Guide to the Galaxy, as the “body” of Marvin the Paranoid Android while the voice was provided by Alan Rickman.

Warwick appeared in the 2015 sequel Star Wars: The Force Awakens, then in April 2017 it was announced that Warwick would play Grand Admiral Thrawn’s bodyguard Ruhk in the fourth season of Star Wars Rebels.

In December 2017, Warwick then returned to Star Wars and appeared as Wodibin, an alien gambler, in Star Wars: The Last Jedi.

Warwick made further appearances in the film Solo: A Star Wars Story, released in May 2018, reuniting with his Willow director Ron Howard. This was Warwick’s eighth appearance in a Star Wars film.

Warwick has appeared in and hosted numerous TV shows, Theatre productions, Documentaries and has even held the stage at various Star Wars Celebration events worldwide!

Warwick will be meeting fans and signing autographs over Saturday and Sunday. He will also be taking part in our panel talks and photo shoots on these days too. You will be able to join Warwick at Meal with the Stars on Saturday evening where you can dine with all our guests at a beautiful 3 course meal.

Warwick joins fellow guests Jerome Blake, Chris Parsons, Kiran Shah, Katy Kartwheel, Aidan Cook and Lewis Macleod. Fantha Tracks are there covering the show, so be sure to say hi when you see us on the show floor.