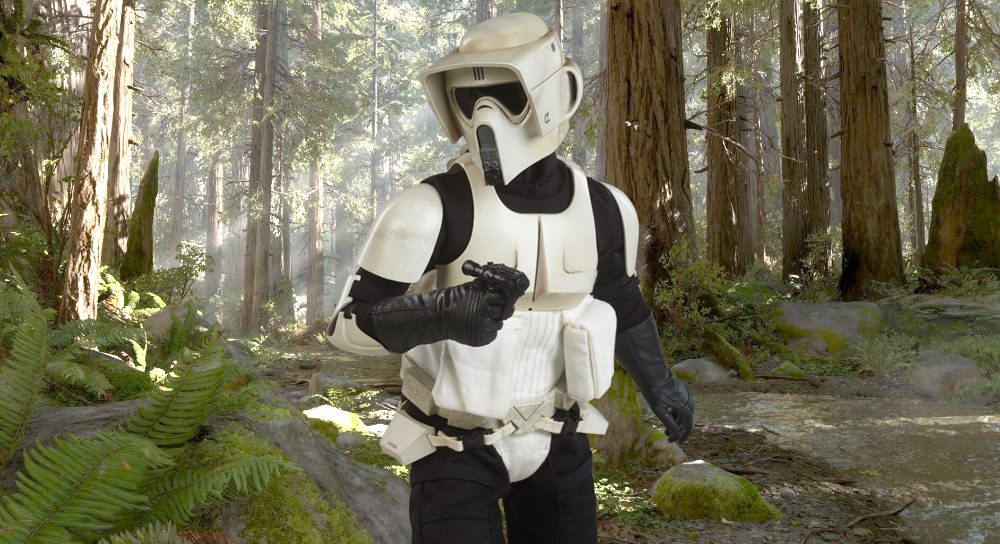 OK, so I’d decided to make a costume (a Biker Scout, remember?), I’d picked my side (Imperial of course!) and I’d made the leap to join the 501st Legion, but how would I actually start to put the costume together?

Luckily, the 501st is a worldwide groups with thousands of members and there’s always going to be someone to help with the research and building. The main point of contact is your local 501st Garrison / Outpost. Most of the garrisons will have set up their own forum which you can join and start asking questions in. That way you get to deal with people who will know nearby suppliers (if any are available) and who can talk to you in your own language. There are enough barriers put in front of us when making costumes – language needn’t be one of them!

Even better than just chatting with people online is to find out where your local garrison will be attending an event. That way you can start putting names to faces. In many garrisons you’ll also be able to help them out at events as a Supporter / Crew in their display areas. If you are very lucky then there’ll be someone there with the costume you are interested in so you can see it in real life and see how it all fits together. If you’re extra lucky they might even let you try it on so you can see how well you’ll fit the costume.

The next place to go for advice is the 501st Legion Detachments. Every costume is assigned to a Detachment and that’s where you’ll find the real experts who know every tiny detail of your chosen costume.

In my case, the Biker Scout costume belongs to the Pathfinders Detachment. I registered an account and started asking questions. That was my first mistake! Yes, of course you should register an account but, before you start asking questions, spend time reading the various forums. Most questions you have will already have been answered and it annoys people if you expect to have everything just served to you on a plate. You have to do some legwork first.

The hard thing with making costumes is that most of us don’t have the skills to make a plastic costume from scratch. You need to have vacuum tables, modelling skills and so on. I certainly had none of that! Instead most people end up buying a kit. Nowadays, with the likes of Anovos selling licensed costumes, it’s getting easier but even they have problems with delivery etc. Most of us choose to go for a private “garage builder.” These are people who have the skills and equipment but don’t have a licence from Lucasfilm. There is a kind of “don’t ask, don’t tell” policy that has been accepted by LFL. As long as you don’t sell your costumes at a massive profit and cut into the profits of licensees, they are happy to allow people to use their skills and allow us mere mortals to get a top notch costume.

Picking a supplier is hard. There are few people who have got every detail right and picking and choosing parts from different suppliers makes the price go up. In the end, you need to look at the options you have and choose the one that seems right for you. Basically you need to balance the accuracy of the costume against the price tag.

One tip is to not buy from ebay. There are loads of people on there selling “501st approved” costumes. Most of them are rubbish. Only buy from ebay if you know someone who bought from the same seller, got what they ordered and it was good quality.

I weighed up three options. Kropserkel, Studio Creations and Faraway Creations. There was just something about the Kropserkel kit that looked a bit off to me. I don’t know what it was but it just felt wrong so I removed that from my options immediately. Faraway Creations were the most accurate (and expensive) and I was strongly leaning towards them but then heard they had over-committed themselves and were having delivery problems. Their waiting time back then was over 6 months. Having mailed a lot with Studio Creations, they assured me that, while their kit was not quite as accurate, they had a very competitive price and would be able to ship within a month. My mind was made up and I parted with my hard earned credits.

Now I just had to sit back and wait for my kit to arrive. Or so I thought…

Costuming For Dummies Part 1: Choosing your side

Congratulations to Stefan Cembolista, the new Commander of the 501st Legion

Star Wars: A New Hope
$19.99
Buy on Amazon This is a paid link. Learn More. Clicking the link may take you to the Amazon store servicing your country Price incl. tax, excl. shipping.  Details correct as at: 2021-01-23
Bestseller No. 2

Star Wars: The Rise of Skywalker
$19.99
Buy on Amazon This is a paid link. Learn More. Clicking the link may take you to the Amazon store servicing your country Price incl. tax, excl. shipping.  Details correct as at: 2021-01-23
SaleBestseller No. 3

Star Wars: Light of the Jedi (The High Republic) (Star Wars: The High Republic)
$17.94
Buy on Amazon This is a paid link. Learn More. Clicking the link may take you to the Amazon store servicing your country Price incl. tax, excl. shipping.  Details correct as at: 2021-01-23
Bestseller No. 4

Star Wars: Return of the Jedi (Theatrical Version)
$19.99
Buy on Amazon This is a paid link. Learn More. Clicking the link may take you to the Amazon store servicing your country Price incl. tax, excl. shipping.  Details correct as at: 2021-01-23
Bestseller No. 5

Star Wars: The Phantom Menace
$19.99
Buy on Amazon This is a paid link. Learn More. Clicking the link may take you to the Amazon store servicing your country Price incl. tax, excl. shipping.  Details correct as at: 2021-01-23
Bestseller No. 6

Star Wars: The Force Awakens (Theatrical)
$19.99
Buy on Amazon This is a paid link. Learn More. Clicking the link may take you to the Amazon store servicing your country Price incl. tax, excl. shipping.  Details correct as at: 2021-01-23