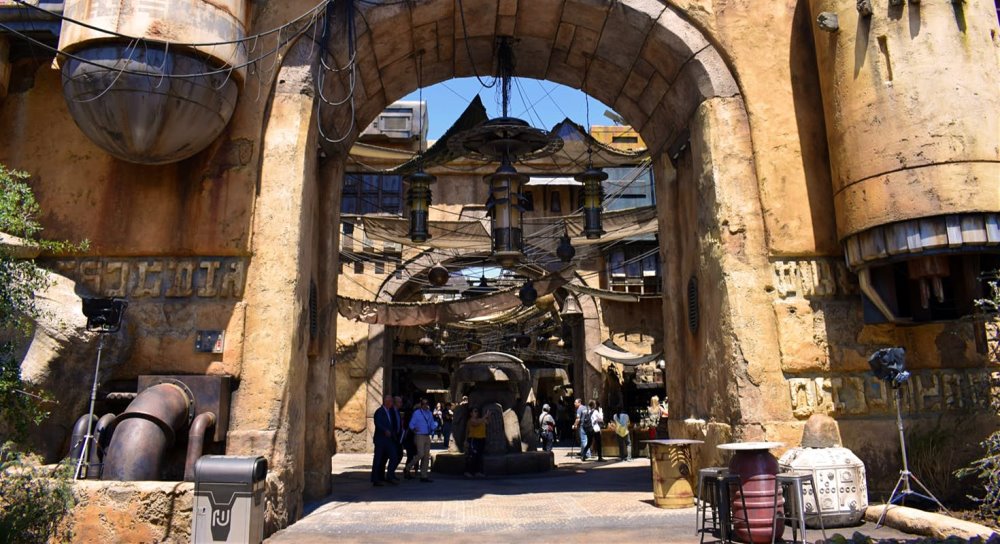 Disney have tweaked the menu at Galaxy’s Edge at the Disneyland Resort, as well as adjusting how and when you can reserve the various activities at the park.  All information comes from the Disney Parks Blog.

Starting on Oct. 21, to make your trip planning easier and give you more flexibility, Oga’s Cantina (as well as Savi’s Workshop and Droid Depot) will begin offering advance reservations up to 60 days in advance, following the 60-day reservation process currently offered for restaurants and experiences requiring reservations throughout the Disneyland Resort.

At Oga’s Cantina, a new charcuterie plate will join the menu: the Happabore Sampler featuring a selection of cured meats, artisan cheeses, pickled and preserved rations, and crackers. It’s the perfect shareable bite to munch on while you sip on the many delicious concoctions Oga has to offer.

Finally, right next door at Kat Saka’s Kettle, you’ll soon be able to snack on chocolate popcorn with Crait Red Salt (this salt comes from Crait, the now-uninhabited red mineral world dusted by a layer of white salt which reflects the planet’s sunlight. Once a Rebel Alliance outpost, the planet has now become a safe haven for the fleeing Resistance forces).

All five items will be available beginning Oct. 16th.

Fans of Star Wars literature will recall that Kryll was first mentioned by Raymond L. Velasco in A Guide To The Star Wars Galaxy.  Velasco established it as the home world of the race, Pui-Ui – first mentioned in Han Solo And The Lost Legacy by Brian Daley.

They appeared in a comment by Xim the Despot.

“Skin a Pui-ui, either I have lost my wits…or the Hutt has lost his guts!“

So if buying some Kryll Pork Rinds, check they come from a Batuu pig and not from Pui-Ui. Nobody wants to be eating the rinds of Pui-Ui!!!

Coronavirus update: Disneyland could open in June under Stage 3 measures

Coronavirus update: Stage 2 reopening approved by California Governor; Is it too late for Celebration Anaheim?

Coronavirus Update: Disneyland to close due to coronavirus pandemic