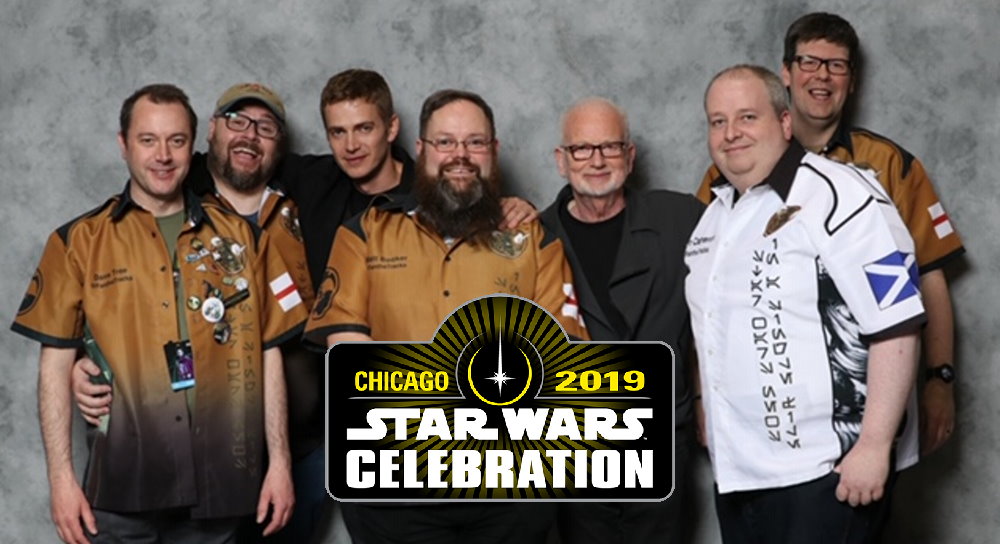 One of the best things about Celebration is having the opportunity to meet the actors from Star Wars, whether they be OT, PT, ST or from the world of animation. This year was no exception, and some of us were lucky enough to purchase autographs and have a varied range of items signed from figures to posters while other Fantha Trackers had photo ops with some of the stars.

Here are some of our favourites….

The photo opportunities on offer from Topps at Celebration Chicago this year were outstanding and the photo and autograph hall was a well-oiled machine. The customer service shown by Topps was undoubtedly a highlight of the convention for me and the wait time to get your picture taken with the likes of Hayden, Ahmed and The Clone Wars cast was perfect, with an allotted time slot to queue up, freeing your time up to explore the exhibition hall and the many panels.

Celebration Chicago was my first U.S. based convention, having previously attended the three previous Celebration Europe events, and I was not disappointed. I never dreamed that I would get the opportunity to have my picture taken with the amazing cast from The Clone Wars, a show that means the world to me and my eldest son Elliott. I look forward to sharing the show with my younger sons Sebastian and Oscar in the coming years.

One of my highlights from the entire convention took place on the Thursday opening day, when myself and my brother in the force Martin “Zuvio” Keeler had a photo opportunity booked with Freddie Prinze Jr and Vanessa Marshall. I’d been talking back and forth with Vanessa over social media for a number of years and to finally meet her and Freddie was great. I think we surprised her when we introduced ourselves as we got in position for the photo, a moment I’ll always treasure! Martin, the teary video is in the post 😉

Autograph wise I was very lucky to complete my Star Wars Rebels Ghost Crew picture by catching Dave Filoni on the show floor. I also got a signed picture from Erin Kellyman who was an absolute legend, Greg Proops who I’ve watched on Whose Line is it Anyway for years and Dave Chapman to my Rio multi-piece. The highlight for me on the autograph front though, was meeting Jon Favreau on the show floor and adding him to my Rio picture. Jon has been a hero of mine since I first saw Swingers and someone I’d always wanted to meet. I was not at all disappointed and this really made Celebration Chicago something truly special.

I’m never much one for autographs and signings, partly because I always seem to spend my money on other things but mostly because I hate queuing! That said, this Celebration gifted me a golden moment that I’ll never forget, thanks to every Fantha’s favourite surrogate uncle, Martin Keeler.

Martin planned a photo op with Ian McDiarmid and Hayden Christensen which, given the cackling reveal in The Rise of Skywalker teaser, couldn’t have been better timed. 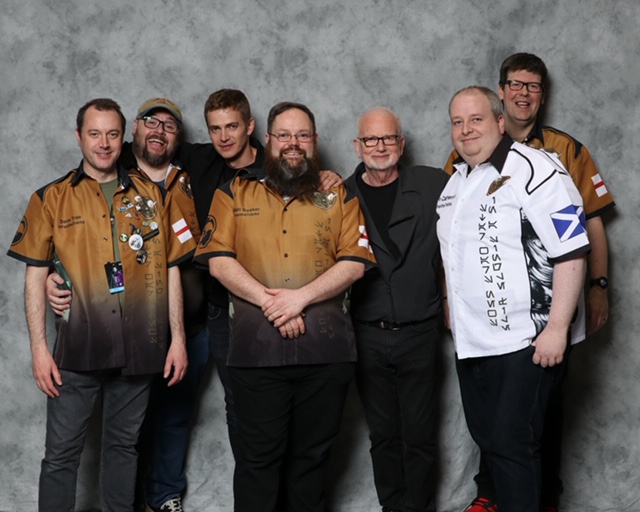 So, with the five gold shirts gathered in one place (well, Brian wore his white shirt but you get the point) we took a golden opportunity to be photographed with the master and the apprentice. Yes, I thought Hayden would be taller and didn’t expect Ian to be quite so disarmingly charming (“Is the tall fellow going to be in the shot?”) but for a grand 30 seconds we felt like the center of the Star Wars galaxy, which I guess is the magic of Celebration that no amount of coaxium can buy.

I’ve been collecting Star Wars autographs for about 20 years now and have attended five Celebrations. Every one has been a bit of a nightmare when I’ve had to spend hours in queues just for the chance to get someone to write their name on a poster and say maybe three words to me (if I was lucky). For Celebration Chicago, Topps had introduced a new timed queue system. Basically you pay in advance, get a a timeslot, turn up and the queue should not be too long. I was skeptical , to say the least. That made the actual experience I had all the sweeter. I signed up for a few of the big names including Alan Tudyk (K2-SO) and Ahmed Best (Jar Jar). In all cases but one, the queue time was under 15 minutes! The exception was Jason Isaacs (the Grand Inquisitor in Star Wars Rebels). And the reason for the delay? He was taking time to speak to each and every person who visited his table! He made everyone so welcome and chatted freely about Star Wars, Star Trek, Harry Potter and everything else he has appeared in. What a gent!

However, for me the top signing moment came early on the Sunday morning. Prior to his panel about The Mandalorian, Jon Favreau was having a walk around the exhibition floor before the hall opened. Thanks to a fellow Fantha Tracker, we were able to intercept him and get an autograph. Just a few moments later we met Dave Filoni and then Timothy Zahn! What a result!

All in all, I managed to add 13 new autographs to my latest poster collection. Yes, it cost a small fortune but it was totally worth it and the excellent organisation by Topps made it a fairly painless process. There are some improvements that they could make but this was so much better than before. I’m a happy autograph hunter!

Between us, my son Matthew and I have around 50 autographed 10x8s of our favourite Star Wars heroes and villains gathered from various shows around the globe.

From the background characters to major stars of the saga, we have collected signatures from all corners of the galaxy – by visiting all four corners of the world.

I had planned to grab a few new additions to the collection at SWCC, but when Hayden Christensen was announced late on in the run up, there was no question who I must see. 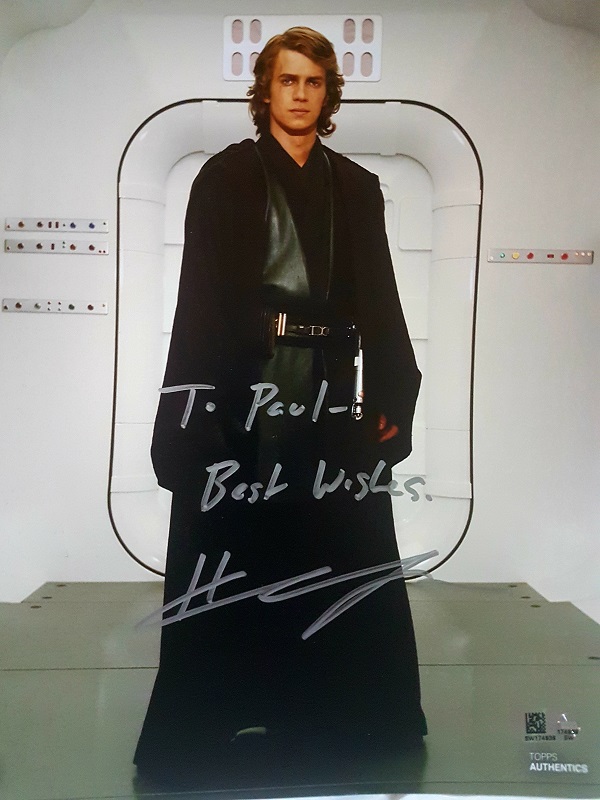 Understandably the photo opps and signings with key actors from Star Wars cost a premium. It’s just the way of things. The way of the Force.

What Topps has brought to the party is greater organisation, including fabulous visibility in the queues with the mock up images behind each signee resembling the blue series of collector cards from the 1970s. The stick of gum must be huge!

It’s fair to say you don’t get long with your heroes/villains. If you get more than a minute you’ll have done well. But I can now say I have shaken hands with Anakin Skywalker and exchanged pleasantries.

Another bonus with Topps in the room is that a holographic authentication sticker can be added to your signing as further provenance.

Yes, it was $200, which I appreciate is a hefty sum, but it is going to look amazing when my display goes up on the wall.

More than just another great memory from my visit to Chicago in the April of 2019, it will be treasured for years to come.

I had a tremendous time at the autograph and photo area.  I was able to get a few new autos and photos as well as some of my black series figures signed.  However I want to focus on how Topps delivered on the promises that they made about delivering a much better experience than Celebration Orlando.

As you may have seen we have been lucky enough to interview Mark Voh Ohlen from Star Wars Authentics where he promised change and I believe he delivered.  It’s worth looking at the video interview below where you can see his commitments to making this a better autograph and photo experience and I believe he was good to his word.

It would appear that Mark was also pleased but as always has his eyes on making it a better experience next time.  You can see what he had to say about the show experience in this video.

All I have to say is well done to all involved – I think it was one of the best autograph experiences.  I never thought I would only have to line up for only 23 minutes to get a Hayden auto but with the system in place that is exactly what happened.  Brilliant Work!