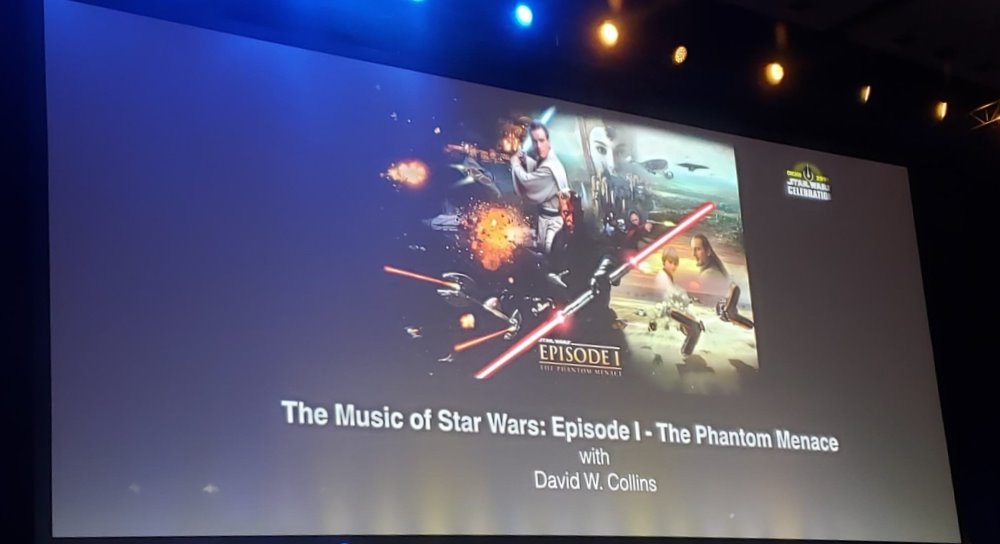 In honor of the 20th anniversary of Star Wars: Episode 1 – The Phantom Menace, two of our many musical Fantha Trackers – Megan Cullinan and Carl Bayliss – write about John Williams’ glorious soundtrack via the melodic musings of David Collins. Megan reviews David’s panel from Star Wars Celebration: Chicago while Carl breaks down relevant episodes of the Star Wars Oxygen podcast.

One of the great things about Star Wars Celebration is the variety of panels offered.  It can be difficult to be able to attend them all, but I was fortunate enough to be able to make “The Music of Star Wars: Episode I – The Phantom Menace” panel hosted by David Collins. 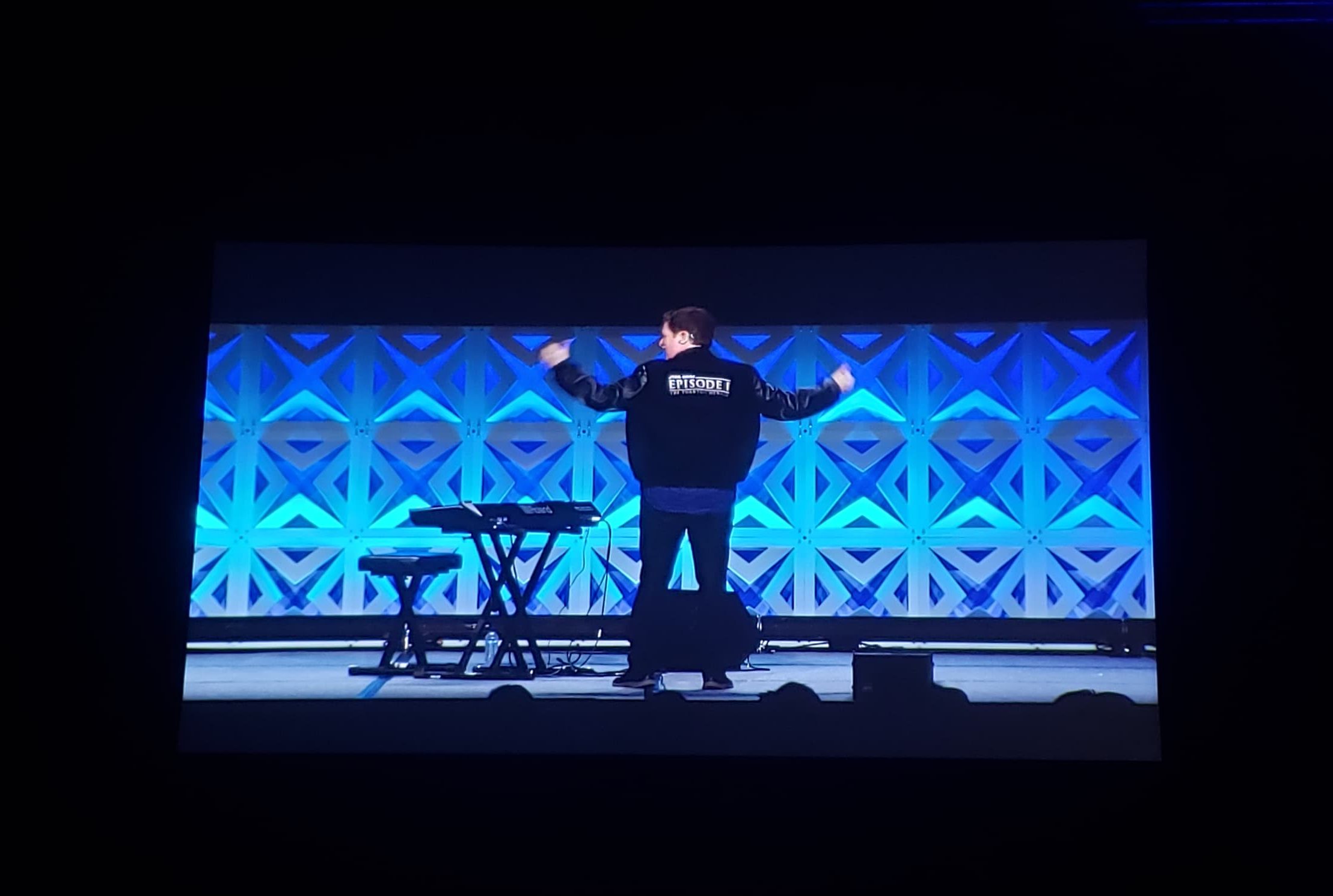 The Phantom Menace has always held a special place in my heart for many reasons.  It was actually the very first Star Wars soundtrack I had ever purchased. Thankfully I bought it AFTER I saw the movie (there are famously major spoilers in a certain track title….) and I remember listening to it over and over again that summer. 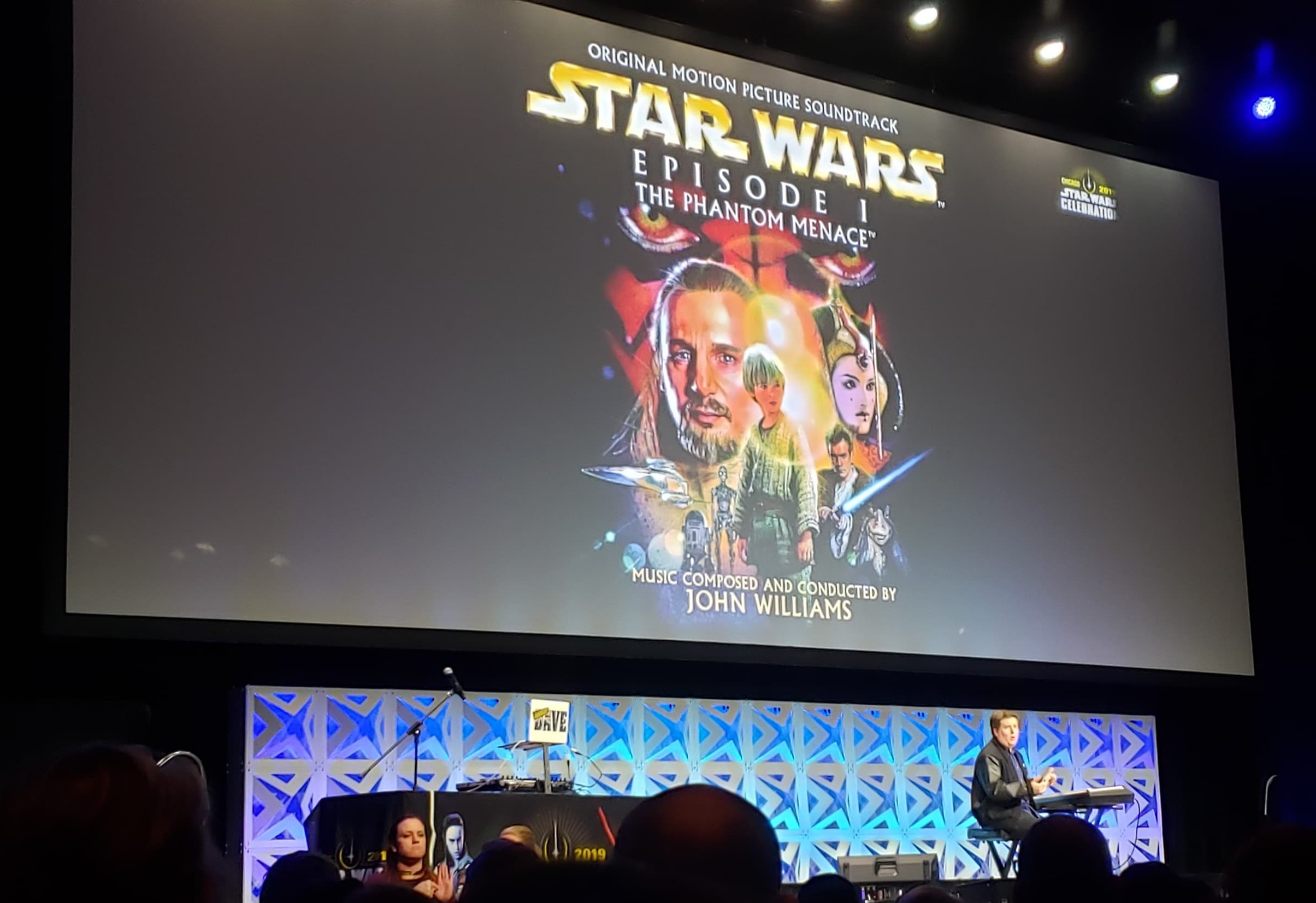 During the panel in Chicago, David Collins did a really great job of breaking down some of the really significant pieces from the movie. However, he first spoke about music itself ,saying that music is important because it enhances a story. It’s a language that we all can understand. It’s in our daily lives. It surrounds us… It binds us. Okay, music is actually the Force!

Like I said, I have listened to The Phantom Menace soundtrack numerous times, but admittedly it has been quite a few years since I’ve listened to it fully, so not only was I reminded of many important musical moments during the panel, I also learned some new things. 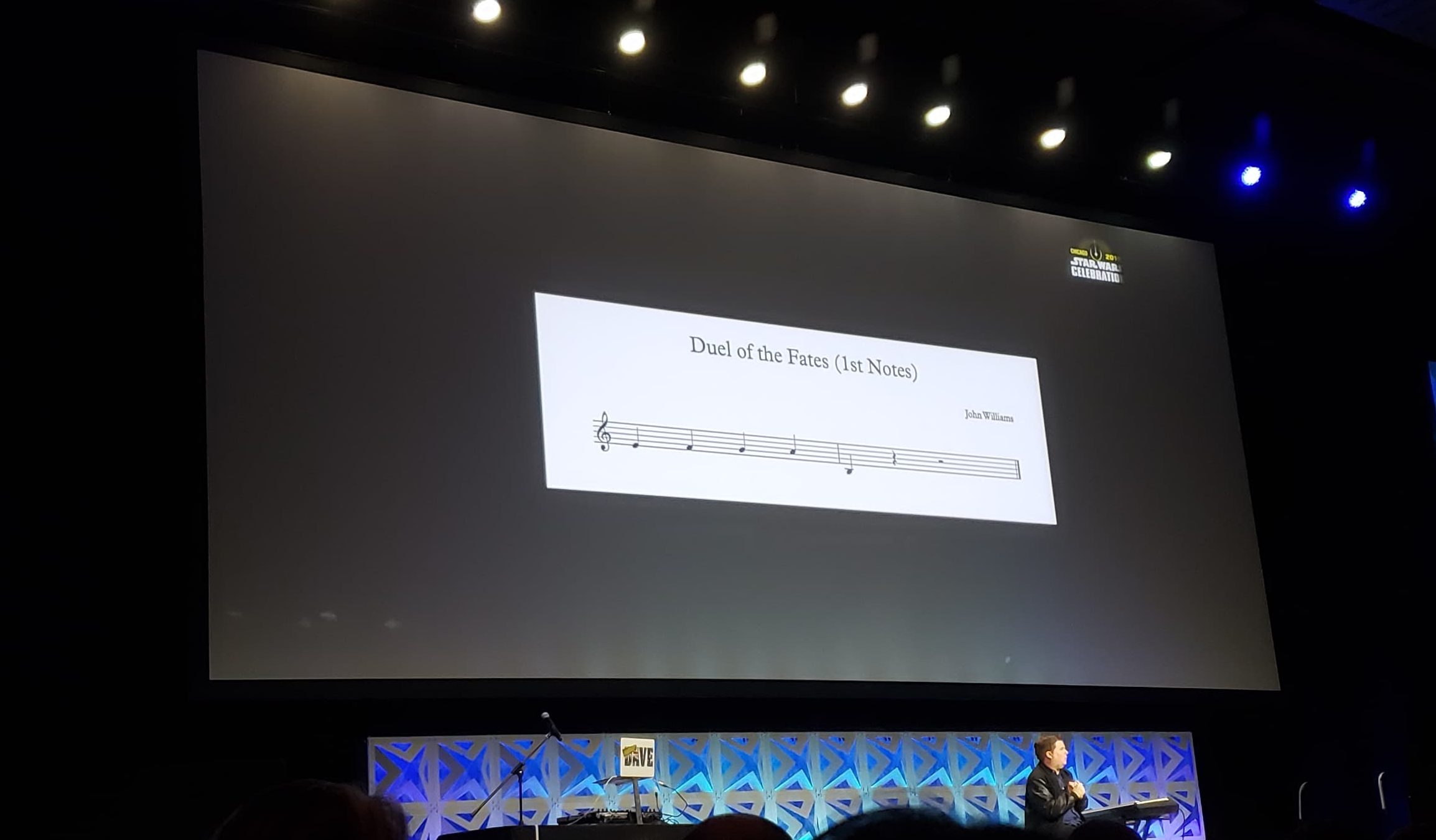 “Duel of the Fates” is probably my favorite piece written for The Phantom Menace, and it is absolutely in my top three pieces for ALL of Star Wars music.  David explained how it’s like a ballet, drawing similarities to Stravinsky’s “The Rite of Spring.”  He also compared it to Orff’s “Carmina Burana,” a magical choral piece which I’m sure many of you have heard at some point in your life. I’m a vocalist, so I think this is why I connect to “Duel of the Fates” so much.

Interestingly, the lyrics were inspired by a Welsh poem (Battle of the Trees) and sung in Sanskrit. David also spoke about how “Duel of the Fates” pulls a little from the “Imperial March” and a little from the Force theme. This makes me wonder if we will get a similar epic musical moment in The Rise of Skywalker from John Williams.

“Anakin’s Theme” is another major piece of music in The Phantom Menace. It utilizes Lydian mode (just like “Yoda’s Theme” does). In music, more often that not, a piece of music will either be written in a major or minor key. However, there are a number of other modes to pull from and Lydian mode in particular is like the major key but with the fourth note raised by a half step, thus giving it a slightly different and perhaps more mystical sound. (May the Raised Fourth be with you!)

“Anakin’s Theme” is actually quite long and has EVERYTHING in it! A high midichlorian count, as David explained it! It expresses so many different moments throughout the music. In fact, “Anakin’s Theme” can be heard at the end of the credits, concluding with a moment from “The Imperial March” accompanied by Darth Vader’s breathing. Talk about foreshadowing!

Now let’s talk about Palpatine. We know he hasn’t quite made Emperor status yet, but he’s gallivanting in the dark as Darth Sidious. “The Emperor’s Theme” was first heard in Return of the Jedi. During The Phantom Menace, that melody follows Palpatine like a shadow throughout the movie. It is written in a minor key. Minor keys are the best because they can have the most ominous sound, but the best and most interesting part of his theme is that it shows up at the end of the movie when everyone is happy and celebrating on Naboo. The main melodic line in “Augie’s Great Municipal Band” is “The Emperor’s Theme” but in a MAJOR KEY! My mind was blown when I heard this and I’m not ashamed to say I never knew this. What an amazing piece of Star Wars musical trivia!

I think this is where you truly see the genius of John Williams.  Not only does he create music that pulls at your emotions, but there is so much more to the story the deeper you look. Truly, what would Star Wars be without the music of John Williams?

As a musician I was really hoping to catch this panel via the live stream as I was unable to join the team in Chicago, but sadly this wasn’t to be. To console myself I went back to listen to the excellent podcast that David hosted with Jimmy Mac from Rebel Force Radio, Star Wars Oxygen, focusing on the music of Star Wars. The podcast spent 4 episodes looking at the music of The Phantom Menace and was presumably the source for the Celebration panel material, albeit delivered in a condensed format.

The main themes were all discussed in Chicago as Megan has outlined above, but the podcast went in to more detail, looking at some of the subtler elements that show the deep-lying gems that John Williams weaved into the soundtrack.

Everyone agrees that ‘Duel of the Fates’ is a masterpiece of Star Wars composing and was groundbreaking for the saga in its use of choral elements which hadn’t really been used in the Original Trilogy, but much like the design work of locations and ships, this is used to reflect a more affluent time in the galaxy and also underline the sinister forces at work in the shadows.

Although most people will identify with the full-force version of ‘Duel…’, it is hinted at several times with the Sanskrit ‘lyrics’ ‘Korah, Ratamah’ whispered when Darth Maul appears, most notably when he dispatches his probe droids to locate Padme and her companions.

There is also exploration of how some of the Original Trilogy soundtracks are plundered for some of the film cues, which differ from the ‘recorded’ soundtrack. The screen used cues are available on the Ultimate Edition of the soundtrack, a two-disc set with the music as it appears in the film, as well as the MTV dialogue version of ‘Duel….’. 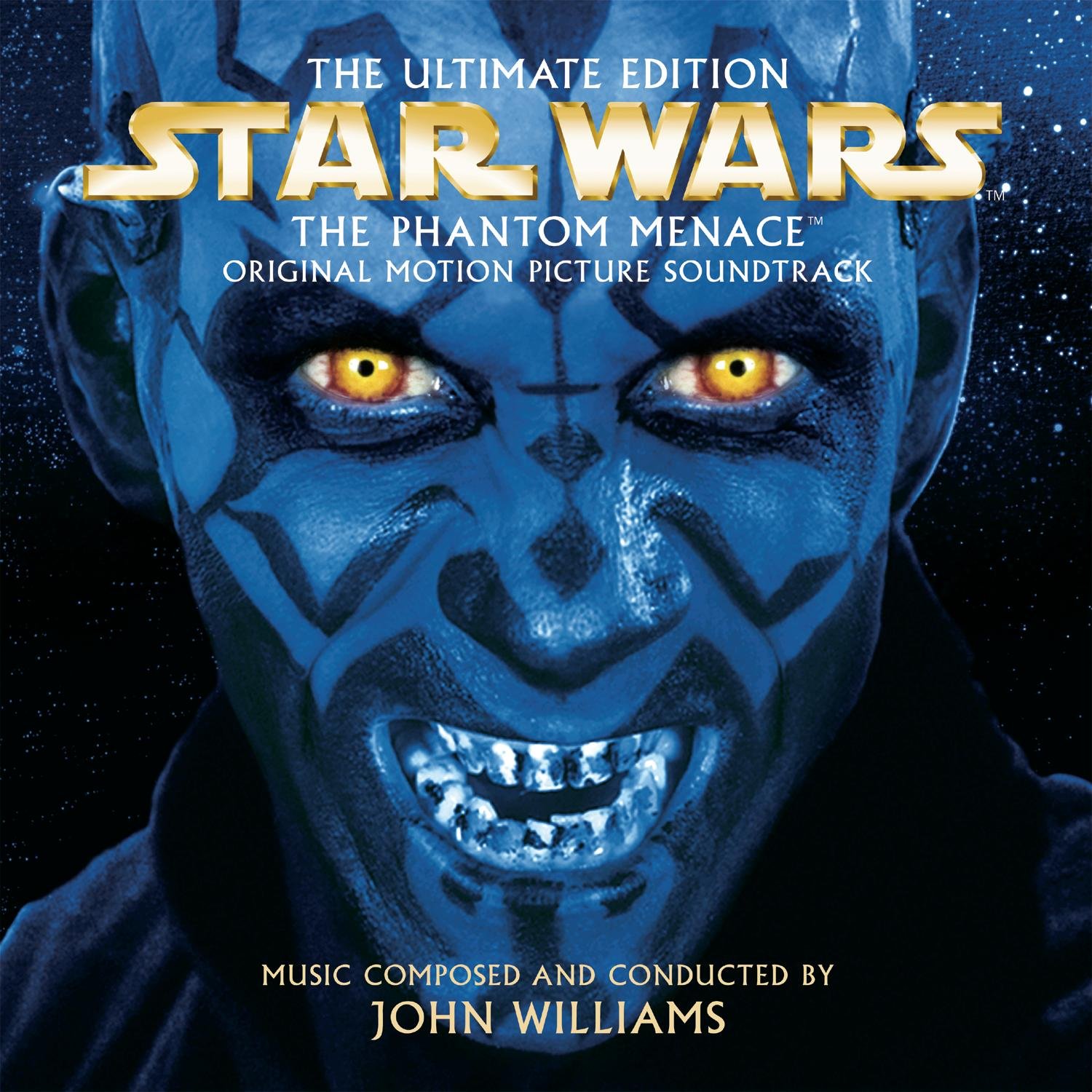 David explores how some music is changed perhaps to fit a revised edit of a scene or to enhance or draw out a particular emotion within the viewer. He also expertly demonstrates how some cues layer elements from The Empire Strikes Back soundtrack, which has also been the source for several parts of most of the Star Wars trailers in recent times.

If you love your Star Wars music, then look up these podcasts as David’s forensic examination of the themes and comparisons to other pieces demonstrate just how clever John Williams is when piecing together his own jigsaw, a trait which has also been continued by John Powell and Michael Giacchino in the two non-saga films to date. 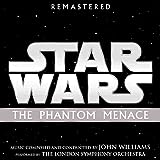