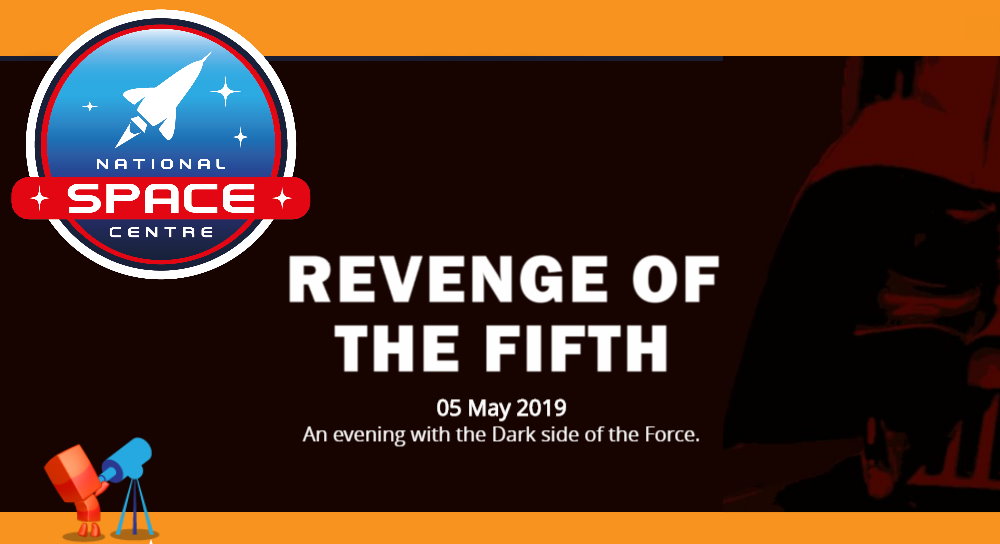 It’s most likely the busiest weekend of the year for Star Wars fans, celebrating the gimmick holiday of the saga and what better place to spend it than at the National Space Centre listening to the awesome Blues Harvest and watching Solo: A Star Wars Story?

Not had enough Star Wars on May the 4th? Thinking of stepping over to the Dark Side? Think you’d be a great Sith? Revenge of the Fifth is here!

Join us for a very special “adult only” evening of music, art, science, fashion and food, that will be dedicated to celebrating the Dark Side of the Force, with maybe a hint of Rebellion!

Music
Blues Harvest have built up a solid reputation as the go-to party band for geek events, having played their blend of Star Wars parodies and other classic movie songs in comic-cons, space centres and cantinas across the UK. Fronted by comic book illustrator Nick Brokenshire (Star Wars Adventures / Dark Horse / 2000AD / IDW) this geek-rock group have regularly been joined on stage by performers from all areas of the Star Wars franchise. Mark Hamill became a fan of the band in 2017 and declared one of their songs, Tatooine Sunset, as “Magnificent! The lyrics, performance and John Williams’ theme fade-out: PERFECTION.”

Force Fashion
Dress to impress and step onto our catwalk… get your geek chic on display and win prizes.

Silent Sith Disco
Dance like nobody’s watching! Put on the headphones, choose your tracks and get lost in the music.

Imperial Navy Laser Challenge
Can you get take the Millennium Falcon from the Jedi “scum”? Maybe you want to prove that Stormtroopers really can hit their target. Join us for the ultimate blaster challenge.

Silver Sabres
Join our Jedi Masters to learn the ways of the Force. Lightsabers provided.

Science
Drop in to the LIVE Science Zone to learn more about the science facts behind the fiction.

Hyperspace Hypermarket
Grab some memorabilia at great prices in our huge sci-fi market offering must have merchandise and vintage collectables!

The Admiral Snackbar
Fancy a Porg Pie or a Bantha Bite? Head to our café for some very special snacks from a galaxy far, far away.

Cantina Cocktails
Throughout the night our bar will be serving some very special alcoholic and non-alcoholic drinks for purchase. If you need the Force awakening, head to our bar.

Take a seat in our newly upgraded Planetarium to end your night with a late-night screening of Solo: A Star Wars Story.

During an adventure into the criminal underworld, Han Solo meets his future co-pilot Chewbacca and encounters Lando Calrissian years before joining the Rebellion.

Click here to book your tickets and we will see you there.

Return of the Garrison: UK Garrison film the weekends events

Return of the Garrison: Daniel Logan drops in

May The Fantha’s Be With You: Fantha Tracks on the road for May the 4th weekend

Return of the Garrison: 23rd and 24th June at the National Space Centre

May The 4th Be With You Leicester