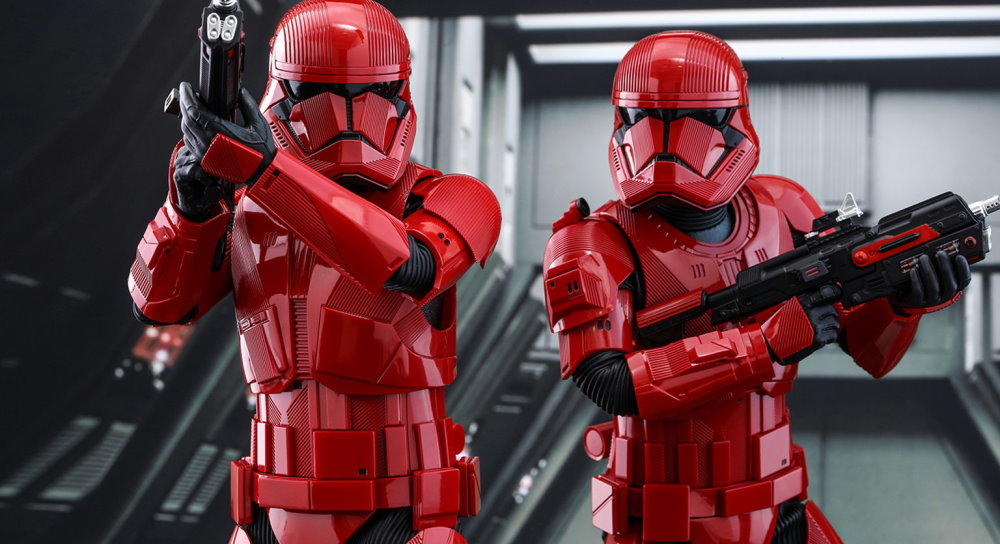 San Diego Comic-Con has begun and the Star Wars booth has unveiled the first real look at the new Sith Trooper from The Rise of Skywalker. The new design is on display in a special exhibit detailing the evolution of Stormtroopers. Fans are able to see the new armor up close and interact with a couple of troopers on patrol.

”in it’s ultimate push toward galactic control, the first order *readies?* an army of elite soldiers that draw inspiration and power from a dark and ancient legacy.”

The official description of the troopers reads:

In its ultimate push towards galactic control, the First Order readies an army of elite soldiers that draw inspiration and power from a dark and ancient legacy.

The exhibit also features a chilling video called, “The Evolution of the Stormtrooper.” Johnamarie Macias shared these videos online and you can watch them below.

Here’s part one of the Stromtrooper video that plays at the exhibit. It includes behind-the-scenes footage of how the Sith Trooper was made for #TheRiseOfSkywalker. #SDCC #SDCC2019 pic.twitter.com/KU1MBCatw4

In the video, Dave Filoni, Doug Chiang, J.J. Abrams and Gwendoline Christie discuss the inspiration behind the various Stormtrooper designs. The video takes viewers on a brief journey, from Ralph McQuarrie’s original concept to the modernized versions we see in the sequel trilogy.

“In The Rise of Skywalker, we have new troopers that are completely different in design. The materials, the color, the lines, there was something about the aesthetic of it that just felt absolutely right. I cannot wait for people to see the work that everyone’s done.”