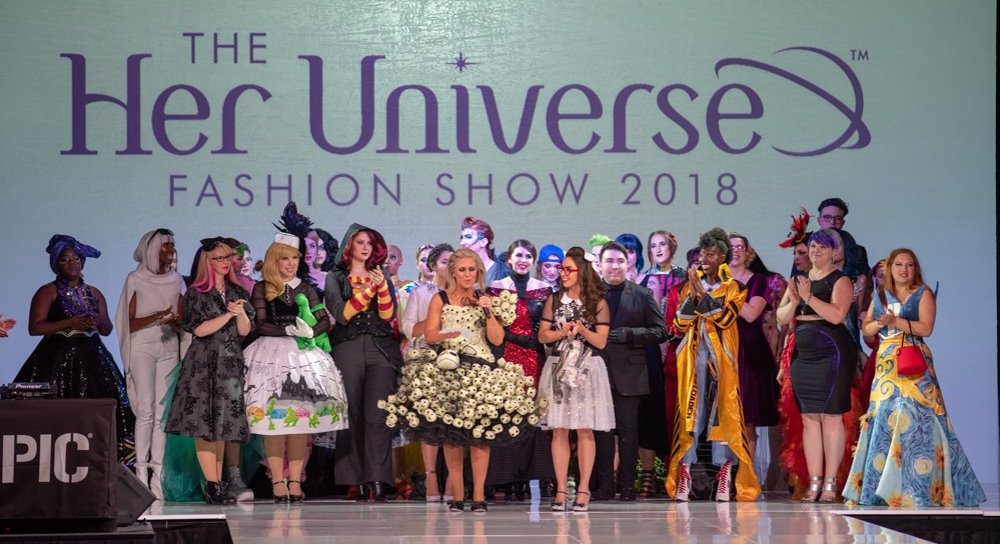 Our pal and one of the nicest guys in fandom Brian Sims has been all across SDCC 2018, snapping away and bringing his ever-awesome images to Fantha Tracks and fellow sites  and blogs around the world. As always, the Her Universe Fashion Show was a colourful, vibrant event – graced by the 13th Doctor Jodie Whittaker no less – and Brian brought us these super images.

The 5th Annual Her Universe Fashion Show Brought Down the House Thursday Night with the Biggest and Most Amazing “Geek Couture” Event Yet!

The ultimate runway for fangirl fashion, The Her Universe Fashion Show, returned for its milestone 5th anniversary show at San Diego Comic-Con last night with host, Star Wars Actress and Her Universe

Founder, Ashley Eckstein, shocking fans by wearing the first-ever, one of a kind couture gown made out of Funko Pop!s. Once again, designed by 2013 Her Universe Fashion Show winner Andrew MacLaine, Eckstein’s gown was made out of 500 Jack Skellington Funko Pop! heads and weighed 40lbs.

Eckstein’s gown was celebrating the 25th anniversary of Tim Burton’s The Nightmare Before Christmas. 24 stunning fashions were presented last night with 3 winners crowned to win the grand prize:

Kristi Siedow-Thompson (PWL Chic: Ripley in the Powerloader, Aliens) was named the Audience Winner
Cynthia Kirkland (The Couture of Water, The Shape of Water) was named the Judges Winner, by the expert panel of Judges
Jane Burson (Howl-In’ For You, Howl’s Moving Castle) was named the Singer Winner, for excellent sewing and construction

Later in the show the audience erupted when Jodie Whittaker (the new Thirteenth Doctor) walked the catwalk in a new Her Universe Doctor Who inspired line as part of the fashion show.

On the heels of the announcement at Comic-Con of the return of Star Wars: The Clone Wars on Disney’s direct-to-consumer streaming service, Matt Lanter (Anakin Skywalker) and Dee Bradley Baker (Clone Trooper) joined Ashley on stage wearing part of the new Clone Wars 10th anniversary collection from Our Universe.

Four junior designers were announced as the winners of the Cartoon Network Junior Designer Contest.

In celebration of the 20th anniversary of The Powerpuff Girls the four junior designers have won the opportunity to design a fashion collection with Her Universe for BoxLunch.

Stay tuned as the show isn’t done yet and Brian has plenty of room on his memory card for more colourful photos.

Mark Hamill was undercover at SDCC 2018

Take a closer look at the SDCC 2018 exclusives from Hasbro

SDCC 2018: Breaking News: The Clone Wars to continue with Siege of Mandalore