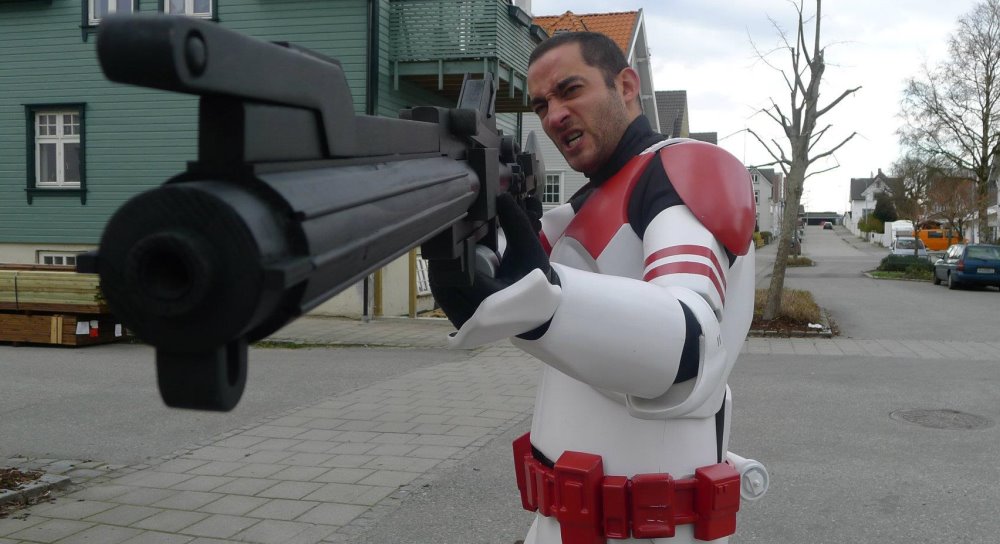 Our series of interviews “From different points of view” highlights Star Wars fans from across the world and allows them to tell you about Star Wars fandom from their point of view and how it has influenced their lives and the direction it has taken them and we return this week to Norway in Scandinavia but as you will see this is different point of view. Jazz is well known in the Star Wars community for his fashion forward geek couture and being a member of the Nordic Garrison. Jazz lives in Norway but you will see him at many Star Wars events across the world.

Jazz when did your love of Star Wars begin and how has it influenced you?

Back in 1983 my mum took me to the movies to see Return of the Jedi. I hadn’t seen the previous two films and had no idea what to expect. To be honest I think it was a bit too much for me to take in (I was five at the time) but I was blown away by Jabba’s court, especially the “green pig-dudes”! I was fascinated by Vader and the rebels and came out with my mind blown, though in some confusion as to what I’d seen. Of course, my mum told me there were two other movies and I just had to see them as well! So it started.

Since then Star Wars has been central in my life; from playing with the action figures, reading the Expanded Universe of books and comics, writing fab fiction, cosplaying, traveling, getting inked, and to a certain extent choosing my extended family!

This love of Star Wars also led you to join the Nordic Garrison, tell us about your role within the Garrison?

Well, actually I am a member of the Nordic Legions, which encompasses the dark side Nordic Garrison and light side Nordic Base. I first joined the Nordic Garrison back in 2005, when I put together a stormtrooper costume for the Revenge of the Sith premiere. That costume has now been retired and I don’t have any straight bad guy costume; I have two duals – a Tusken Raider and a Clone Commander Thire – as well as three good guys – Plo Koon, Jedi Master Kram Reiets, and Poe Dameron.

I have served as the XO in the Wampa’s Base, and several years as Country Rep, and am pretty much the head honcho in our region – and we have finally gotten enough cosplayers in our area that we will be creating our own squad, West Side Squad Yo!, pretty soon.

What is your favourite cosplay and why?

It is really, REALLY hard to choose a favourite as they all mean so much to me. But if I were to choose one, it would be my clone commander. It’s the one that I spent most time on, having clocked in about 300 hours in the building process, so I feel a closeness to the parts that constitute the whole. Clones are without a doubt my favourite of all the troopers in the Star Wars galaxy, and having chosen Commander Thire I have chosen one that represents my roots, my home country of Austria. His color scheme, red white red, emulates the Austrian flag. Also, when I wear him I feel completely badass. 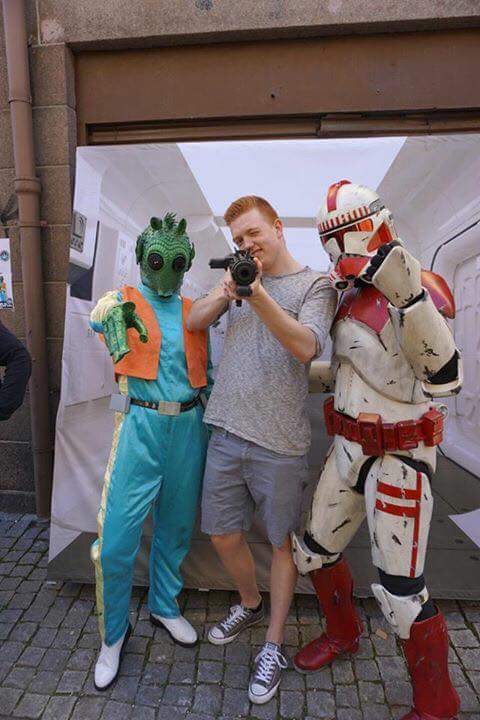 You began a Star Wars challenge at the start of the year, can you tell us a bit about it?

Back in 2015, I had a plan to wear all of my T-shirts back to back as I realize that I had an insane number of them, but only wore my favourites. This way I’ll be able to wear all of them. So I set myself a year long T-shirt challenge. However, 1st January 2016 came and went, and I completely forgot my challenge, so I had to postpone it a whole year. Now I’m on day 340, with only 25 days to go, and it seems that I am pretty close to having the exact number of T-shirts needed. It’s been really fun because I’ve been able to see exactly what I have in my wardrobe and wear each shirt once.

What do you plan to do with all the items at the end of the 365 days?

Well, I decided that since I already had a problem with too many T-shirts I might as well try to cut down on the numbers. Put simply they just take up too much space and my apartment is too small – so I’ve already started a process of selling some off at a reduced cost compared to what I bought them for. Many of only been worn once. And this way I have raised so far about £800, and I made a deposit to the Norwegian Mental Health Youth organization back in October.

In January I plan to sort out the rest of my T-shirts and decide which ones I want to keep and sell off the rest as well. It’s actually quite nice seeing friends wearing T-shirts that I knew came from me and that have supported a good cause. so keep your eyes on my Facebook page in January if you want new T-shirt or two.

You were the co host on a panel at Star Wars Celebration in Orlando, what was the panel about and can people access it now?

Ha ha, the panel preparation was absolutely nerve-racking, but it turned out to be a lot of fun. Lori Sartre and myself talked about fashion in the Star Wars geekdom; how Star Wars fashion has evolved from just plain T-shirts to much, much more. We discussed everything from homemade dresses, shirts, suits, and accessories, and tried to give the audience some ideas of how they might think of themselves and expressing their own personal fandom. 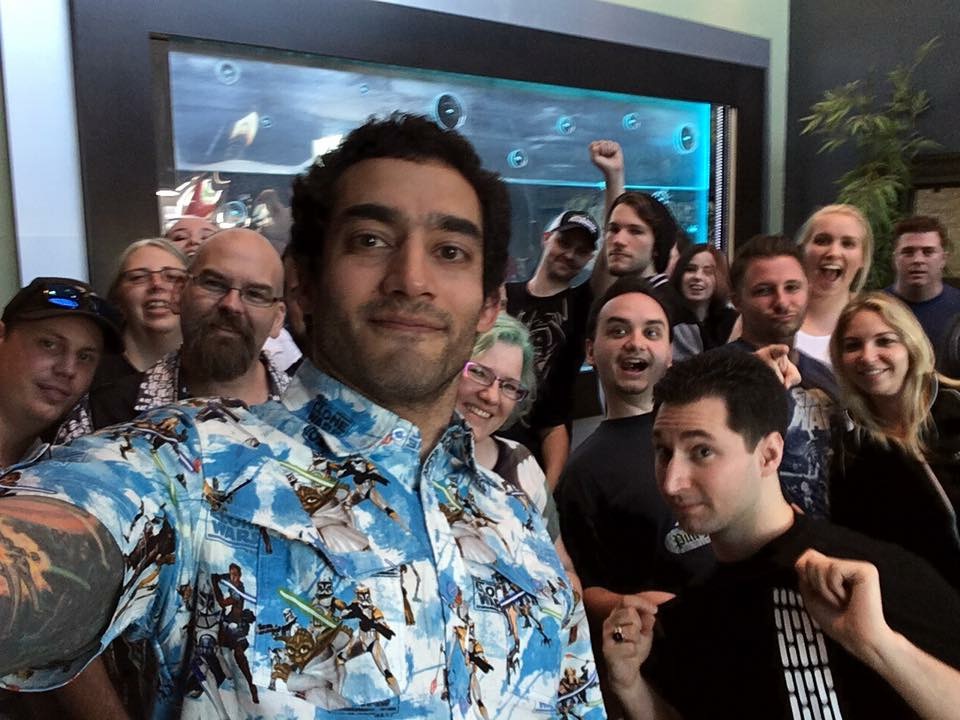 What are your next Star Wars plans?

I don’t think my next plans are much of a surprise – they are pretty much the same as everyone’s – attending the premiere of The Last Jedi and of course a little troop at the movie theater before hand for a couple of hours with some of the local gang.  Apart from that, sadly, there’s not much planned – we’ll see what 2018 brings…

Most ridiculous random piece of merchandise? A Japanese Star Wars-inspired droid model kit with a swastika sticker for Artoo’s dome! 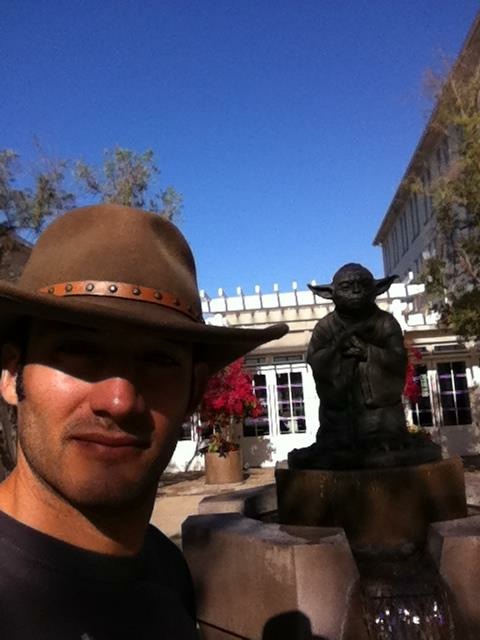 Clone Wars or Rebels? The Clone Wars! Rebels is good but TCW is in a league of its own

Worst Star Wars film? The Force Awakens – hope episodes 8 and 9 will be better

What colour of lightsaber would you have? Blue

What planet would you visit? Tatooine