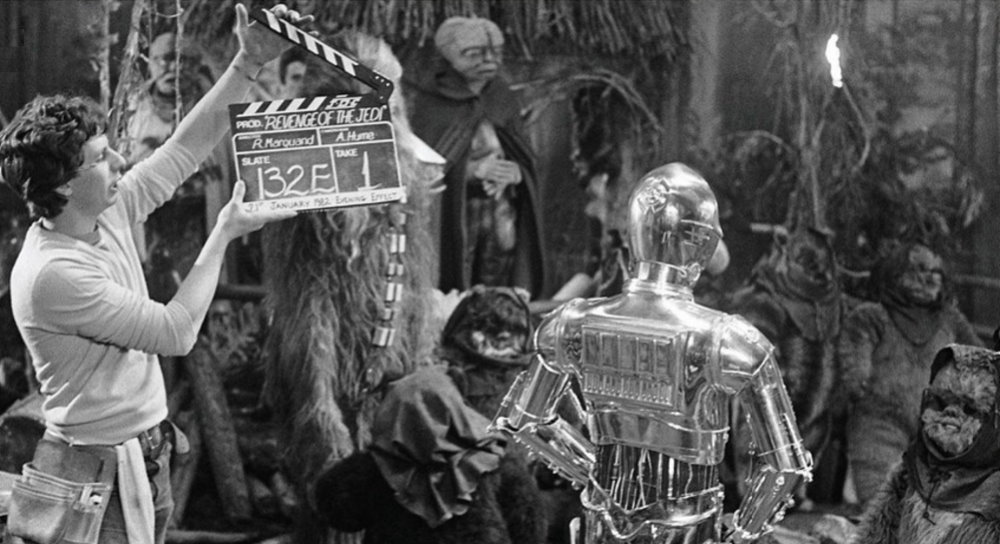 From Jawas to Lanais, the Star Wars universe has always been populated by many alien, intelligent lifeforms. It’s time to put some non-humans in the spotlight who lurked in the background, but who have acquired their rightful place in fandom for different reasons. 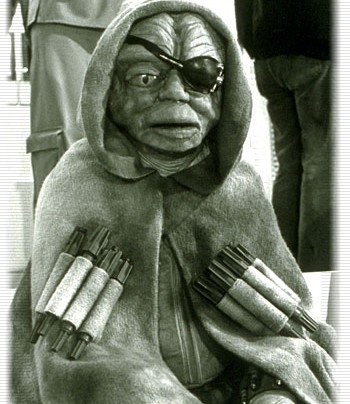 Action figure fame
For Return of the Jedi George Lucas instructed Phil Tippett, head of the creature workshop, to design and develop a huge amount of new alien characters, most of them were to populate Jabba’s Palace. One of these species would end up joining the Rebel Alliance: a species called ‘Prune Face’. Their design was made into a figural maquette as were all the other new species. Prune Face was labeled as species 35 in the list of Jabba’s Palace aliens, while Nilo Rodis-Jamero gave the Prune Faces their camouflage and rebel outfits in sketches, dated 1981. Maybe it was decided after revising the list of Jabba’s palace that Prune Face would rebel, but it may also have been possible that they had always been considered as Alliance soldiers. 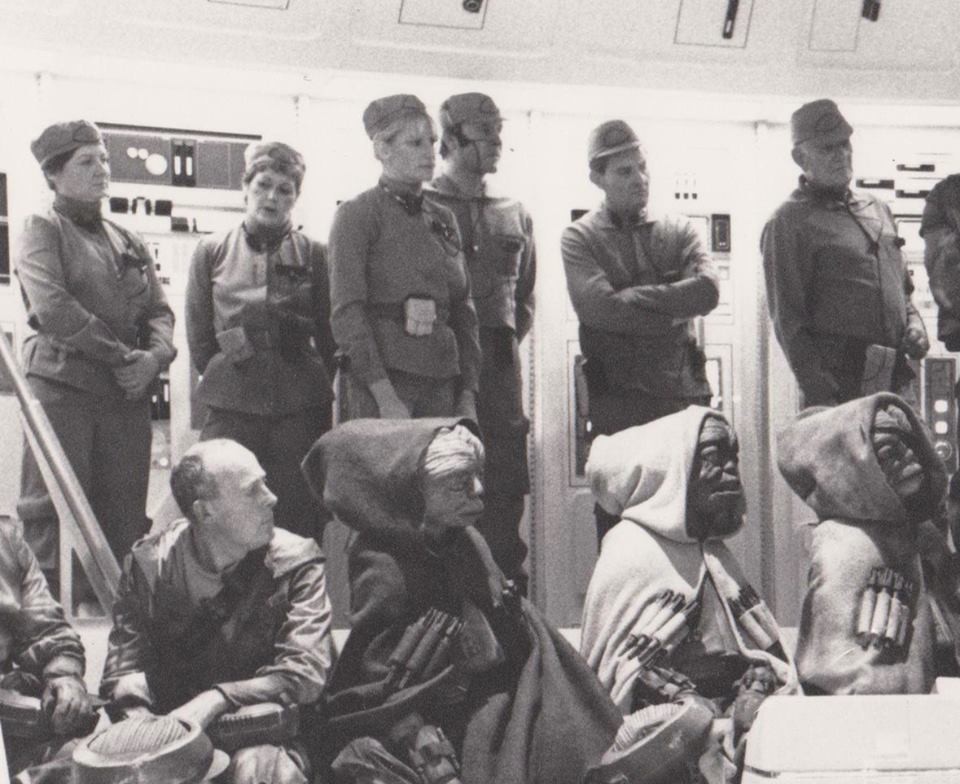 Three different members of the ‘Prune Face’ were made. These three individuals can be identified by the color of their two-third cut cloaks. Underneath their cloaks, the aliens wore typical rebel camouflage attire, including a commando vest used on Hoth in Episode V. 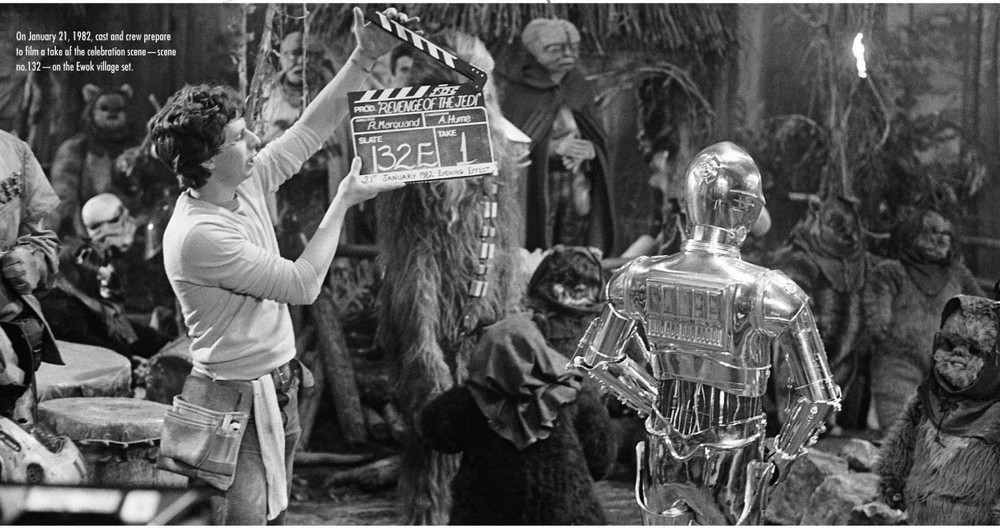 These three characters can be seen at the Rebel Alliance assembly at Home One, but they can also be seen at two other occasions in the movie. The one with the dark cloak enters the stolen shuttle Tydirium just before Han and Lando say their goodbyes in the Home One hangar. The dark cloaked individual and the one with the light cloak (Panno) can also be spotted at the festivities at the end of the movie in the Ewok village.

The obscurity of the Prune Faces ended when Kenner decided to produce an action figure of one of these aliens (the one with the eye patch) in their second wave of Return of the Jedi. Kenner used the name that was given to the species by the production: Prune Face. The figure came with a removable cloak, made from soft fabric, and a rifle. Although Kenner used a promotional photo with a rebel type background, a lot of fans were probably puzzled. Who was Prune Face? Where did he come from?

We mustn’t forget that fans weren’t able to study every shot of the movie in detail without an available VHS, dvd or digital copy. Since so many aliens appeared in Jabba’s Palace, a lot of fans assumed that he must have been one of Jabba’s goons. Kenner might not have known it either, because in one of their coloring books from Episode VI, they depicted Prune Face in Jabba’s Palace. Anyhow, this particular Prune Face would become the most popular member of his species, thanks to Kenner.

A proper name and species
Prune Faces were listed in ‘The Making of Return of the Jedi‘ by John Philip Peecher, but no trace was found in ‘A Guide to the Star Wars Universe‘, the first published Star Wars encyclopedia (1984). Time passed by and Prune Face probably often continued his life as a member of Jabba’s retinue.

This would all change in 1995 when West End Games published ‘Galaxy Guide 12: Aliens – Enemies and Allies’. This sourcebook for the WEG Roleplaying Game included the Prune Face species, now renamed Dresselian (*). This entry not only gave the Prune Faces a proper in-universe name, it gave their species an entire background. The entry also showed a photo of the character Kenner had turned into an action figure. He was now named Orrimaarko and was finally confirmed as a Rebel Commando! It was Pablo Hidalgo who wrote the entry of the Dressellians and he named Orrimaarko after a friend of his, Orrin Marko. 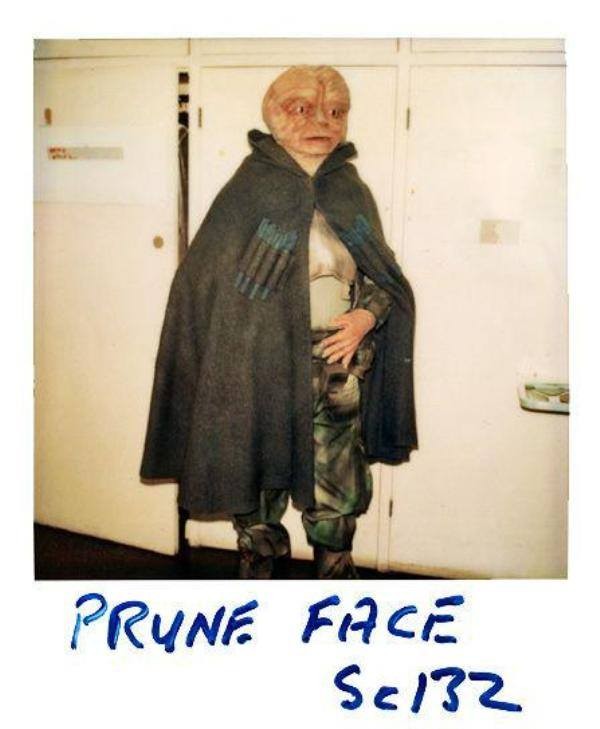 In 1998 Hasbro made a new figure of Prune Face, now named Orrimaarko, in their ‘Power of the Force’ line. The figure came with a freeze frame dia, a non-removable plastic cloak and his rifle. In that same year, he also made an appearance in the game ‘Rebellion’ (with a black cloak).

Now that his proper name had been established, Orrimaarko began to appear in more books and he received his own CCG Card in the Endor Expansion pack. Decipher used a promotional photo of Orrimaarko against a different background for his card. His background slowly began to expand with a short in-universe tale in ‘The Essential Guide to Alien Species’. His rifle got labeled as a Dressellian Projectile Rifle.

Modern times
The Dressellian with the light gray cloak had also been given a name by Decipher in their CCG: Major Panno. Hasbro would release an action figure of Panno in 2009, but they gave him a dark cloak instead of the light one. In 2010 Orrimaarko (as Prune Face) made a (funny and) remarkable appearance in ‘Robot Chicken: Star Wars Episode III‘. In 2012, Hasbro released Orrimaarko in their Vintage Collection line with a lot of articulation, a soft cloak, rifle and a removable tool.

‘Stay on Target’, a Roleplaying Game book from Fantasy Flight Games (2014), featured Orrimaarko, Panno and another Dressellian, called Neeralli. He was meant to be the third Dressellian from Episode VI, but since no picture linked the name to the character, an official link was never established between the name and the (still) unnamed third Dressellian from the movie.

Not that long ago the unnamed Dressellian was featured in the ‘Galaxy of Adventures’ episode: “Han Solo – From Smuggler to General”. It shows us that these three freedom fighters haven’t been forgotten and that they might pop-up again somewhere in the future!

Although Orrimaarko has only appeared in one movie for a couple of seconds in the background of a crowded scene, Prune Face gained fandom fame when Kenner turned him into an action figure. Except from being turned into three action figures, very little merchandising of Orrimaarko exists today. Funny thing is, we never truly see Orrimaarko on Endor and we aren’t even sure that he boarded the Tydirium. We can see the two other Dressellians at the end of Episode VI, but there’s no trace of Orrimaarko. While canon books mention that he was part of the Rebel Strike Team on Endor, there is no visual evidence of that fact in the movie itself.

(*) The spelling has changed from one to two L’s.

Tim Veekhoven (Sompeetalay) from Belgium is president and co founder of TeeKay-421, the Belgian Star Wars Fanclub. He has contributed to StarWars.com, Star Wars Insider (Rogues Gallery), Build the Millennium Falcon and is an administrator for Yodapedia.