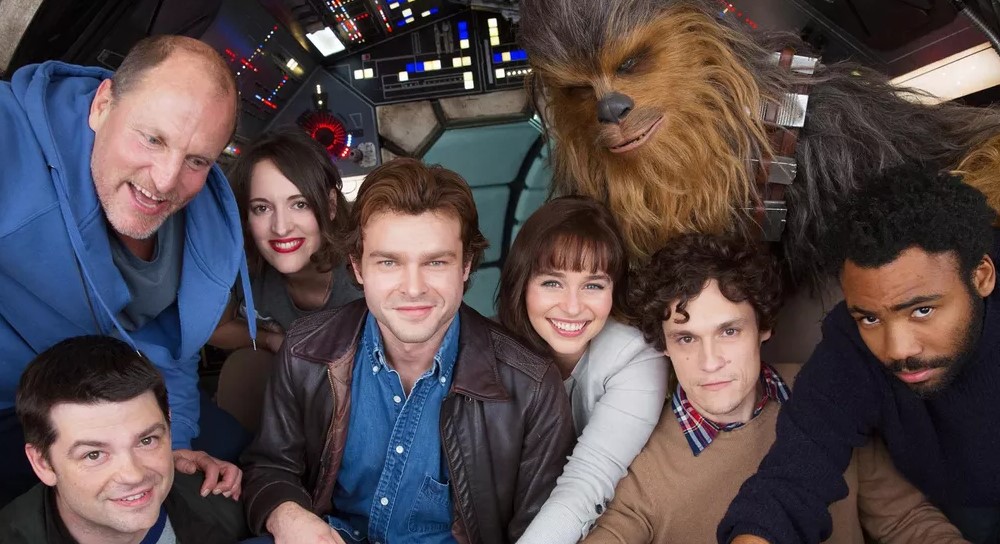 Henry Davies an aviation consultant on Solo: A Star Wars Story discusses his role and experiences on the film with Cornwill Live – including teaching Han Solo how to fly the Millennium Falcon!

‘It was the best thing to happen to me in my life, including getting married and having kids,” Henry told me, risking a domestic of intergalactic proportions.

“So there I was at Pinewood, with four massive sound stages, wearing a Lucasfilm badge … it was unbelievable. It took all the professionalism I’d learned in the Navy to remain coherent,” recalled Henry, a huge fan of the Star Wars movies since he was six.

He was led to the cockpit of the Millennium Falcon which was on a hydraulic rig surrounded by 80ft high silk projection screens, enabling the actors to see what they were flying through.

One of the actors approached him and started discussing what the plan was.

“It was Childish Gambino [actor Donald Glover] in full Lando Calrissian costume. I had to remind myself, just be cool.”

It was then that Henry found himself as an “aviation adviser” surrounded by actors Alden Ehrenreich (Han Solo) and Joonas Suotamo (Chewbacca) as well as Woody Harrelson, director Ron Howard and writer Jonathan Kasdan.

“There are no galactic cruisers anywhere so you have to work with what you’ve got,” added Henry. “So it was a vehicle that can take off vertically and can be armed. I thought, that’s part of my remit as a former helicopter pilot.”

“I was showing Han Solo how to start up the Millennium Falcon – it was super exciting.

“At one point I had Han and Chewie right in front of me alongside Woody Harrelson with Childish Gambino behind me. Then someone said they wanted to introduce me to someone and it was Emelia Clarke. I’d completely forgotten the Queen of Dragons was even in it!

After showing them the workings of the cockpit, Henry said Ron Howard and Jonathan Kasdan were struggling for dialogue, suggesting a line about “more power to the thrusters”.

Henry suggested they wouldn’t call them thrusters, it would be the engine.

“Suddenly, I was contributing to the dialogue,” said Henry, still reeling at the memory.

He then talked the actors through the Kessel Run sequence, which way they’d be thrown about, which buttons to push, where to pull hard, all ending with Howard crying “cut, that was perfect”.

For the full fantastic interview, click the link to Cornwall Live.