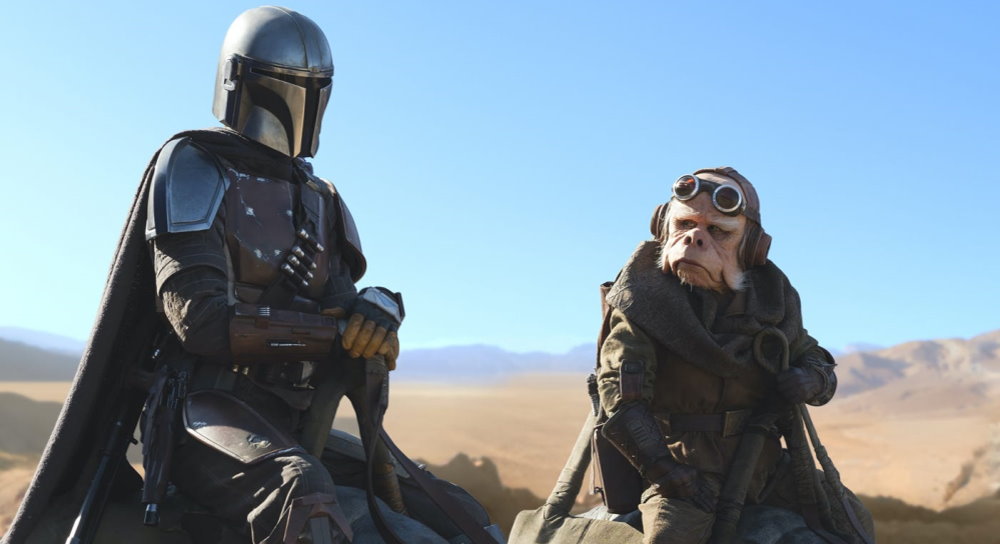 I gotta say, above all else, the Disney + show The Mandalorian is fun. So many elements remind me of my childhood, surrounded by Star Wars toys and ideas. Which is exactly the way Jon Favreau and Dave Filoni intended it to be. The showrunners, along with J.J. Abrams and Rian Johnson, grew up with Star Wars in their lives and it inspired them to be filmmakers. Which is great, by the way! I thought I’d share some of my thoughts about these fine moments in The Mandalorian that harkens back to a different time (and a galaxy, far, far away)….

The first episode was like playing with your favorite bounty hunter action figures at the same time. Boba Fett! IG-88! Miscellaneous Jabba Guards! You had a mission to go on just like a Roleplaying Game or video game. Oh, and Baby Yoda. I mean, he’s so frickin’ cute and adorable! He’s a real puppet, just like the Frank Oz Yoda of the 1980’s. It gave him and the show a “real” quality that just felt Star Wars.

The second episode did it for me. Then I knew Filoni and Favreau had ME in mind when they created this series. Offworld Jawas (“Utinni!!”) have stripped the Mando’s ship to the bare bones. They stole everything that was nailed down and then some. Now I know this scene was supposed to be like Indy getting beat up by a tank in The Last Crusade but I saw something different. 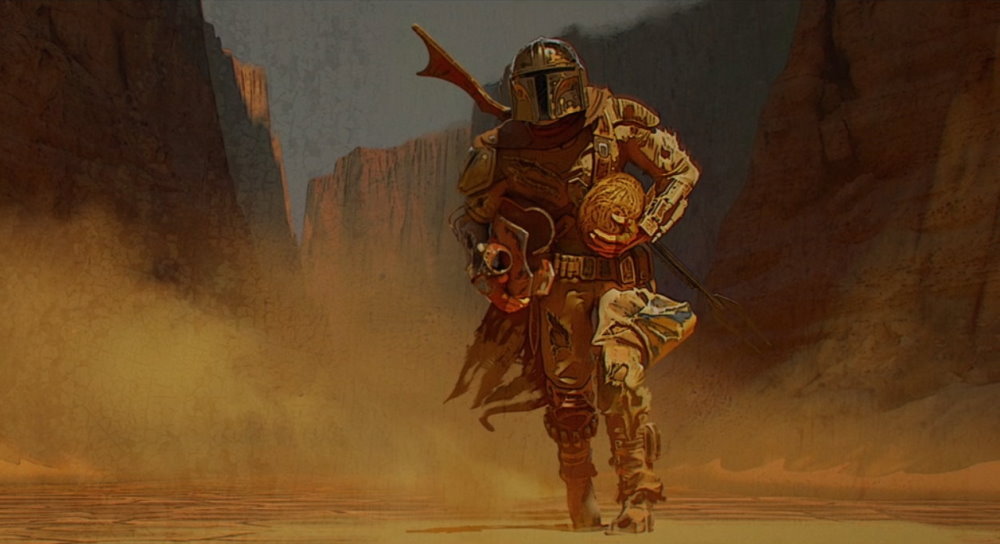 When I was a kid (post-Empire), one of my fellow school kids had a remote controlled Jawa Sandcrawler and everybody drove that thing around the playroom like we were a racecar driver, crashing into things, going around our own obstacles. When the thing worked, that is. So much fun. Plus, I was yelling “Sukkah!” for days after this episode. That egg reminded me of a Cadbury Crème Egg from Easter. Also, Baby Yoda can use the Force!! 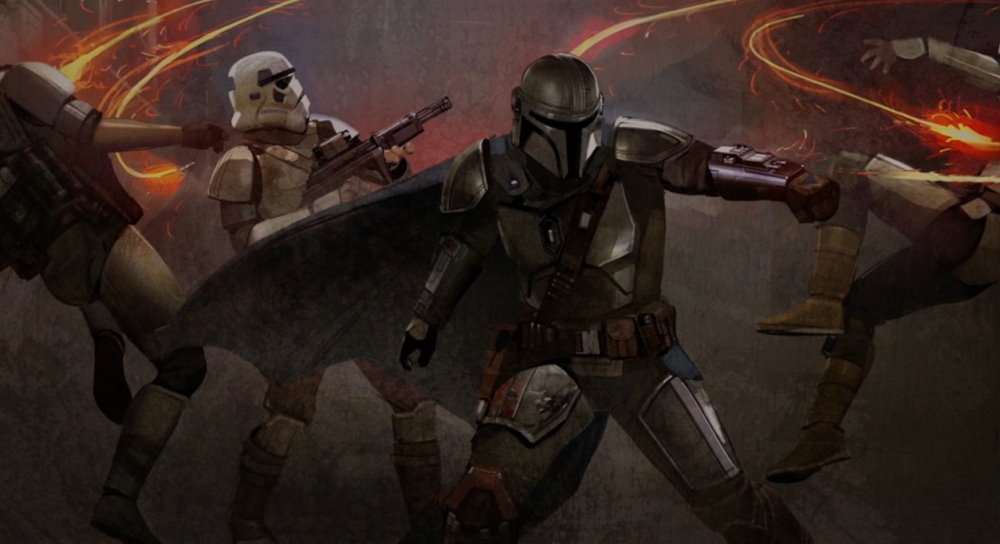 Episode 3 featured a ton of Mandalorians – something that the old school fan could only achieve with multiple figures of Boba Fett. But, it did fulfill my Republic Commando wish to see a crew of Mandalorian warriors on-screen. 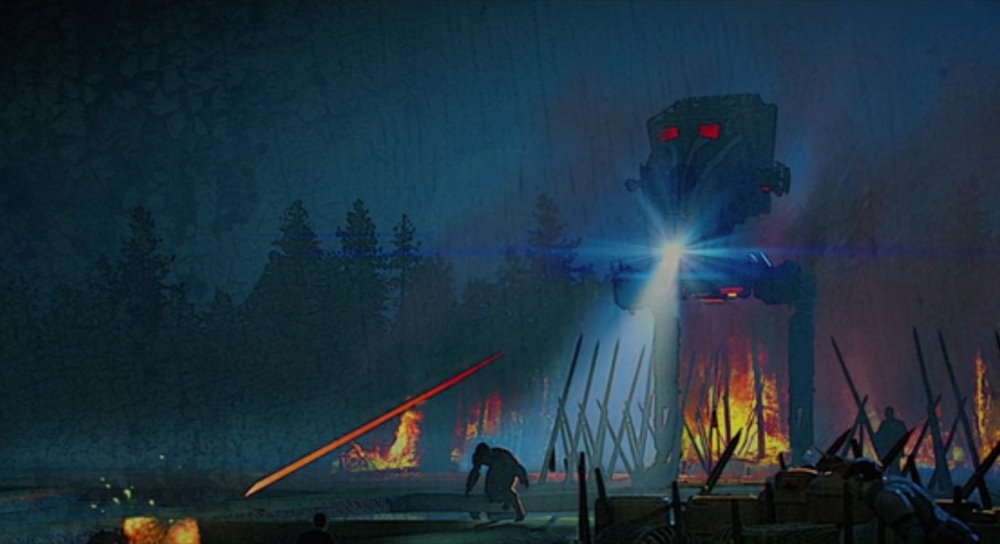 Episode 4 had a customized AT-ST, all painted up by a bunch of backwoods Marauders. A Chicken Walker! Now, these things weren’t as cool as an AT-AT toy, but they took up less space and were easier to play with. Hasbro had already released the toy of this version but it was still neat seeing it on-screen, especially with the red lights inside and causing real damage not to Rebels, but innocent civilians. 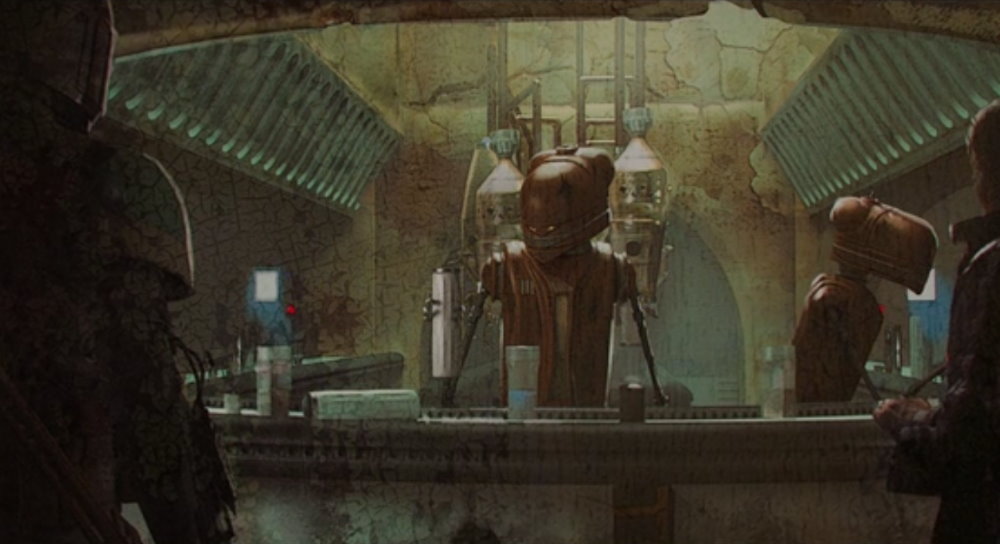 Episode 5 on Tatooine brought back a whole bunch of A New Hope memories – The Mos Eisley Cantina (now populated by droids and cocky wanna-be bounty hunters), sign-language speaking Sand People (which was a great little detail) and the endless desert. The episode also had my all-time favorite Star Wars vehicle, the speeder bike. Who didn’t want to race through the forest at super speed on a space motorcycle? It also featured The Calvary herself, Fennic Shann.

Plus, we know have a double mystery: where did Baby Yoda come from and WHO WAS THE GUY IN THE DESERT AT THE END? Was that actually Boba Fett? In the ye olde Expanded Universe, we know that Boba survived the Sarlacc Pit at the end of Jedi and went on to have a lot of adventures. In the new Disney universe, we’re pretty sure Boba survived (or at least his armor on Tatooine) but that has yet to be confirmed outside of book speculation.

The Mandalorian shows that the showrunners grew up with Star Wars and having fun with their new stage. Kids who buy The Mandalorian action figures and vehicles are going to have a great time.