Official summary: The Mandalorian comes face-to-face with an unexpected enemy.

The two biker scout troopers are played by Adam Pally and Jason Sudeikis (Saturday Night Live). Of course them being unable to hit a can with their blasters (the same kind of EC-17 hold-out blasters as seen first in Return of the Jedi) brings back the old joke of stormtroopers being unable to hit anything. They are also quite reminiscent of Tag and Bink from the old Dark Horse comics, who somehow ended up blundering their way into every important moment from the first six Star Wars movies.

One of the scout troopers mentions that IGs are mostly hunters, which is somewhat true. The well-known IG-11 and IG-88, as well as the IG-86 series, are indeed bounty hunters, but the IG-series of Holowan Laboratories included other models like the IG-Lancer droids (originally from Genndy Tartakovsky’s Clone Wars) and bodyguard droids like the IG-100 MagnaGuard or the IG-RM. 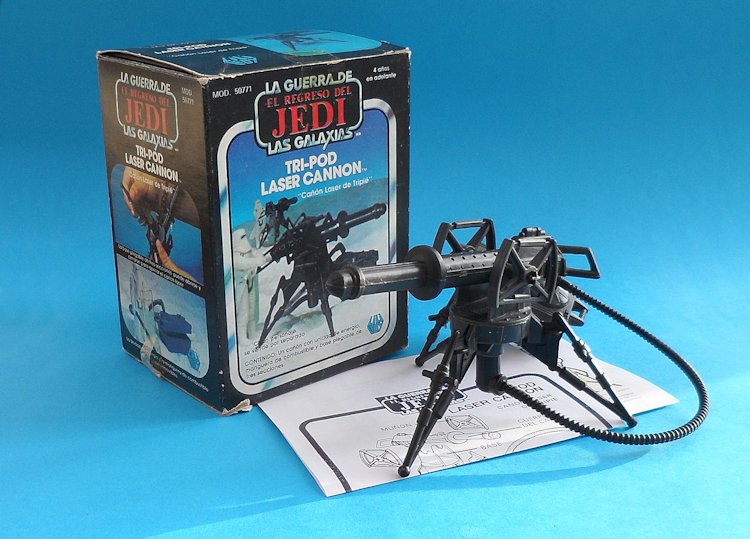 The Imperials set up a newer version of an E-Web heavy repeating blaster cannon, which was first seen in The Empire Strikes Back.

A lot of new information comes directly from Moff Gideon. We learn that the full name of Cara Dune is actually Carasynthia Dune, and her homeworld is Alderaan, which explains why she wears the Rebel starbird as a tattoo on her face.

The full name of the Mandalorian is Din Djarin. His signet becomes that of the mudhorn, his clan is a clan of two with the Child being the other, who helped him defeat the beast.

The Siege of Mandalore is spoken about, including the death of many Mandalorian recruits in what Gideon poetically calls ‘The Night of a Thousand Tears’. Gideon himself was an ISB Officer during the Great Purge. ISB stands for Imperial Security Bureau, an intelligence agency that was charged with matters of state security and ensuring the loyalty of citizens to the Empire. 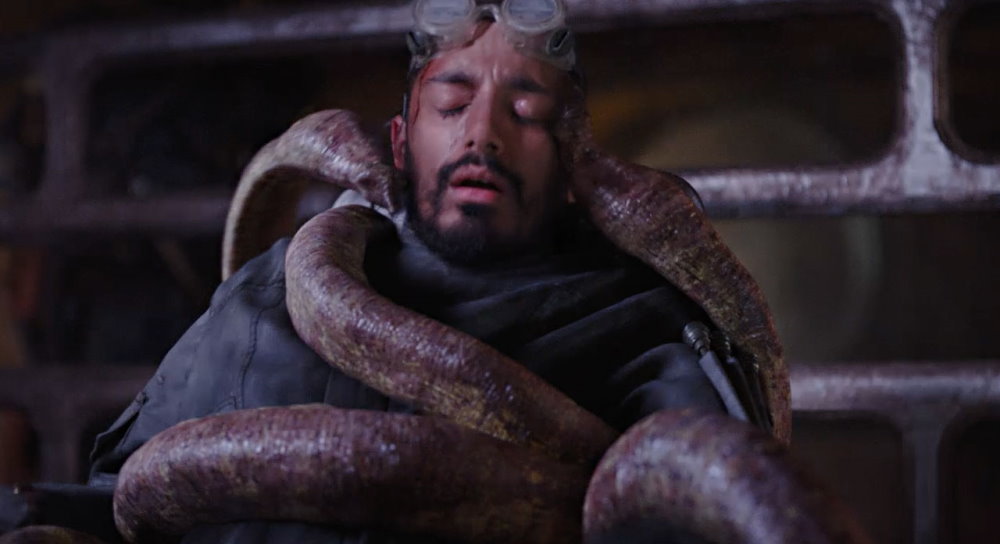 Mind Flayers are not necessarily a reference to the D&D creature that was also seen in Stranger Things, but rather it is a reference to the Mairan species that included Bor Gullet from Rogue One. Making them very real, despite Creef thinking they were just wartime propaganda.

Always a hot topic for discussion used in the debate regarding Jango and Boba Fett being Mandalorians or not, this episode confirms at least that Mandalorian is not a race, but a creed. 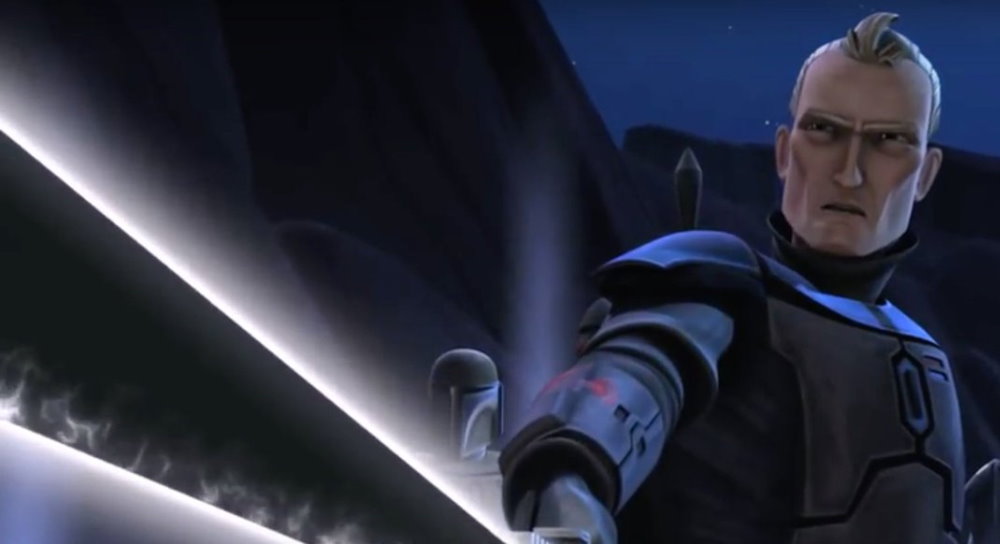 The full flashback is seen, and with it the earlier mentioned Clone Wars elements. But this time we see who rescued the young Din Djarin. This unnamed Mandalorian is played by Brendan Wayne, the grandson of the famous John Wayne. Brendan Wayne was also the body double of Pedro Pascal’s Mandalorian. And in this flashback scene we see the Mandalorians wearing the symbol of the Death Watch. This makes a lot of sense considering we have seen them fight against the CIS of Dooku before, but also against the Republic. The Death Watch is often associated with the Vizsla Clan, one of whom has appeared (most likely with the name containing a typo) in Chapter 3: Paz.

Talking about Paz, his helmet is NOT seen among the pile that they encounter in the covert.

The Jawas of Nevarro have the same red eyes as the Jawas of Arvala-7.

The stormtrooper with the flamethrower is an Incinerator Stormtrooper, first seen in the game The Force Unleashed. 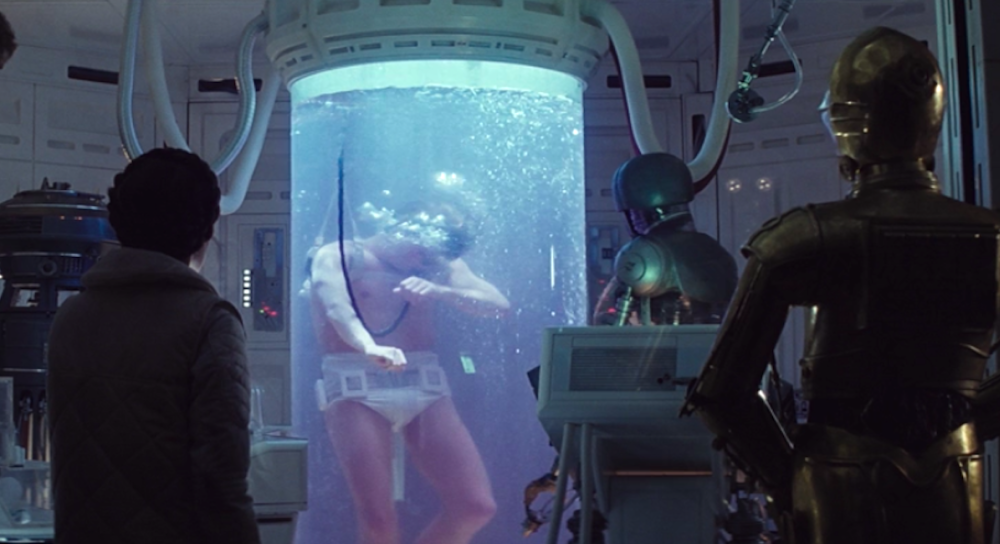 Bacta spray is something that we have seen before, but not often. It appeared in Legends in Star Wars Galaxies and Republic Commando: Triple Zero before making the jump into canon with it being mentioned in Adventures in Wild Space: The Escape.

Greef mentions that the scum and villainy of Nevarro has been washed away, Obi-Wan first used those words to describe Mos Eisley.

Newly introduced: Mandalore the Great, the Rising Phoenix (teachings for flying with a jetpack) and an unidentified mammal lurking in the sewer.

The Child meets Danielle Nicole handbags: This is the bag you’re looking for…

Manhattan Beach Studios, home of The Mandalorian, sells for $650m

George Lucas watching Dave Filoni on the set of The Mandalorian Season Two: “He was like a boxer’s corner man coaching him”