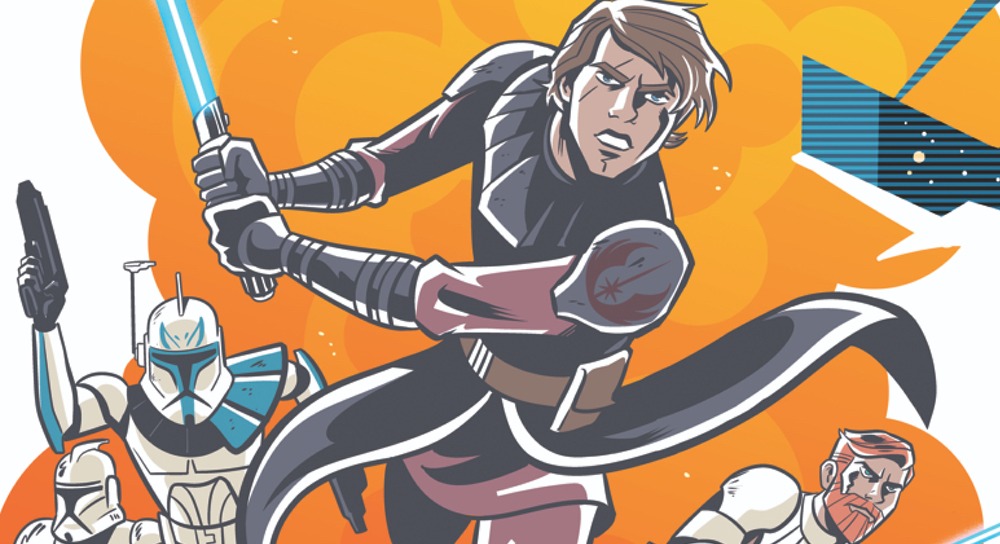 IDW have announced a new five-part comic book event to celebrate the return of The Clone Wars TV series on Disney+.  The series to be called “Star Wars Adventures: The Clone Wars – Battle Tales” will release weekly during April.

The series is to be written by Michael Moreci with art for the framing sequence in each issue by Derek Charm.  Each issue will spotlight a different artist. Arianna Florean(issue #1), Megan Levens (#2), Valentina Pinto (#3), Davide Tinto (#4), and Philip Murphy (#5).

Check out the full press release below: 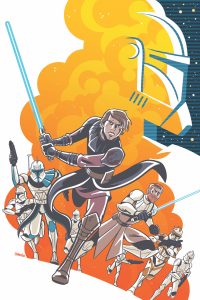 While the galaxy may be divided, fans certainly won’t be when IDW Publishing launches a new campaign in the conflict between Republic and Separatists with the all-new Star Wars Adventures: The Clone Wars – Battle Tales comic book miniseries!

While Obi-Wan Kenobi, Anakin Skywalker, and other Jedi Knights fight against incredible odds, Commander Cody, Captain Rex, and other clone troopers are pinned down for the duration, swapping war stories that feature favorite characters from The Clone Wars animated series, such as Padmé Amidala, General Grievous, and many more!

“The Clone Wars era is probably my favorite in all of Star Wars. It has it all – big adventure, sweeping romance, Force mythology, Jedi powers, and, of course, the awesome clones,” says Moreci. “This event series is going to bring together all the best, evergreen parts of Star Wars and weave a story that longtime fans (like myself) and new, younger readers (like my own kids) will definitely love.”

“This era of Star Wars feels so expansive and open as far as storytelling possibilities, so I’m really excited to be able to spend a good amount of time in it,” says Charm. “I’m really looking forward to finally working with Michael Moreci, as well! We’ve sort of been orbiting each other in the monthly Star Wars Adventuresbook for a while, but this will be our first time working together. We’ve talked about some of the things he has planned for this series, and it’s going to be pretty great.”

“Ever since it was first mentioned in A New Hope, the Clone Wars have ignited the imaginations of Star Wars fans,” says Star Wars Adventures editor Denton J. Tipton. “We are honored and excited to build upon that mythos on the shoulders of giants like Genndy Tartakovsky and Dave Filoni.”

Each issue of Star Wars Adventures: The Clone Wars – Battle Tales will feature covers by Derek Charm, including spot-color retailer incentive covers. An additional Retailer Incentive variant for issue #1 will be available featuring the artwork of Michael Avon Oeming (Powers, The Mice Templar).

Comic-Con@Home 2020: IDW Return to Mustafar in Shadows of Vader’s Castle