Official summary: The Mandalorian helps a rookie bounty hunter who is in over his head.

Trivia: The bounty hunter attacking the Mandalorian in space is Riot Mar and was played by Rio Hackford. 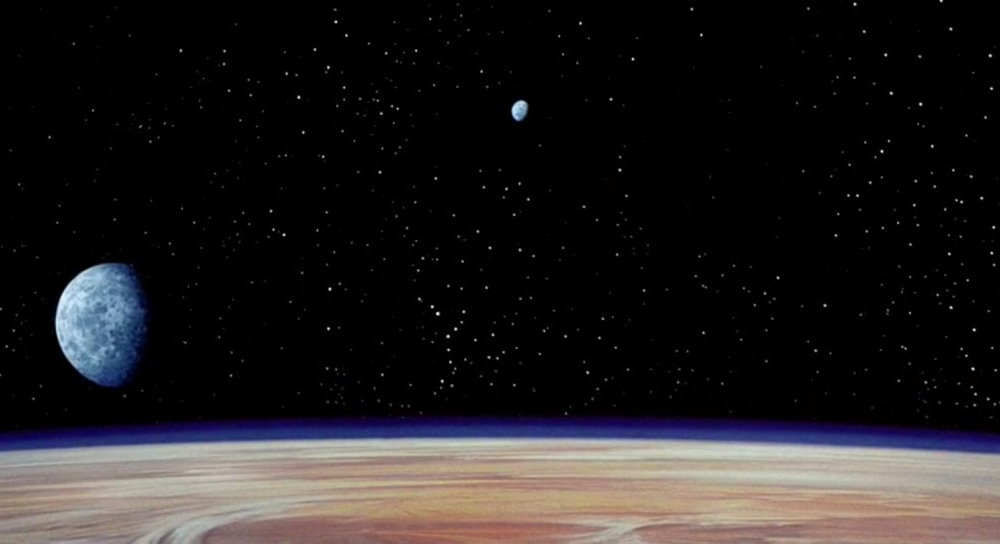 In a series full of lovely nods to previous Star Wars stories, it’s surprising that it took this long before we arrive at a planet that we have seen before. Of course that honor goes to Tatooine, the planet seen the most in the movies. This episode contains many loving nods because of it. It starts with the fly-by of the Razor Crest towards the planet using the very first image we saw in A New Hope, the Ralph McQuarrie matte painting of Tatooine, and Mos Eisley which reuses footage from A New Hope when Luke, Obi-Wan and the droids were looking towards Mos Eisley. This means that, from a certain point of view, the Tunisia and Death Valley filming locations also return.

The voice of the Mos Eisley Spaceport Operator is Steve Blum, who did many voices and is most known for Zeb in ‘Rebels’. 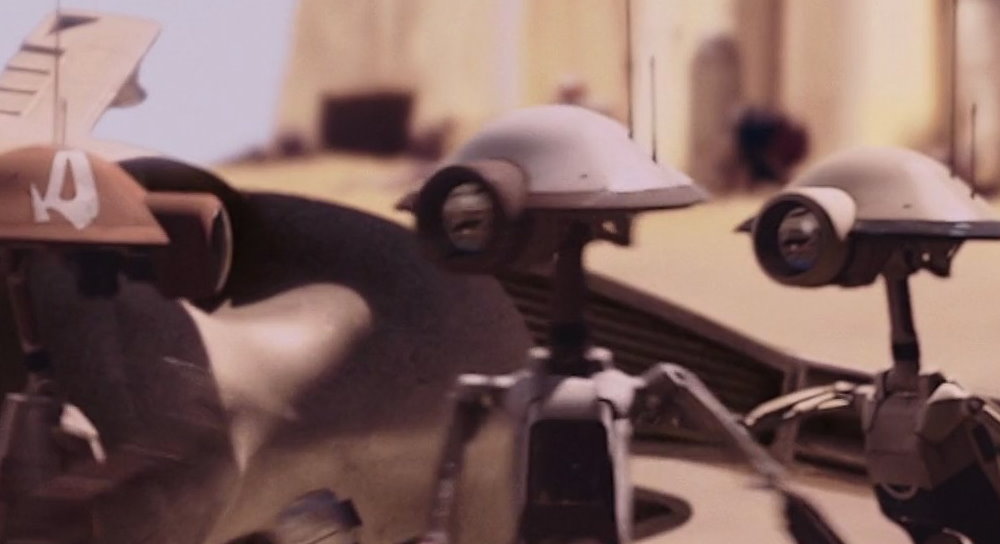 Bay Three-Five may be new, but the entrance is a recreation with the same style numbering of Docking Bay 94. Working there is Peli Motto (played by Amy Sedaris) and her three pitdroids. They like to play Sabacc.

Well-known Tatooine elements that return: Ghomrassen & Guermessa (two of the three Tatooine moons), the Mos Eisley cantina (clearly Wuher does not work there as it is taken over by droids), the Dune Sea, Hutts, womp rats, banthas with Tusken Raiders (wielding a Gaderffii stick), dewback, twin suns, Mos Espa (mentioned) and Beggar’s Canyon. 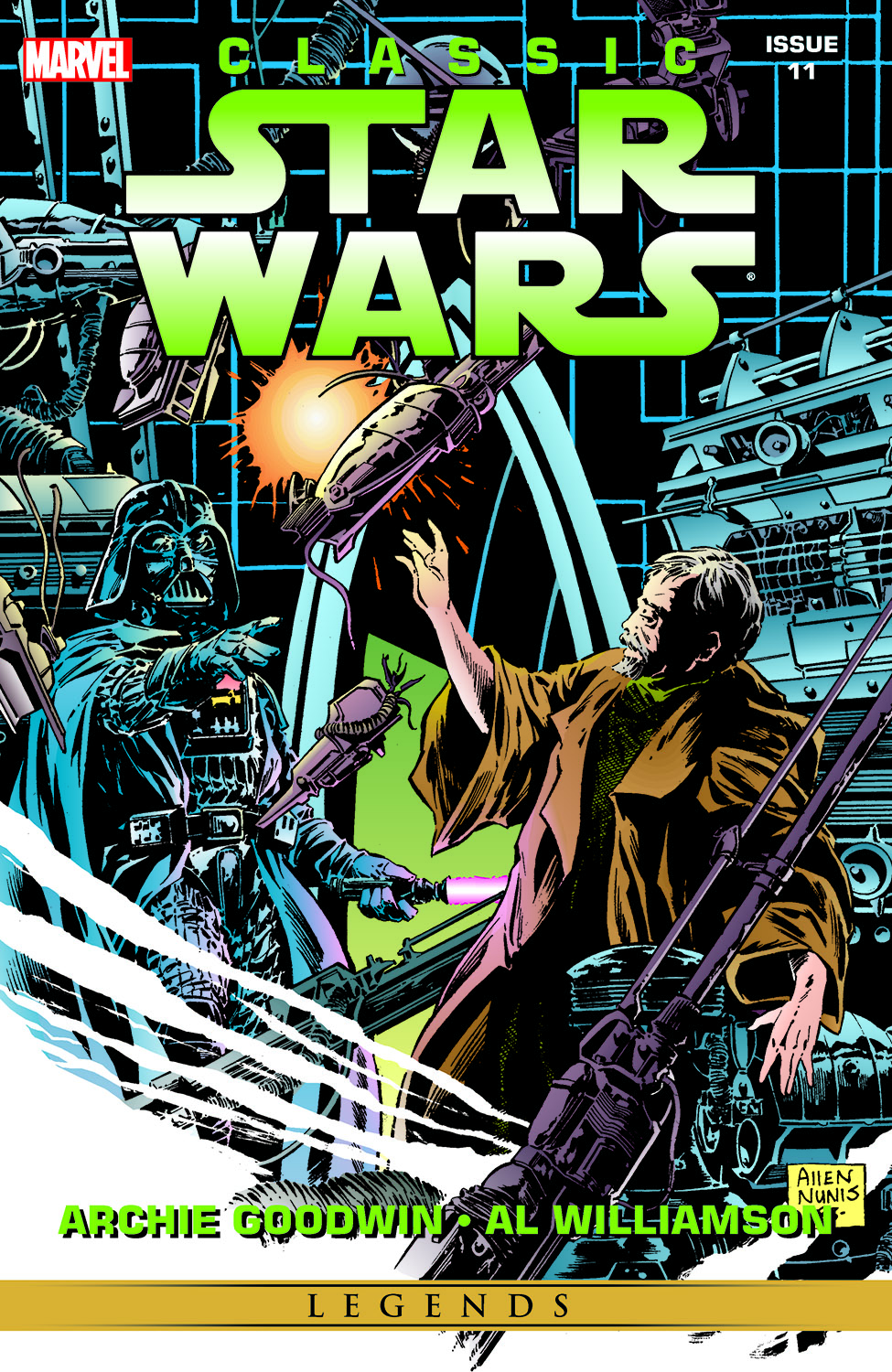 A new amphibious sentient species can be seen in the Cantina. Without an episode guide or Visual Dictionary it is still guessing what species this is, but it looks a lot like the Chubbits from Classic Star Wars #10 & #11. Another possibility is that this a Rybet, as a recent ‘Star Wars By the Numbers’ revealed that an arm in Jabba’s dungeon was that of a Rybet also.

Another new alien species is that of the fly-like species sitting at the bar. While this brings Tzizvvt (a male Brizzit seen in ‘A New Hope during’, indeed, the Cantina scene) to mind, this appears to be a new species as the body and arms are less humanoid.

The rookie bounty hunter from the official summary is Toro Calican and was played by Jake Cannavale. Together with the Mandalorian he hunts Fennec Shand, who was played by Ming-Na Wen (ER and Marvel’s Agents of Shield).

The speederbike that the Mandalorian uses was seen at Celebration Chicago and received the name of it being a Mobquet Zephyr-J, which is a model similar to the Zephyr-G that Owen Lars owned in Attack of the Clones (and that Anakin used to find his mother). The one flown by Toro appears to be new. 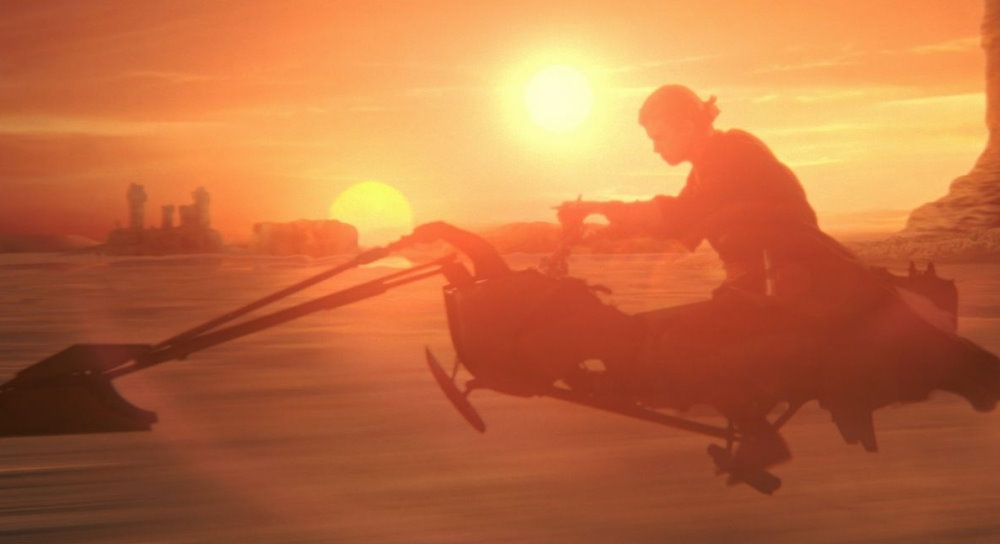 The Guild planet that went unnamed in previous episodes, has got a name now: Nevarro.

And at some point during the episode a character has the high ground, echoing the Mustafar stand-off between Anakin and Obi-Wan in Revenge of the Sith.

The cliffhanger of this episode introduces a new mystery character, and while speculation is high, there is only one decent clue: the audio effect used is that of cowboy boot spurs. The only time we heard this before was whenever we hear Boba Fett walking. Which does not have to mean that it is Boba Fett, but it is a possibility….

The Mandalorian DP Greig Fraser on Stagecraft: “The beginning of something extraordinarily powerful”

The Mandalorian original novel is delayed until Autumn 2021

Comic-Con@Home: The Mandalorian: Mondo to release 8 disc vinyl box set of the season one soundtrack

The Art of Star Wars: The Mandalorian: Release date brought forward to November

How Baby Yoda was created