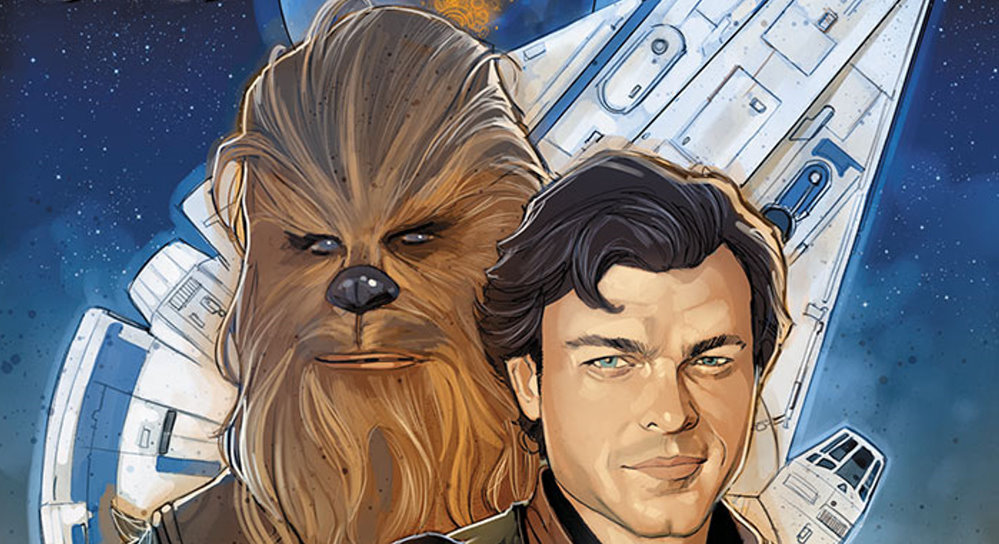 FEATURING BACKSTORY AND SCENES NOT SEEN IN THEATERS!

A long time ago in a galaxy far, far away….

On the shipbuilding planet of Corellia, the foul LADY PROXIMA forces runaways into a life of crime in exchange for shelter and protection.

On these mean streets, a young man fights for survival, but years to fly among the stars….

The Last Jedi comic and novel adaptations gave us extended elements to their on-screen counterparts, and Mur Lafferty’s excellent Solo: A Star Wars Story novel widened the widescreen edges of the young Han Solo movie. Now, almost 6 months after the release of the film, Marvel bring us their Solo adaptation and once again we’re treated to extended, unseen scenes. Drawn by Will Sliney and written by Robbie Thompson, this launches us into Han’s adventures right before the film begins as he steals a Mobquet M-68 landspeeder on a mission for Lady Proxima.

It’s fast and pacey, suiting the source material well, and the muted tones of Corellia are translated perfectly to the drawn page by Sliney and colourist Federico Blee. That pallete is deftly tweaked from the steel streets of Corellia to the muddy trenches of Circarpous V, better known as Mimban. Here, Solo is dragged into the Imperial occupation of the planet and the brutal fight against the native Mimbanites, but not before a pit stop on Carida where we briefly see Solo training to be an Imperial officer and watch the cut scene featuring the unfortunate Ramon Tikaram as a high ranking Imperial officer. We’ll be seeing more of that era in the just-launched Han Solo: Imperial Cadet. Back on Mimban we follow the flow of the film faithfully, where you can almost taste the mud and grime and feel the wet slap as Han is hurled through a grate in the floor into the lair of the beast (very much like Luke was in Return of the Jedi when Jabba banished him to face the rancor).

Sure, we know where the story is going and what’s ahead, but Marvel and Lucasfilm have been canny in layering in just enough additions to make it interesting, and with artwork of this high quality it proves they’re not coasting. Nothing is a sure thing, nothing is guaranteed, and with a wave of new live action and animated projects coming our way it’s more vital than ever that Lucasfilm maintain their quality levels as more and more eras of the saga are opened and investigated.

The first issue of Solo – wrapped in an exquisite cover by the if-he’s-not-legendary-already-then-he-should-be Phil Noto – promised much and delivered on it. Much like the film that inspired it.