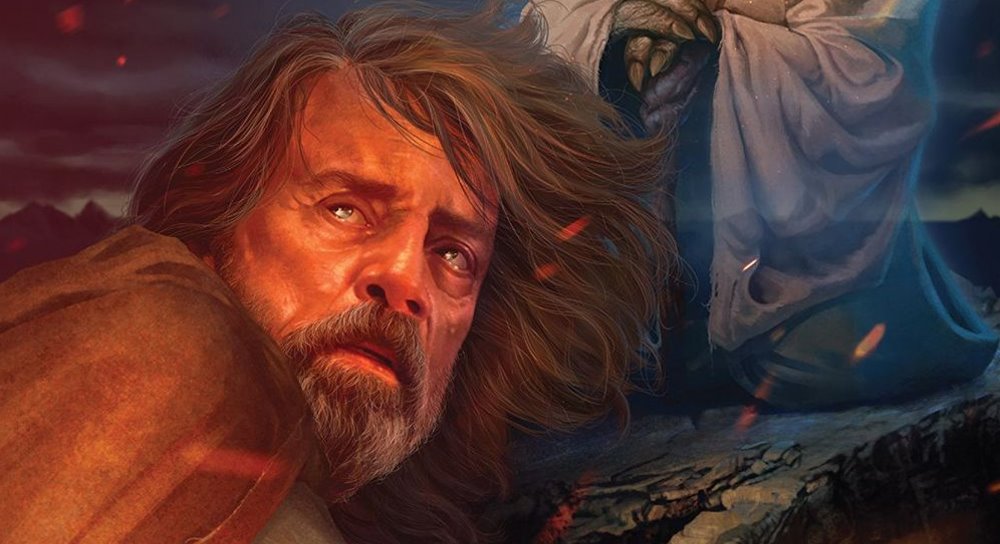 AS THE PAST DIES, THE FUTURE BECKONS…REY gambles everything as she heads for a confrontation with KYLO REN and SUPREME LEADER SNOKE. As the fate of the RESISTANCE hangs in the balance, will POE DAMERON risk mutiny to take matters into his own hands? And who is the mysterious visitor coming to offer counsel to LUKE SKYWALKER? (SPOILER ALERT, it’s YODA!) 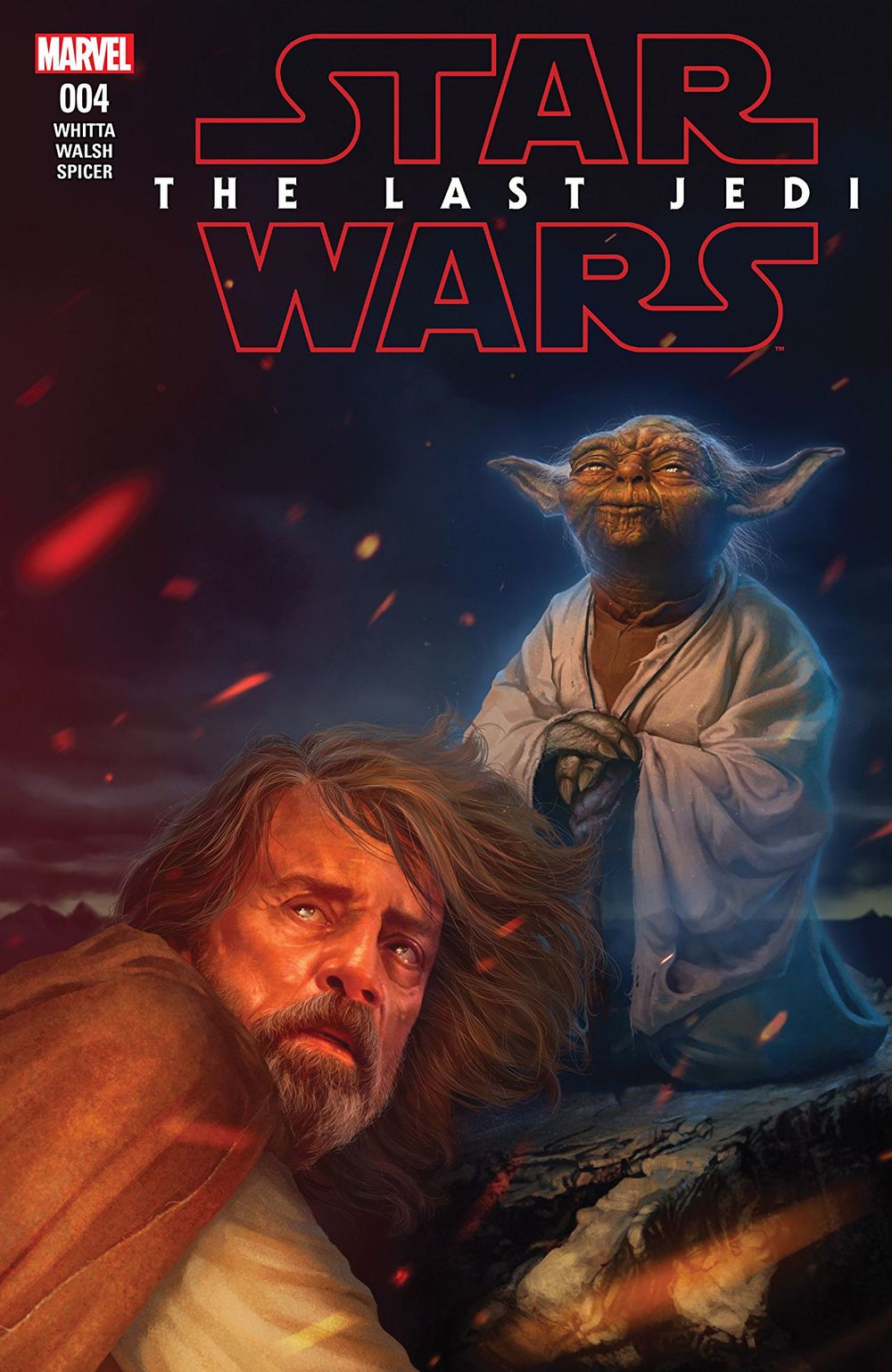 The comic adaptation is an integral pillar of Star Wars licensing, merchandising, and fandom. Since April, 1977, under Roy Thomas and Howard Chaykin’s steady hands and direction, Star Wars fans who didn’t know they were Star Wars fans yet had their first step into a larger galaxy. The first six issues of the original adaptation were funky. Take a quick glance at Vader’s bulbous, green head on the cover and you know the whole vibe. Based off production photos and an early script of Episode IV, a lot of liberties were taken. The great deleted scenes that we may never see integrated into A New Hope are boldly displayed for all to see right there in issue #1. Luke watches the Tantive IV chased by Vader’s Star Destroyer through his macro binoculars and attends Biggs’ homecoming. We get a feel of American Graffiti in space. This tradition followed through The Empire Strikes Back adaptation where Yoda’s depiction looks closer to Ralph McQuarrie’s concept than Frank Oz’s puppet. While these touches were not true to the end film result, they act as artifacts of a more humble age of the brand and licensing. An age when the artistic contributors and creators added some additional spice.

Most comic adaptations coming out in this third great age of Star Wars are strict adaptations. There are marked deviations from this rule. Rogue One added some unseen moments-if not complete scenes- that incentivized the fan to pay the $3.99 admission fee. We saw some flavor in Jyn’s relationship to her cell-mate before K-2’s break out. We also got a couple flashback vignettes from Jyn’s early militant days. 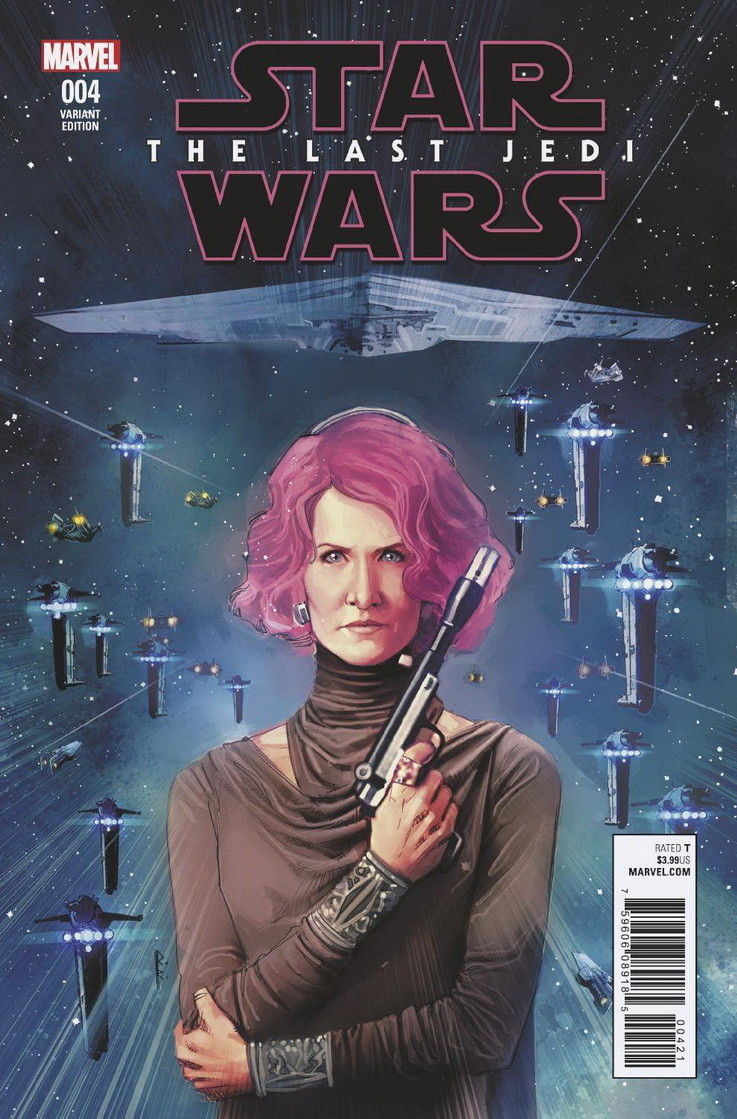 We can’t speak to the merit of The Last Jedi storyline, characters, and plot, because those adapting the material have no leeway in that regard. All we can speak to is the quality of the adaptation.

Rahzzah’s cover is a beautiful depiction of an integral scene between Luke and Yoda. Embedded in this scene is one of the strongest messages condensed to one Yoda-ism. Rahzzah’s chose to depict Luke and Yoda’s face, illuminated by the burning of the old ways. Soft lines with expert depth of color come together for a realistic and powerful cover scene.

Par for the adaptation course, the interior art is an immediate tonal change. Michael Walsh captures the essence of every character and scene without using many details. The simplistic depiction, stripping away all but necessary line work will bother some and will go unnoticed by others. Characters are recognizable, but inconsistent. In one panel Holdo’s high cheek bones are sharp and severe, the next rounded. A memorable example is probably General Leia’s flat-faced profile depiction. We know who this character is, but this is entirely inconsistent not only with how we know Carrie Fisher looks, but also inconsistent with previous scenes of Leia in the very same issue. Now, wait. Didn’t I just swoon over Yoda’s charming The Empire Strikes Back comic deviations from the film character? Yes, but the comics came out before the films in those days. The artists were working from concept drawings. We all now know what Carrie Fisher looks like and the comic adaptation is coming out 6 months after the film.

The few graphic details that exist are entirely abandoned as characters and settings are represented at a distance. Shortcuts have been taken with backgrounds. Walsh usually opts to let the colorist do the work, adding a gradient rather than real set dressing. When a set enters the panel, we end up with the simplest suggestion of where the action is supposed to be taking place. These problems are only highlighted in contrast when the time has been taken to get the details into the panel. This issue has two such scenes- Yoda’s first appearance in The Last Jedi, and Snoke’s final page spread. These two are not only a welcome change, but really impressive.

Gary Whitta’s writing doesn’t deviate much from mere adaptation. Can this really be faulted? That was the task that was set before the creative team on this book. One scene that notably deviates from strict adaptation is the burning of the Jedi Library. Whitta opted for narration set over the action. The narration is a bit forced, but also helps guide the reader through the action. From my point of view, the scene would have played more solemn without the narration. There is a catch-22, though. If the reader had not seen The Last Jedi, the narration would guide them through this scene and Luke’s thinking. However, who is this odious reader who hasn’t seen The Last Jedi? From what I’ve heard, Jason Fry’s novelization adds leagues of depth to the film experience (I haven’t read it yet). So why is this non-movie-viewing reader not reading that?

This issue isn’t a chore to read. However, as is normal with contemporary Star Wars comic adaptations, I am having a difficult time discerning the adaptations purpose. Cynics will say it’s so Disney can file trademarks under a different category. Optimists will say that different mediums add abstract depths to a story’s telling regardless of their form.

This being my third review for Fantha Tracks, readers may notice that I harp on the $3.99 admission price for a Marvel comic. That’s because a Marvel comic is about 22 pages and takes people between 15 to 20 minutes to read. For the price, you need to give the fans a reason to stick with the series. Over in the Thrawn adaptation, we see an artist’s renditions of scenes that, so far, we’ve only imagined while reading Zahn’s book. In the Rogue One adaptation there was a promise of small tidbits of information not included in the film. Here, I don’t see why a reader would spend $3.99 and opt to read this issue rather than just watch the DVD already sitting on their shelf. Collectors will buy it to add to our ever-growing, somewhat complete library of Marvel comics. However, I’ll probably pull this issue out to look at Rahzzah’s cover art and then go watch the film.