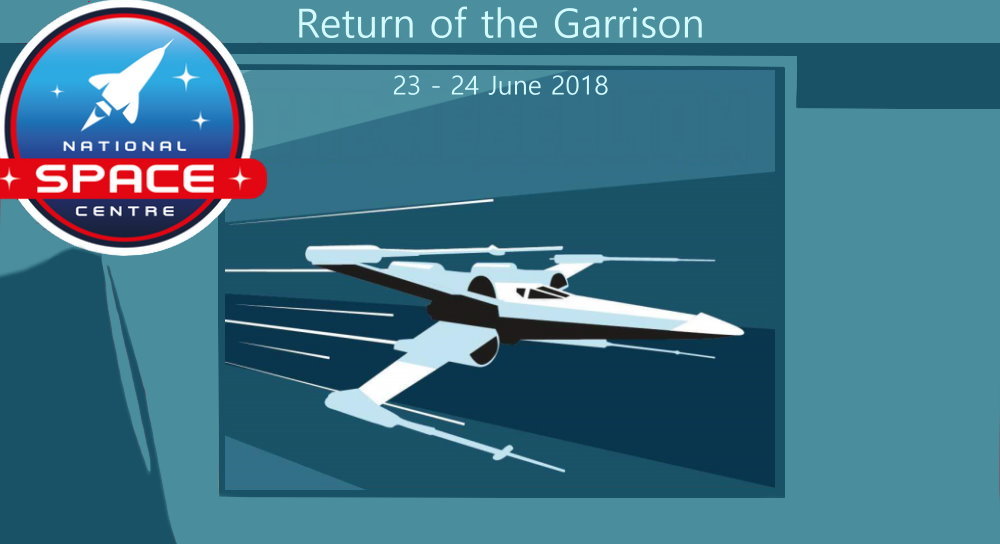 The weekend of Saturday 23rd – Sunday 24th June saw Return of the Garrison return to the National Space Centre on Exploration Drive in Leicester for the 13th year. Over the two days, Fantha Trackers Carl Bayliss, Clair Henry, Martin Keeler and Mark Newbold threw on the gold and silver shirts to cover the event, take photo’s, listen to talks and film video from the event. 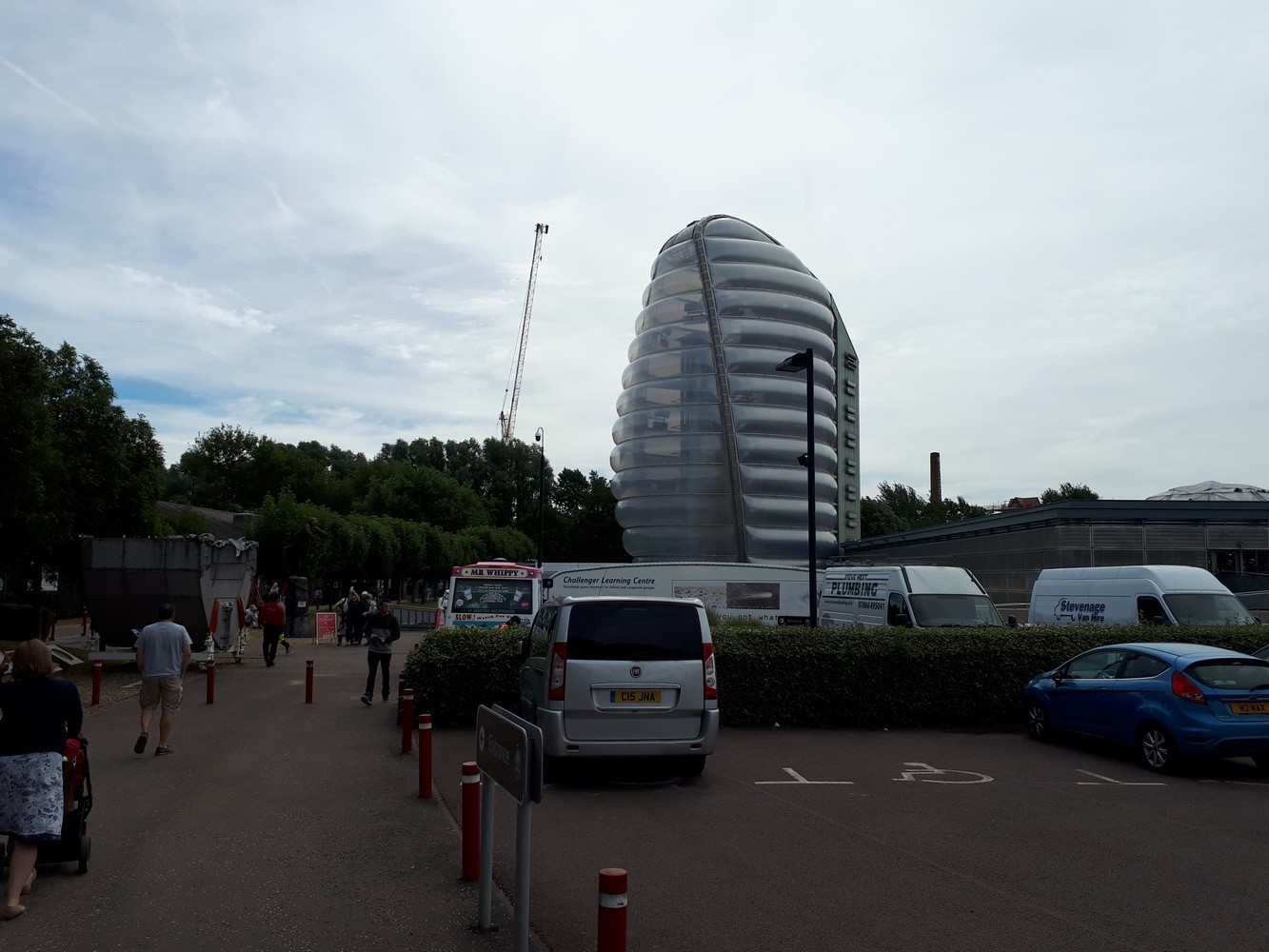 For me this was very much a return to the Return of The Garrison, having first visited the event several years ago with my daughter.

A wonderful charity-based event in the UK’s home of Space Exploration there are loads on interesting things to keep you busy for much longer than the day (so it’s handy that by attending you get an annual pass to the Space Centre to revisit and check out the things you enjoyed the first time again, or devolve into things you missed).

But of course, the main focus of the weekend was not the real life exploration of space, but the fantasy created over 40 years by George Lucas and its fandom.

The UK Garrison and Rebel Legion are now an integral part of Star Wars events the length and breadth of the country, backed up by the quote from one of the team there that they are now busier than ever and can have members attending everything from school fetes to themed corporate days, and can be at 10 or more events every weekend. When you add in that they are volunteers, many of whom have made their awesome costumes themselves this is all the more incredible and they deservedly gain a lot of (republic?) credit for the money they raise for good causes.

Having been to the event previously I was aware of what a great fun day out it is, and with that in mind set off to meet several of my fellow Fanthas on the Saturday. Due to a slight oversight on my part I was rather early in arriving, but that meant I was one of the first people through the doors come 10.00am. From Clair’s excellent Facebook live video, it certainly seems that in terms of guests and stall holders, Sunday had slightly more to offer the fans, but Saturday still made for an excellent day.

My first task was to scour the trader stalls for bargains and desirable items – and if I didn’t manage to snag the only two Zuvio figures for our own collector/obsessive, Martin! Also managed to pick up a couple of other 6” Black Series figures for some great prices and there were lots of great collectibles, from loose figures (from various eras) to some of the high end exclusives such as the Black Series Vader helmet. Also in attendance was a new artist to me, Craig Davison, whose art shows children reenacting scenes from Star Wars (and other franchises) with an echo of the actual characters in the background.

Also in attendance was our chum, Star Wars artist and author of How to Speak…. books, JAKe, who also hosted a panel for the fans talking about how to draw Star Wars characters. These panels are always good fun and once again JaKe was on form and kept the assembled audience entertained, all of them leaving with huge smiles.

The actors in attendance for the Saturday were Annabelle Davis and Julian Glover, and they were available for photos and autographs throughout the day, and also took part in a Q&A session with Malika from the National Space Centre (who is also a massive Star Wars and sci-fi fan). We got an insight into their experiences working on the films, and it was a great contrast between Julian, who as a working actor saw it as another week’s work, to Annabelle who has literally grown up heavily involved in the franchise through her father, Warwick.

Highlight of the day, apart from meeting up with my wonderful Fantha colleagues Mark and Martin, of course, was being able to show Julian one of the first 6” Black Series figures of General Veers to reach the UK, and he was truly amazed by the accuracy of the likeness. Head over to our Youtube channel to see the video of this world exclusive moment, it was really amazing to witness it first hand, and the video conveys this brilliantly.

That only really left the parade, where all of the UK Garrison and Rebel Legion members amassed to walk through the space centre before posing for large group pictures outside, in the glorious sunshine.

This is real showcase of both the dedication of the UK costume groups and the way that as fans we can show our love of the franchise whilst raising money for good causes – long may it continue. 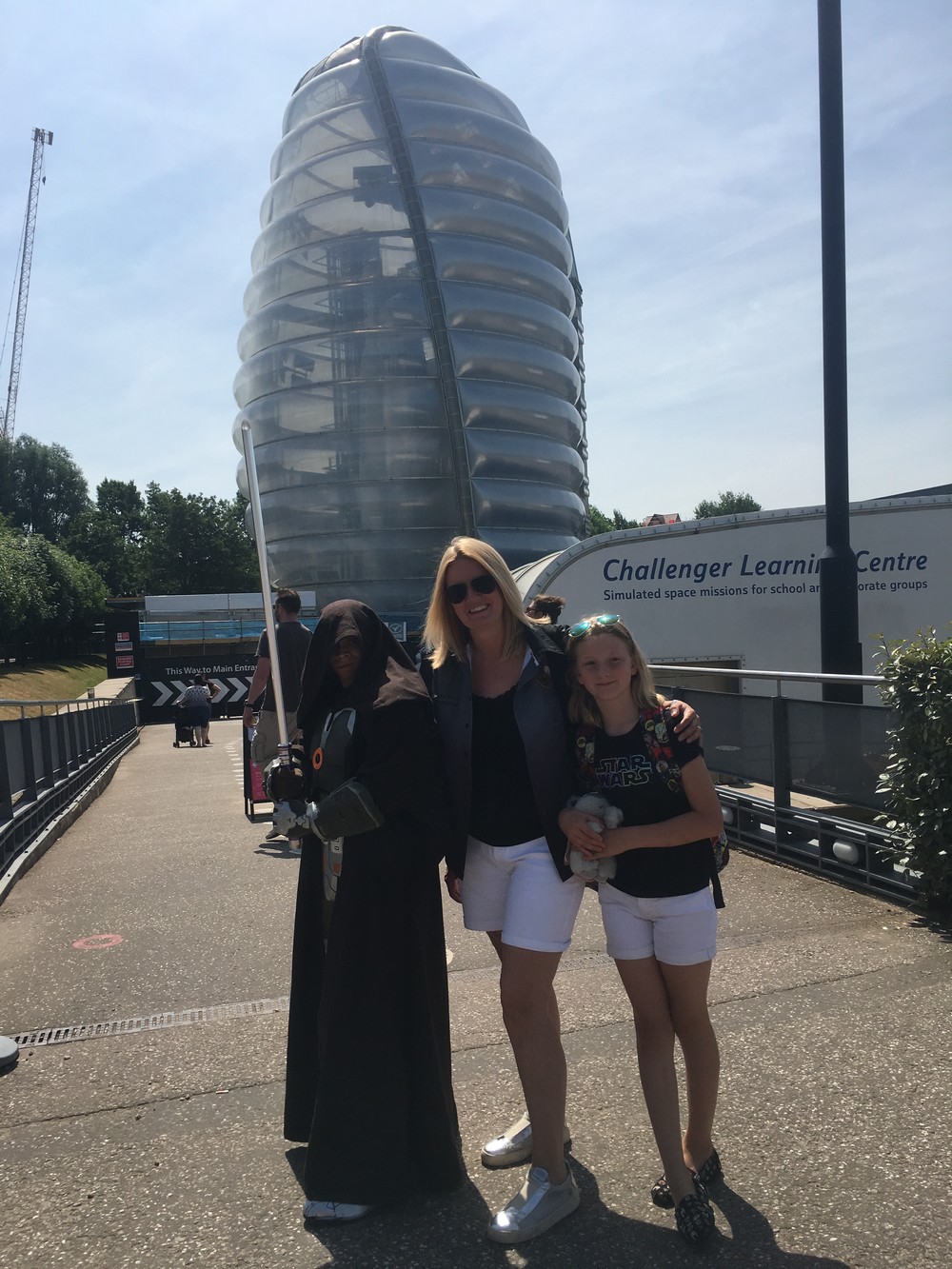 Well it’s another first for the family Henry!

I was always aware of The Return of the Garrison event at the National Space Centre in Leicestershire and it has always been on my radar as I live within 40 minutes of The National Space Centre. The diary was clear and I booked the tickets several months in advance (something I would be very pleased with when I arrived on the day!).

My daughter Sophie and I put on our favourite Star Wars gear and set off. From the minute we arrived I had a good feeling about this! It literally started in the main car park with the gentleman guiding the cars into the carpark who helped me work out the pay machine!

As we walked towards the main entrance I could hear music it was like a calling… Rey’s theme, then as we turned the corner the familiar beats of the Cantina band came and we were greeted by Greedo and pesky Jawas!

We had a lovely surprise as we put on our wristbands for the day because we had bought tickets over the internet we were given a voucher that entitled us to a year annual pass each at the Space Centre, this was great as we didn’t have the pressure of seeing everything in a day.

We entered the centre and we had walked onto an imperial ship there were so many UK Garrison walking around all of whom were happy to have their photos taken! We then turned the corner to see the propaganda posters and it felt like we were on a resistance ship with the Rebel Legion UK again all happy to have photos taken!

There was a small but good range of stalls you could purchase from Sophie’s favourite was the Hama bead christmas decoration stall, one of my favourites was a stall where I purchase the Funko Pop R2-D2 and Hologram Leia!

Sophie wanted a break so we headed up on the lift beside the Rocket to the Galactic Academy, there was a wide range of activities for children of all ages to complete! Sophie loves her colouring in and craft so we spent the next hour there while she coloured a few pictures and made a mask! The guys who ran this were so friendly and always checking to see if anything needed replenished and chat to the children about their creations. Sophie walked away with the obligatory sticker as well.

It was then my turn and we headed to the autograph area there were actors from a range of Star Wars movies , the thing I love about the smaller conventions is that when you wait for an autograph it’s usually not too long and they will always chat and share a few tales with you about their time on Star Wars.

We headed to Warwick and Annabelle Davis who were amazing! They were in great form trying to raise money for their charity Little People UK. Both chatted to Sophie and I about things and they both very graciously recorded a soundbite for our up and coming podcasts! Sophie bought one of Annabelle’s pins and 2 key rings which Warwick signed. We the had a look around the props that people had made, the 2 artists who were there and lastly a company who customise Vans and Converse (I’m not going to lie I was very tempted)

We headed to the planetarium for the Q&A session with all of the day’s signing artists, again some very funny anecdotes were shared with the audience. I even got to ask a quick fire question “Which Star Wars character would you like to have played that you didn’t?” Straight off Warwick Davis replied Han Solo! Unfortunately I forgot to ask which Han?? 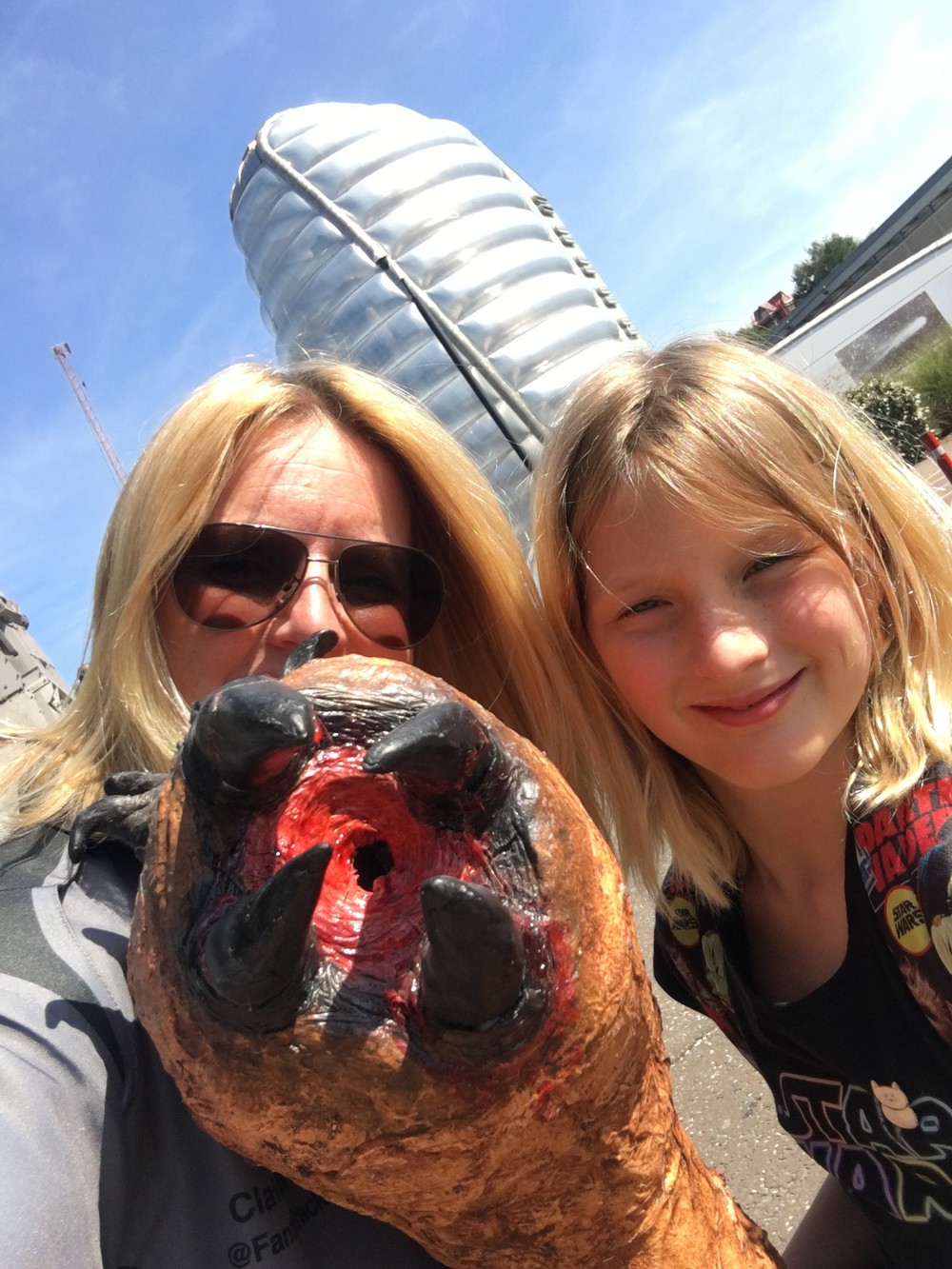 We left the Q&A session really refreshed and we went out to have another look around when low and behold what did we see? None other than Chewbacca

The day was drawing to a close and the final thing for Sophie and I to do was watch the final Parade of UK Garrison and the Rebel Legion UK. Some of the cosplayers were fantastic, a true labour of love.

The main thing that struck me throughout the day was what an amazing job the UK Garrison and The Rebel Legion UK do. We thoroughly enjoyed our day out if not a little exhausted by the end!