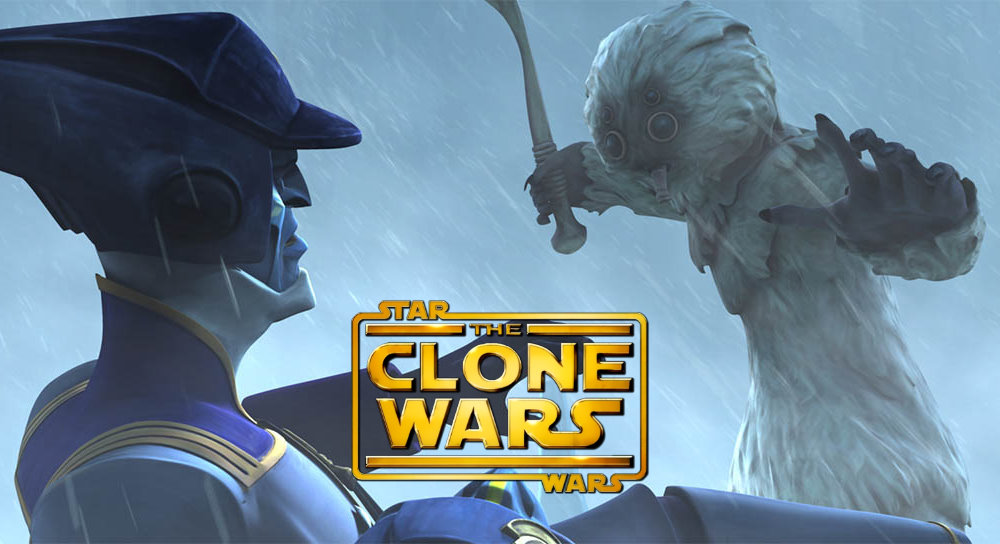 When The Clone Wars first aired back in late 2008, Lightsabre.co.uk guest reviewers looked at the show, giving their initial gut impressions on that groundbreaking first season – but not every review was completed, and so those reviews written at the time were never published. In an unpublished article written in 2008, James Floyd looks back at the fifteenth episode of season one – Trespass.

Republic outpost, overrun! The Jedi have lost all contact with the clone security force stationed on the bleak, snow-covered planet of Orto Plutonia. Obi-Wan Kenobi and Anakin Skywalker, accompanied by dignitaries from the nearby moon of Pantora are sent to investigate the disappearance of the clone troopers on the desolate and forbidding landscape…

In the episode ‘Trespass’, The Clone Wars dives into a sticky situation, showcasing that not everyone allied with the Republic is good. Obi-Wan, Anakin, and their clones see a taste of that, but also a chance for hope as they discover the reason a Republic outpost on a Pantoran-claimed world has gone silent.

With the fortune cookie of “Arrogance diminishes wisdom”, the exposition is set out – a clone outpost on the icy world of Orto Plutonia appears to have been wiped out, and the two Jedi bring the Chairman and Senator of Pantora to investigate, as well as C-3PO, R2-D2 and a company of snowclones. Because in a war, when a remote base gets wiped out, it’s always good to bring in the local politicians to fact-find. The arrogant Chairman Cho claims the uninhabited winter wonderland as Pantora’s. Rex and Obi-Wan discover that the Republic base has been wiped out, with trooper helmets on spears – not looking like a Separatist attack. A Separatist base is also discovered, with droid heads also on spears, and Anakin finds a giant footprint. Obi tells him to get the CSItroopers to make a cast, while they find a clue to where the attackers came from. Back at the Republic base, the young Senator Chuchi tries to piece together the attack with the hope of finding a peaceful solution with the attackers, but Cho reprimands her with a lecture on security and his willingness to die for his people.

Following the clues left by the wiped out battle droids, Anakin and Obi-wan reach a canyon village of indigenous Talz, responsible for the attacks on the Republic and Separatist outposts. Echoes of Nelvaan? The Talz take the Jedi into a hut and play Pictionary to communicate. Anakin gets the win by drawing the universal symbol of peace: a Talz holding hands with a smaller person. After hugs all around, the Jedi speed back to base to report that the planet is inhabited, and that they’ve given their word that there will be no retaliation. Chuchi hopes to give jurisdiction of the planet to the Senate, but Cho feels that Talz are not civilized and thus not bound by republic conventions, and orders an attack. The Jedi escort Cho and Chuchi to a rendezvous with the Talz chief Thi-Sen, and bring Threepio along. Despite Chuchi’s attempt to negotiate, Cho pushes the Pantorans, and their Republic allies into war against the Talz, even trying to order around the clones to follow him. Rex is ordered to protect Cho, while the Jedi and Chuchi try to phone the Pantoran government to get orders to override the Chairman. As the clones and Pantorans on speeders, they come under an ambush from the beast-riding Talz, who joust with the clones. In a move out of Westerns, Rex circles the speeders to fend off the spear-throwing natives. Never taking up arms himself, Cho watches one of his men get speared, and is rescued by another Pantoran soldier. With the situation getting grimmer, Rex orders a retreat, and after Cho gets skewered, Rex picks up the Chairman and flops him over the hood of his speeder and races off.

Back at the Republic outpost, Chuchi has gotten permission from the Pantoran government to override Cho and seek a peaceful solution, hoping to let the Jedi mediate diplomatically. Obi-wan sticks the work back to her, saying that that Talz war is with the Pantorans now. Rex and his surviving men are now caught on the top of a cliff in front of a horde of mounted Talz. Going into a final stand, the clones are saved when the Jedi and reinforcements arrive via gunship. Chuchi takes command from the dying Cho, who seeks his death to be avenged, but after he expires, the senator takes his hat, and walks into the no man’s land with Threepio. Sticking Cho’s hat on a spear, she brokers a dramatic peace with Thi-Sen, leaving the planet to the sovereign Talz. The Talz all bow at the ceasefire, and Obi-wan tells Chuchi to make sure the peace lasts, and let it serve as an example, as they fly off the icy rock. The Pantora’s box has been opened, and all that is left is hope.

The episode was solid overall. When it first aired, I was concerned that Talz continuity had taken a big jump, compared to Muftak’s racial memories in the “Tales from the Mos Eisley Cantina”, but apparently he’s the oddball. I’m still wondering what the Talz eat on an ice world with those tiny proboscii of theirs. The clones’ snow gear was based off of early McQuarrie artwork for the snowtroopers on Hoth, which in turn was based on Nazi cold-weather uniforms, giving an eerie reminder of who the clones end up serving. Like most of The Clone Wars stories, setting up the situation sometimes requires a little leap of faith: if a remote outpost disappeared, would they really send two of the top Jedi generals to investigate, and would they really bring the Chairman and Senator of the local system into a potential war zone. Threepio is also brought along to a supposedly uninhabited world and apparently can walk in snow fine and can swap between working for Padme and Anakin. Oddly enough, the Talz of Orto Plutonia are similar to the Tuskens on Tatooine, but apparently Anakin doesn’t make the connection, even though they slaughtered a company of clones. Trespass is like the modern-day Western that satisfy the need for battle scenes but give a humanizing respect to the natives, and demonize the arrogance found in some of the civilized folk.