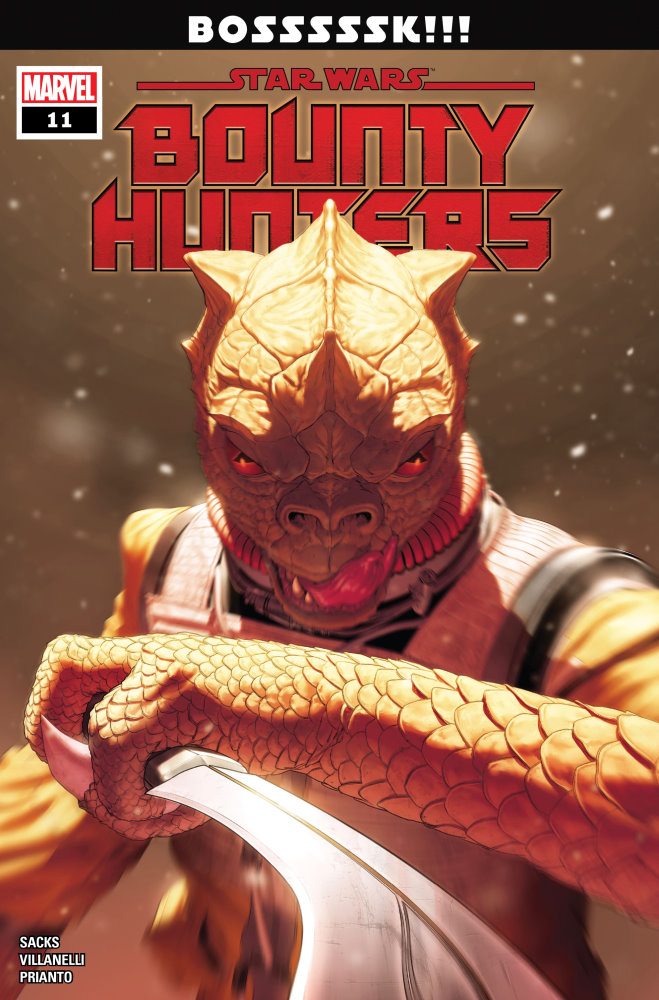 THE GREAT HUNT OF MALASTARE

Valance now tears through space in a stolen vessel, desperate to pick up Fett’s trail….

If there were ever a bounty hunter to give a wide berth, surely it’s Bossk. While his bounty hunting skills may appear secondary to Boba Fett, the Mandalorian isn’t known for eating his quarry or tearing them apart with his bare claws, and the 11th issue of Bounty Hunters shows this feral fighting style to great effect as the Trandoshan hunter tears, rips, stabs and attacks like a lizard nightmare.

Opening the issue, we’re catching the tail end of a heated conversation between Dengar and Valance. The bandaged bounty hunter is at a distinct disadvantage. Handcuffed and at the mercy of Beilert, he is knocked around as the cyborg hunter makes clear who he is hunting; Han Solo, who of course has in his posession Han Solo and Dengar agrees as a receipt is paid and a temporary team formed. It’s here we head to Malastare as we join a hunt as a Gran prepares to take down a prey before a leaping Bossk himself takes out the Gran. We’re watching a hunt organised by the Malastare Hunting Club as Bossk makes sure to identify himself as the alpha of the group. The Hunting Club, organised for the pleasure of the wealthy and influential, welcomes a high ranking member of the Banking Clan Exum Jermit, himself courted by Bib Fortuna who is there in person to ask that he choose Jabba the Hutt as his business partner. Jermit refuses, claiming to stay loyal to his client.

The hunt is very much the focal point of the issue as we watch Bossk tear through his opponents and use his temporary ‘allies’ as canon fodder to better his own tactical position. We see Malastare native Dugs and Grans go down hard to Bossk, and even a hard-hitting fight between Bossk and Grummgar, the hulking Dowutin who is temporarily blinded by Bossks claws as he knocks Grummgar out with a boulder. As the issue nears its end we see the prime error of judgement in the story revealed as Jermit – believing his safety is protected by the Empire – learn that Jabba’s hunter on the ground is Bossk, who ends the bewildered Muun off-panel. We round out the issue as Bossk learns of his next challenge and we return to Dengar and Valance who thanks to a tip off learn where Slave 1 and Boba Fett are.

As usual, Bounty Hunters ends at the perfect place, teeing up the following issue with aplomb. The art from Paulo Villanelli is sharp as ever, the lush colours of Arif Prianto easy on the eyes and the script of Ethan Sacks a thrilling, exciting and illuminating ride. Being on Malastare is evocative of Episode 1: Racer, a welcome nod to days past and the era we first met Dugs and Grans, and the table is set for a Bossk, Fett, Dengar, Valance clash, ansd who doesn’t want to see how that works out?