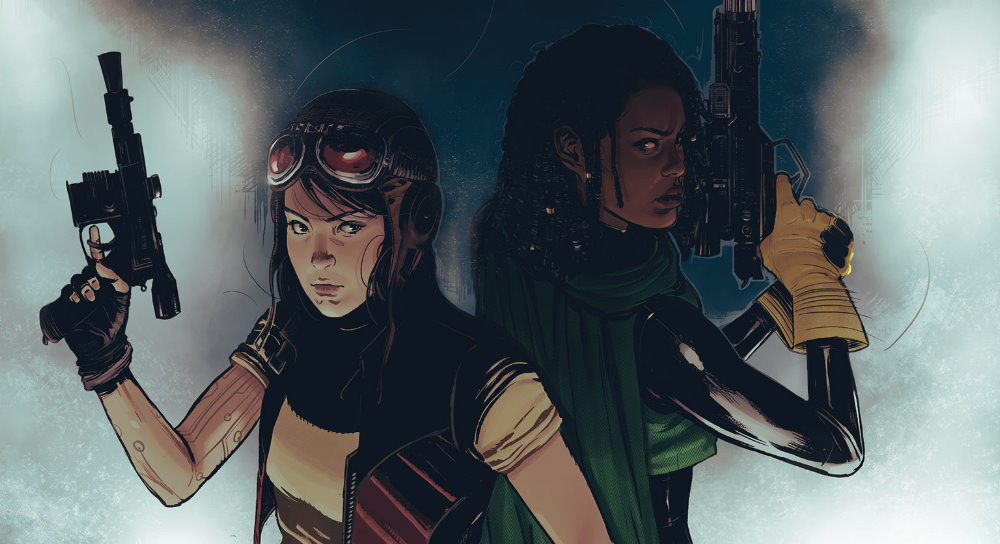 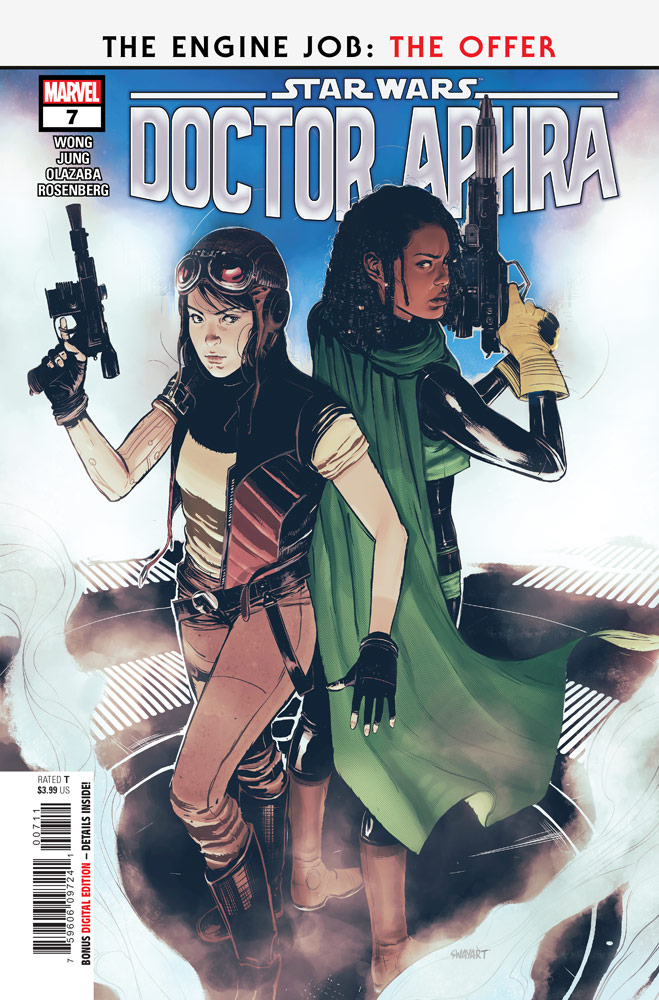 FORTUNE AND FATE part 2 THE OFFER

After narrowly escaping Darth Vader and doing a huge solid for the Rebellion, Doctor Aphra’s cut all ties to her past and is trying to go back to what she does best: hunting down the most valuable treasure in the galaxy.

But the rogue archaeologist is also exceedingly good at making enemies. Domina Tagge, the incredibly powerful head of the Tagge Corporation, hired an army of bounty hunters to bring Aphra in.

Now Aphra’s working for Domina. The job: steal experimental hyperdrive technology from Domina’s rival. To get it done, Aphra’s going to need help…

The previous issue of Doctor Aphra saw Chelli first fleeing from a stream of bounty hunters who were looking to cash in on the credits for her capture by the head of the Tagge Corpation – Domina Tagge. This led to Chelli agreeing to go on a quest for Lady Tagge to steal a experimental Nihil Hyperdrive from Domina’s main rivial. The caveat was that Aphra was going to need to enlist the help of her ex-girlfriend (and ex-wife of Han Solo) Sana Starros. This leads to the second part of the Engine Job, opening up on the backstreets of Corellia with good ol’ Chelli making herself at home in her ex-flame’s crash pad. As you’d expect, Starros was not best pleased to see her!

It’s been about two years since Starros and Aphra narrowly escaped being flattened on Accresker Jail (checkout Doctor Aphra’s Vol. 1: The Castrophe Con) and for Sana at least, she was able to move on from their past relationship and not keep a flame of simmering rage and hatred lit for the rogue archaeologist. Both Aphra and Sana have been developed and expanded upon since their early adventures, and where Sana has ended up working more closely with the Rebellion, Aphra herself isn’t without her own growth; however, she still out for herself.

We’ve listened (or read) more of Aphra’s and Sana’s relationship in the Dr Aphra audio book which covered their early relationship, so it’s nice to see them get back to better place.

The conversation was more cordial than we’d expect which helps to show how Sana has moved on, but still Aphra finds herself tossed out on her ear (quite literally) and only the sweet lure of Corellia’s answer to Krispy Kreme doughnuts seems to sway Sana….or was it that Aphra sat at Sana’s door all night?

Aphra is looking for an introduction to the head of White Worms and Han Solo’s ex-boss Lady Proxima, and I was really pleased and surprised to see Proxima again beyond a quick mention. I think the last time would have been during the events of Solo: A Star Wars Story or the Han Solo: Imperial Cadet. I was always liked both the character and creature design for Proxima and felt that there was always scope for more inclusion in other stories besides Solo and Rae Carson’s Most Wanted.

That being said you don’t get the impression Proxima has much reach outside of Corellia or even Coronet city at least, nowhere near the scale of Jabba the Hutt. This in itself is nice, as we’re currently in a time where the galaxy is seemingly overrun by massive criminal syndicates. It is also good to see Proxima has had the windows repaired!

As it stands Aphra is no stranger to Lady Proxima, so it’s no surprise that Proxima was less than happy to see Aphra. Chelli Aphra pretty much seems to know everyone in the criminal underworld, in every corner of the galaxy….and has pretty much annoyed, cheated to or lied to the majority of them, so it wasn’t so much an introduction to Proxima from Sana but merely a way in, and once in Aphra bribes Proxima with a rare bracelet to get information on the location of the engine. As it turns out it was smuggled through Correllia by a Sullestian by the name of Remy who Sana had just been working with.

Proxima provides the location of Remy and Chelli and Sana arrive to find that Remy has already been captured. Remy was tracked down by General Vukorah of the Unbroken Clan criminal syndicate, so if you have been reading Ethan Sack’s Bounty Hunters the Unbroken Clan will be familiar to you and a link to another entry in the Star Wars comic line.

Remy pays the price with his life and Vukorah takes the datapad with information regarding who Remy passed the Nihil engine to, but luckily Aphra has a few more of those rare bracelets she used to bribe Lady Proxima with, and as it turns out those bracelets are detonite rings which she rolls towards the Clan members and in turn blowsup their speeder, allowing Aphra and Sana to recover Remy’s datapad. Let’s hope Lady Proxima doesn’t look too closely at her ‘gift’ from Aphra.

Aphra and Sana escape in front of a barrage of blaster bolts and head off planet to go hunt down the Nihil engine.

Intercutting with, but at this point totally separate to, is Just Lucky’s story. He’s been cut loose from the Tagge’s but still needs to earn credits to cover his brothers gambling debts. The problem is that his brother is still gambling and we find him at the slot machines in Canto Bight. Rather than go and try and take down the people his brother owes money to, he offers to work it off which is an interesting story point for Alyssa Wong to take. It shows not only that Just Lucky isn’t motivated by money but by family, and trying to do right by his younger brother. So, whilst he double crossed Aphra in the previous arc, it makes him sympathetic. How this ties into Aphra’s current caper we’ll see, but I think it means that we have a character who’s yet to met his full potential in the story.

This issue saw Minkyu Jung replace Ray-Anthony Height on pencils. Jung has a different style but still is able to offer some subtle expressions. The issue felt a bit darker than the previous episode which worked really well in Proxima’s audience chamber and the blue and red palate we saw in Solo: ASWS is maintained here. Other areas of Corilla have a sickly green palate which gives a dank, lower levels feel. It’s a far cry from the gleaming crisp glamour of Canto Bite or the Tagge’s headquarters.

I really enjoyed reading this story, the interplay between Aphra and Sana felt realistic and legitimate, theres an ease to their conversation which is only from their time together and I reinforces the point that its hard to say no to Aphra even for a small favour. I also liked have Just Lucky get his own story at this point, I think he has the potential to be a really likeable character and also Sana too, when she was first introduced I wasn’t hugely keen on her but she has grown on me over the past few years and its great to see her back running around with Dr Aphra.

This issue felt like the crossover to past and present Star Wars, and hit a really good balance with the inclusion of Lady Proxima, the Unbroken Clan and of course the Nihil Mcguffin. It entices the reader to want to keep up with all the differing storylines, which when you have such a fine array of writers working across the entire franchise, is hard to ignore.