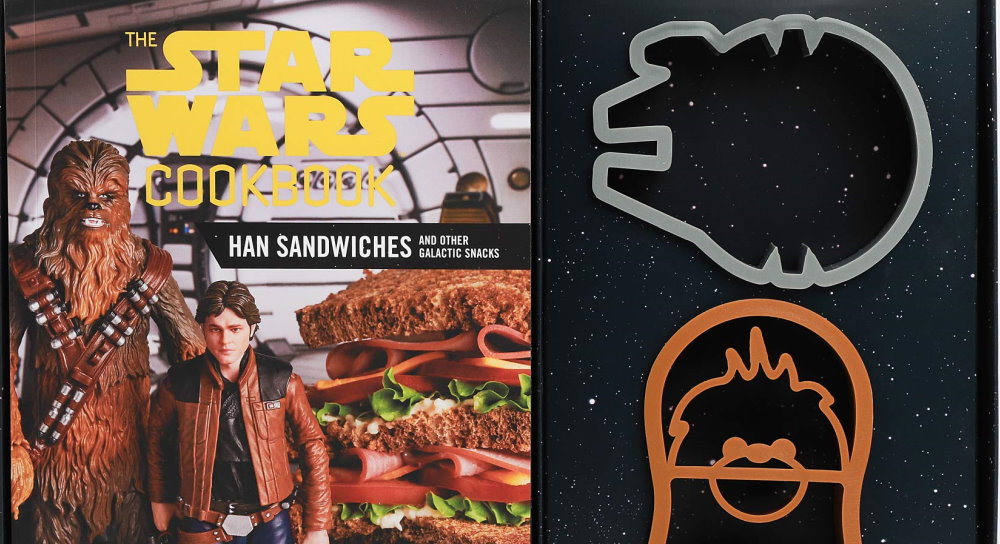 Take your sandwich game to the next level with Star Wars–shaped sandwich cutters! From sandwiches to sides and desserts, these easy-to-make, irresistible recipes feature iconic scenes from across the saga. Photographs featuring Star Wars figurines re-creating epic moments from the films provide an extra helping of humor. 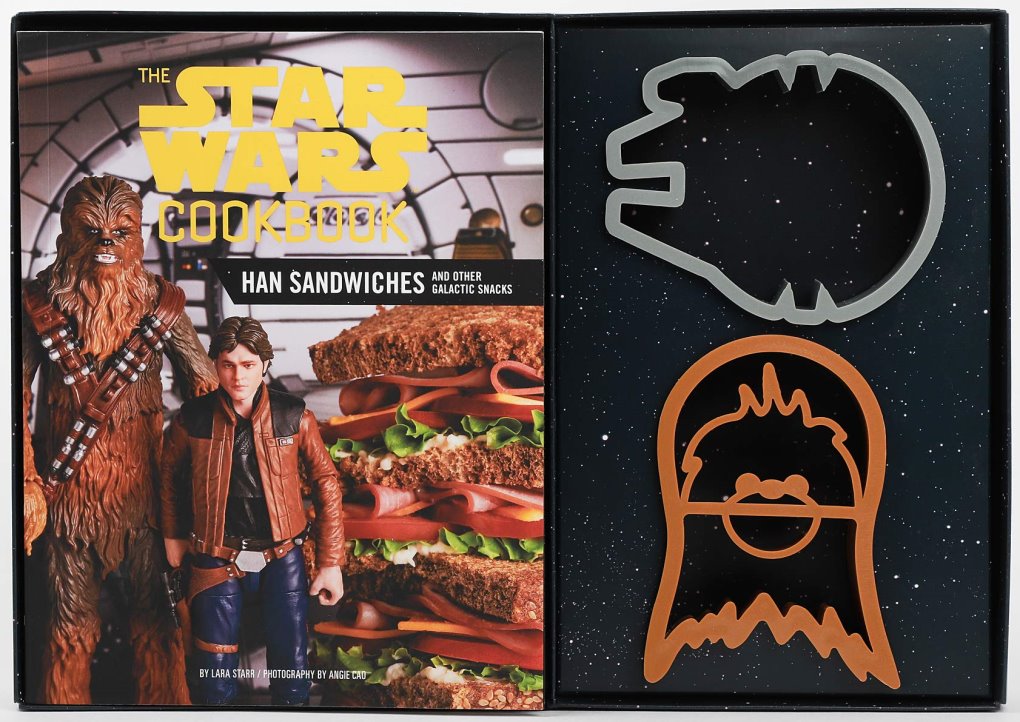 “Take charge of the culinary controls and make delicious breakfasts, lunches, dinners, snacks, and desserts–all inspired by…sandwiches!” The cookbook, packaged in a box next to plastic Millennium Falcon and Chewbacca sandwich cutters, opens with this statement, and certainly you will discover some incredible smells making these sweet and savory treats inspired by our favorite scoundrel and Wookiee. The recipes are fairly typical foods given clever Star Wars names with reference to the original trilogy, sequels, and the stand-alone film but only take on Star Wars shapes if you choose to use the provided cutters. Most of the recipes are next well-photographed Star Wars scenes perfectly staged with action figures.

Since young Han and Chewie are on the cover, the recipes feature irresistible names inspired by Han Solo scenes. Some of my favorites are:

Have no delusions of grandeur; the recipes range from simple, no-cook projects for little ones, like Falcon-shaped peanut butter sandwiches to a bit more involved ones for older kids, like the Cloud City Cookies — Falcon shaped cookies dipped in white chocolate — yum!  There is nothing too complicated or fancy, so this is also a great resource for an food-preparation-inept adults, like me.

The recipes are easy to follow (with the grams equivalent for cups in parentheticals), but young kids will need an adult for the cutting, handling of raw meats, and the use of a mixer and food processor. Some of the recipes provide alternatives for aspiring chefs and eaters with food sensitivities and allergies. 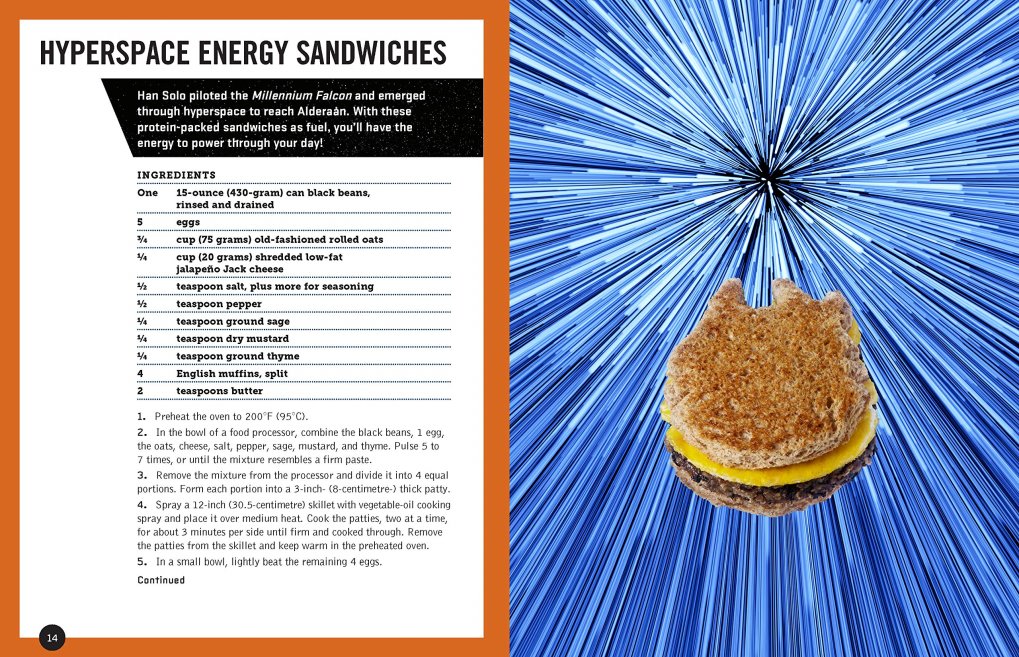 A few of recipes have no accompanying image, which I feel is a missed opportunity and not the best choice for the target audience. For instance, “Punch It!” Pudding is another of the great named foods, but there is no image to accompany this bread pudding recipe, which is unfortunate because the instructions call for the use of the cutters on the bread. There are a few recipes with images that feature the use of the Millennium Falcon cutter, but none feature the Chewbacca cutter.

I had a special consultant from the target audience, my housemate’s 6-year-old daughter, who wanted to know why there weren’t pictures for each recipe, and she said that she would just skip those recipes without pictures since she didn’t know what she’d be making. Trying to read the recipe wasn’t always easy for her and wasn’t giving her a good visual.

My consultant also wondered why there was a Chewbacca cutter if it wasn’t shown as being used in any of the recipe pictures, but she figured it could still be used to make sandwiches and cookies and delighted in thinking it was a bonus item to go along with the book. Overall, for her, it was a book of fun-looking Star Wars projects.

Curiously there is a recipe, complete with image, for Bantha Buns, which has nothing to do with Han Solo (Right? Or am I getting so old that despite thousands of viewings, I’ve forgotten the connection between Han and the Banthas? Apologies if I’ve made an error). They could have left this one out and dedicated resources to adding images to other recipes.

The color cover features the Chewbacca and Han Solo action figures from the film Solo (I am impressed by how much the action figure looks like the actor Alden Ehrenreich).  Next to these BFFs is a well-stacked, fresh, tasty-looking giant sandwich and the background implies that they are inside the Millennium Falcon; it is the image that also accompanies the recipe for this sandwich called the “Ham Solo.” 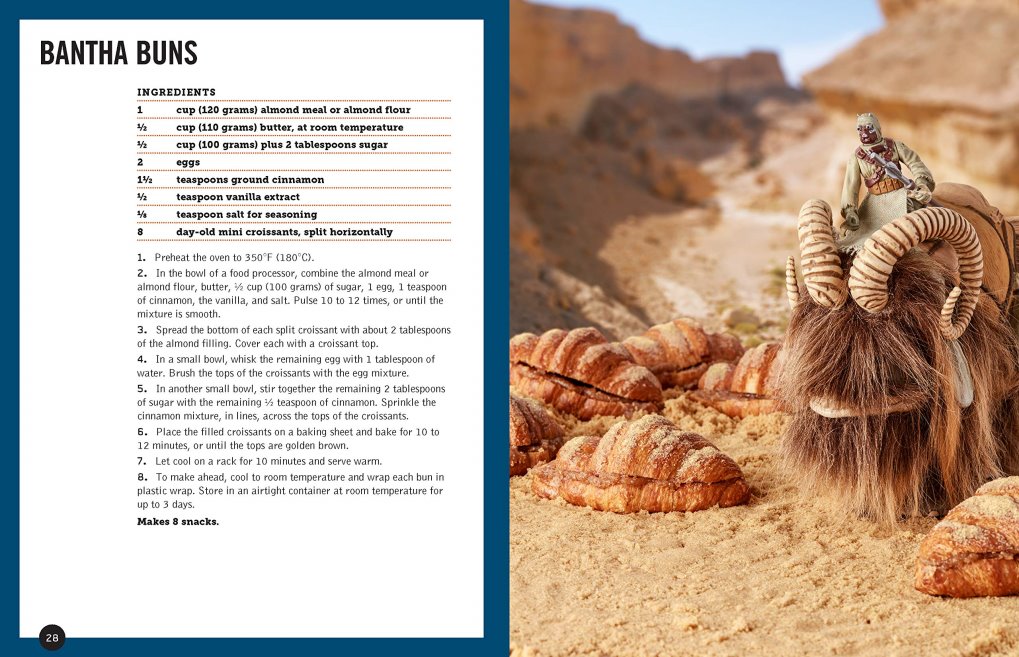 The Introduction and its comprehensive safety information use fun language and space-flight terminology like “Blast your next sandwich into hyperspace!” and “The kitchen is a cockpit and you’re the pilot!” Star Wars gems worked in like this: “Be sure to get your parents or other grown-ups involved. Seek the wisdom of their cooking experience. That’s right: Don’t get cocky, kid.” It also provides a list of all the equipment you’ll need and how to care for your cutters.

The images and cutters are enough for me to want to have this book as an addition to my collection of Star Wars cookbooks, but I would, one day, also like to see a cookbook on how to make foods that are more reflected of Star Wars like they have at Disneyland: lightsaber churros, which are read or blue, depending on your light side or dark side inclination, and come with a cardboard hilt, or the sourdough loaf shaped like Darth Vader’s helmet.

Of course those recipes would be more complex than these recipes in a cookbook intended for children. And there would need to be a large enough market for a Star Wars cookbook with more complex recipes for the publishers to make a buck because they ain’t in it for our revolution; they expect to be well-paid.

With thanks to Chronicle Books for the free review copy.

Women of the Galaxy notebooks coming from Chronicle

Book Review: The Star Wars Cookbook: BB-Ate: Awaken To The Force Of Breakfast And Brunch