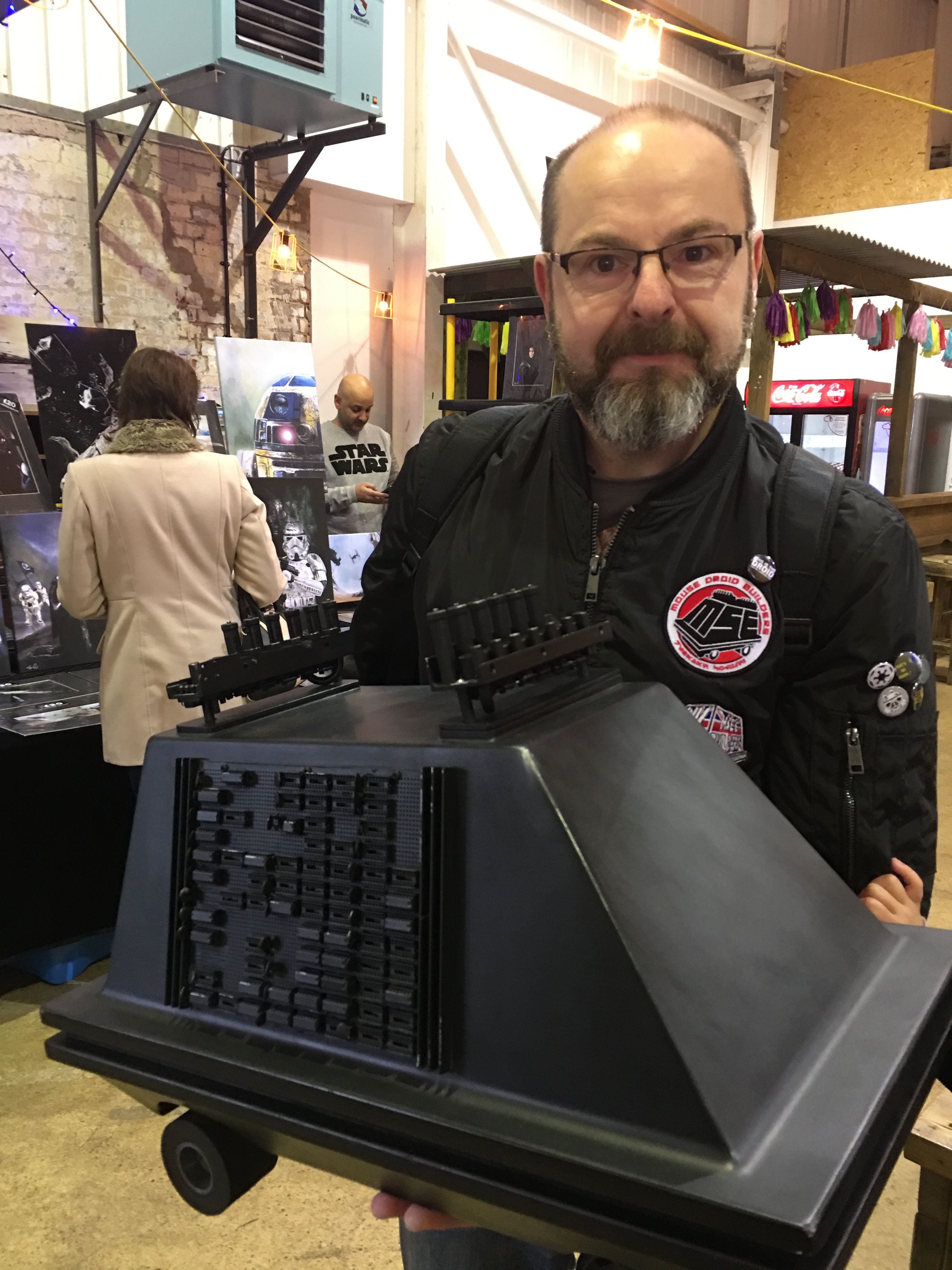 Our series of interviews “From different points of view” highlights Star Wars fans from across the world and allows them to tell you about Star Wars fandom from their point of view and how it has influenced their lives and the direction it has taken them and this week we remain in the Midlands in England for this point of view!

Roger our resident droid builder can be seen at conventions across the U.K with a trusty companion and is a member of a certain droid builders club….

Roger when did your love of Star Wars begin and how has it influenced you?

My father took me and my sister to the Plaza cinema in Bangor North Wales to watch Star Wars, A New Hope around the time of it’s release and I remember the cinema being very busy.I was eleven at the time and totally focussed on the futuristic fairytale being told on the big screen. The film left me wanting more and I couldn’t wait to be in school the following day to talk to my friends about it.All the usual toys and comics followed but sadly they are all long gone, they were played with lost, broken or destroyed by the Empire! I still have an old 3PO figure that stands on a shelf with R2D2 (He’s an empty bubble bath) though I can’t remember where he’s from but he is old and tatty.

A few years later saw us back at the cinema for Empire Strikes Back.

There were so many questions again when we left the cinema.I loved the asteroid field in Empire and John Williams score for this scene still makes my hair stand on end today.

A few years again and it was Return of the Jedi, the scene with the speeder bikes through the forest on Endor being the most memorable.

Something I do love from first three films is the soundtracks, John Williams is the best. In the late eighties and early nineties I studied Fashion and textile design at Liverpool Polytechnic, my graduation catwalk show was based around a space science fiction theme and the menswear range I produced was displayed on a stand for the final degree show, recordings from the Star Wars films were played in the background to add atmosphere and I still have those old cassette recordings.

A New Hope has always been a go to movie when I got in late from the pub or just wanted a couple of hours to myself. Like me, my daughter loves all the Star Wars movies and the animated Clone Wars and Rebels series, we spend so much time watching those. Now that she’s old enough we have started to visit a few comic cons and totally geek out together, she gets to dress up and I get to bring my droid.

This love of Star Wars also led you to begin a project that now joins you at conventions across the midlands can you explain what this project is and why you decided to embark on this project?

Having a young daughter who loves Star Wars means we get to share lots of geeky experiences and it was whilst we were at the Star Wars Celebration in London 2016 that we spent some time looking at the R2D2 builders club display, we noticed there was a lack of a C1-10P, we are both ‘Rebels’ fans and my daughter commented on the fact that they didn’t have a ‘Chopper’ on display. This is where my interest in owning and building a droid of some kind started, but which one? As a fan of the Rebels series I fancied building something different like a C1 but after reading the information available on Astromech.net I realised it was going to be a huge task.

The scene from A New Hopewhere Chewbacca scares off a mouse droid is a memorable scene so I started researching on the mouse droid builders club website and set my sights on something a little more manageable for my first build, the MSE-6 Mouse Droid.

My mouse took the best part of a year to reach the stage it’s at now and there’s still some tinkering to be done but I’m very pleased with the results and the reactions I’ve had to it.

It’s those reactions my MSE has from kids and adults alike that has made the whole build worthwhile. How did the mouse droid club support you throughout the build?

The amount of information available on the mouse droid builders Yahoo page was a great starting point and from this I drew up full size plans to base my build on, all the information I needed was there at the click of a mouse!

Then when I was ready to start my build I started a build log on rebeldroids.net

You can see the first version of my mouse on here where I went down the ‘Rebels’ route and put lights on the top of the mouse. I was happy with this but came across some 3D printed top greeblies which I had to get to make the mouse what it is today. 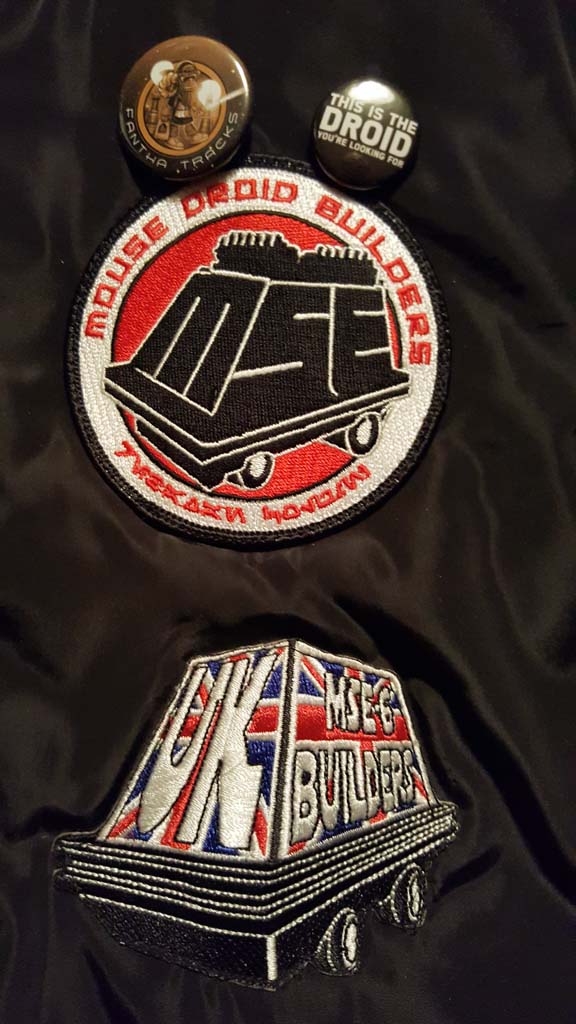 Now that your mouse droid is complete are you finished or have you another project in the pipeline?

There are always things to tinker with on the mouse mostly battle scars from con visits, it was suggested to get it 501st approved so I dare say there will be a little work to do to achieve this.

And yes there is another project and it has already begun and it’s C1-10P ‘Chopper’.

We are delighted that you are allowing Fantha Tracks to follow your progress, while you build your new droid and we can’t wait to share it with everyone! What are the major stages in building a droid of this scale?

During the time I was building my mouse droid I was also researching the ways of building a droid like chopper, there are a few C1 build logs out there to follow but each is a little different. Planning is the biggest stage and I drew up a full scale plan over a year ago whilst still building the mouse. Having the materials to start a droid build of this size took a while to source and is an ongoing process I started with what I consider was the trickiest part, the drive system. Because the drive units have to be a matching pair it took a couple of attempts and I wasn’t really following a plan for this part, It was more of a collection of ideas off the web and a bit of re-designing whilst building but they have worked out okay. My C1’s foundation is wood and it’s a material I’m very comfortable walking with it.

So far I have the drive units assembled, the legs are in their early stages and I have a skeletal frame for the main part of the body. I like to do things as economical as possible so alternative materials are good finds. The circles for the C1’s body were from wooden cable drums that just happened to be the correct diameter. The outside of the body will be covered in a plastic skin.

When do you hope to complete it?

I have no planned finishing date but as soon as it’s recognisable and drives it’ll make it first debut at a con near home.