Welcome to the fifth in a series of recollections from Fantha Tracks regular contributor Paul Naylor. In this memoir, Paul recounts the trials and tribulations of collecting autographs of our favourite heroes and villains.

Love it or loath it, for all its patchiness 1999’s The Phantom Menace did do something right. It introduced us to a new Darth. Darth Maul to be precise.

Instantly recognisable as a villain, the distinctive red and black patterning of Maul’s face, poor dental hygiene and crowning glory of horns brought a devilish incarnation to the Star Wars galaxy.

He may have little to say in the movie, but any bad guy that can survive being halved by a lightsaber and make a comeback in two animated series must be well-loved by fans globally.

These days I run my own business, creating books and magazines – for the business world and high end chefs mostly – but for 25 years I worked in local press.

In the latter part of my career I was Supplements Editor for two newspapers in the UK’s West Midlands. One of the perks of the job was press trips. I was fortunate enough to travel the world, reviewing fabulous destinations. Other trips were closer to home. 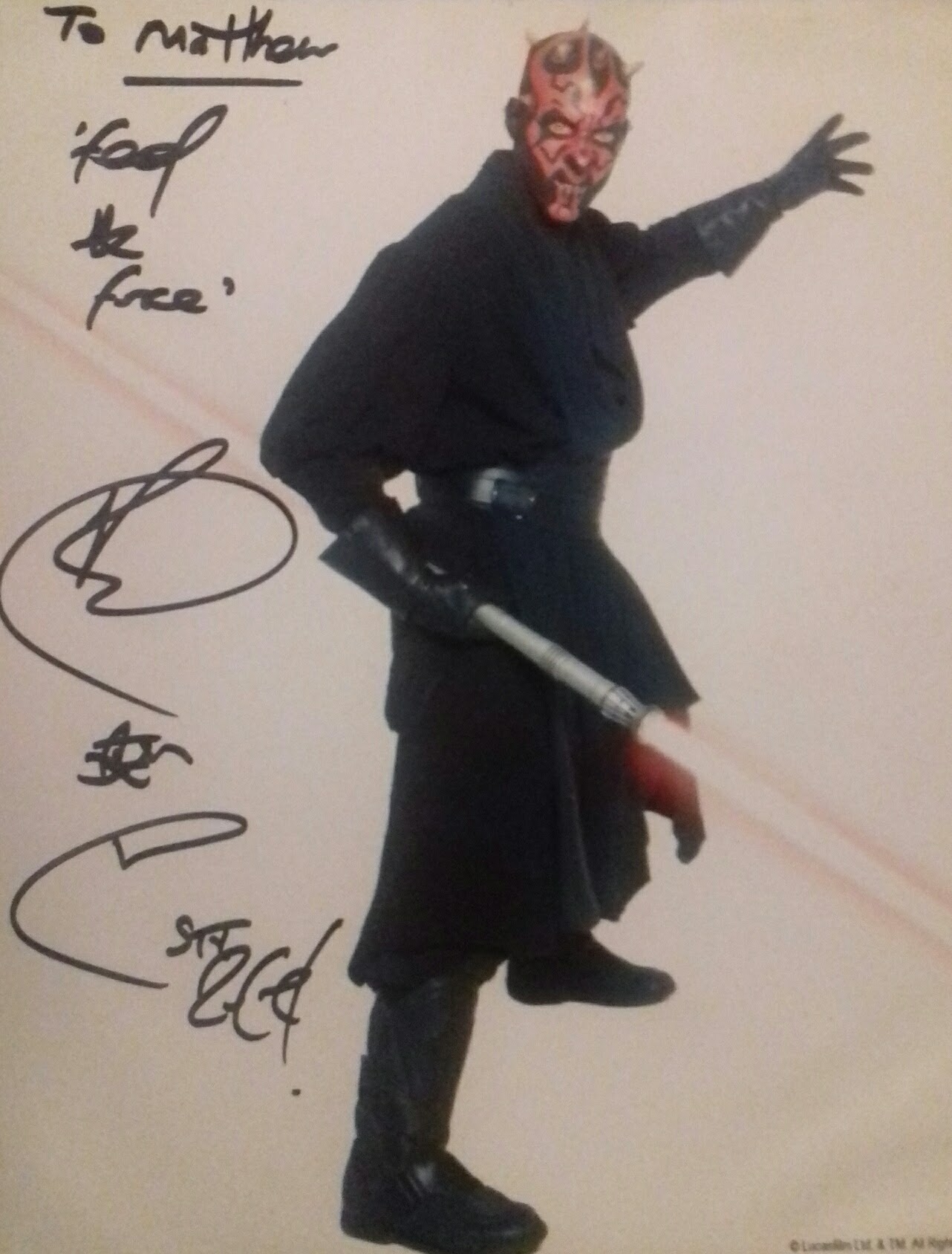 Knowing that Ray Park – aka Darth Maul – was to be making a rare appearance in Cardiff at a forthcoming Comic Con, I jumped at the chance when a press trip to the capital of Wales was offered to me.

I managed to line up the dates and my co-pilot for a ‘lads weekend away’ would be my son, Matthew who was almost 12 at the time.

An itinerary of sorts was thrown our way, including a visit to the brilliant castle and the now defunct Doctor Who Experience (shame that) – but our priority was to meet Ray.

It was a good Comic Con, and I have to say the lines to meet Ray were clearly the longest. Eventually we got to meet Mr Maul.

What a great chap. We had a good old chat and I even told him how I had managed to wangle a press trip – essentially just to meet him.

Matthew and I both had autographed pictures from Ray and I took a quick snap of my son and Mr Park together. 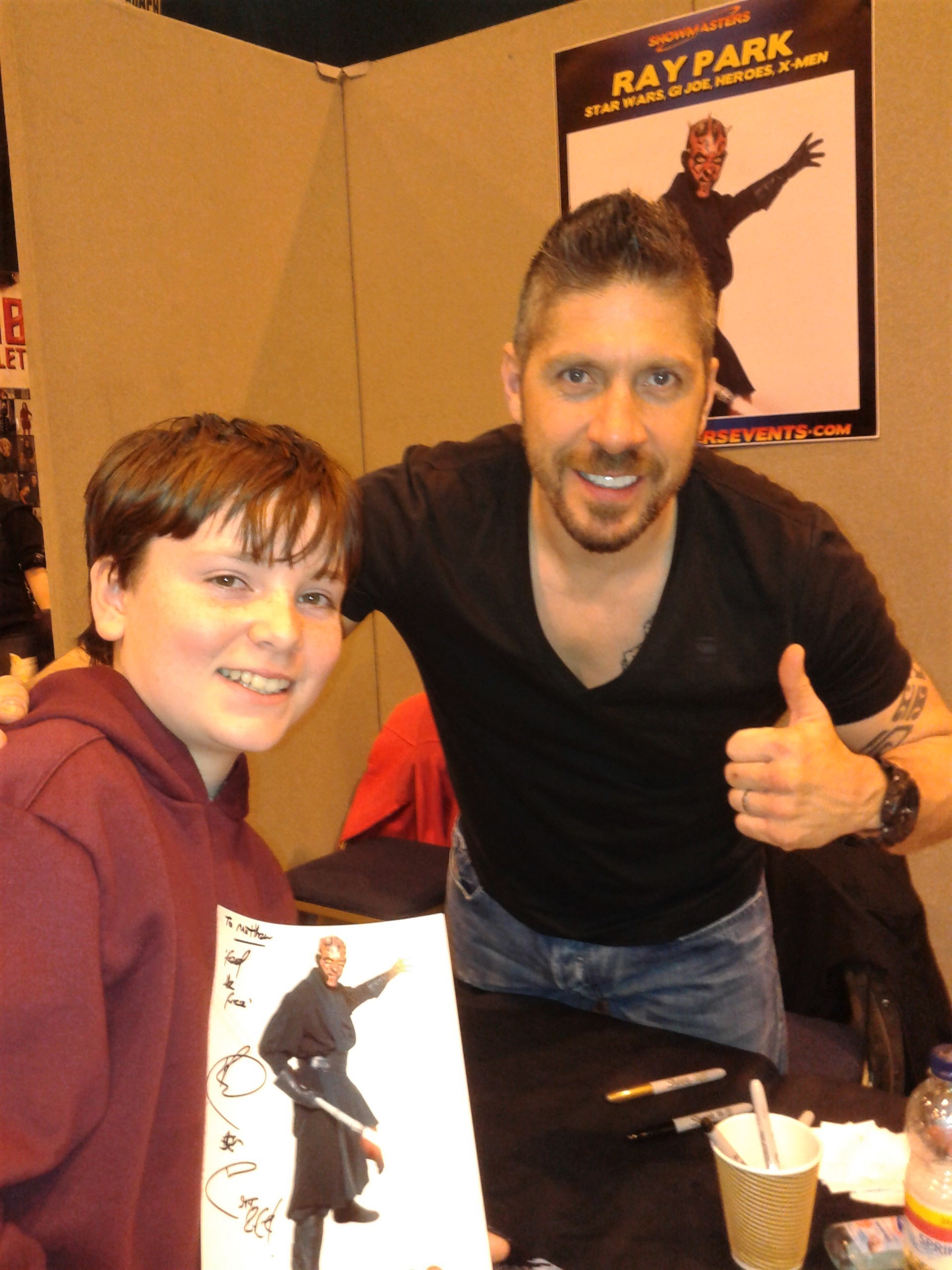 Roll on a few years and I had somehow managed to get reporting rights for local press at Star Wars Celebration Europe. Result!!! More on that in future articles.

The 2016 event was amazing. Real sensory overload, but a joy to behold. I was walking through the thoroughfare behind the Star Wars Show main stage as Ray Park was finishing his interview. As he was escorted through the throng of fans I managed to grab a quick selfie.

In April this year I travelled to Orlando for Star Wars Celebration. Another great event and by this time I had left the newspaper business and was working for another Star Wars site. Again, autographs collected for future write-ups. One evening we ended up in the bar at one of the very posh hotels across the way from Orange County Convention Centre. It was like Mos Eisley Cantina in there! I chatted with Daniel Logan and Corey Williams (son of Billy Dee) and Temuera Morrison was in the bar too. But who was that over in the corner? Ray was sat on his lonesome at a table relaxing with a beer (or three).

I was with my good American buddy ‘Big Kev’ who had interviewed Ray many years ago, just prior to the release of Star Wars Episode 1.

Not the shyest of folk, Kev reached out a hand and shook Ray’s.

“Hi Ray. You probably remember me? I interviewed you just before Phantom Menace came out.”

Ray looked a little perplexed. “Sorry man, no. It’s good to meet you though.”

I held out my hand.

“The first time we met was in Cardiff a few years back, I was on a press trip for the Midlands,” I said.

“Yeah that’s right. You had your son with you.”

I was really pleased that he remembered our first encounter. Kev was less so. Kev even looks miffed in our photo. 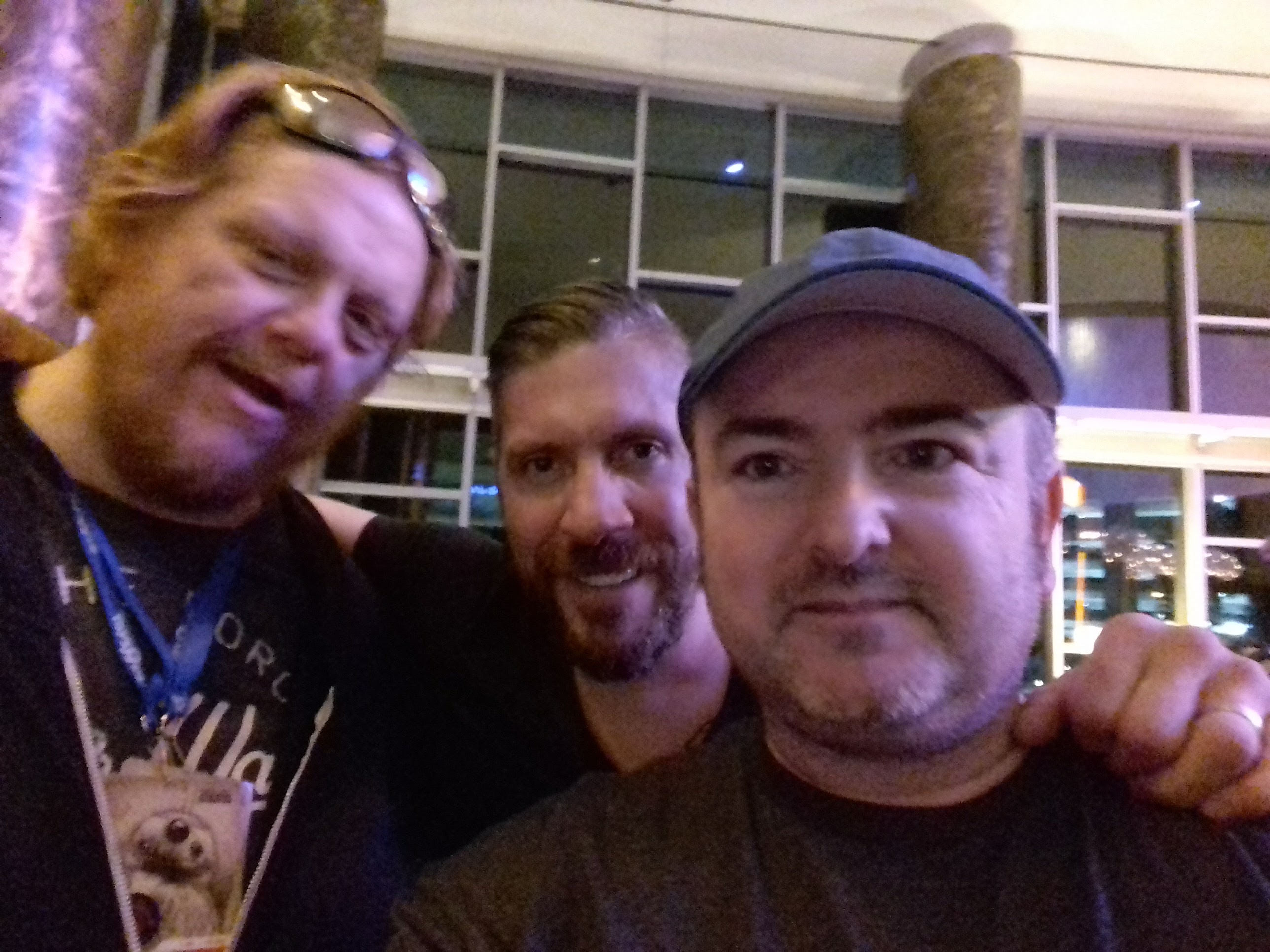 The Clone Wars: Ray Park is back to help bring Maul to life

Build A Maul And Give It A Heart!