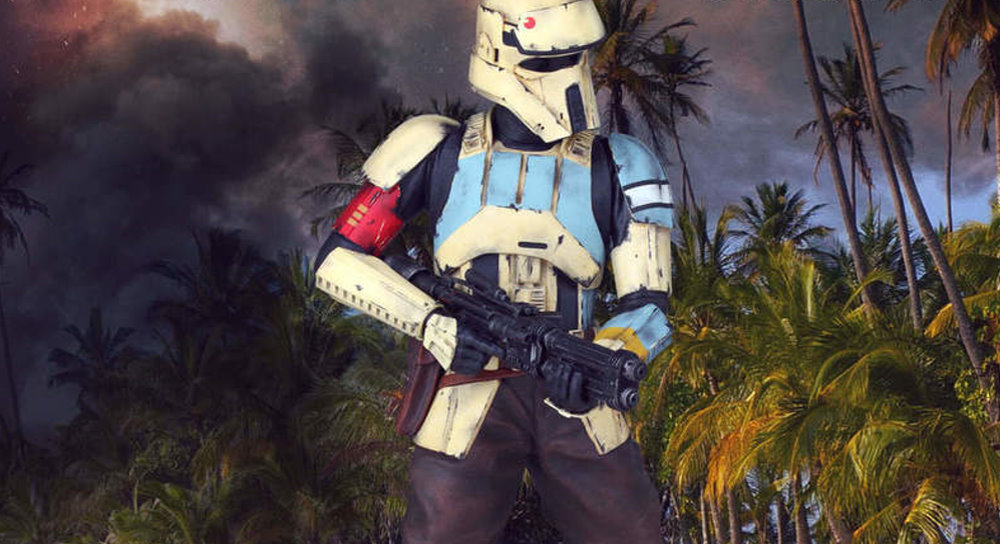 Labor Day is almost here and Gentle Giant have plenty of GFFA treats in their sale section, giving you the chance to grab some fantastic items before they revert back to their regular price point.

Here’s a look at just three of the Star Wars items on sale, and remember to get browsing as there are many more available. 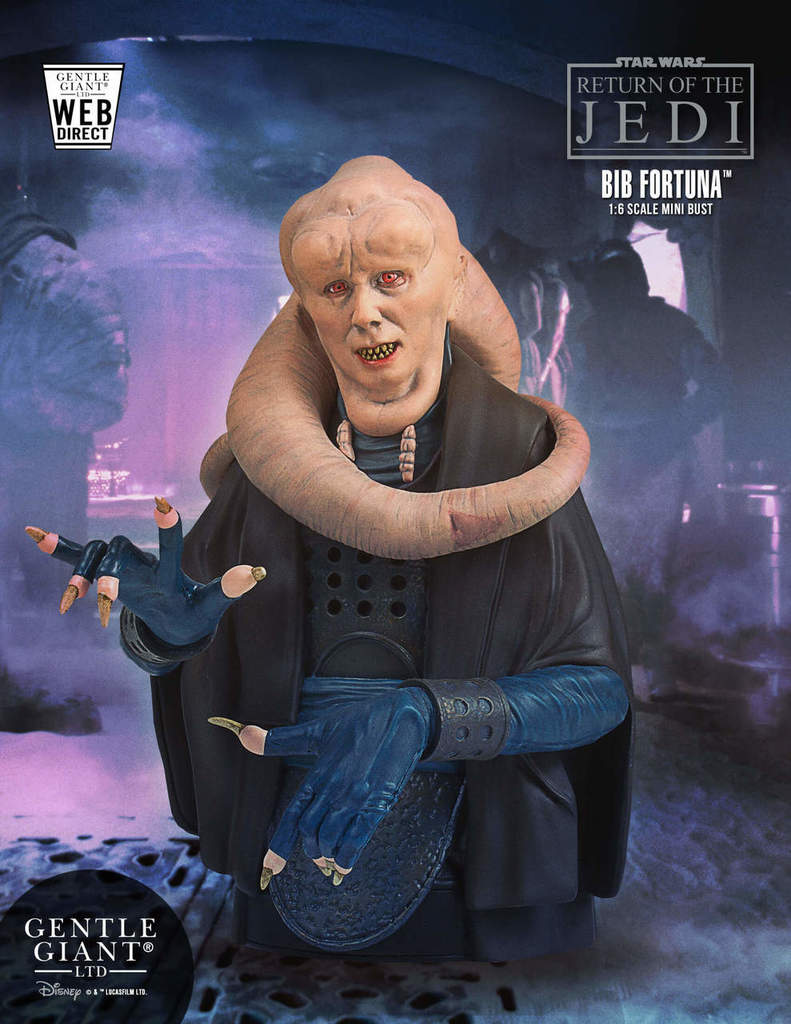 It is unknown how long the Twi’lek known as Bib Fortuna has served as the majordomo to the mighty gangster Jabba the Hutt, but we know that his service dates back at least to the Boonta Eve Classic pod race, won by the young, unknown competitor Anakin Skywalker. The pasty-faced right-hand-man is still in Jabba’s service several decades later when the son of Anakin Skywalker returns to Tatooine as a Jedi and seeks to bargain with Jabba for the life of his friend. It is during that encounter that Jabba learns that Bib Fortuna is susceptible to “Jedi Mind Tricks.” Fortuna followed the rules of protocol in the Hutt’s court (such as they were), and spoke only in Huttese, though he understood other tongues. The darkly robed attendant often hovered near Jabba’s ear, offering advice and feeding information to his master.

This 1:6 scale Bib Fortuna mini bust is painstakingly designed, modeled and prototyped using top of the line 3D technology so that no detail is missed. Each collectible mini bust is hand-cast, hand-painted and hand-numbered with a limited edition certificate of authenticity.

The Bib Fortuna mini bust will be limed to only 750 pieces.

This item will be web-direct only through GentleGiantLtd.com. Members of our 2017 Premier Guild will have an exclusive first order window for this mini bust.

Only one bust per customer. 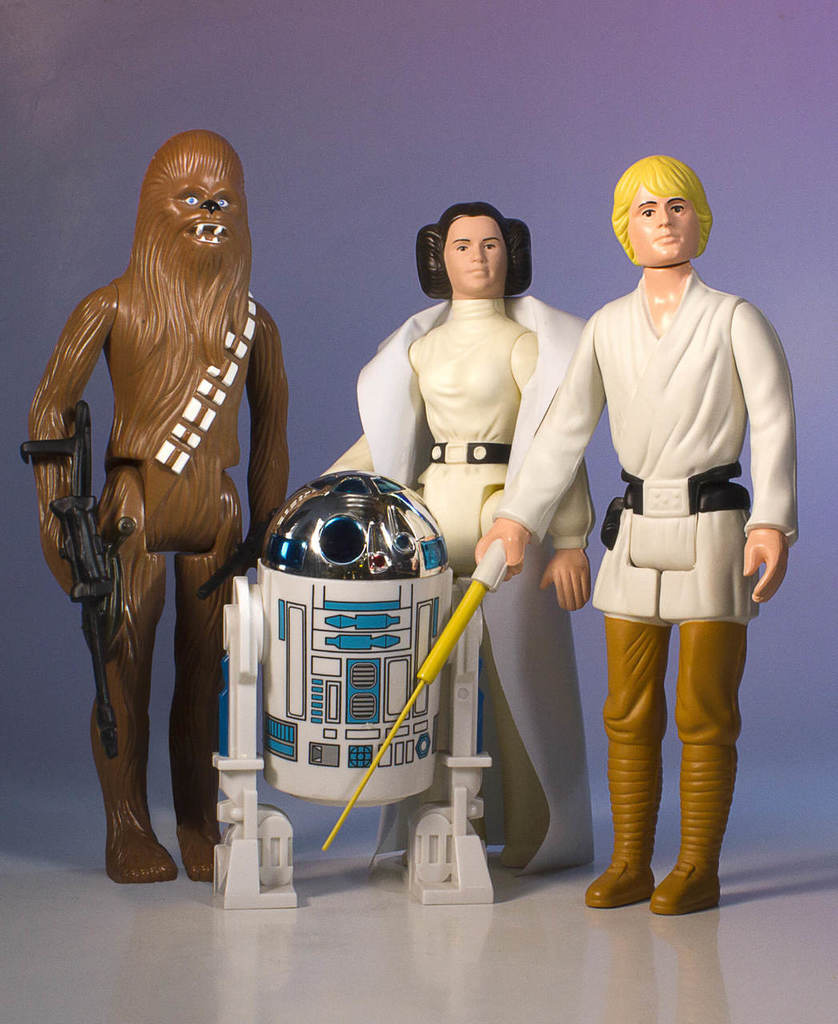 40 years ago a generation of kids saw a movie that changed their lives. When they left the theater and went to the store to find action figures from their favorite new movie they did not exist. When the holidays rolled around and the kids wanted to find their favorite heroes, villains and droids under the tree, none could be found. The toy makers solution to this problem was “The Star Wars Early Bird Kit.”

Parents, desperate for anything Star Wars to wrap for their kids, were sold a large cardboard envelope that had a fold out stand, some stickers, trading cards and a promise that WHEN the figures were made, they would be the first kids to receive them. Gentle Giant Ltd pays tribute to that classic Star Wars story 40 years later with the Star Wars JUMBO Early Bird 4-pack. This 4 pack of action figure is a great jumping on point to the Jumbo line for new collectors as well as bringing back some earlier, harder to find figures for current Jumbo connoisseurs.

The Early Bird Jumbo figure 4-pack will come in a retro box mimicking the original Early Bird envelope, inside will be the familiar white mailer tray with Luke Skywalker (with his double telescoping lightsaber. The first DT saber in the Jumbo line!), Princess Leia (with white vinyl cape and blue blaster) Chewbacca (with greenish Early Bird crossbow blaster) and R2-D2 (with clicking head). Also included in the set will be larger reproductions of the stickers and a large foldout, replica display stand that will hold the “original 12” figures along with the perforated cards attached to the front. Gentle Giant Ltd’s Jumbo line. Just like you remember, ONLY BIGGER! 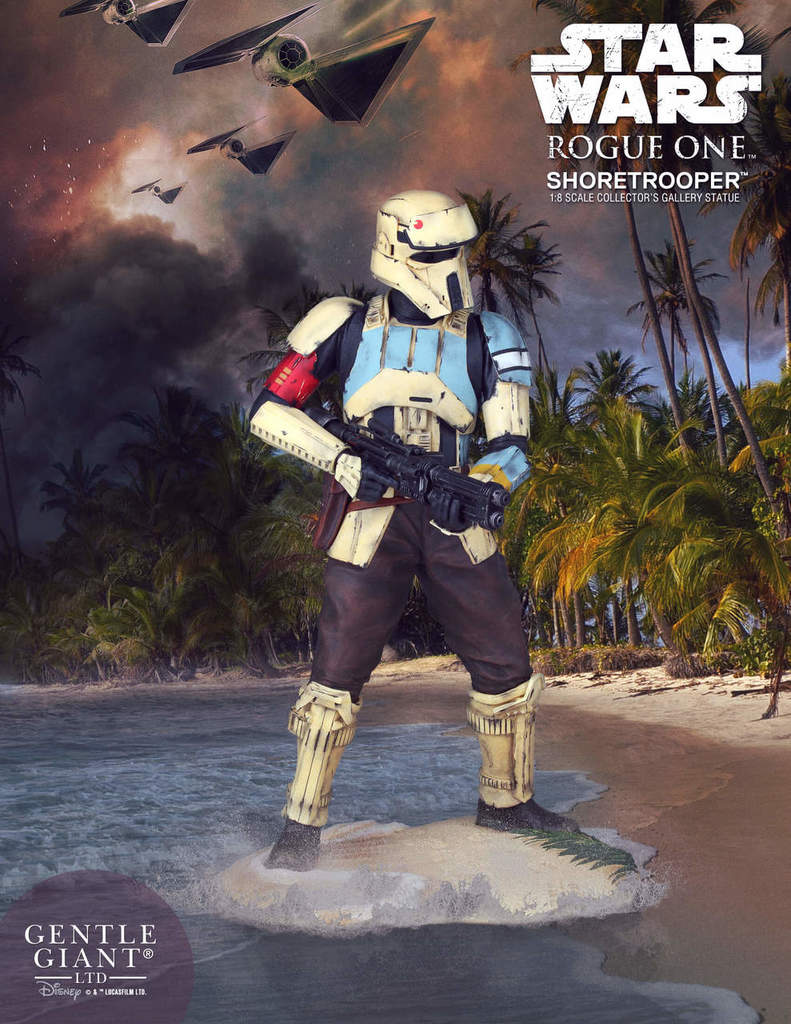 From Rogue One: A Star Wars Story; come the Empire’s Shoretroopers. Armored soldiers who patrol the beaches of the planet Scarif, the secret location of the imperial army and its Death Star construction facility. These well-trained, specialist Troopers are at the ready to defend against the always imminent Rebel incursions.

This Shoretrooper captain is armed with a heavy blaster and is depicted standing on the shores of Scarif, posed to take on the rebel insurgents.

Sculpted digitally to ensure precision form and character correct accuracy. Each detailed bust is cast in durable, stone-like, poly-urethane material that is cold to the touch. Featuring a heavy blaster-rifle, sculpted hip pouches and gear.

Every trooper is hand painted with correct rank and insignia applications with battle worn, weathered details. Each limited edition, hand-painted, polyresin classic bust comes individually numbered and is paired with a matching certificate of authenticity.

We have a winner! Tessek wins fan poll to become the Gentle Giant 2020 Premier Guild gift