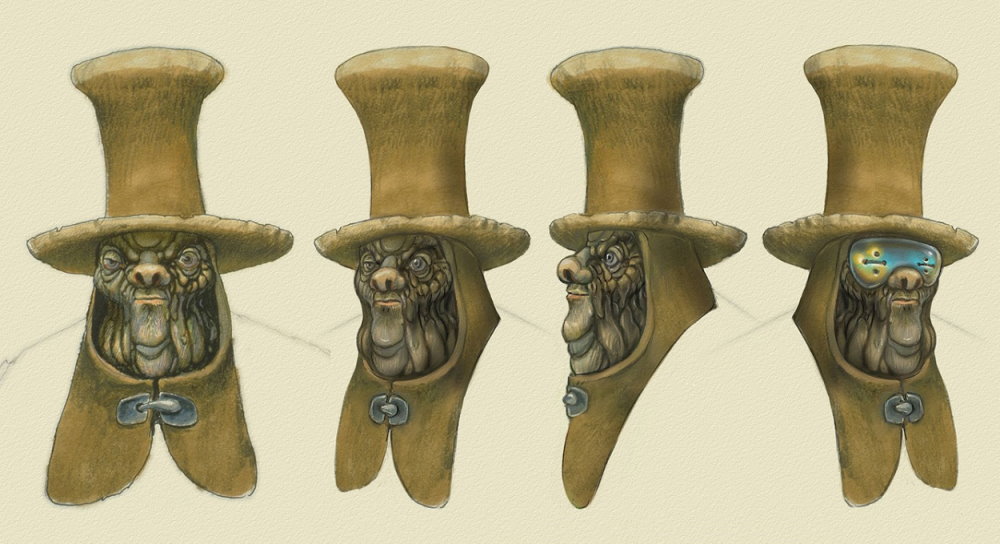 Regal Robot are artisans of Star Wars, creating, repairing and honouring the legacy of the original trilogy in a way few others do. Here we see how that work has evolved, giving fans the chance to have bespoke and unique items made specifically for them including this, a life-sized bust created from a single Ralph McQuarrie sketch, with a little help from a uniquely qualified friend.

The idea for this project popped into my head one day while I was enjoying the wonderful illustrations in the absolute must-have Star Wars Art book published in 2016.Bib Fortuna™ has always been one of those classic, mysterious Star Wars characters who had quirky and commanding design, but not a lot of backstory to inform the audience (a la many of the Cantina scene folks).  When I saw all of the different conceptual iterations sketched out, it really made the character that much more interesting for me, but the one drawing that hooked me was a color version of a gnarled, alternate universe Dickensian looking dude.  It immediately stuck with me.

When Regal Robot announced their Custom Character Studio, I thought that this would be a really unique drawing to bring to life.My biggest concern was the lack of source material – there is only one concept drawing of the character, as depicted, that exists.  I reached out to Tom and talked through the idea with him and he was onboard, no doubt.

Not only did Tom and his amazing team bring this project together, but they also enlisted a friend of the site – Paul Bateman – who also designed our Fantha Tracks logo.

An interim step that Tom took was reaching out to Paul Bateman, a concept artist, former colleague, and friend of the original artist who created the sketch.  Tom asked Paul to help him conceptualize the original drawing from different angles to try and give the character more depth – the end result was such an incredible interpretation of the original work; it was mind-blowing to see.

Head to the site to see the full story of how this amazing piece came together and for more from Tom, check out our videos with Tom when we visited Regal Robot studios in 2018.

Regal Robot and Brian Muir: Upcoming project announced, but what is it?

May the 4th: Save up to 25% on selected Regal Robot items