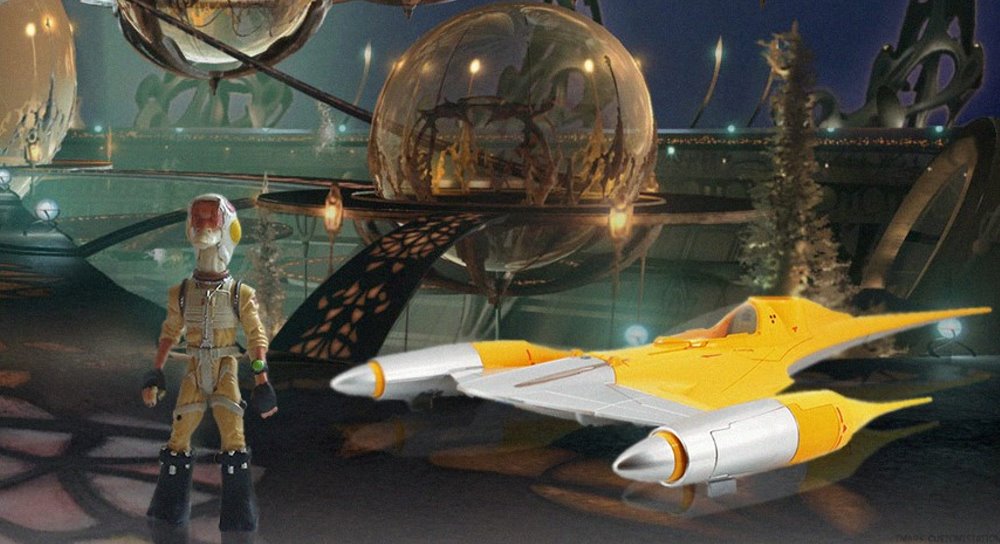 Within a fodder (spare parts) lot, I had acquired a Jar Jar Binks figure, complete except for missing his Haillus (Gungan ears).

Whilst I could only wonder at what fate had befallen this sad figure, his condition presented me with the inspiration and opportunity to customise our comedic character towards a more serious persona.

Rifling through my boxes of fodder, I came across a Bossk figure torso with attached upper arms and legs, like a Gungan egg, a plan was hatched.

Removing Jar Jars head, forearms and lower legs with a modelling saw blade, this was followed by using one of my favourite and useful modelling tools, the trusty pin vice drill.  Although a manual tool, this drill affords much control.  The drill was employed to bore holes of approximately 1 inch into the centre of each freshly sawn surface of limbs and head.

Metal rods, cut to approximately two inches long, were dipped into a cement solution and fed one inch into each of the limbs then left to set.   When the rods had bonded within the limbs and head, each one in turn was aligned with the Trandoshan’s torso.  Pressing each appendages exposed metal rod tip into their respective destinations, just enough to create a pilot mark.

The pilot marks were then used as a guide for the pin vice drill to bore 1 inch holes.  The exposed metal rods tips for each loose part was brushed with cement solution then gently teased into their new homes, with a little on each contact surface for good measure, then pressed flush and left to cure.

While this figure was beginning to take shape, further work was required to blend the donor parts together and sympathetically cover his lack of ears.  Employing two part epoxy putty, Milliput’s Yellow & Grey, I worked some putty around the Gungan’s toes and shaped into boots.  Chrome rods were cut to resemble Rebel Pilot leg flares which were then dotted around the boot and strapped into position with thinly rolled putty which was then pressed flat.

Another of my favourite modelling tools, dental picks were used to tidy the shaping of boots and leg flares.  For fun, a pick’s grip was pressed into the still soft putty on the outer boot, creating an interesting shape and texture.

Moving upwards, I opted to use some putty to shape fingerless gloves and a watch, in case he needed to synchronize plans.

Next was the main build challenge, the helmet.  The helmet was constructed using more epoxy putty, shaping towards something which would complement the unique shaping of our Gungan’s head and house, but in this case hide missing, Haillus.

If you’ve read any of my previous articles, you’ll be aware I’m a bit of a hoarder and like to rescue/recycle items.  In this case the helmets visor, which was formed by using cuttings from a clear coloured shampoo bottle which was secured into the helmet sculpt to dry.

When everything was dry and hardened, acrylic paint was used to paint his boots, gloves and helmet.  Always use acrylics on these figures as other paints can refuse to dry, crack or even melt the plastic.  Be very careful of cement glue also as this melts two plastics together, so less is always more and work from there.

Getting back to the finishing touches, I used waterslide decals and sealed these with matt varnish. You might have noticed that despite all this customising tinkering, I refrained from painting the Trandoshan spacesuit.  Perhaps a tad lazy but deliberate, I felt that a fictitiously formed Gungan/Nabooan or Gunganabooan, alliance could lean towards yellow uniform as worn by Naboo military divisions, namely Security, but was mainly influenced by their strikingly bright yellow Starfighters.

Keen eyes might have noticed that the side view of our pilot’s helmet reveals shaping and colouring, unintentionally, resembling a fried egg, well it is Gungan-esque I guess.

And with a little Photoshop magic, I’ve created an image to celebrate the arrival our newly created custom Gungan Pilot.

Customising Your Fandom: Are These The Custom Astromech’s You’re Looking For?

Something Old, Something New, Nothing Borrowed, But Something Blue

Customising Your Fandom: A Wullf In Galactic Clothing