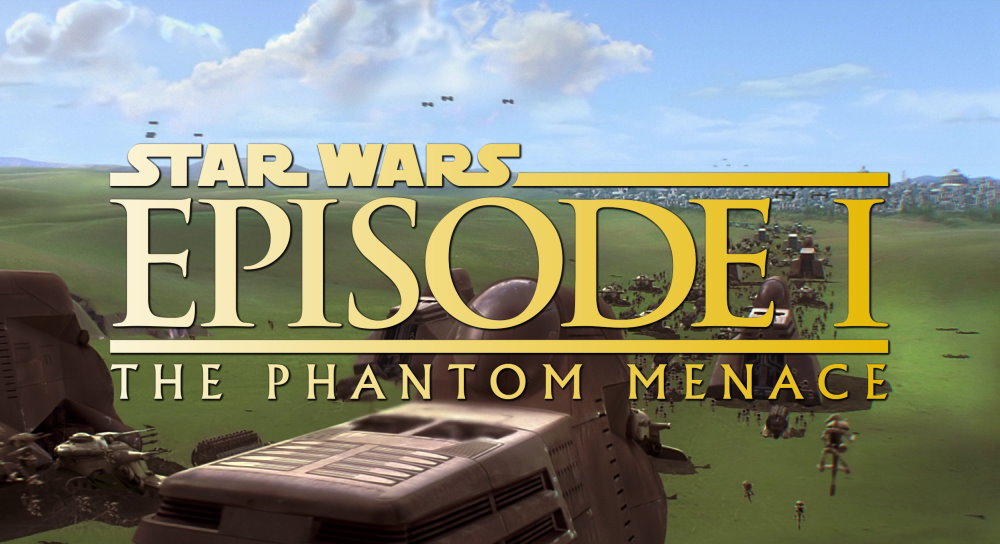 While this in-depth article series to celebrate the 20th anniversary of Episode 1 – The Phantom Menace mostly deals with stuff we see in the movie, there are times we will be taking short detours. One of those is this article that focuses on the unseen (dare we say Phantom?) aspects of the Invasion and how the (Legends) game of ‘Galactic Battlegrounds’ fills in some of the gaps of the movie.

OOM-9 And The Subjugation of Naboo

“We must move quickly to disrupt all communications down there.” – Nute Gunray to Rune Haako.

The movie cuts from the Neimoidians to Naboo with Queen Amidala talking to a hologram of Palpatine, but they quickly lose contact with the senator. How this is happening is the first time that the game ‘Galactic Battlegrounds’ steps into the story of the movie and expands on it. ‘Galactic Battlegrounds’ was a real time strategy game released in 2001 that featured story campaigns from the by then released movies of the Original Trilogy and The Phantom Menace, with a training campaign centered on Obi-Wan Kenobi and Qui-Gon Jinn helping Chewbacca and his father Attichitcuk establish a settlement on Alaris Prime.

The later released ‘Clone Campaigns’ expansion added missions based on Episode II. ‘Galactic Battlegrounds Saga’, the combined release of the original and expansion pack, is available on Steam.

With the invasion army standing ready to invade, it becomes imperative that word of the invasion cannot reach Coruscant. OOM-9 has landed with a small detachment some distance from Theed. Objective is to destroy the communications capability of New Centrif, Vis, and Parrlay. Despite arriving at New Centrif first, OOM-9’s forces are too few to confront this bigger city, and thus the droid takes a detour to Vis first. There he overwhelms the Naboo Security Forces in a pincer movement, attacking from the front and with reinforcements coming in from the rear. These reinforcements, and Naboo being a peaceful planet, make it easy for OOM-9 to conquer Vis and destroy the first transmitter. With the reinforcements, New Centrif’s transmitter is the next to go. Besides OOM-9 one other B-1 battle droid got a designation: EEK-176, who was part of the initial landing force. OOM-9’s game model is him in his AAT.

With Parrlay also subjugated, the Invasion has begun and the troops can land, as we saw in the movie.

Mission 02 – Behind The Lines

Thanks to a malfunctioning commander droid, Naboo forces have managed to steal one of the five droid control programs needed to activate the droids. OOM-9 launches an attack on the city Harte Secure and with the help of a Neimoidian technician manages to retrieve the control plan and activate the troops of OOM-14. With that army activated OOM-9 is ordered to destroy Harte Secur as punishment. During this mission the droids also encounter the Gungans for the first time.

Easter egg alert: By using the cheat codes “Forceexplore” and “Forcesight” you spot Qui-Gon, Jar Jar Binks, and Obi-Wan Kenobi in the western corner of the map. This fits with the movie timeline seemingly well enough as this mission happens early during the invasion.

Harte Secur, like Vis and New Centrif, received mentions in the short story ‘End Game’ that was published in the paperback edition of the latest reprint of the movie’s novelization.

After the Trade Federation’s win they set up a base of operations in Harte Secur and build Detention Camp Six nearby. This Camp was freed by the Gungan Grand Army in order to free the fambaas to later use in the battle on the Grassy Plains. This was a mission for the Gungan Campaign of this game.

With OOM-9 exceeding in his parameters, a pleased Nute Gunray tasks the droid commander with raiding Spinnaker, Naboo’s chief supply center that is overflowing with riches thanks to the blockade stopping all traffic. Gunray wants to see the wealth of Naboo in his pockets before fully committing to the costly occupation of Theed.

While the movie shows that the Jedi are making their way to the city by travelling in a Gungan bongo, the Trade Federation forces have reached Theed and capture the Queen. This game however shoehorns another mission in between the forces arriving outside Theed and the landing of Viceroy Gunray.

Apparently a signal jammer has been set up near the palace that prevents the droid-controlled starfighters and transports from approaching. OOM-9 and a battalion of elite units enter Theed to destroy the signal jammer. Despite the Queen having advised her military to stand down the Trade Federation battle droids still encounter stiff resistance before managing to complete their tasks.

And thus ends the invasion segment of the OOM-9 campaign. The next two missions are The Search For An Underwater Kingdom and The Siege of Otoh Gunga, but we will cover these in an upcoming article.