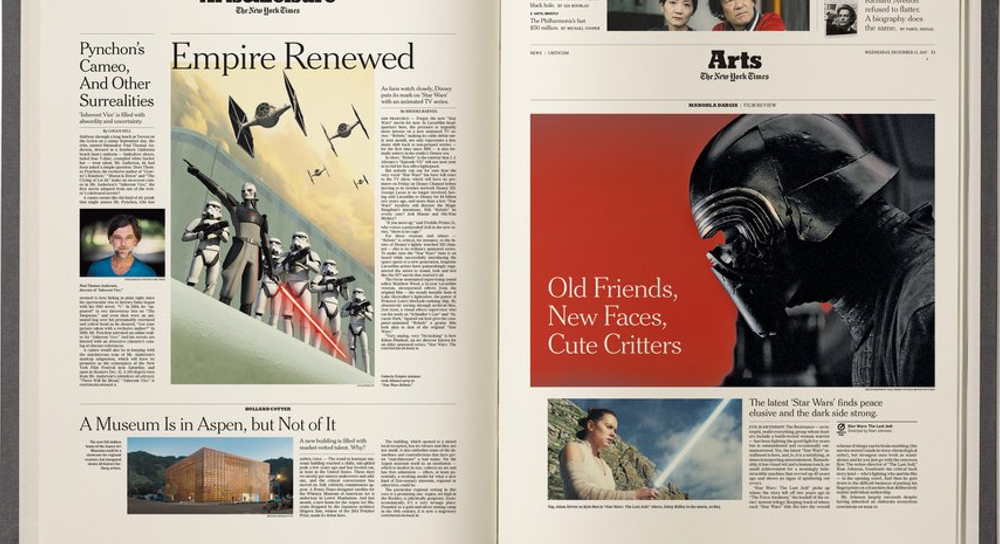 The NY Times has released a new Star Wars book, “In a Galaxy Far, Far Away.”

The 12″ x 15″ coffee table book chronicles the public and critical reception of the sci-fi film and its historical and cultural impact. It contains all the important Times articles about the films and their legacy, including reviews, news articles, graphics, photos, obituaries and behind-the-scenes exclusives.

Four years before the first “Star Wars” movie was released, The New York Times signaled to readers that the sci-fi film was approaching our world. In a 1973 feature on director George Lucas, Judy Klemesrud wrote, “George is currently working on another science fiction screenplay, ‘The Star Wars,’ which he describes as a ‘real gee whiz movie’ in the Flash Gordon-Buck Rogers tradition.”

The movie title was later shortened and when it opened in 1977, Times film critic Vincent Canby knew he had seen something special. He wrote, “Star Wars is the most elaborate, most expensive, most beautiful movie serial ever made.”

“In a Galaxy Far, Far Away” is the ultimate anthology of Times coverage of the “Star Wars” franchise. This “Star Wars” history book, packed with more than 85 reprinted Times pages, takes you on a fantastic journey from the 1970s to 2017’s “Star Wars: The Last Jedi.”

An epic gift for the diehard Star Wars enthusiast, the hardcover book features stately leatherette binding and its cover can be personalized. The pages are printed on premium paper with a light gray tint to accent the historical nature of the pages. Each book comes with a 2.5″ x 7.5″ magnifier and a certificate of authenticity.

Our friend Steve Sansweet from Rancho Obi-Wan has his copy, and has a video review up.

Show your support for Rancho Obi-Wan

Take a tour of Rancho Obi-Wan

Celebration Anaheim 2020: Star Wars With Friends is back