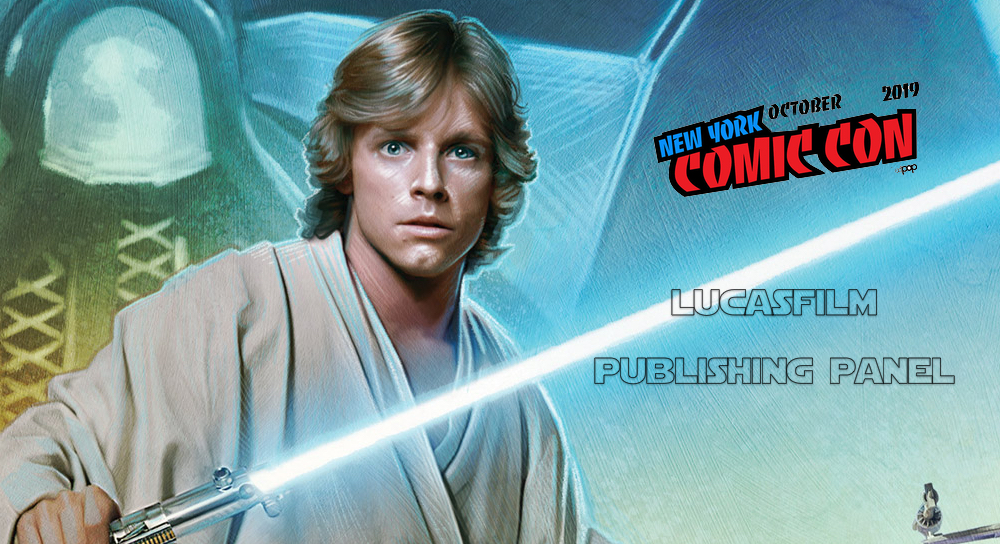 As well as covering the books that these authors have released / have coming out as part of the Galaxy Edge and Rise Of Skywalker publishing programmes – the panel also announced a number of new projects coming in 2020.  We re-cap the announcements below:

Project Luminous remains under wraps, with full details due to be announced in January.   Siglain tells the audiance that everyone from Del Rey to Disney Lucasfilm Press to Marvel and IDW are sworn to secrecy about the project.

Charles Soule says that he is also sworn to secrecy over the upcoming comic series Rise Of Kylo Ren.

“You guys aren’t ready for this.”

Rae Carson will be writing the novelisation of the Rise Of Skywalker.  Rae has previously written Most Wanted, the Solo: A Star Wars Story tie in novel, as well as had entries in From A Certain Point of View and Canto Bight.  The novelisation will be out on the 3rd March 2020.

A Junior Novelisation will follow from Michael Kogge on 21st March 2020.

Christian Blauvelt will pen Use The Force: Discover What It Takes To Be A Jedi from DK out on 20th March 2020.

Christian Blauvelt has another book- Use The Force. Aimed for kids. #SWBooksNYCC pic.twitter.com/Ey9YFXUwqD

A manga adaptation, printed by VIZ Media The Legends Of Luke Skywalker: The Manga will release in early 2020.  Adapted from the novel by Ken Liu.

Disney Lucasfilm Press will release a Clone Wars Anthology on 25th August 2020.  Which will include a Zoraida Córdova short story featuring Ventress.

George Mann will be writing a book in a similar vein to his Myths & Fables book, but with a dark twist, Dark Legends.  The first tale will be about the Grand Inquisitor.

Issue #75 takes Star Wars to just before The Empire Strikes Back.

This is the last of the existing ongoing Star Wars title.

In November all Star Wars titles will be subtitled Destination: Hoth.  Empire Ascendent #1 leads into The Empire Strikes Back.

Charles Soule takes control of the main Marvel comic in January with a new Star Wars ongoing series, restarting at #1 with Jesus Saiz on art.

It will be set just after The Empire Strikes Back.

Greg Pak will be writing a new Darth Vader series, with #1 launching in February. Art will be by Raffaele Lenoo.  The comic will also be set post The Empire Strikes Back.

“We’re going to explore Vader’s mindset – and what he has lost.

Further Doctor Aphra, and Bounty Hunter comics are teased but nothing revealed.

The sequel to Alphabet Squadron, Shadow Fall will arrive in June 2020 written by Alexander Freed.

A new Thrawn origin story from Timothy Zahn will be begin in May 2020.

And with that surprising last announcement, the panel ends.

Take a closer look at the The Tiny Book of Grogu, from Insight Editions

Save big on Comixology if you buy through Amazon

The Secrets of the Sith: Sith tales told by Emperor Palpatine

‘Secrets Of The Sith’ To Be Revealed In New Book