Facebook
Twitter
ReddIt
Pinterest
WhatsApp
Email
Tumblr
As a continuing series of articles looking at how Star Wars products were promoted in the UK, our first part looked at the comic book advertising for the toys during the original release of Star Wars A New Hope.
In an era of only one television channel in the UK that supported TV commercials, the weekly outreach of the UK Comics industry provided a more cost-effective approach as a platform to find the intended audience. For our second part we look at the changing influence The Empire Strikes Back had on the promotion of the toys by Palitoy, the UK distributor for the Kenner toyline.
By 1980 and the advent of the next instalment of the original Star Wars trilogy, The Empire Strikes Back, the floodgates were open for United Kingdom as far as toy products were concerned. Where once retailers were a little apprehensive to committing to every product, they now could not get enough and manufacturing had been significantly scaled up to meet the demand. The Star Wars brand was becoming established, along with the use of standard logos across all platforms and licensed products. 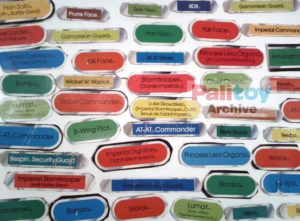 As the new chapter was to take the story in different directions, so did Palitoy’s approach with the toy advertising in comic books, forming part of a larger cross promotional campaign, rather than an individual toy itself. Over in the US, Kenner were successful with direct to consumer and mail away promotions, redeeming product in exchange for a required number ‘Proof of Purchase’ motifs pictured on the packaging. These incentives were often advertised through the toy packaging itself, with a ‘flash’ hint on the front of the action figure blister card with details on the reverse. Palitoy did not feature an equivalent on their packaging, instead opting for fans to cut out the name badge of the character from the front of the packaging and promote the incentive mainly through comic book adverts. 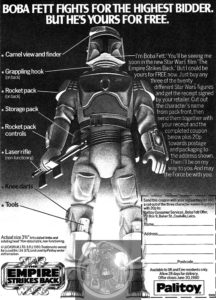 The first promotion introduced Boba Fett and featured an advertising style quite unlike anything attempted before. The advert is dominated by a beautiful close up oblique, cantered angle air brush painting of the action figure itself. Presented in black and white and a transition fade in the background, Boba Fett was already imposing without knowing anything about this new character. A little copy gave background detail along with how to acquire one, plus annotation of specific features and accessories on the figure. It is interesting to note that the ‘Laser Rifle’ is ‘non-functioning’ compared to the other notes like ‘grappling hook’, ‘rocket pack’ and ‘knee darts’, I wonder if this somehow relates back to the non-functioning rocket firing mechanism associated with Kenner, but incorrectly labelled for the advert.

We also see for the first time The Empire Strikes Back logo that is carried across all Palitoy toy releases. The advert and artwork for the promotion was adapted in various formats, including a flyer for direct in-store advertising and also as a smaller single column advertisement that also included a checklist, cross-promoting the new action figure releases that were available. 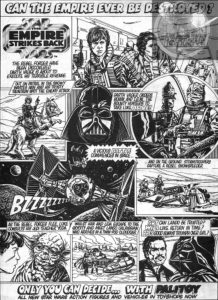 If there was a prize for most toy product placement in one advert, it would be given to this epic effort. This beautifully illustrated comic style strip, loosely based on the events of The Empire Strikes Back manages to cram a total of 15 toy products into one page at a dynamic pace with certain elements like Vader and the TIE Fighter breaking through the frame. It is interesting to note that this is the first advert not to feature a Palitoy company logo. 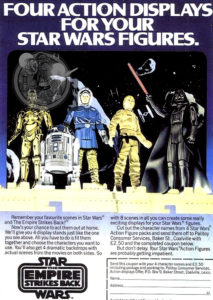 The Empire Strikes Back run of toy advertising through comic books is my favourite era, but the mail-way Display Arena is perhaps my most beloved. Created by the same artist behind the Boba Fett advert, it presents 5 action figures on the display using the same oblique, cantered angle as before, but significantly in glorious full colour. The artwork is beautiful, and the character choices in full colour perhaps draw more attention by themselves more than the item the are supposed to be promoting. 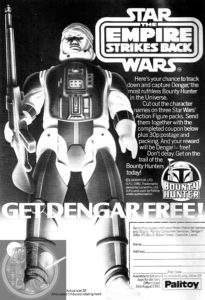 The next two adverts link together a direct to consumer initiative that was unique to Palitoy. Borrowing from their experience with Action Man ‘Stars’, a loyalty programme designed to encourage product sales and promoted within boxed products, Palitoy created the Bounty Hunters programme. A Boba Fett motif was created to adorn packaging of larger items like vehicles and playsets to represent the equivalent of the name badge plates, fans would continue to cut these ‘captured’ items out and redeem for Bounty Hunter rewards. The last (at least for Palitoy – but that is another story for another time) of the amazing low angle action figure air brush artwork returns for an ominous Dengar promotion. The second expands the offering of the Bounty Hunter promotion as a whole with a focus on the largest item that was available during the promotion, the Darth Vader carry case. 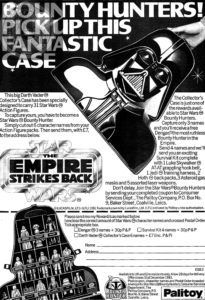 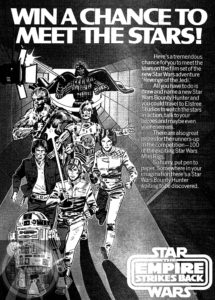 The last promotion is a curious one, an opportunity to visit Elstree Studios to the set of ‘Revenge of the Jedi‘ and also meet the stars, all you have to do is create, draw and name an all new Bounty Hunter … and then … and then …, well there is no further information to signpost what to do next, considering the adverts appeared in non-Star Wars comic titles, it must have run into a little confusion for some at the time. The artwork is great though with the Rebels running away from Darth Vader whilst filming. There are some odd artwork choices, such as Leia’s A New Hope ‘bun’ hairstyle with her Hoth outfit and a possible spoiler of Han Solo free of carbonite, but helped draw The Empire Strikes Back era to an end before the third instalment of Star Wars toys with Return of the Jedi.