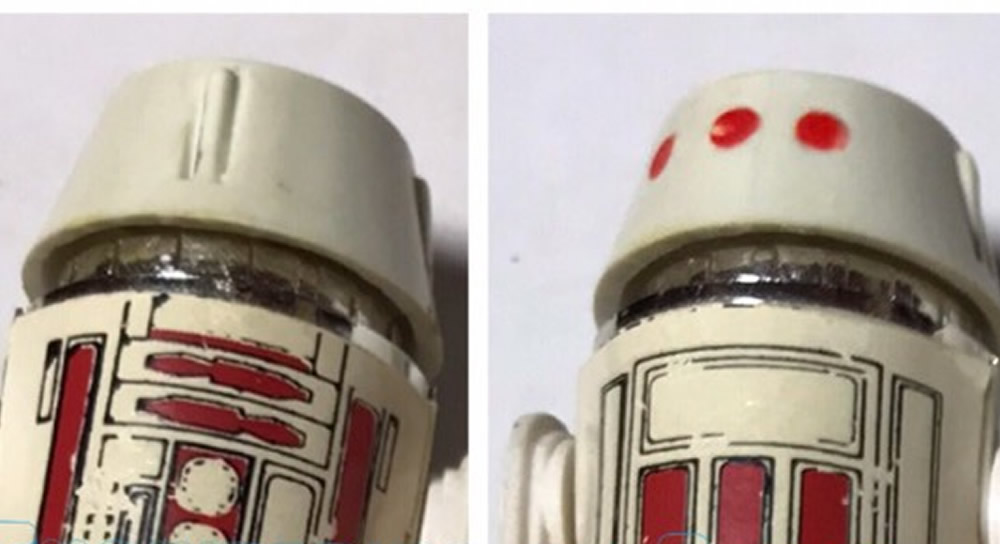 As most of my fellow Star Wars collectors are aware, I am an R5-D4 vintage and modern  collector. I collect everything I can find with the little red robot on and many people ask why? It’s hardly the most toyetic of the Kenner line and I even call my collection the R5-what4? (Look out for my swag at Celebration Chicago!) 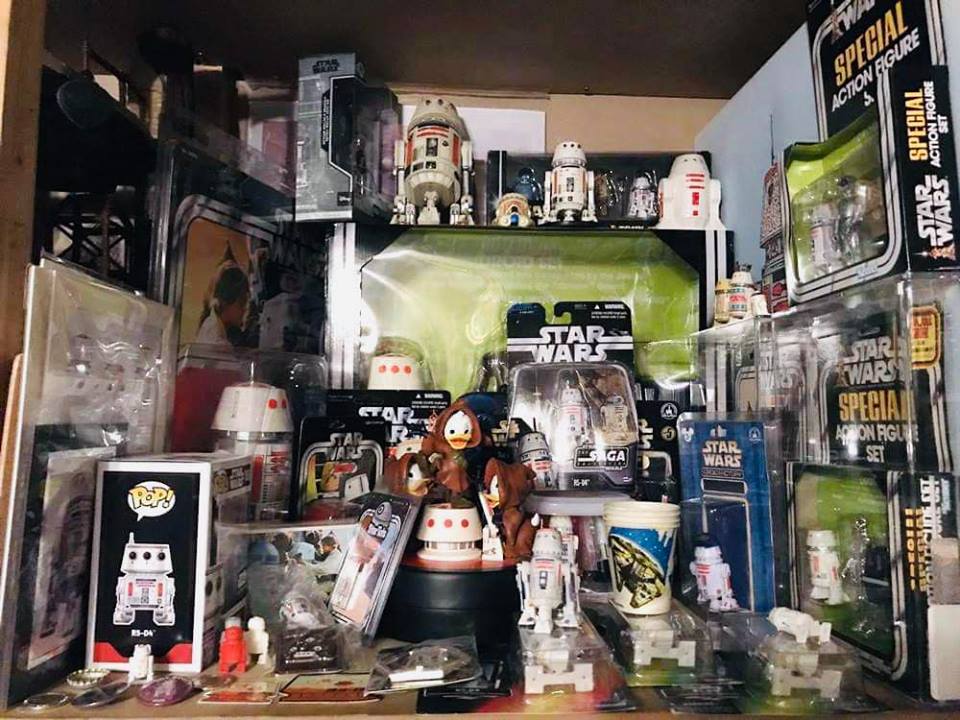 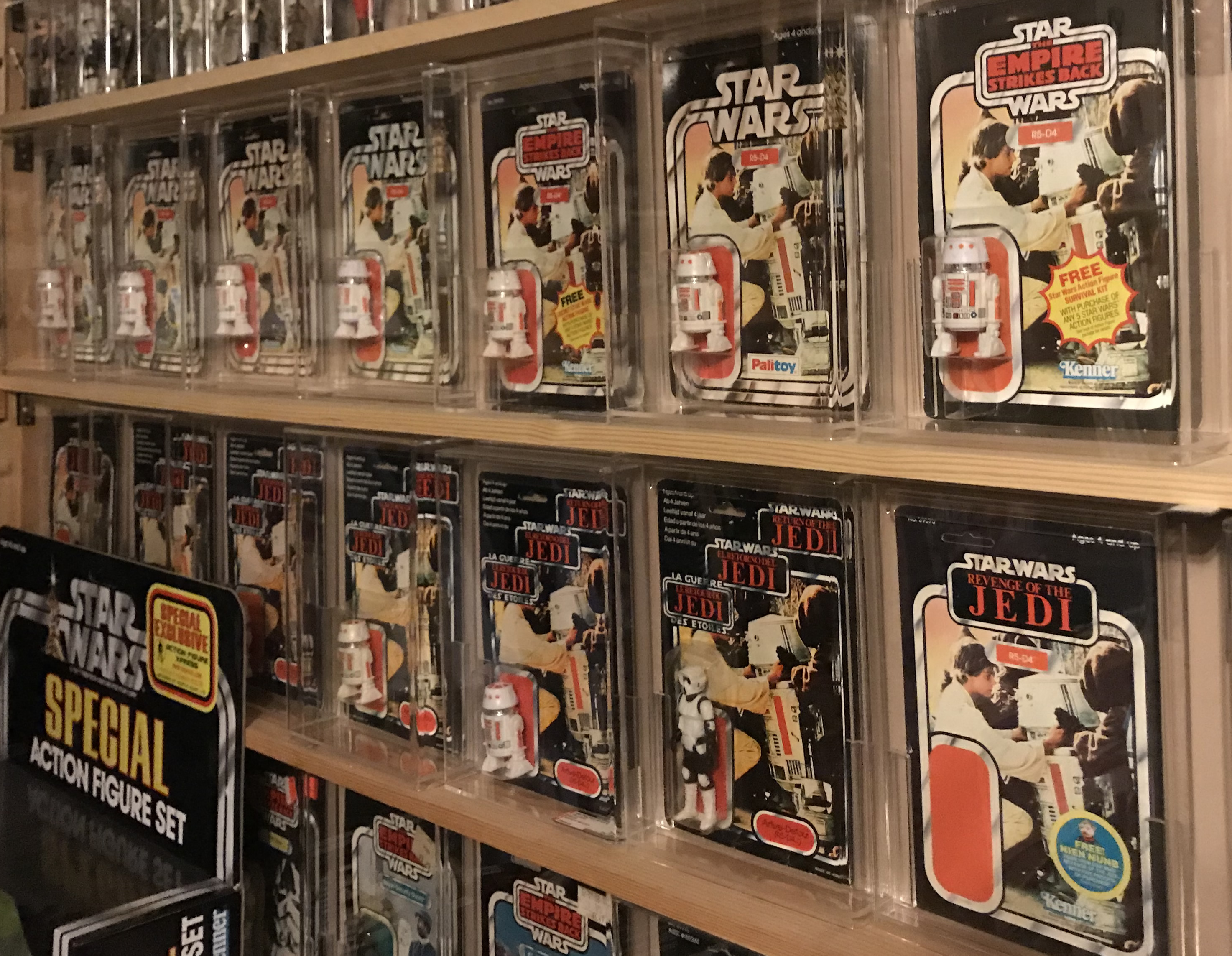 I’ve always liked the little red robot but I’ve never considered it one of the best action figures. It didn’t even have much action in the movie let alone as a toy. I was not aware of any R5 collectors when I started and I’m ecstatic to say there are a few now who delight in sharing their collections with each other for cataloguing and research purposes. One of the reasons I chose R5 was that I, wrongly, thought most items would be easily obtainable, cheap and that there is a lack of pre-production items for me to source. 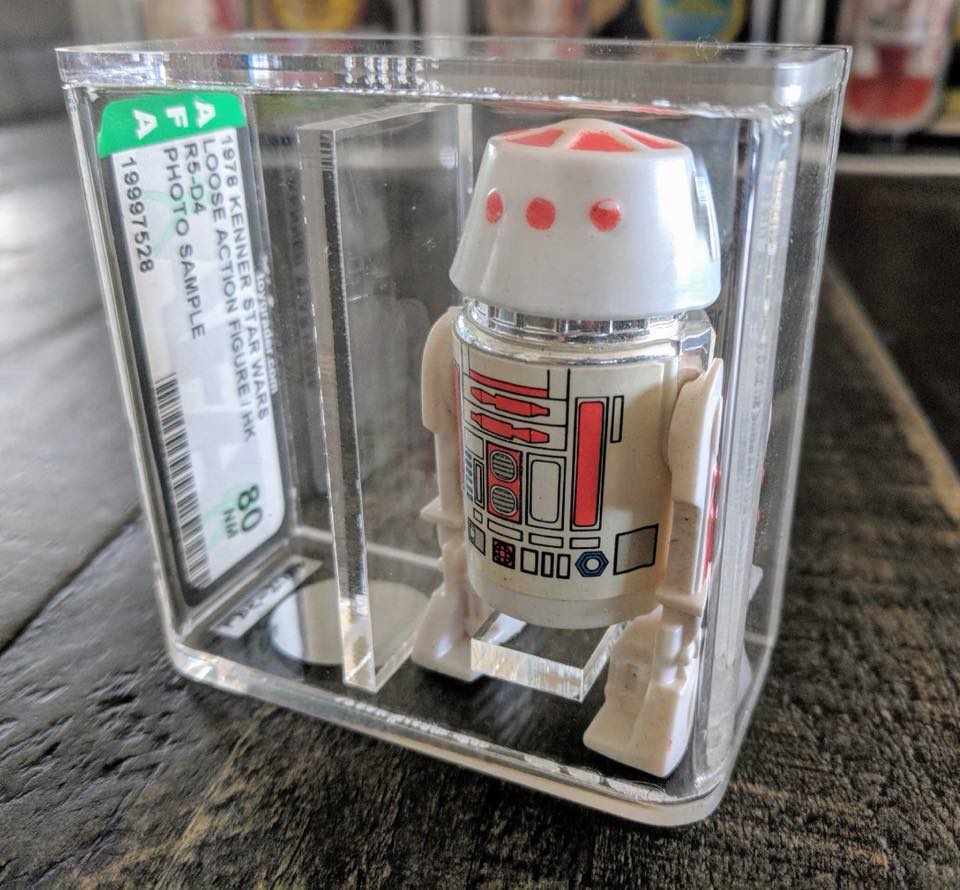 Over the years, new discoveries have been made such as the red bar variant, incredibly tough to track down foreign cards and a photo sample pictured here. Indeed, it was thought that this photo sample was the only piece of pre-production known to exist for a long time. This R5-D4 was used for the photography found on the back of the Kenner 65, 77 and 92 cardback – you can tell by the ‘blinking’ eye.

Enter 2019 and this little gem is turned up by Matt George, co-author of the forthcoming Building an Empire book. Matt is one of the hobbies nicest guys and I’m delighted that not only has he got to meet many former Kenner employees, but he also owns this bad boy in his collection. 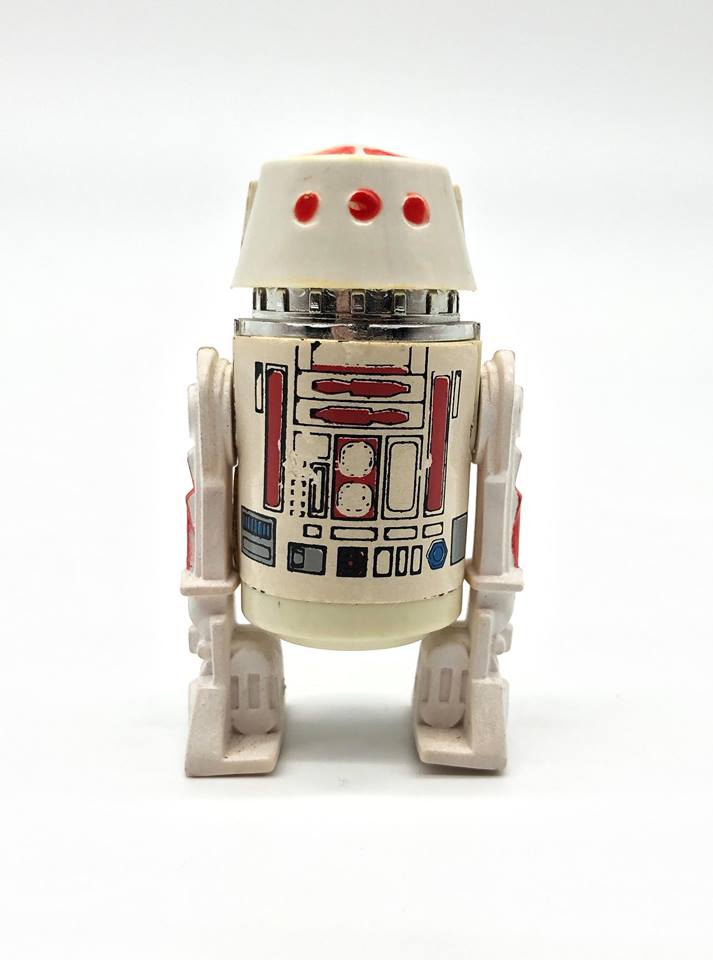 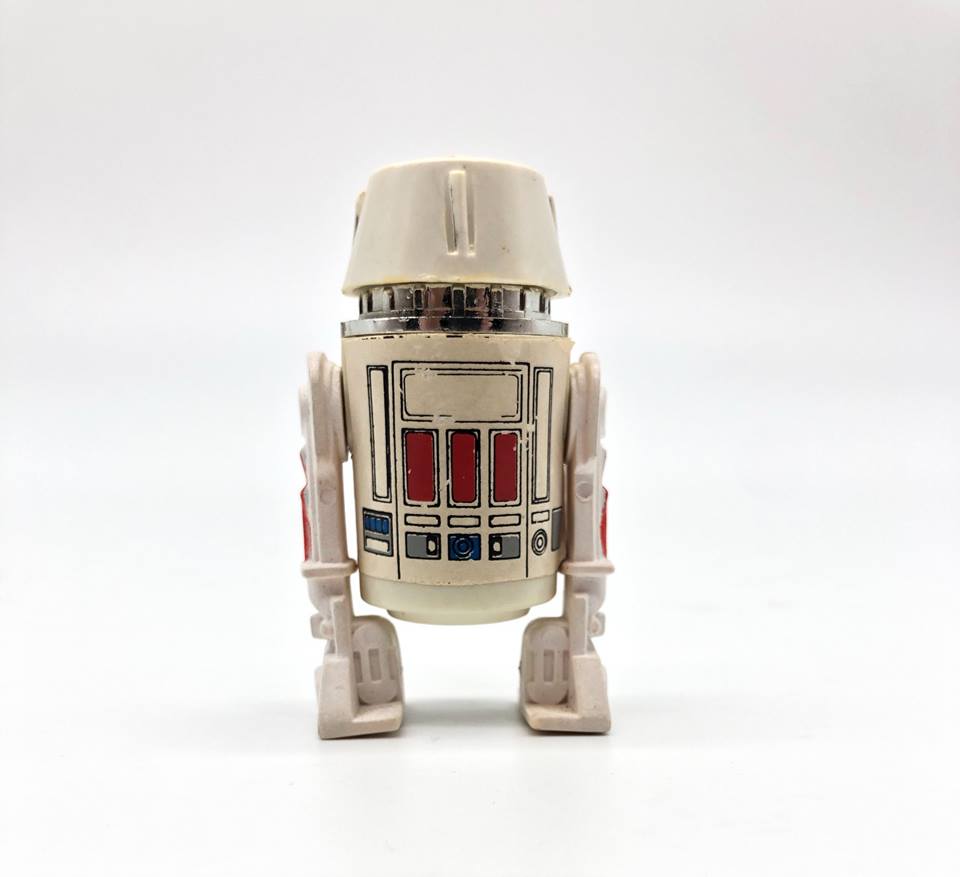 What you see here is a pre-production R5-D4 with what’s likely to be a protomoulded head obtained from a former Kenner engineer. The term protomoulded refers to the stage in toy production whereby aluminium moulds were used to quickly create toy parts in-house at Kenner without needing to make hardcopies. The aluminium moulds were shot with plastic internally at Kenner without the need for a 3rd party which would be costly and have longer lead times. 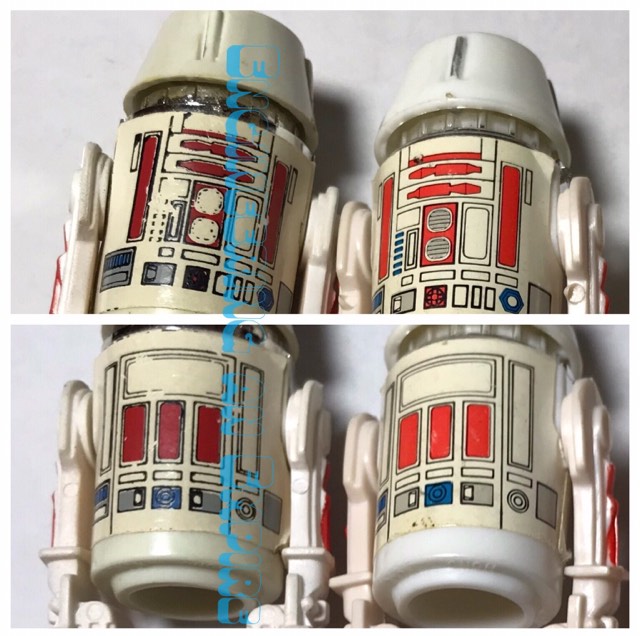 Matt has identified that unsurprisingly the body and legs are from the earlier R2-D2 action figure. As you can see from the side by side shot there are a lot of differences between this R5 and the regular production run on the right.

To answer the questions from the doubters, after all, how does this still survive after 40 years of searching from collectors, Matt has also matched it to the insert from the collector’s case more famous for the photograph of the kit bashed Boba Fett that is still actively hunted. 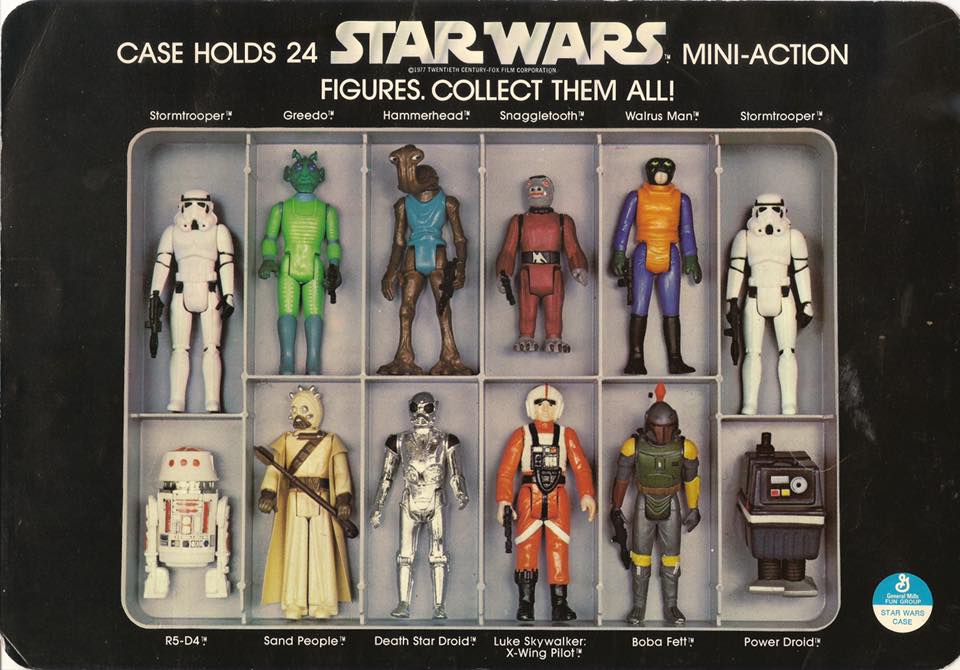 There are also minor height and diameter differences between the two and a lack of clicking mechanism, oops I earlier said that this figure lacked action and there you go!

So, what else could turn up?  Here’s hoping a wood pattern has survived!

My Week in Star Wars