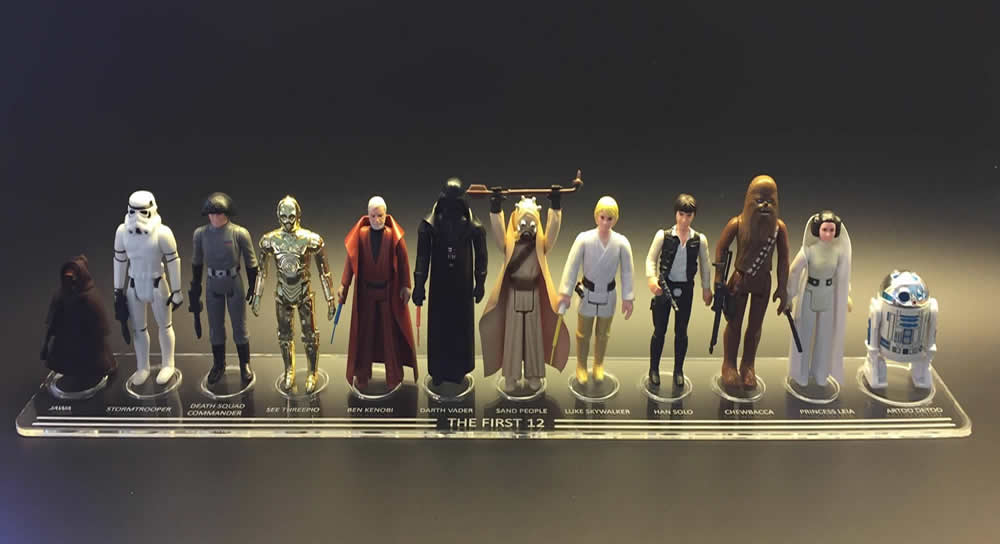 After I released this article I had a few questions on Facebook as to where I purchased the stand for my diecast TIE Fighter which sits proudly in the Death Star hanger.  For a number of years I’ve been concerned about the weight of the larger vehicles on wing brackets, especially the expensive TIE Bomber, and was delighted when Iain Sanderson of Iain’s Display Accessories brought a new product onto the market.

I think photos are the best ways to do these products justice so here are all my diecast shots.  I’ll start with the ones that could fit in a Death Star hanger! 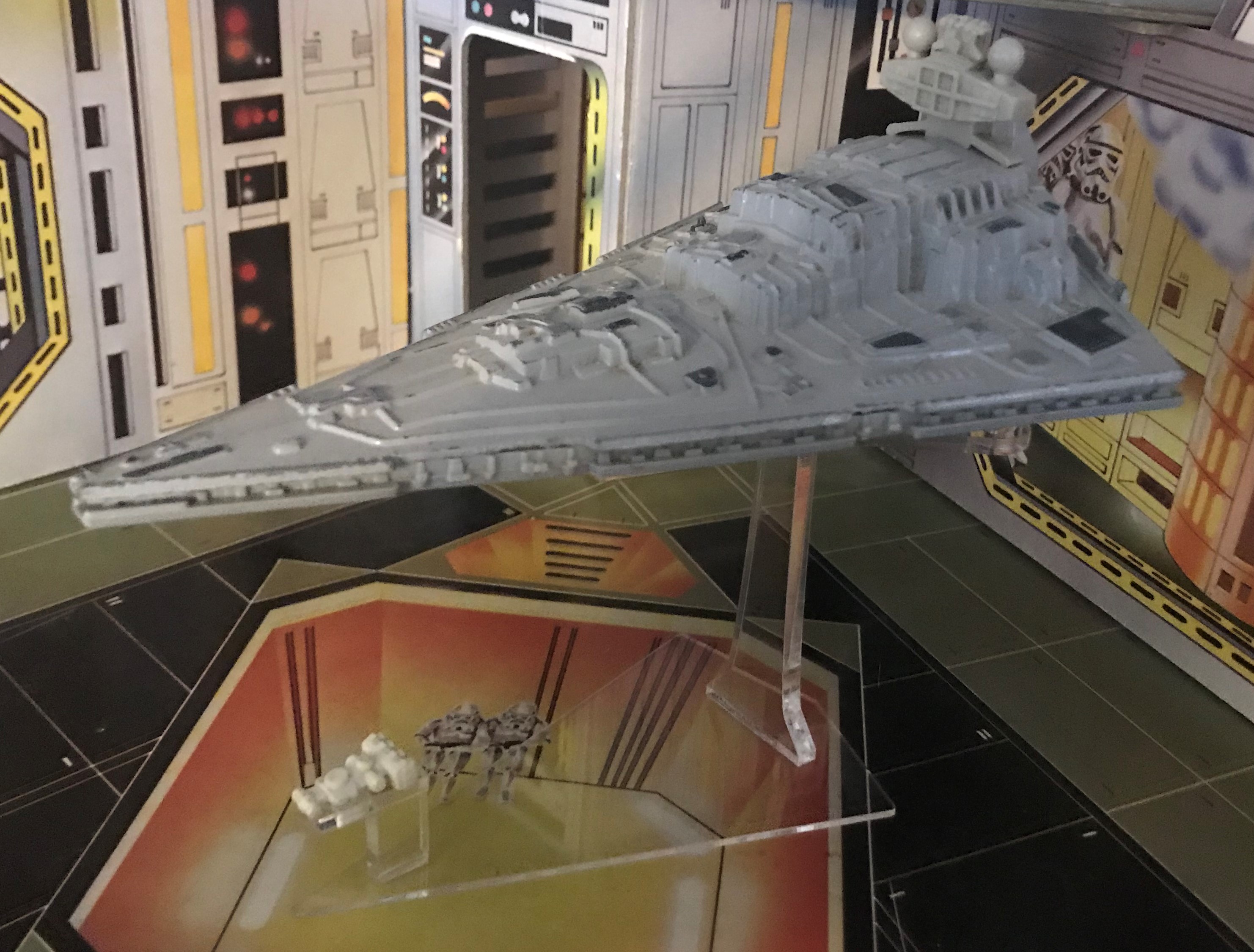 My first ship is the Imperial Cruiser, but look closely at the bottom.  You can see the Tantive IV, usually hidden in the hanger of the Star Destroyer, positioned on a slot in the plastic frame in an approximation of the opening scene to Star Wars.

The base is wide to ensure that the ship is stable. 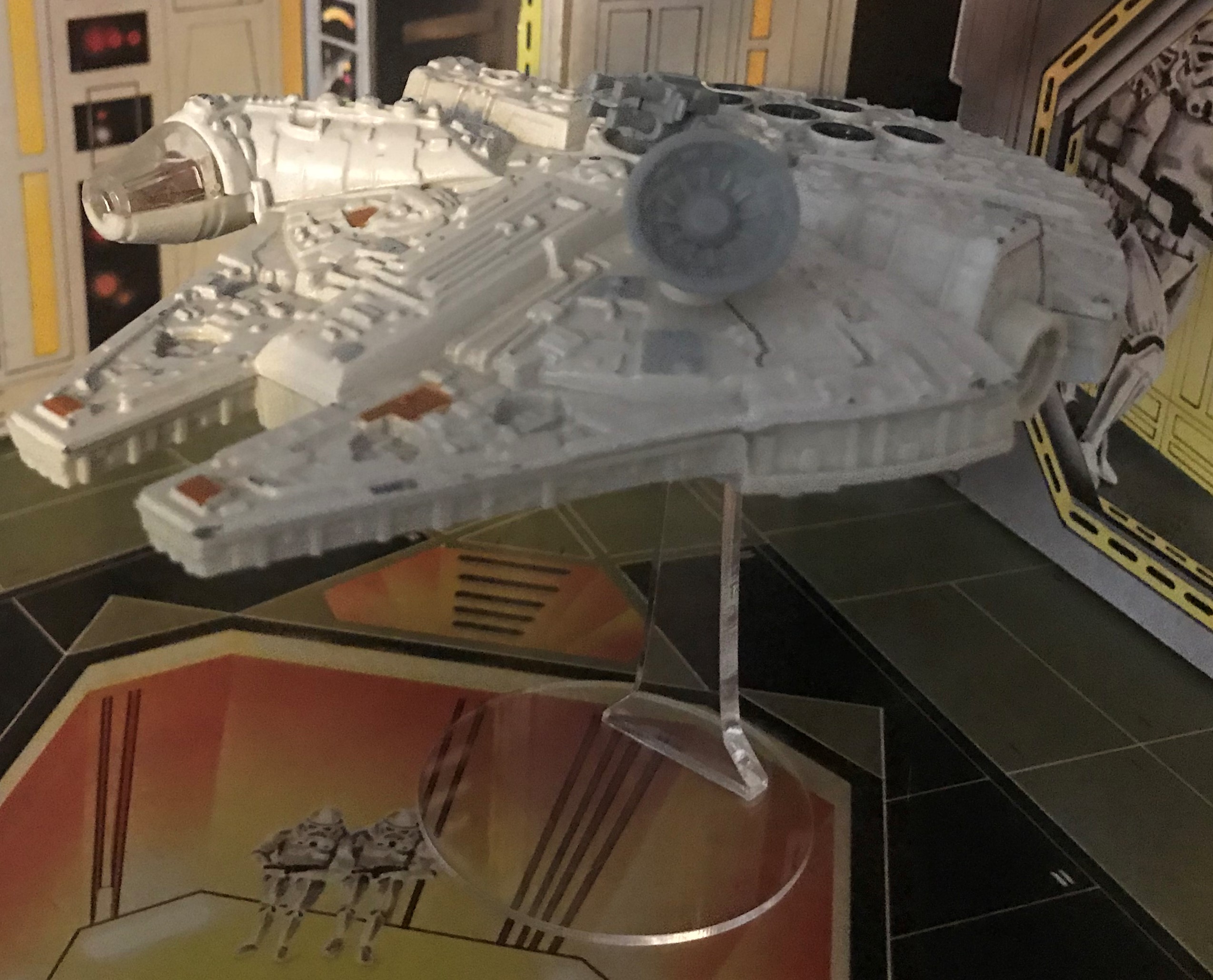 The Millennium Falcon is pretty stable as is so you may wonder why it needs a stand.  Well, it’s the only way to get a good look at the ship, not only do you get a good view of the sides but also the underbelly of our favourite vehicle including its retractable landing gear.

The TIE Fighters here, yes I know Darth Vader’s TIE is upside down, benefit from the stands as mentioned above by removing the stress from the wing brackets.  The TIE Fighter has large hooks which clearly holds the wings adjacent to the base in the vertical position. 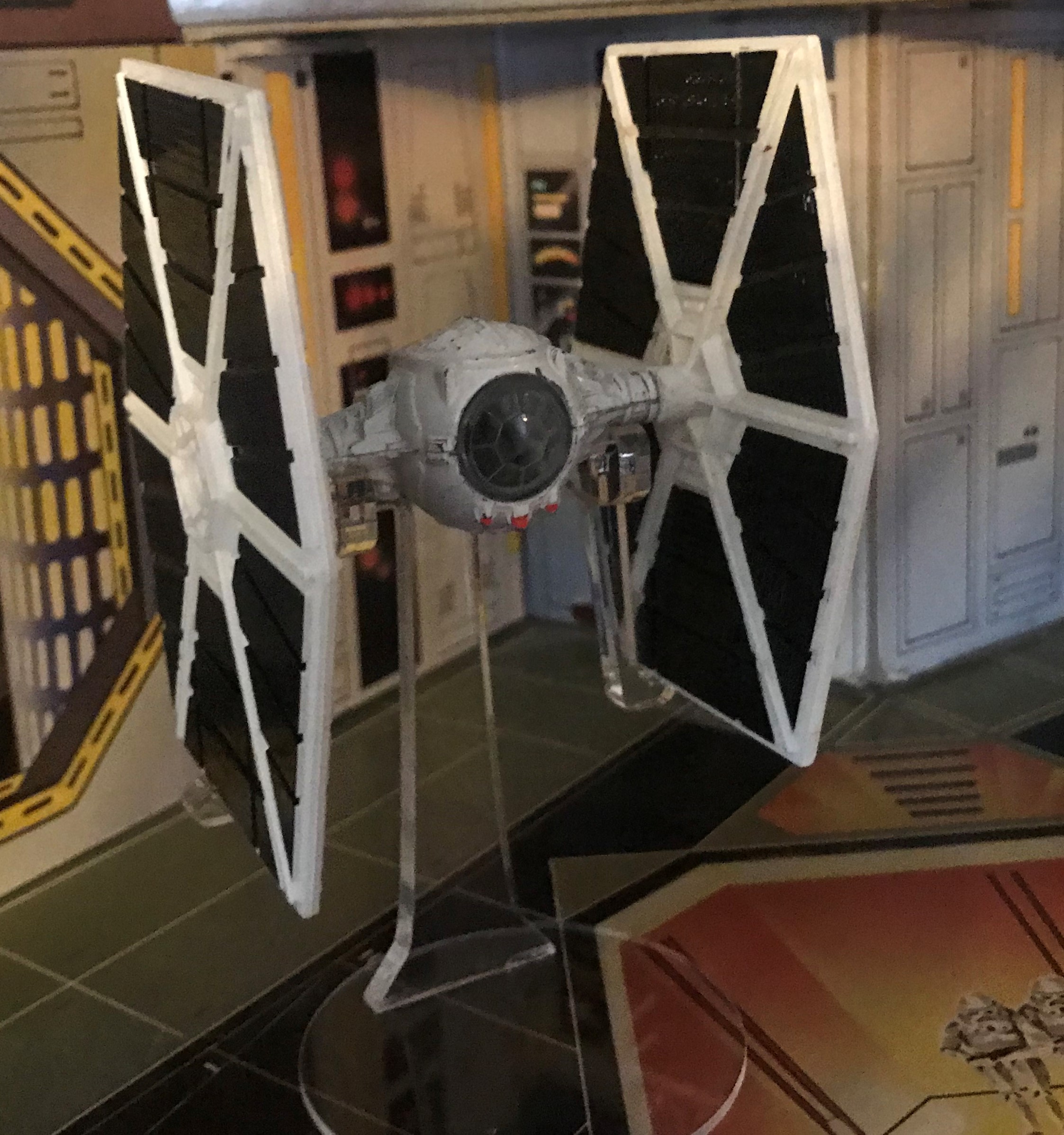 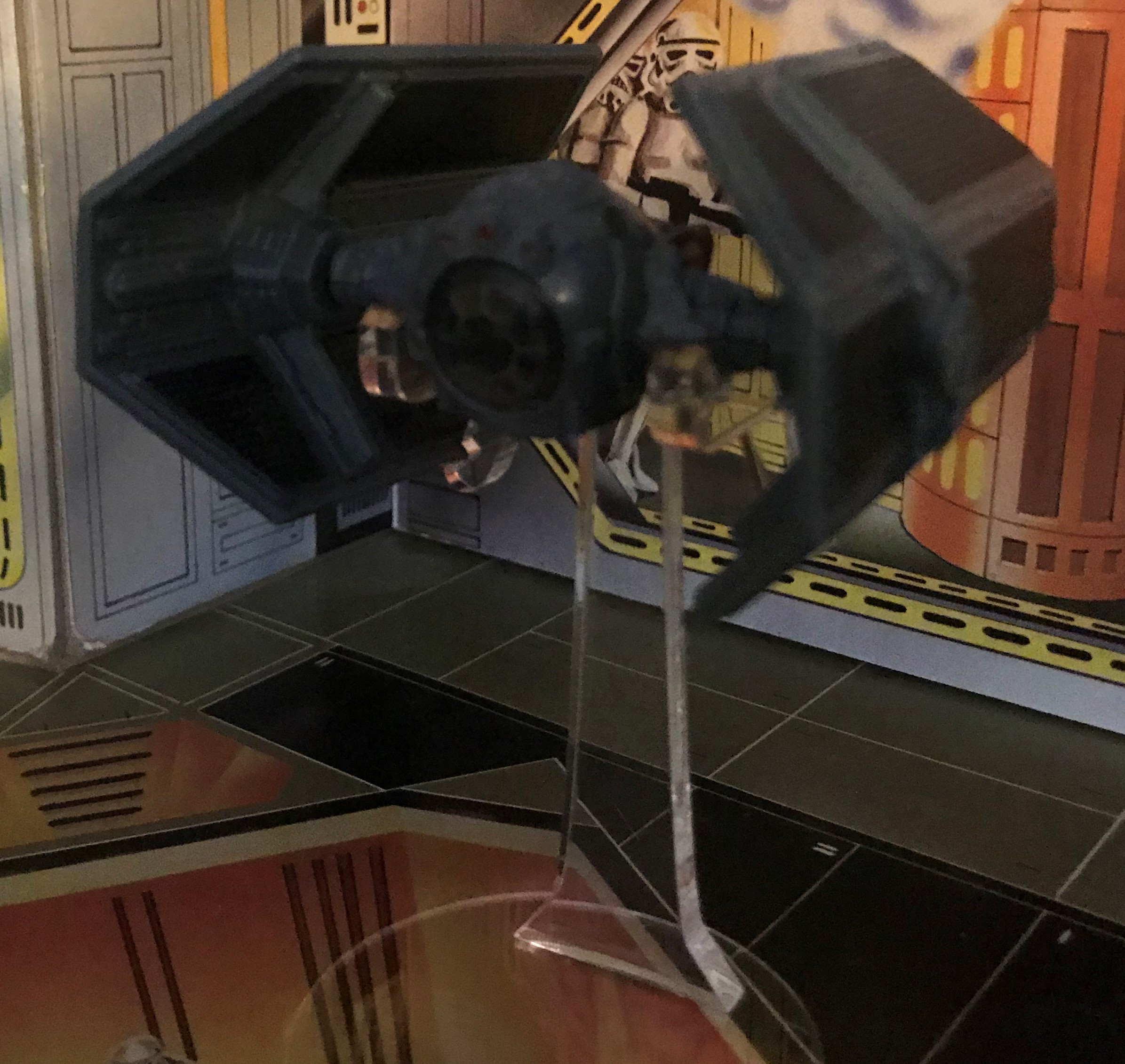 The most worrying of all for display is the Tie Bomber.  Costing more than all of the other vehicles added together and more, it’s a worry that the weight of the body seems to push down on the small clips on the wing brackets.  I’ve seen many examples where the vehicles sag in the middle with the wings bending inwards.  This unique design also keeps the wings in perfect condition. 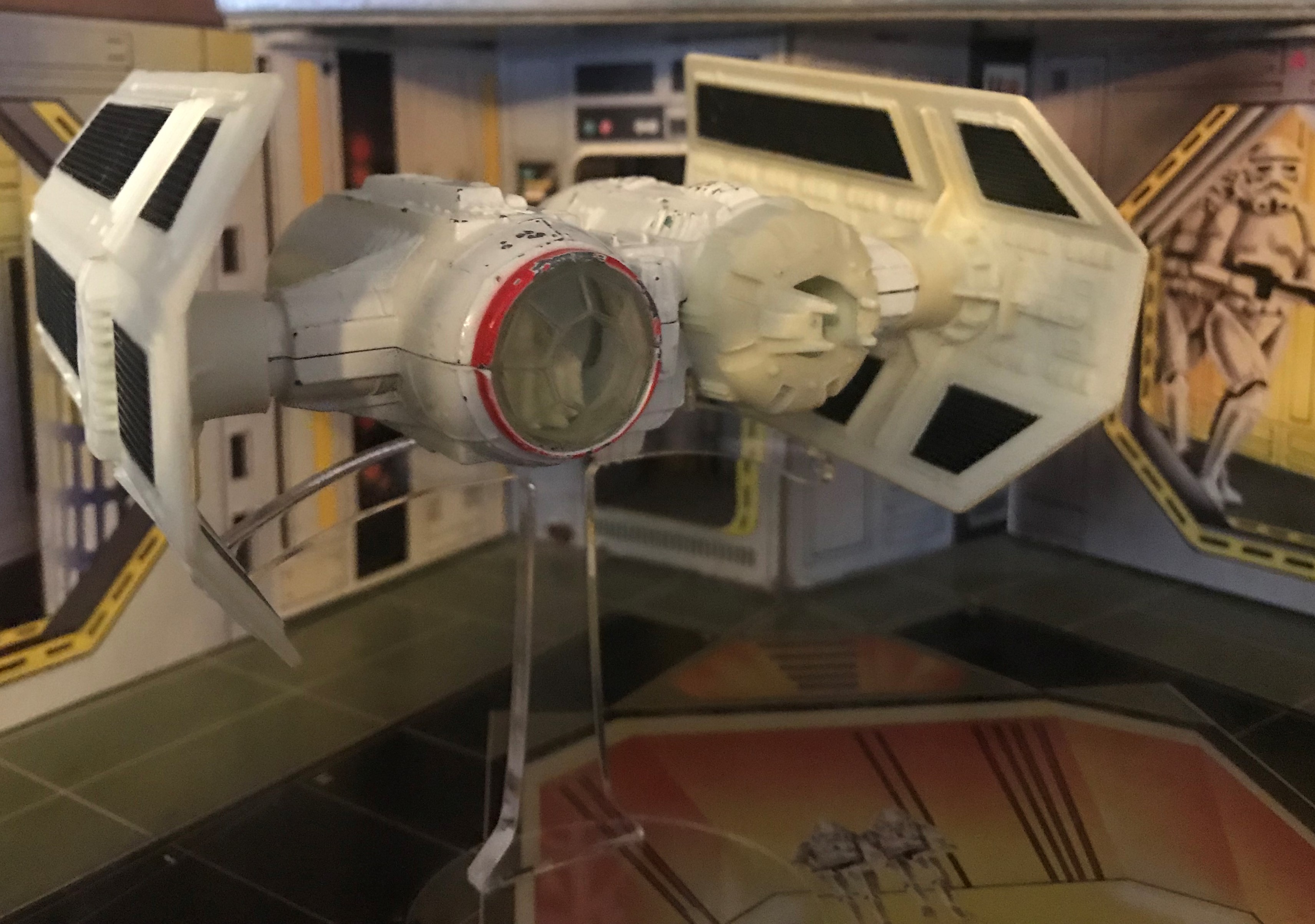 Now onto the ships where I’m taking a little bit of poetic license; hey, if the EU can do it then so can I! The Cloud Car and X-Wing again display very well on stable stands. I particularly like how the X-Wings stay in their attack position! 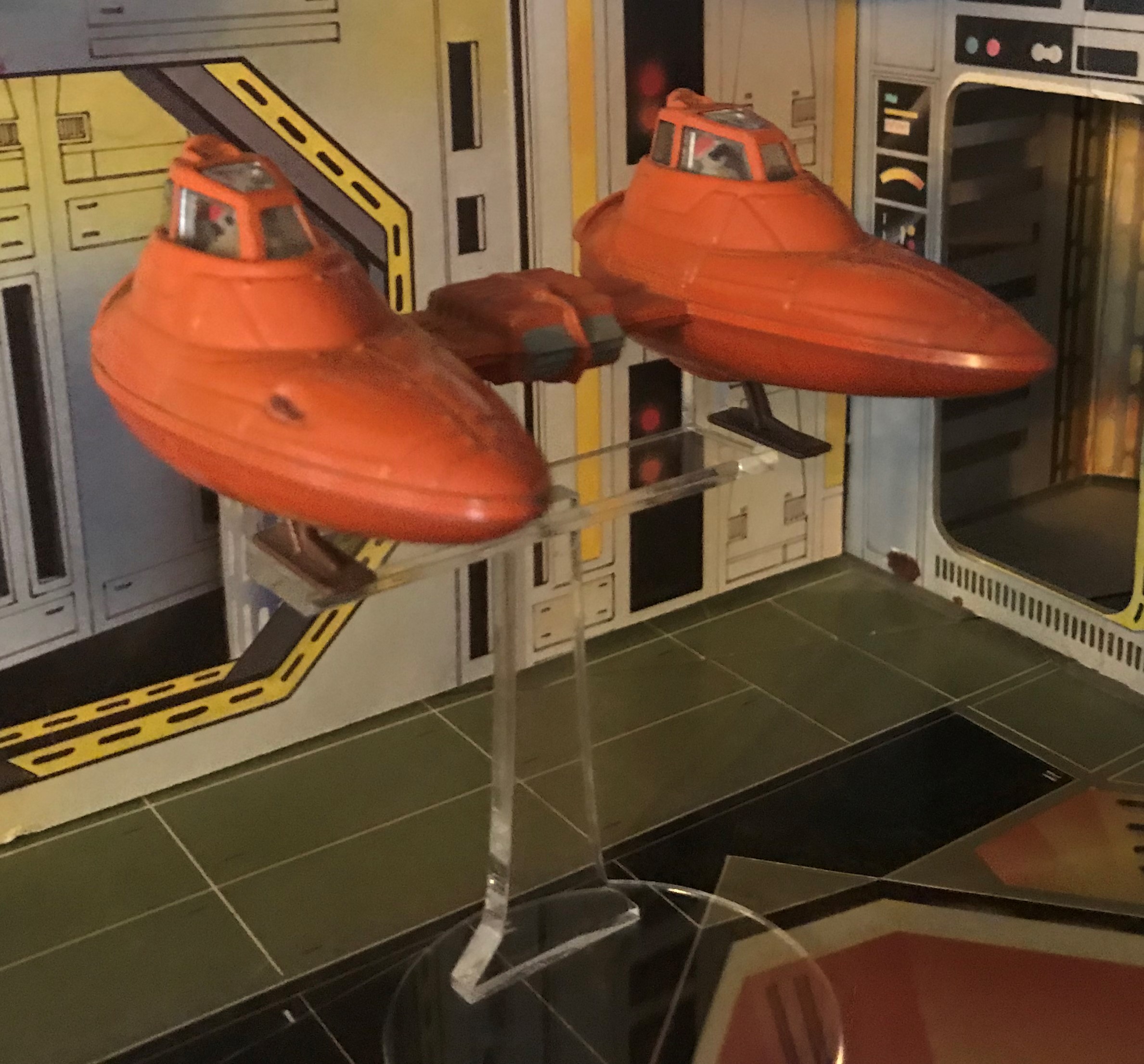 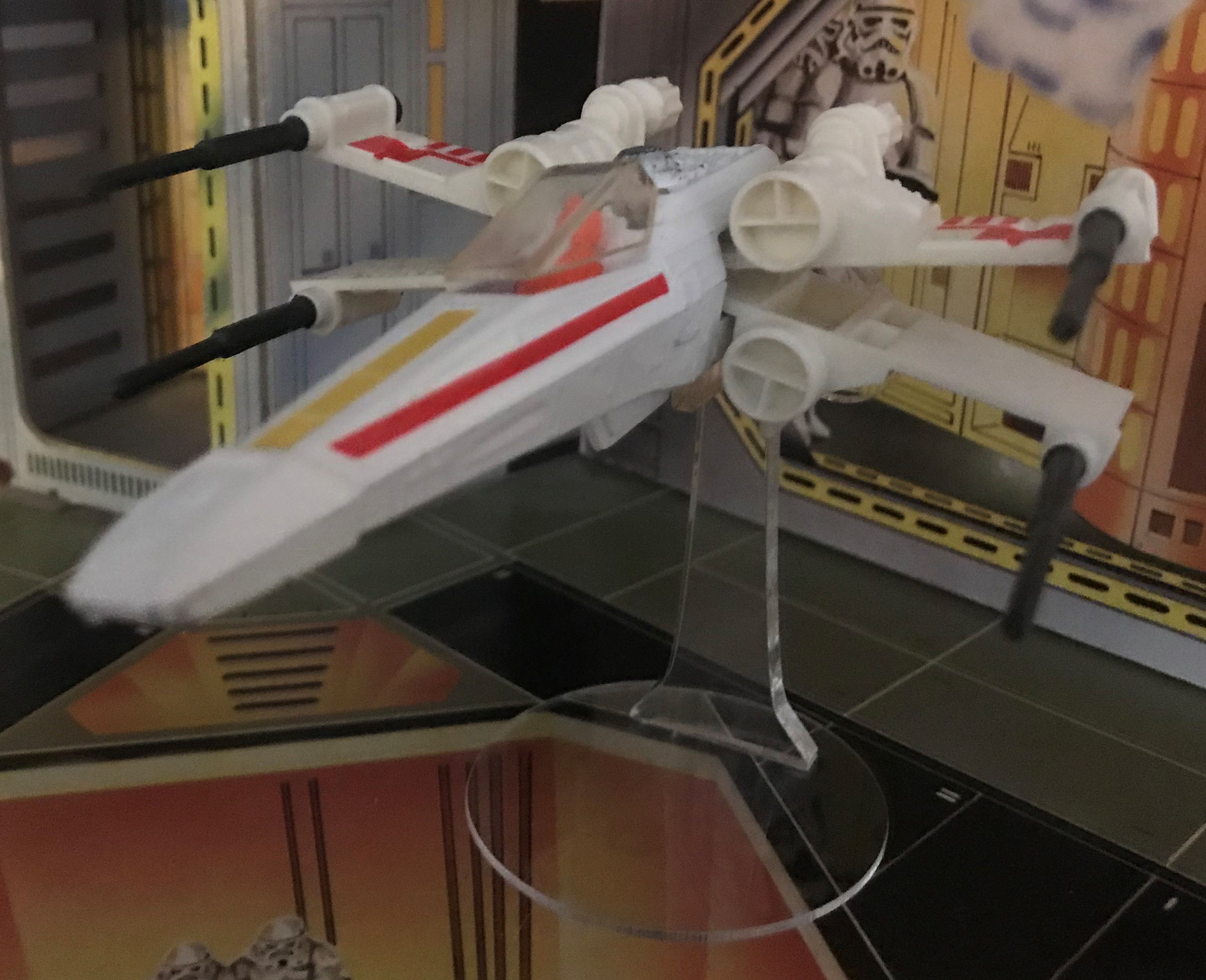 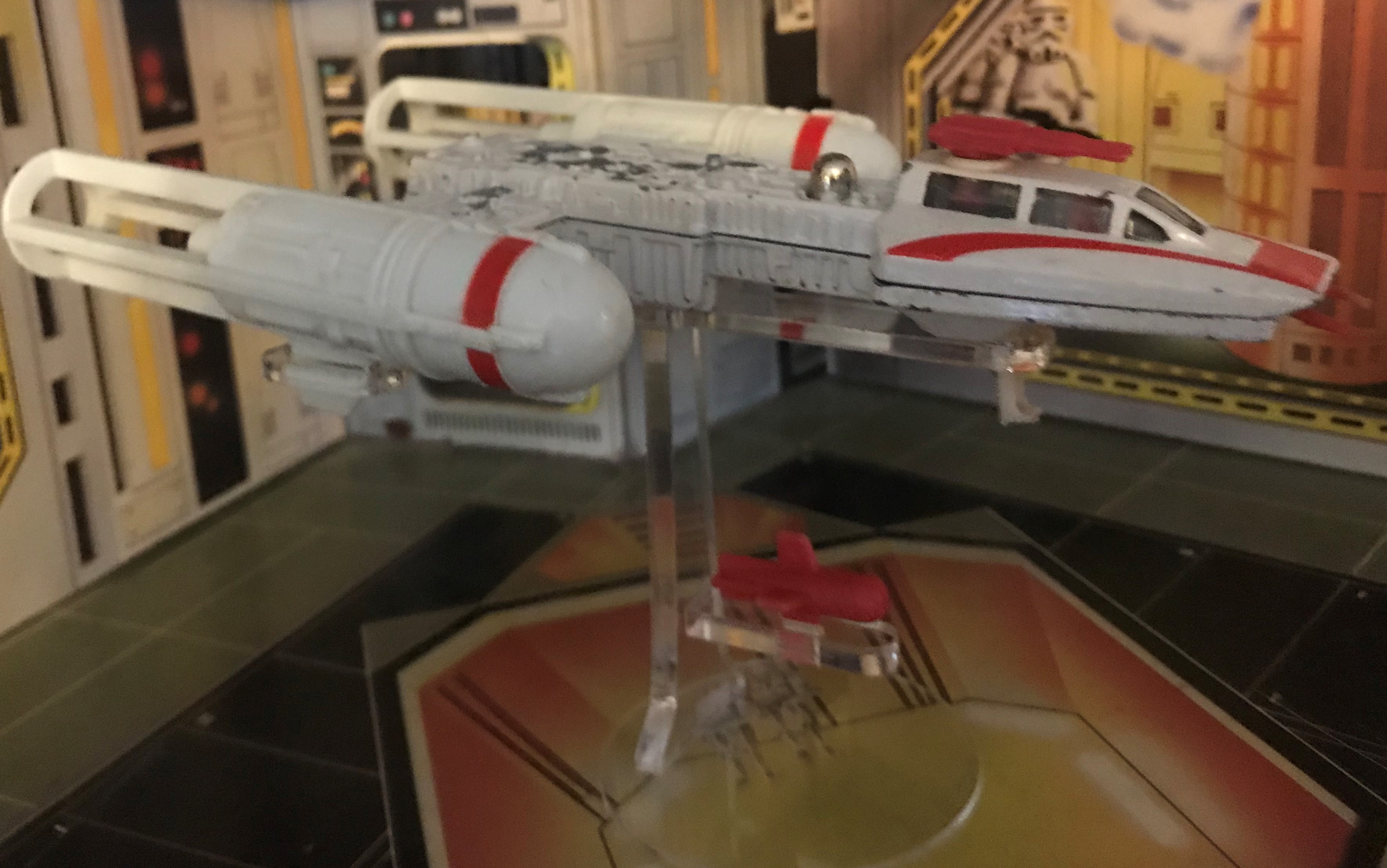 Similar to the Imperial Cruiser, the Y-Wing has a detachable accessory in this case in the form of an easily lost red bomb.

Iain has taken this into account and displays the bomb on its own, as if it has been dropped onto an Imperial base. 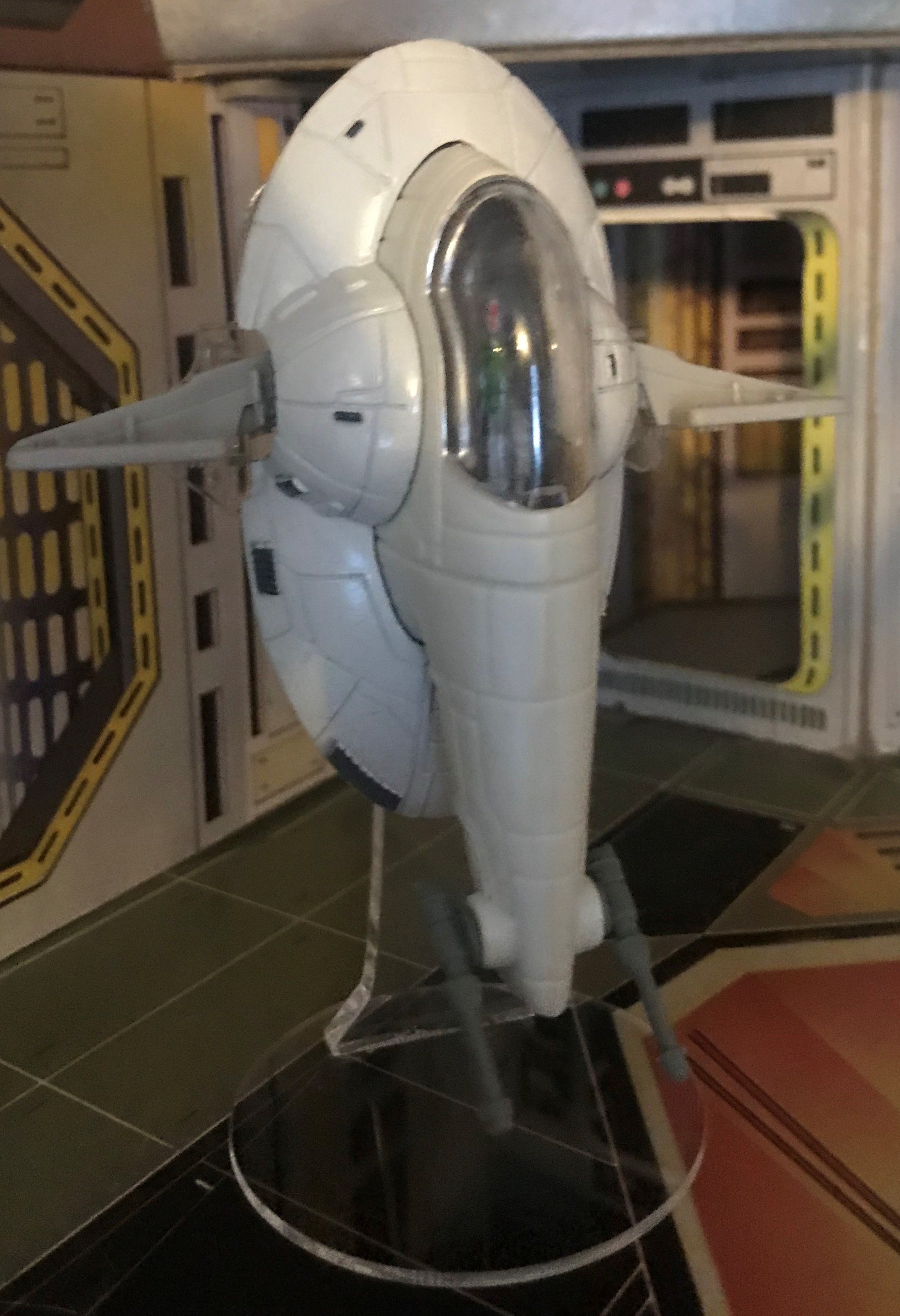 The Slave One is always a struggle to display and Iain displays this one in the way it was always meant to, as a vertical ship so that Boba can be clearly seen.

The wings drop into flight position and the laser canons are raring to blast whatever gets in his way.

Finally, we come to the last but definitely not the least.  Similar to the Falcon the Snowspeeder and Landspeeder are displayed higher to give a good view of the underbelly.  Both are very stable – I’ve even seen displays where the Snowspeeder is paired with an AT-AT to simulate a mock battle. 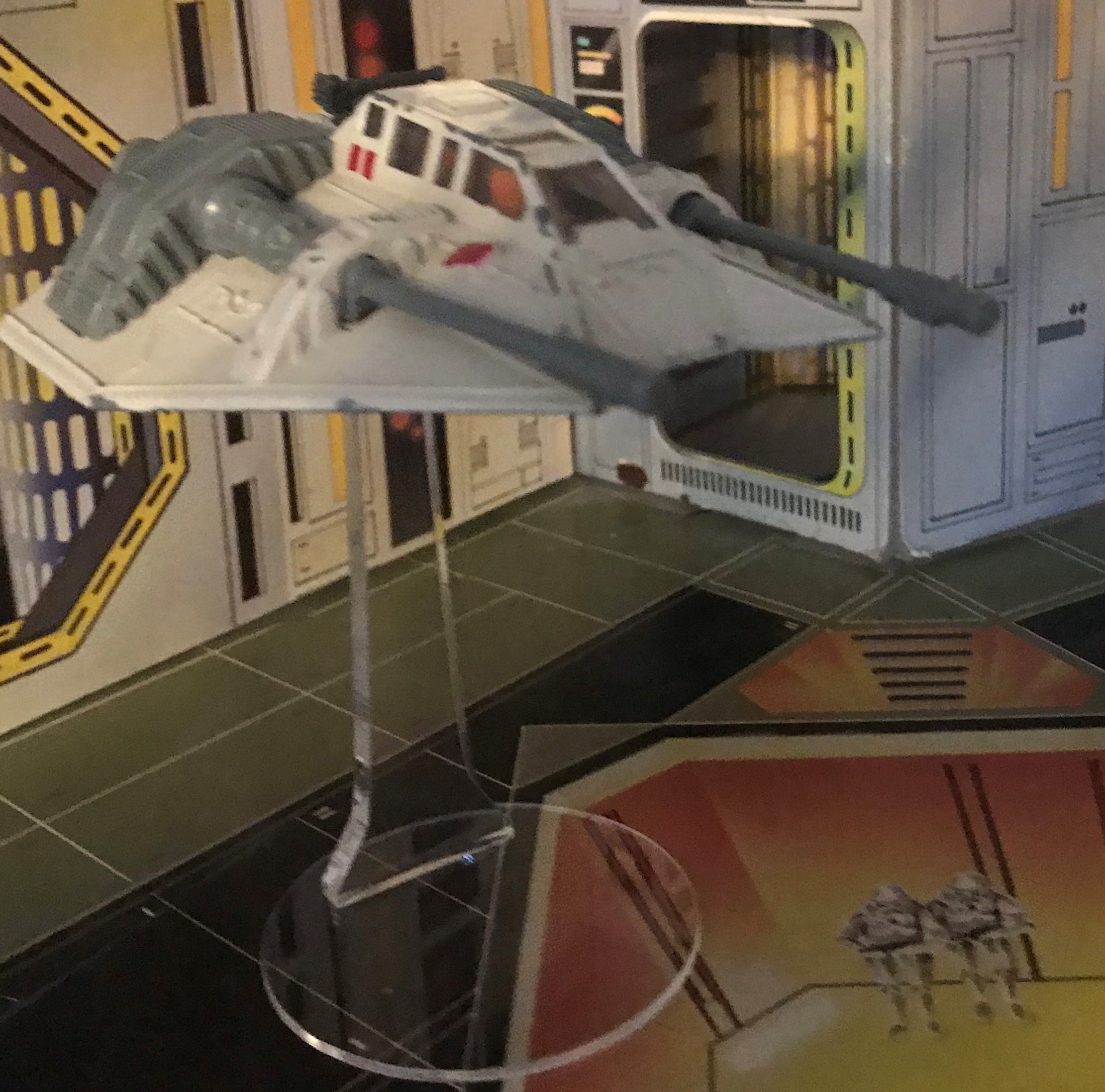 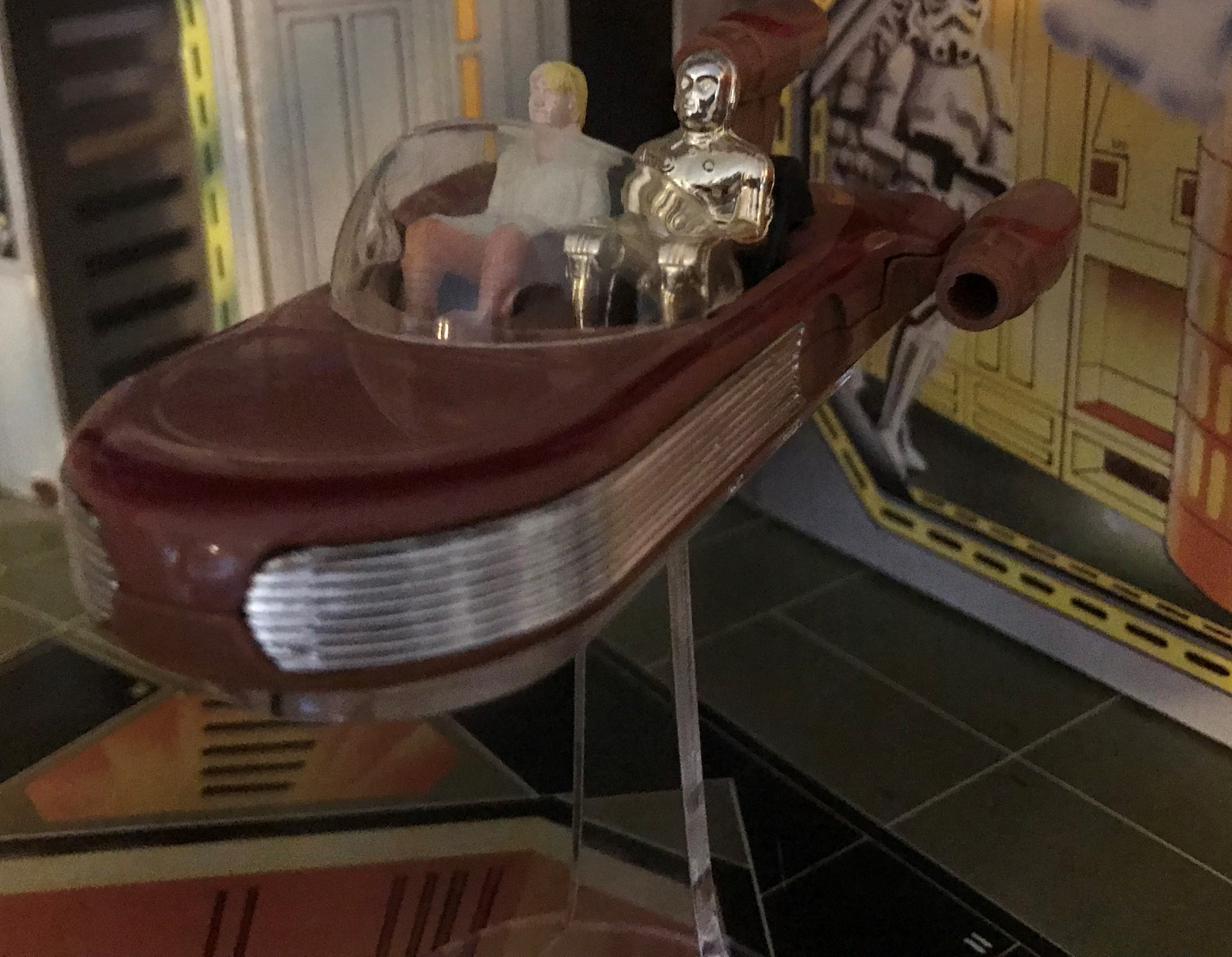 I’ve purchased Iain’s products for many years, especially the loose figure display stands which come in a range of sizes for a range of runs including the varying peg holes found in the Black Series figures.  Many of his products feature etching such as the first 12 display stand.

Iain is easily found on Facebook, or from his ebay store, and at events and cons in the USA including Celebration.  He has distribution locations throughout the world including USA, UK and Australia.  You’ll not regret your first purchase.