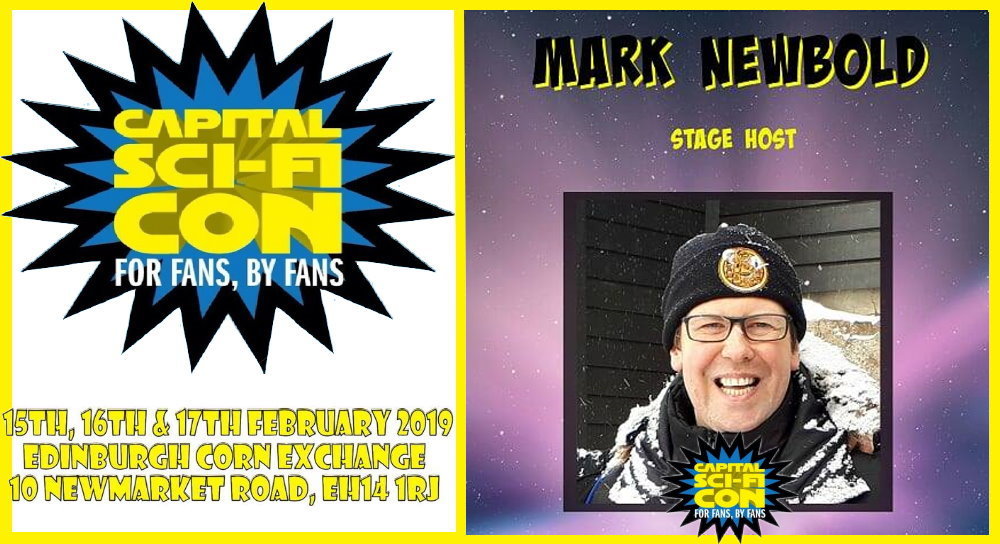 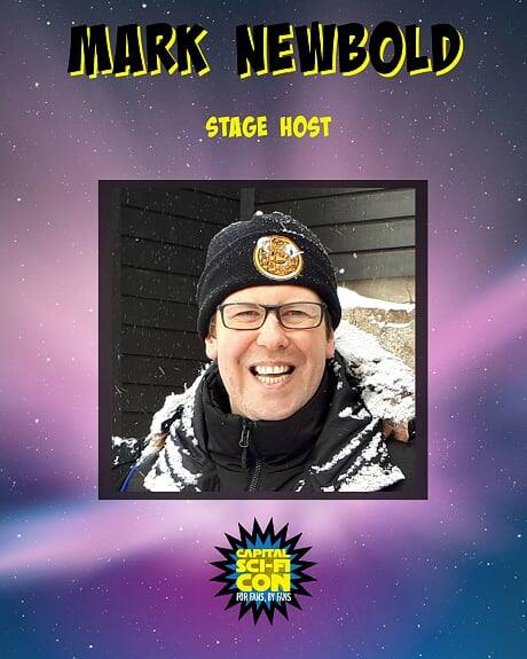 Tonight, we are pleased to announce our first Stage Host for Capital Sci fi Con 2019!

Mark’s Star Wars journey started at the Cannock ABC cinema back in early 1978 and through weekly Marvel UK Comics, Read-Along-Adventures, Palitoy figures and his imagination he’s continued on the Jedi Path for four decades. In 1982 he wrote his first Star Wars fiction, the short story Quest For Freedom. That spawned the creation alongside Jonathan Hicks of the Setnin sector through 17 audio stories recorded between 1985 and 1987 and almost 200 short stories, novellas and novels.

In 1998, after four years online with a variety of sci-fi sites including The Q-Continuum and FantaWar, Mark and Louis Turfrey launched Wirezone, which changed its name and URL to become lightsabre.co.uk on Monday 28th June 1999. During his decade running Lightsabre he conducted well over 140 interviews and co-hosted 17 episodes of the Setnin Radio podcast during 2005 and 2006.

On Tuesday 31st October 2017, Mark – along with Matt Booker, Brian Cameron and Dave Tree – launched Fantha Tracks, where he serves as co-owner and Editor-in-Chief of the website. Mark is also the host of Making Tracks alongside co-host Dave Tree on Fantha Tracks Radio.

Marks first contributed to the Star Wars Insider magazine in issue 90 in September 2006. His tenure has included overseeing both Red Five and My Star Wars! features and contributing to Launch Pad as well as providing interviews and cover articles.

He has also written canonical material for DeAgostini’s Build The Millennium Falcon partworks magazine. From November 2016 to March 2017 he wrote for Geeky Monkey magazine and in March 2017 had his first article published in issue #187 of Star Trek The Official Magazine. Mark also contributes to StarTrek.com.

Mark is also a Lead Writer for the world’s longest running sci-fi magazine Starburst and has had a number of cover articles including issue 440, the 40th anniversary issue.

Quotes from Marks interviews were also published in J.W. Rinzler’s 2009 release The Making Of Return Of The Jedi, and is mentioned in the bibliography. He was also featured in Jonathan Bowen’s 2007 book Revenge, looking at the build up and reception of Attack of the Clones and Revenge of the Sith, the 2009 5th edition of Geoffrey T. Carlton’s Star Wars Super Collector’s Wish Book and Craig Stevens 2018 book The Star Wars Phenomenon in Britain.

On television he has appeared on BBC News 24, BBC Breakfast News, BBC Talking Movies, Big Centre TV‘s Brummywood Yammywood, Made In Birmingham’s The Lowdown and The Week and Channel 5’s How Star Wars Changed The World as well as the Sky One quiz show The Fanatics, winning the episode on his chosen subject the Star Wars saga. He also appeared on The Weakest Link on BBC 2 and Don’t Sit In The Front Row on Sky One.

Mark is set to appear as a Stage host at Star Wars Celebration in Chicago.

Mark is joined by DJ Elliot and guests Mike Quinn, Warwick Davis, Jerome Blake, Chris Parsons, Kiran Shah, Katy Kartwheel, Aidan Cook and Lewis Macleod. Fantha Tracks are there covering the show, so be sure to say hi when you see us on the show floor.