STAR WARS NEWS IN A SINGLE FILE
Search
Home News Collecting Vintage Vault: Mail the Force be with you 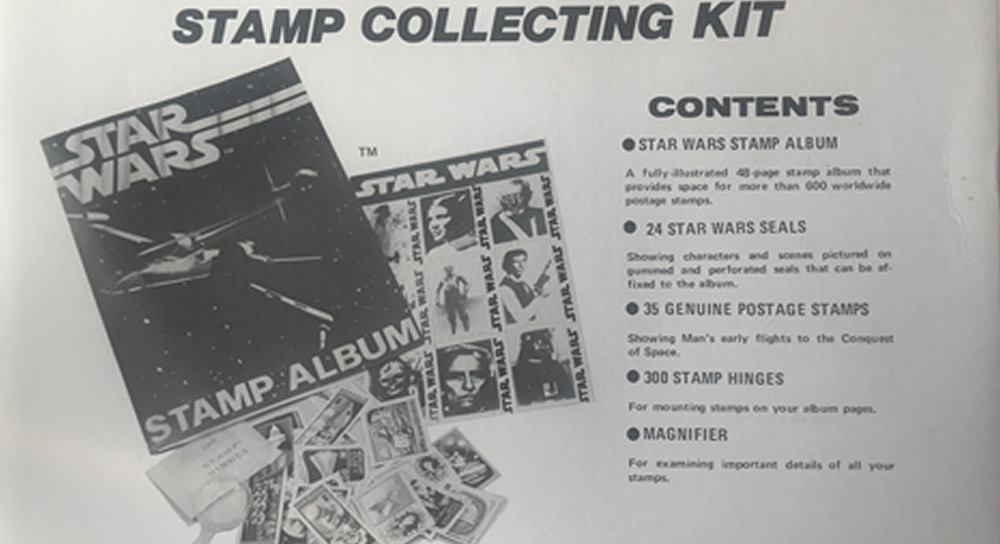 The name H.E. Harris should be well known throughout the United States, belonging as it does to the famous philatelist Henry Ellis Harris who popularised the study and collecting of stamps primarily through mail order sets in the 1960’s and 70’s.

In 1975, American conglomerate General Mills – then the owner of Kenner Toys – purchased the company and it’s this acquisition which would be largely responsible for the Star Wars stamp kit which came in 1977. 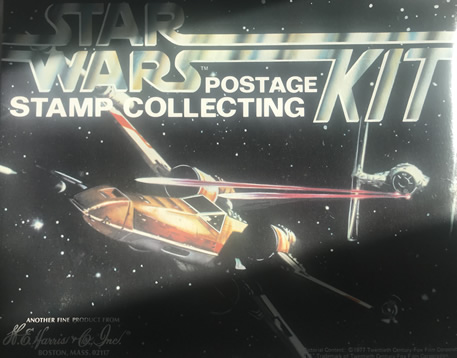 There are a few different versions of the kit, ans well as a store display to hunt down, but as far as I’m aware the kit contents are all the same. The kit comes in a box measuring approximately 9″ x 11 1/2″ featuring an iconic shot of a TIE Fighter chasing an X-Wing fighter. 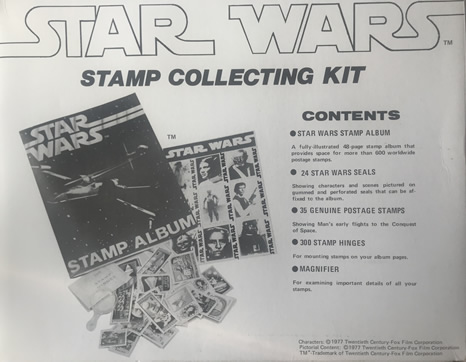 The contents are listed on the back as: 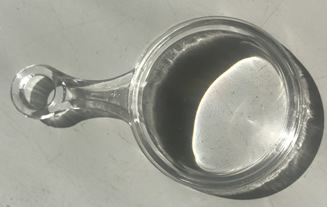 Starting with the least interesting of the contents we have the magnifier for “examining important details of all your stamps.” 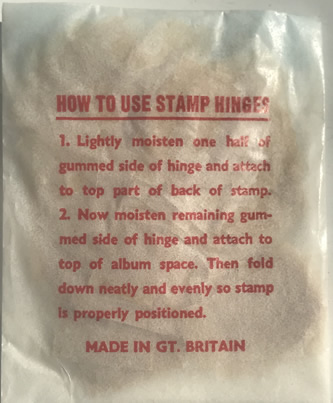 Next we have a sealed bag of stamp hinges. I had no idea what a stamp hinge is but I now understand it to be a small piece of folded gummed paper which is used to affix a stamp to an album in such a way that the back of a stamp is also visible. Ingenious really.

Not included in the contents is a reply form for the stamp enthusiast to send off for an “indispensable stamp finder” guide. It’s ironic that there is no stamp on the other side of the form, although H.E. Harris Inc, proudly state that they will pay the postage if mailed in the US. 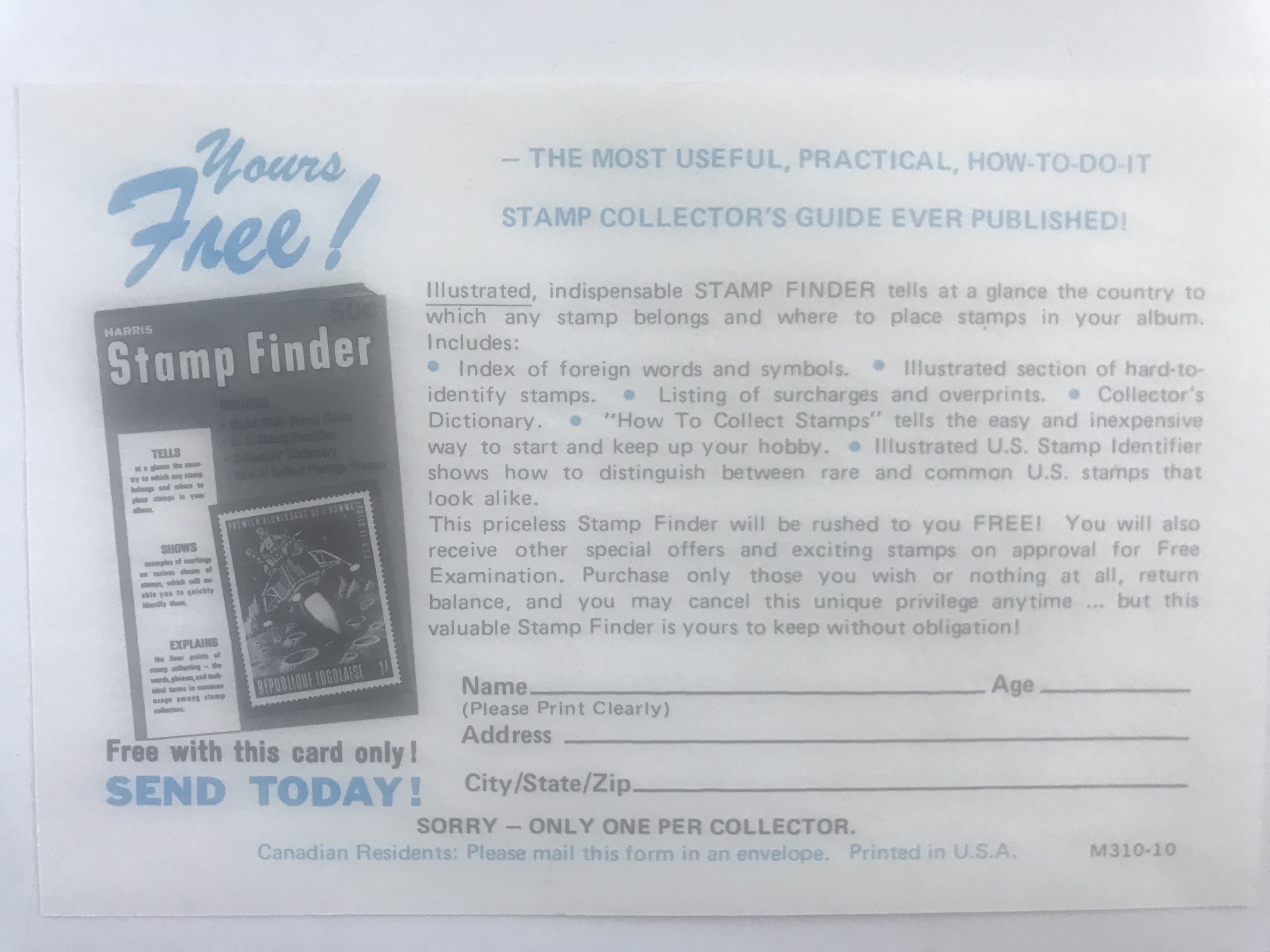 A flyer for mail order stamp sets to complete the album with some great stamps relating to Space and Astronomy. 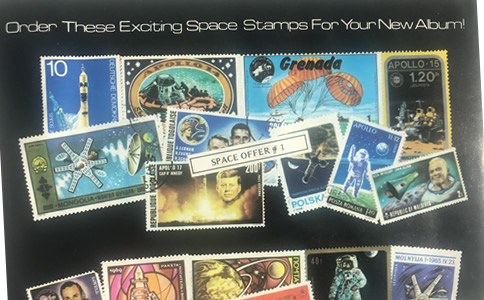 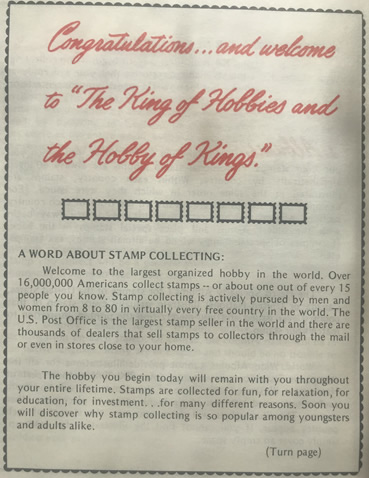 And a welcome leaflet welcoming me to “The King of Hobbies and the Hobby of Kings.”  Did you know that 16 million Americans actively collected stamps?

On the reverse of the leaflet I’m glad it tells me not to worry about making mistakes.  Phew.

The 24 Star Wars seals – not stamps apparently.  Although they look like stamps, according to my guide “every country, with the exception of Great Britain, prints their name and identification on each stamp.”  Well, in Great Britain we don’t need to see your identification and Great Britain isn’t even a country, but we’re not to worry about making mistakes. 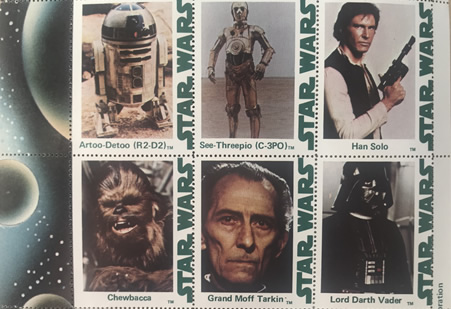 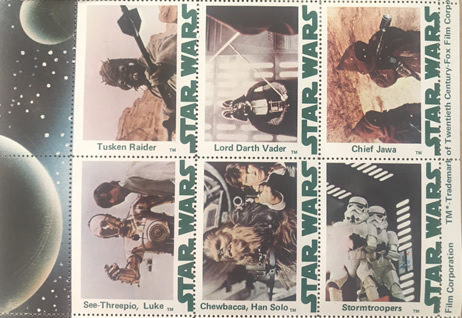 You can tell that these images are very early and I’m delighted that some of these are the source of the cardbacks!  Look at Darth Vader in particular with his lightsaber. 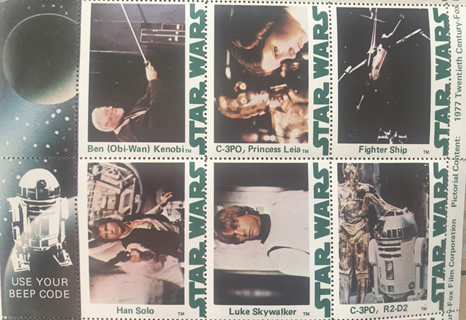 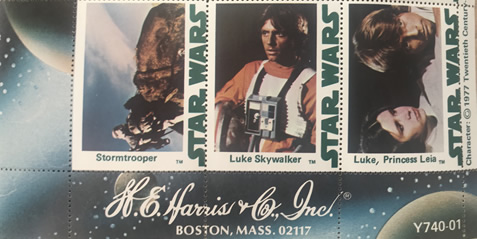 The purpose of a seal is to ensure the envelope is sealed close, a nod to the days when wax was used to seal official documents.  Which it probably is done still. 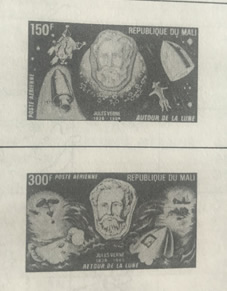 The stamp album itself would be a little disappointing to a Star Wars fan who was not interested in Space exploration. There are close to 50 pages for you to stick (hinge?) your stamps and in the pack are 35 to get you started.

Full of great facts about our Solar System, astronauts and Space voyages from multiple countries I would have loved this as a kid.  Have to say I would have never put a stamp in it though.

There are 35 stamps in a sealed bag, and there they shall remain.  Knowing my luck there’s a Penny Black in there! 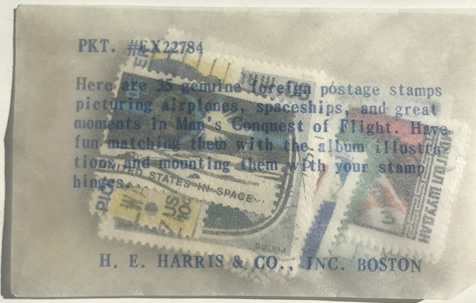 Star Wars: The Rise of Skywalker
$18.99
Buy on Amazon This is a paid link. Learn More. Clicking the link may take you to the Amazon store servicing your country Price incl. tax, excl. shipping.  Details correct as at: 2021-06-16
Bestseller No. 5

Star Wars: The Skywalker Saga 9-Movie Collection + Bonus
$71.91
Buy on Amazon This is a paid link. Learn More. Clicking the link may take you to the Amazon store servicing your country Price incl. tax, excl. shipping.  Details correct as at: 2021-06-16
SaleBestseller No. 6