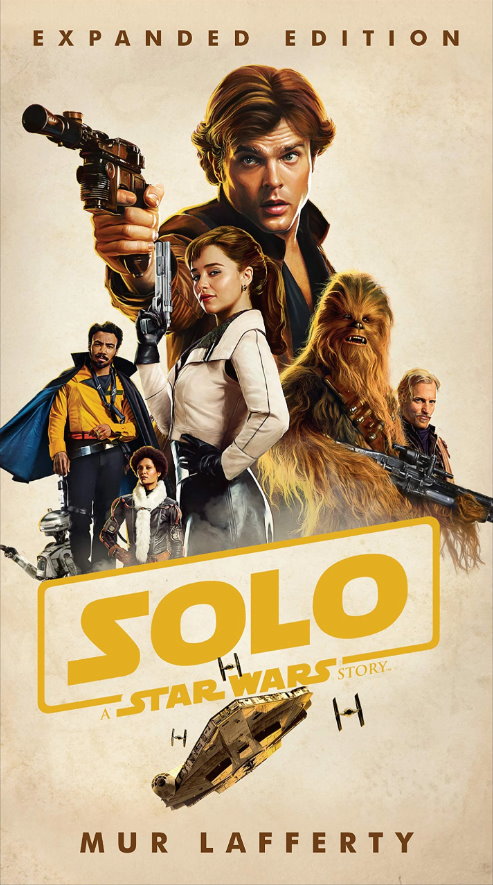 Don’t miss the exclusive content in this thrilling adaptation of Solo: A Star Wars Story, with scenes from alternate versions of the script including Han Solo’s time in the Imperial Navy, Qi’ra’s past, the beginnings of the rebellion, and more!

Though Han Solo has thrilled Star Wars fans for decades, the notorious wisecracking scoundrel was chasing adventure and dodging trouble long before he walked into the cantina at Mos Eisley spaceport.

Young Han dreams of someday soaring into space at the helm of his own starship and leaving his home, the gritty industrial planet Corellia, far behind. But as long as he’s trapped in a life of poverty and crime—and under the thumb of the sinister Lady Proxima and her brutal street gang—reaching the distant stars seems impossible. When Han tries to escape with his girlfriend and partner-in-crime, Qi’ra, he makes it out—but she doesn’t. Desperate for a way to find his own offworld vessel and free her, Han enlists in the Imperial Navy—the last place for a rebellious loner who doesn’t play well with others.

When the Empire clips his wings, Han goes rogue and plunges into the shady world of smugglers, gamblers, and con artists. There he meets the charming and cunning high roller Lando Calrissian, makes an unlikely friend in a cantankerous Wookiee called Chewbacca, and first lays eyes on the Millennium Falcon. To snag his piece of the outlaw pie, Han joins a crew of pirates to pull off a risky heist. The stakes are high, the danger is great, and the odds are slim. But never tell Han Solo the odds.

Movie novelisations can be strange beasts. For every straight up retread of a film there are some unexpected gems. Terry Brooks’ 1999 adaptation of The Phantom Menace added extra scenes and moments to the first prequel, while Matthew Stovers supremely engrossing 2005 adaptation of Revenge of the Sith gave us the story of the film from individual perspectives that added to the movie experience. Mur Lafferty was tasked with not only adapting Solo: A Star Wars Story into a novel, but also with enhancing the story for this expanded edition, and boy, did she succeed.

If you’ve seen the film – and if not, why not? – then you know the structure of the story. A young, hungry Han and his partner in petty crime Qi’ra struggle to survive on the cold-steel streets of Corellia before fate tears them apart, sending Han (now known as Han Solo) into the military and a determination to return to Corellia to get his lost love back while she works her way up the ranks of a galactic criminal organisation. It’s here in these early scenes that we learn not only just how harsh those mean streets are, and how the Corellian underworld can suck a young husk dry.

In later scenes we learn how brutal Qi’ra’s time away from Han was. We know Han is a pragmatist and a survivor, but the journey Qi’ra took was every bit as tough. Her determination to survive is tangible, and her hatred for Dryden Voss far more evident in the novel than it appears in the film, one of the many ways where the book enhances the plot.

Ron Howard’s romp is a breezy blast through the early years of Han and Chewie’s partnership, and you could be forgiven for expecting the book to be the same but Lafferty bravely refuses to steer away from showing the horrors of young lives without any trace of privilege. It’s dirty, grimy, desperate and grim, but when Han is in the frame it radiates that easy charm – rough at the edges but inherently Solo – that we know so well. We see how he fared in the Imperial navy in Onyx Squadron, his piloting skills evident but respect or lack thereof for authority as clear as ever (even when Tag and Binks are present). We even learn that Chewie uses conditioner, and who ever thought we’d learn that?

The book unfurls paragraphs here and mentions there that layer on extra elements of information that only give, never diminish. Qi’ra and L3-37 have an extended version of their movie conversation which sees Qi’ra flashing back to her Corellia escape and sale to Dryden, the brutality of her ‘training’ and what she had been honed to do, something L3 clearly understands. “Dryden Vos’s cruelty is no secret; if you were high in his inner circle, he made you kill for him.” The scene allows the characters to reveal more about their past and gives us readers the chance to dip into their history while the characters ponder on the present and their futures. For example, what would Qi’ra do if her ‘restraining bolt’ were removed and she was able to leave Crimson Dawn?

And speaking of L3, we hear her internal thoughts as she integrates with the Millennium Falcon, the ship speaking gently, coaxing her as she struggles with the decision to give up her independence. It’s a short, sad but vital scene – without knowing it, we’ve been watching the actions of L3 aboard the Falcon for decades, and this is the very start of it.

Like the film that informs it, the novelisation is littered with regret, longing, lost hopes and roads not taken, but it also lays down clear paths to future events that we’re more than familiar with. The epilogue is the most striking example, a scene that when I read it I yelled out loud ‘Why didn’t they film this!‘ A young Jyn Erso, ward to the iconic Saw Gerrera, meeting the driven Enfys Nest. Nest sees the steel in young Jyn’s eyes – “He’s going to underestimate you.” – how true, and how deft to add this perfectly logical scene to the tail end of the book as the seeds of rebellion continue to congregate around the galaxy, paid for in large part by Han Solo efforts and charity.

To say much more would be to reveal too many of the filaments of coaxium that are laced through this novel, an easy read in the very best sense. We loved Han in the film, admired Lando’s flair and panache, appreciated Chewie’s loyalty and steadying influence, respected Qi’ra’s tenacity and drive and longed for more Beckett, Val and Rio adventures. The book does something that adaptations so rarely do – take a classic adventure (written by Lawrence Kasdan no less) and make it that bit better. Welcome to the galaxy Mur Lafferty.

“The book does something that adaptations so rarely do – take a classic adventure (written by Lawrence Kasdan no less) and make it that bit better. Welcome to the galaxy Mur Lafferty”
Fantha Tracks

“This is a novelisation that needs to be experienced, better yet to be felt.”
Phil Roberts in The Future of the Force

With thanks to Arrow for the free paperback review copy.

Solo: A Star Wars Story: Expanded Edition
$7.79
Buy on Amazon This is a paid link. Learn More. Clicking the link may take you to the Amazon store servicing your country Price incl. tax, excl. shipping.  Details correct as at: 2021-06-21

Emilia Clarke on a Solo: A Star Wars Story sequel: “I have heard nothing. Absolutely nothing”

Emilia Clarke talks Qi’ra: “An honor and a privilege to be part of that universe”