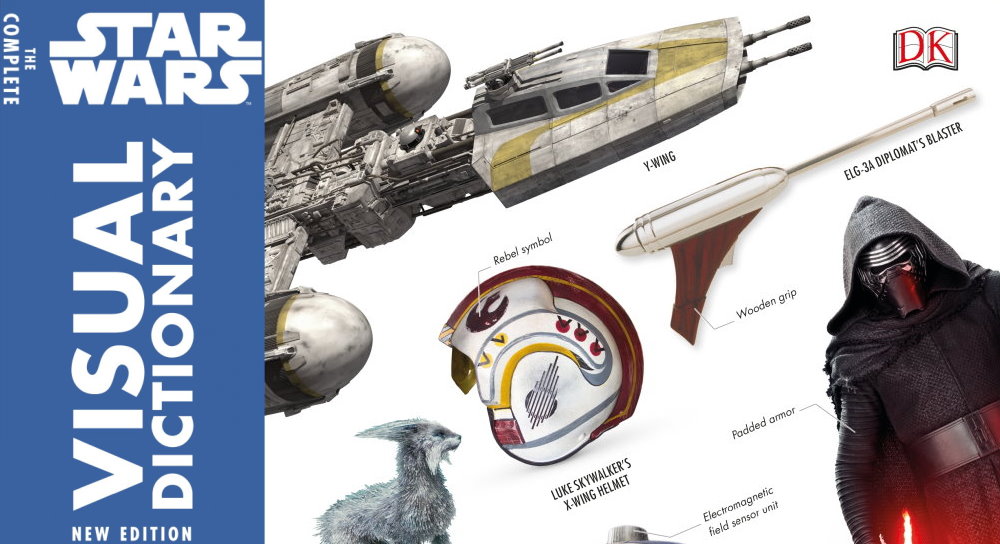 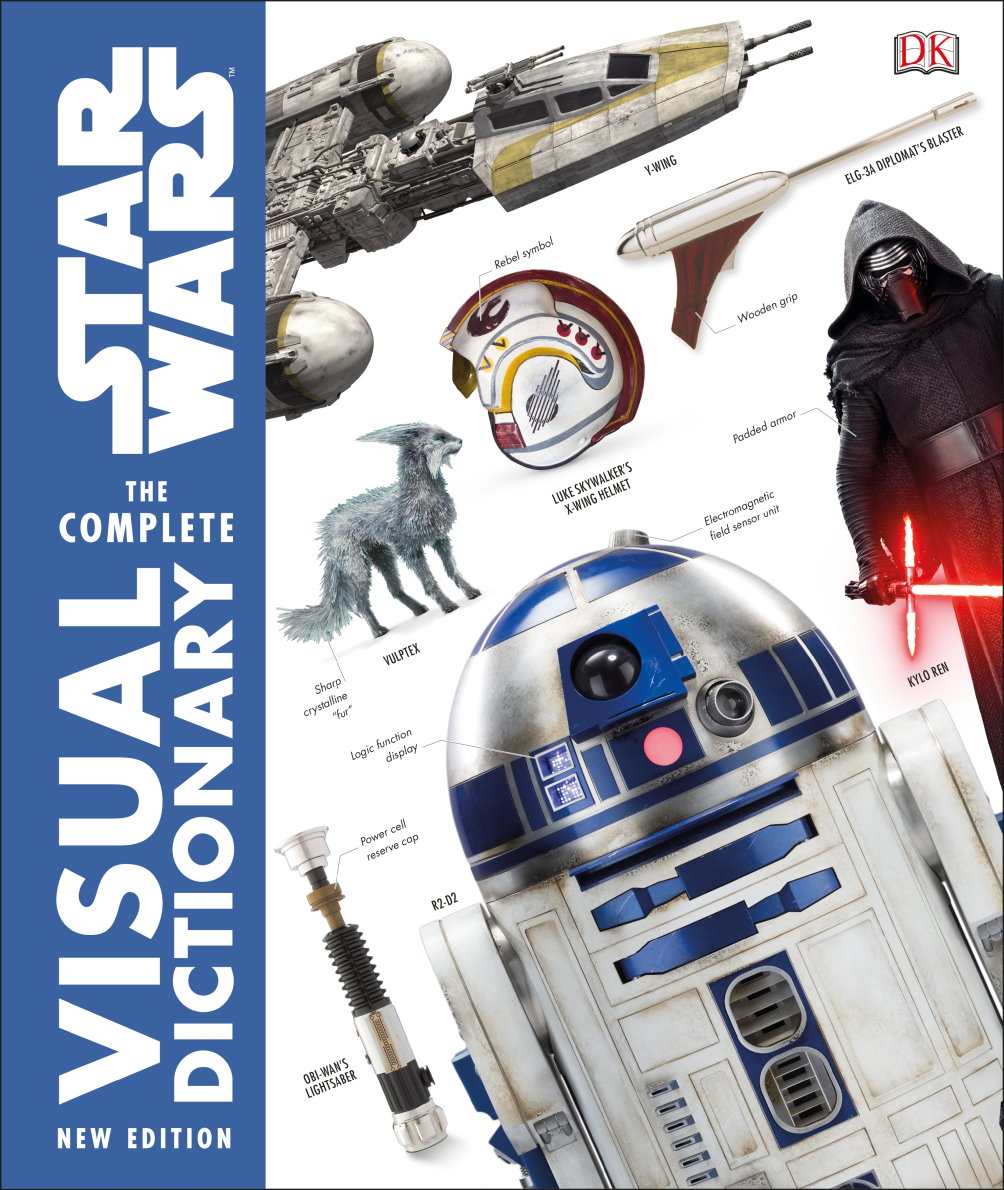 This comprehensive visual dictionary is the perfect Star Wars book for getting to know the galaxy far, far away.

Packed with more than 1,500 stunning images, it showcases major and minor characters (such as Princess Leia and Luke Skywalker), creatures, vehicles, weapons, props, and items of tech in unparalleled detail. Beautiful photography and engaging text written by Star Wars experts examines the finer points of Padmé Amidala’s costumes, displays Boba Fett’s array of weaponry, studies Darth Vader’s armor, and reveals the lesser-known background stories to many of the characters. Find out who Poe Dameron’s idol is, discover the tech behind BB-8’s rolling motion, and much, much more! Fully updated to include the latest installments of the Skywalker saga–Star Wars The Force Awakens and Star Wars The Last Jedi–this invaluable reference guide incorporates all the latest stories and characters. The definitive companion to the Star Wars movies, Star Wars The Complete Visual Dictionary is a must-buy for the beginner and the die-hard Star Wars fan alike.

When these “complete” Star Wars visual dictionaries come out, it’s easy to think they’re merely a compilation of the individual films’ Visual Dictionaries bound together. And that is certainly the foundation of this one since the writers aren’t starting from scratch, but care has been taken to update the descriptions and include new images. As tempting (but exhausting) as it is to get caught up in a side-by-side comparison between this, the previous Complete Visual Dictionary, and the individual film visual dictionaries, one should consider them but also take the current dictionary as its own entity.

The cover hints at the presentation and layout of the book’s content, with characters, creatures and objects with their respective labels. The largest, most centered image is of R2D2; to his right, a smaller Kylo Ren with saber ablaze, and to R2’s left is Obi Wan’s lightsaber. Above the droid floats Luke’s helmet, a Vulptext, a diplomat’s blaster, and a Y-Wing. It previews how reading this dictionary is almost like walking into an exhibit of the films and getting to see everything up close and personal, out of their original contexts. 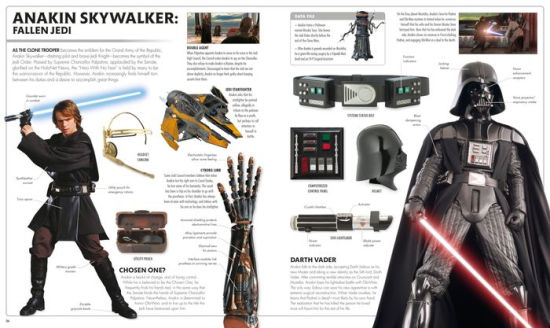 Prefacing the Prequel Era section is a “Galaxy Overview,” and the first page of this spread features the logos of the various agencies that ruled the galaxy and those who resisted such rule. The other side of the spread features select planets: Coruscant, Naboo, Jakku, Tatooine, and Starkiller base. I’m not sure what the criteria was for featuring these planets and leaving out others like Hoth, Crait, and the moons Endor and Yavin 4, but I think a section mapping out all the planets and moons in the galaxy would be fantastic although that would take up many pages.

Following those pages is a section called “Special Technology” that describes Lightsaber, blaster and droid technology. It illustrates the key or most impactful technological advances in the galaxy, minus the spacecraft. But I’m not sure of the value of this section since weapons and droid technology is detailed in other sections of the dictionary. Maybe a timeline or Skywalker family tree would have been a better use of that space.

Intriguingly, and of delight to me, details from Solo and Rogue One open The Original Trilogy Era section. I don’t consider them part of that era since “trilogy” denotes three films, however there is a intriguing blurring of the lines between films. For example, in the “Imperial Leaders” spread blurs the lines between Rogue One and A New Hope with Krennic appearing next to Admiral Piett and Moff Jerjerrod. Similarly, the pages about Darth Vader have scenes from A New Hope, The Empire Strikes Back, and Rogue One. It provides an overall survey of those characters and their place in that era. 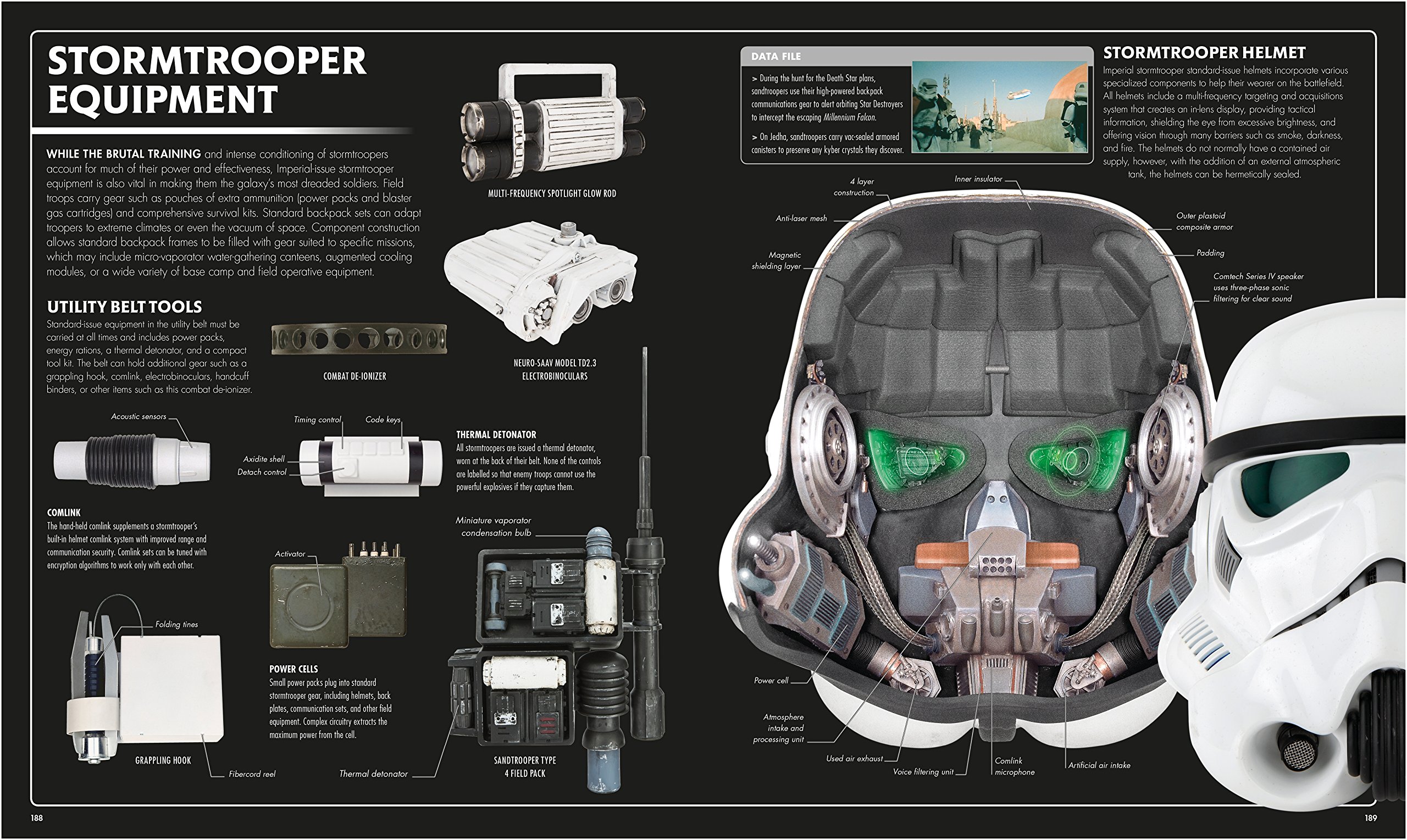 Of course, some pages seem almost identical to their initial appearances in the individual film visual dictionary, but they’re not entirely the same. In the case of Kylo Ren, some of the images and text from The Force Awakens Visual Dictionary have been reordered and placed alongside new images and information. However the images and layout from The Last Jedi Visual Dictionary is duplicated, but the text of the paragraphs and captions have been updated.

And the forbiddance of saying “Ben Solo” is no more, as he is mentioned five times in this dictionary in the sections about Leia, Han, Rey, Snoke, and Kylo Ren. I was hoping for more about him, like maybe the image from the flashback scene where Luke confronts him in the academy and more about his calligraphy set that appears on the opening page of The Sequel Era section (as well as in the index of The Last Jedi Visual Dictionary).  But maybe that’s because I’m obsessed with Kylo Ren.

I LOVE that the pages about Snoke, Kylo Ren, and The Praetorian Guard are the only ones in the book that are black with white text. The dark side stands out — as it gloriously should! — from the rest of the pages, which are white with black text.

The introduction states, “this revised and expanded guidebook illuminates even more nooks and crannies of that far away galaxy.” One of the nooks and crannies I was intrigued by is the food in Star Wars. I brings authenticity to a fictional world. I imagine there would be an incredible assortment of traditional dishes that represent the various cultures around the galaxy, as well as incredible innovations of cross-cultural, cross-planetary, cross-species fusion cuisines. I was hoping for details about the meal Darth Vader had arranged on Cloud City, but no luck. The sections about Dexter’s Diner, Yoda in exile, and Maz Kanada provide the most details. Disney should adjust these recipes for earth palates and serve them at their amusement parks — I would love to try some sliders and the Sic-Six Layer Cake from Dexter’s Diner!

Some might feel that this book is part of a colossal money grab by Disney since there are other “complete” visual dictionaries as well as the ones published for individual movies. Of course they want to make more money. Yes, there is information that is repeated from previous dictionaries. But one must consider that this might be the first Star Wars visual dictionary someone reads. And, just like the English language, the Star Wars universe is continually evolving and additions and amendments are needed, so like our language dictionaries, the Star Wars dictionaries must be updated.

Each of these pieces from the films has its own backstory and, as the book explains, that comes from the creation of the films as well as details in novels, comic books, and videogames. It adds layers to the characters we think we know so well and dimensions to the details that only appeared briefly in the films. It provides people, like me, who have not indulged in the novels, comics, and videogames a way to deepen their experience of the films. It also serves as a reminder of the immense imagination and great care that goes into creating a film, which inspires others to take us even farther and further into that favorite galaxy far, far away.