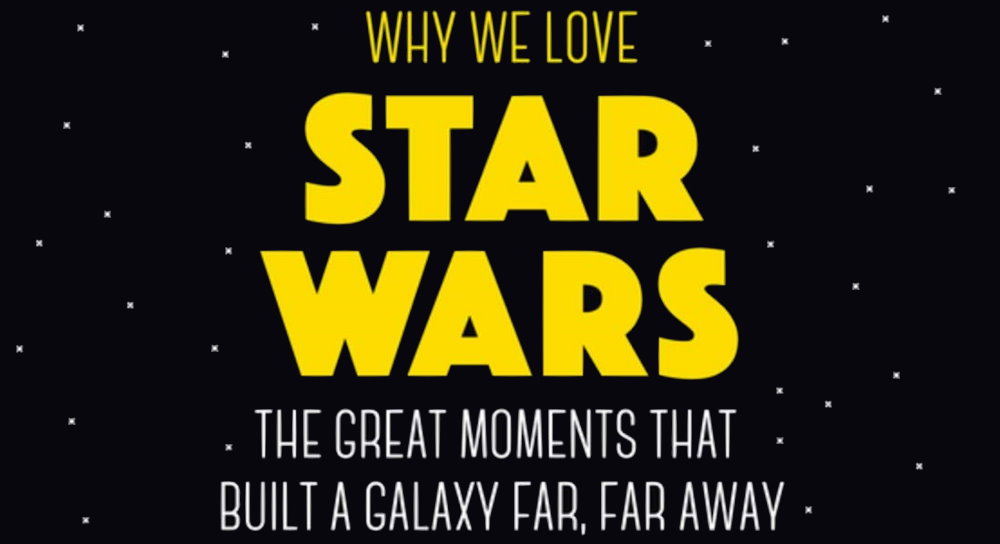 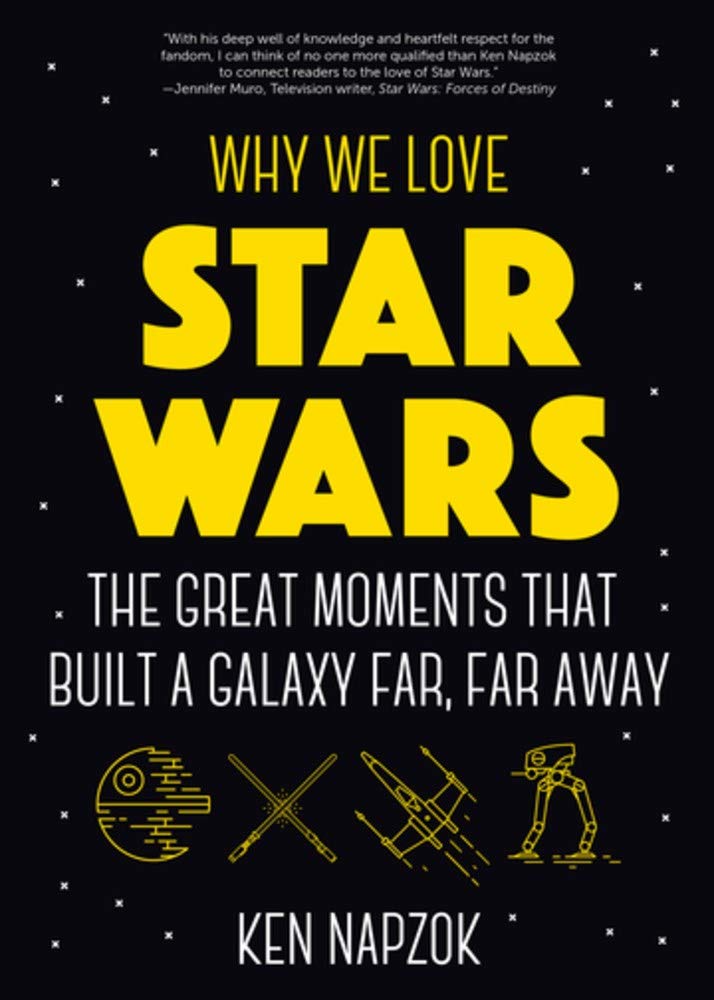 Why We Love Star Wars: The Great Moments That Built A Galaxy Far, Far, Away

What began as one movie about knights and cowboys in space, evil oppressors, and the mystical energy that stood between them has exploded into a worldwide phenomenon that has inspired generations. All of us who are deeply influenced by the epic saga of Star Wars have our favorite moments. Each time the screen goes black and you see those words–”A Long Time Ago, In a Galaxy Far, Far, Away”–and the music blasts through you, you feel like a kid again. Ken Napzok, co-creator of ForceCenter, recaps each one of those special moments that makes this series not just the Force behind some of the best movies, books, and graphic novels of all time, but the Greatest Saga Ever Told.

I didn’t go looking for Why We Love Star Wars rather I seemed to have been drawn to it. I noticed the book on the shelf at my local bookstore, thumbed through a few pages and put it back. I browsed the aisle a bit more and found myself back at its shelf. There was something about this book; it had me in its grasp. I picked it up again, put my trust in the Force, and purchased a copy. I have to admit that I was not familiar with Ken Napzok nor the ForceCenter podcast before my purchase. After reading the book and listening to the podcast, the only difference in having that knowledge beforehand would have been a shorter visit to the bookstore. I would have had my copy reserved.

In Why We Love Star Wars, Ken lists, as the title implies, what he considers the elements of the Star Wars saga that make it so unique and wonderful. His book is not merely a list of moments but an expression of his passion for Star Wars. He does this by describing interrelationships of those moments which lead to a spectacular number one choice. He explains in 200 or so pages, exactly everything I try to explain when someone asks why I love these movies so much. He just does it better.

As I read through the introduction and prologue, I had sensed that I found a kindred spirit. I could relate to his evolution as a Star Wars fan as it mirrored a lot of my own experiences. In fact, we both suffered infantile amnesia of our first viewing of A New Hope as it appears our parents may have had similar luck finding a sitter that night in 1977 and had to bring their newborns to the movies. Ken posits there is a moment in every fan’s life where they realize this is more than just a movie. Once that line is crossed those moments are infinitely compounded from that singularity. Ken’s book lists just a hundred of those resulting moments. 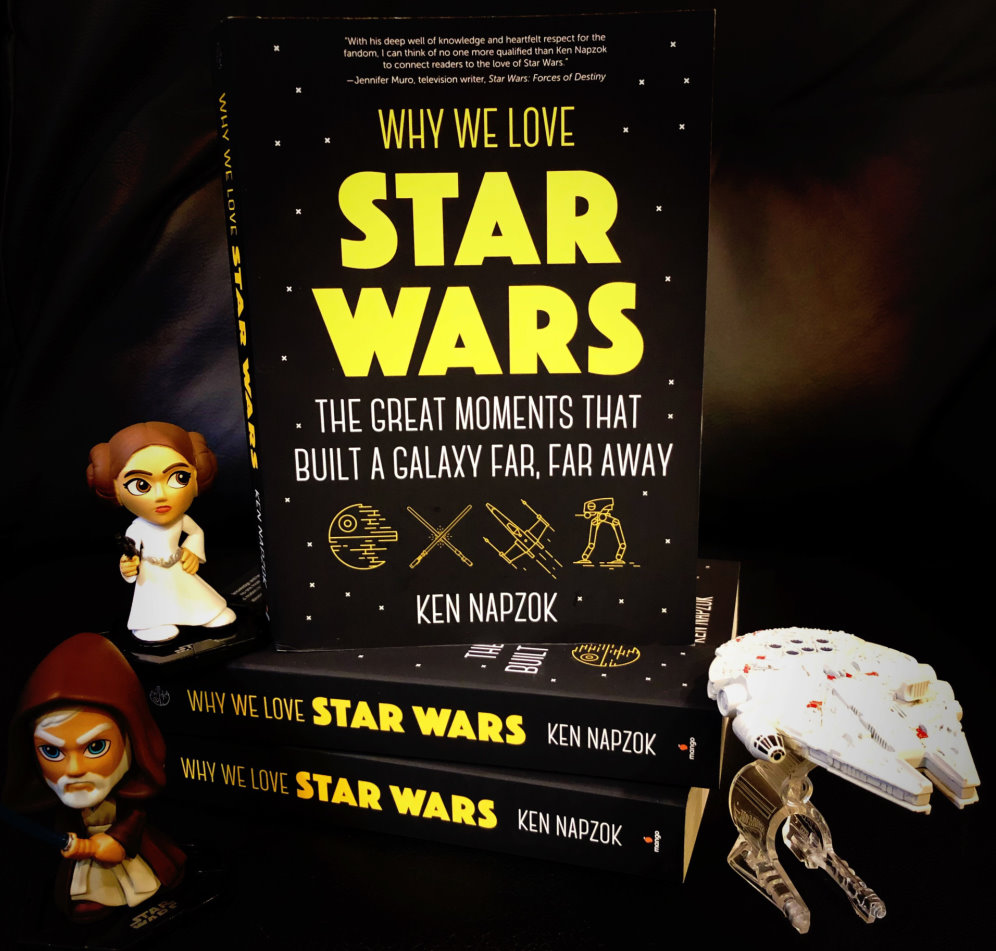 Ken’s moments are contained in the theatrically released movies, books, and Marvel Comics following Disney’s acquisition of Lucasfilm. This decision does not diminish all the other content but I imagine the book might still be a work-in-progress had he incorporated everything. Plus a casual or emerging fan may not have the familiarity or access to the enormous amount of content Star Wars has generated over the past four decades.

I found that I agreed with the majority of Ken’s moments but disagreed with none. Instead, he gave cause to reexamine those that I might not have consciously realized as one of those great moments. I always found part of the allure of Star Wars is that once you think you might know it all, you discover another layer to be explored.

I am not going to spoil any of the book but Ken’s number one choice is absolutely exquisite. I am happy to say that it wasn’t until my fifth viewing of The Rise of Skywalker that the moment recreated was spoiled for me by some over-enthusiastic yahoo. I can’t blame him though. Afterall, it is Star Wars. He draws ninety-nine together into one quintessential conclusion.

Ken’s use of brevity thoroughly describes his rationale behind each of his choices. One could easily get carried away with describing every piece of a Star Wars moment as to what makes it great but it would probably make a book twice as big but a lot less entertaining.
In conclusion, I strongly suggest adding this book to your library and subscribing to the Forcecenter podcast as soon as possible. There are hours upon hours of great Star Wars discussion to be had.

Why We Love Star Wars: The Great Moments That Built A Galaxy Far, Far Away (Science Fiction, For Fans of Star Wars: The Lightsaber Collection)
$15.49
Buy on Amazon Price incl. tax, excl. shipping