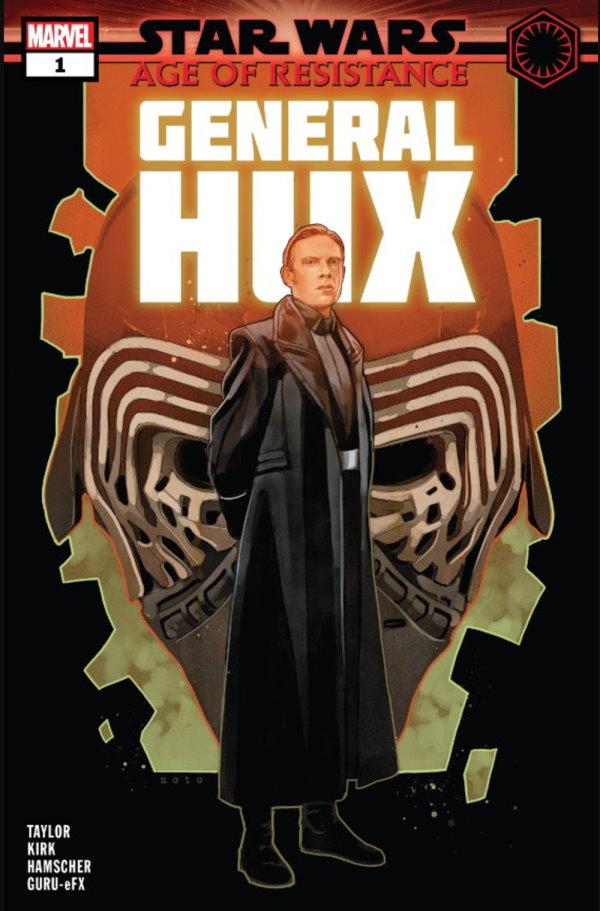 Ruthless General Armitage Hux is one of the First Order’s most dangerous and trusted leaders, third only to Kylo Ren and the Supreme Leader himself.

What made Hux the man he is today? Ambition? Or…something far more sinister….

Introduced in The Force Awakens, General Armitage Hux was very much in the mold of the classic British Star Wars villain, determined to grind the Resistance beneath the heel of the First Order and prepared to launch the superweapons of Starkiller Base at the New Republic capital of Hosnian Prime and it’s neighbouring worlds, putting the entire galaxy (who saw the cataclysmic events happen in real time thanks to a  hyperspace tear) on alert. However, The Last Jedi presented Hux as a somewhat comedic character, pulling faces through the events of the film and – no longer in any way the equal of Kylo Ren as he was in TFA – reduced to being Force slammed around the cockpit of Ren’s shuttle just as Snoke had similarly belittled him on the bridge of the Supremacy.

This issue takes place well before the events of The Force Awakens, and goes some way to revealing just why he is equal parts driven leader and somewhat pathetic character and takes its place as – so far -the most revealing and impressive entry in the Age of series. Not just the ongoing Age of Resistance series, but all three eras.

We open with Hux as a young boy, and learn that he is the adopted son of Commandant Brendol Hux and treated horrendously, a life we see as he is humiliated – a recurring theme in his life – in front of Admiral Brooks. Flashing to the present we’re with Hux and Kylo Ren, aboard a stricken shuttle heading towards a planet and upon impact, it’s Ren who rescues Hux from the wreckage. So, two of Snoke’s henchmen – at this point relatively equal in power and influence within the First Order – are marooned on the planet, and soon have to contend with fierce furry natives who incapacitate Ren.

It’s here that the issue becomes really interesting as Hux encounters a survivor or Alderaan, unaware that the Galactic Civil War was at an end after the destruction of his homework, and when he learns that Ren is the son of Leia Organa we see a different side to Hux as he compares Ben to his mother Leia and persuades the lost soldier that they can call for help.

And here the deliciously twisted turn as not only does Hux refer to Kylo as Ben as he wakes from his knockout punch, but he also turns on the Alderaanian, killing the tamed native creatures that accompany the stranded soldier and promising to destroy his world under the canon of the still under construction Starkiller Base. It’s an obvious turn – why would he have sympathy for a son of Alderaan (of which Ben is one generation removed don’t forget) – but the way it’s delivered, with a chilling coldness (did Starkiller Base ever destroy that world?) layers on the menace and intent of Armitage Hux.

Tom Taylor really sticks the landing on this one, making it perfectly clear why Kylo (in The Force Awakens at least) has a grudging respect for Hux, and why Snoke elevated him up the ranks as he did. The final three pages, as Hux reveals to a doomed Admiral Brooks that it was his orders that saw his adopted father Brendol executed, nail the danger of the character. Let’s hope that in The Rise of Skywalker Hux is returned to his dangerous persona rather than the slapstick version we saw in The Last Jedi. Crisp art, great covers and a tight script – excellent work all round.

STAR WARS AGE OF RESISTANCE (AOR) GENERAL HUX #1 MOVIE VAR
$29.99
Buy on Amazon This is a paid link. Learn More. Clicking the link may take you to the Amazon store servicing your country Price incl. tax, excl. shipping.  Details correct as at: 2021-05-13