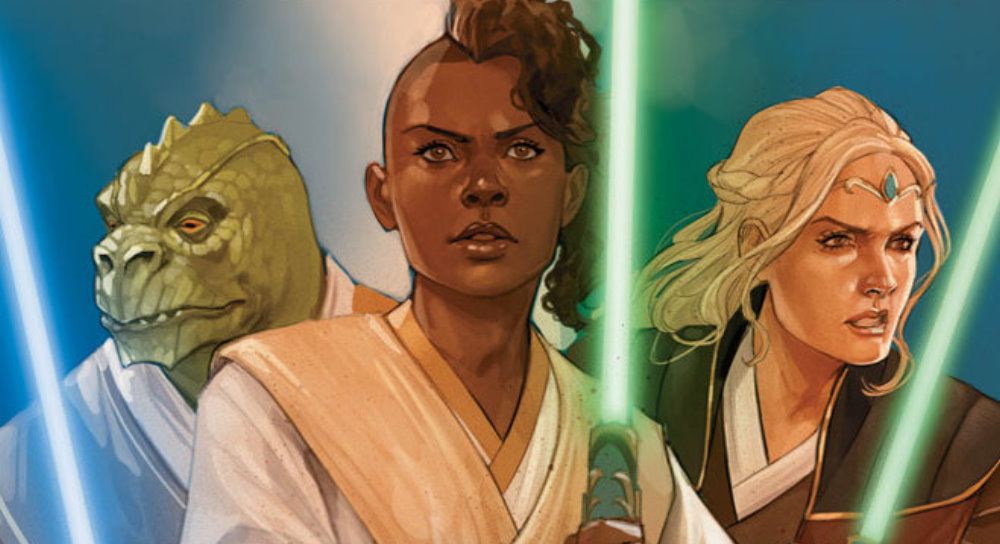 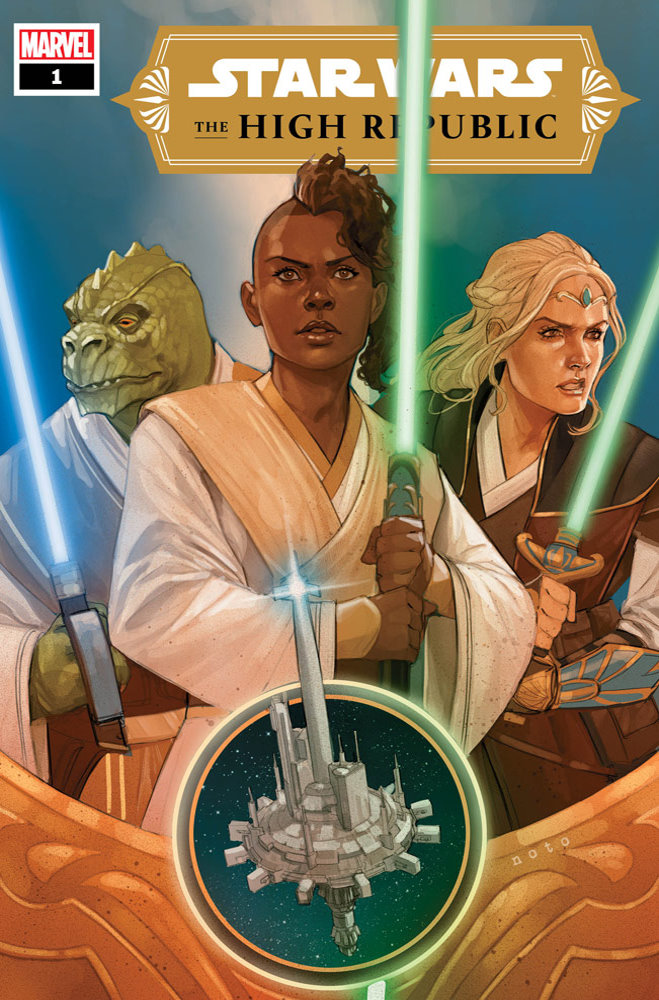 The galaxy is at peace, ruled by the glorious REPUBLIC and protected by the noble and wise JEDI KNIGHTS.

As a symbol of all that is good, the Republic is about to launch STARLIGHT BEACON into the far reaches of the Outer Rim. This new space station will serve as a ray of hope for all to see.

But just as a magnificent renaissance spreads throughout the Republic, so does a frightening new adversary. Now the guardians of peace and justice must face a threat to themselves, the galaxy, and the Force itself….

As the era of The High Republic begins, not only are we about to be introduced to new worlds regions, political situations and characters but also the chance to view people and places familiar to us through a two century old lens. Light of the Jedi and A Test of Courage have launched the era in book form and now writer Cavan Scott and artist Ario Anindito kick off the comic adventures in the first issue from Marvel, and the good news is it’s a page turner.

Taking us to Shuraden on the Republic frontier (where around the galactic spiral we don’t know, Lucasfilm appear frustratingly reticent to clarify where these worlds are situated) we find Trandoshan Jedi Master Sskeer and his Padawan Keeve Trennis battling with their lightsabers, a clash that is revealed to be a part of her Jedi trials. Keeve is immediately engaging, while Master Sskeer clearly knows her well. Bested by her in combat quite possibly by the loss of balance from his missing arm (don’t worry, like Deadpool it’ll grow back) he’s dry enough to place a pendant at the top of high stone needles for Keeve to retrieve. Pepper in the tiny winged native Kanrii and immediately we’re on our way.

Starlight Beacon has been revealed to be one of the key elements of the era, a station designed to be Maz Kanata’s castle of good intentions at the fringes of the explored galaxy, and it’s there we swing as we meet a group of new and familiar Jedi, including Yoda who is terading his own path aboard the uniquely named Star Hopper and Avar Kriss, who we already know is one of the primary Jedi of the era. She’s offered the job of marshal of Starlight Beacon (there seems to be a lot of that job role going around lately) as we head back to Shuraden where giant winged insectoids are attacking the planet, and Keeve learns that Starlight Beacon is blocking their access to a magnetic pulse that helps them navigate the stars. A quick bit of thinking, a Jedi starfighter on autopilot and an altered beacon frequency later and the panic is averted.

Perfect them that Sskeer and Keeve arrange passage to Starlight Beacon where they meet Avar Kriss, coming off very much like Galadriel as she invests Keeve as a Jedi Knight (despite the starstruck Jedi swearing like a jumptrooper) and watch the dedication ceremony as Kriss swears that the Jedi will be there to protect the galaxy if the darkness should ever return, and we end with a classic clifffhangar – Sskeer, back in his quarters screaming ‘NO!’ to the ceiling. Why? I’m betting that pendant had a deeper meaning than we realise, but issue two will surely bring more details.

As first issues go this was a doozy, bringing new characters in and instantly defining their characters. Keeve is a treat; outwardly placid and controlled with a touch of impatience, she’s intelligent, willing and ready to do what’s required. There’s a chink of uncertainty about her as well, despite achieving much in the issue she can’t quite believe it, and that lack of ego – and her proclivity for colourful language – makes her fun to read. Sskeer is the classic grouchy master, a Trandoshan in an unusual role for his species, and the other new Jedi are equally engaging, particularly Maru who enjoys a quip (although surely he’d be playing Arcadian Jizz, not Arcadian Jazz?). The humour is unexpected and very welcome, and here’s hoping that’s handled well. It’s never a huge step from witty and smile inducing to crass and cringeworthy, so here’s hoping that’s navigated well.

We say it often here, Cavan Scott knows his way around a Star Wars story and his first dip into The High Republic doesn’t disappoint. It’s light, pacey, engaging and laden with enough information to make the next issue a must read, and paired with the delightful work of penciller Ario Anindito, inker Mark Morales, letterer Ariana Maher and colourist Annalisa Leoni this is one to watch for sure. Top drawer – The High Republic is off to a flyer.