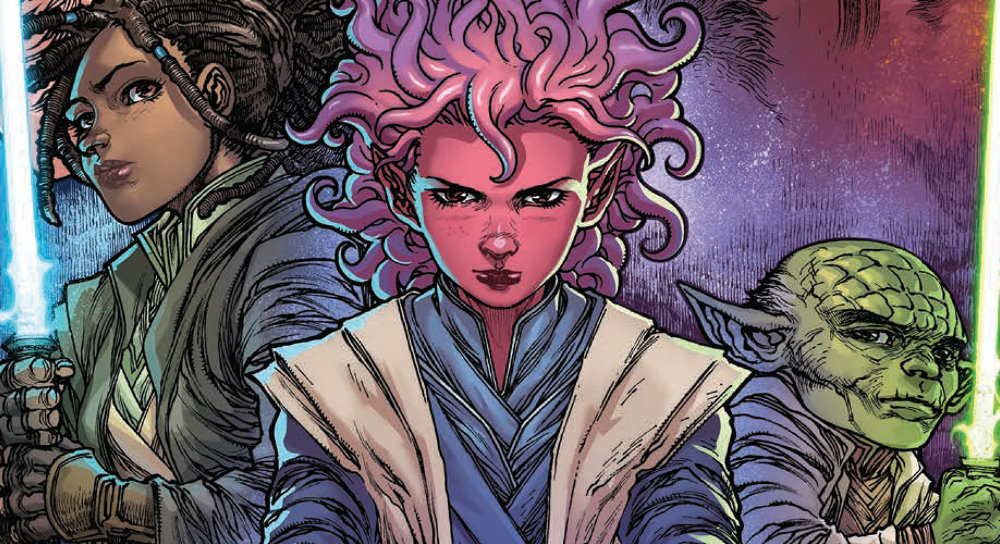 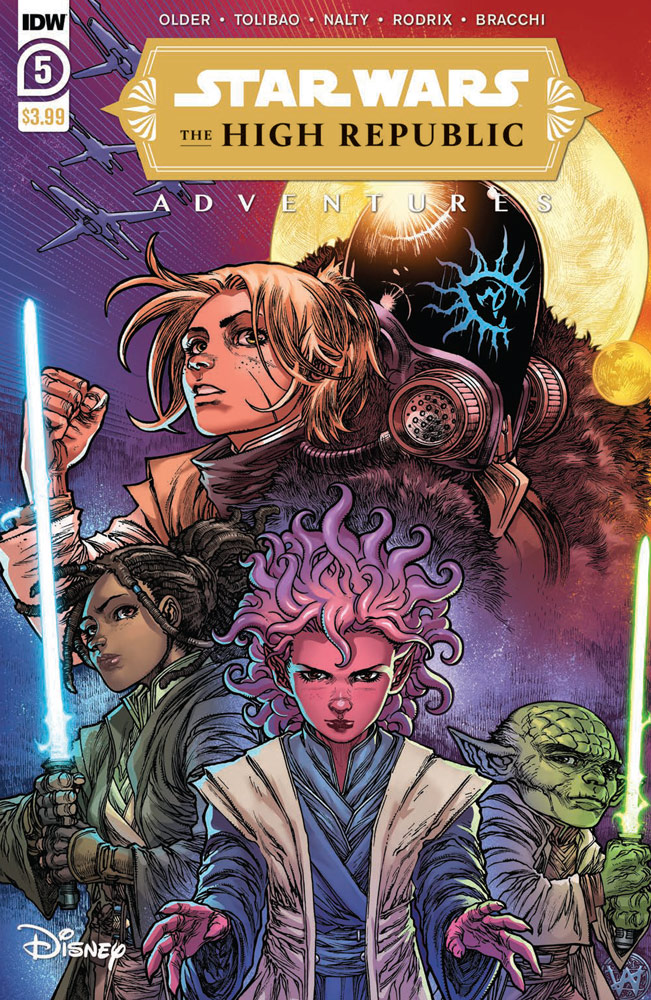 SHOWDOWN ON THE JUNK MOON

Following a daring battle against Nihil forces, MASTERS YODA, BUCKETS OF BLOOD, and KANTAM SY race to the junk heap moon of Quantxi in answer to a distress call from their wayward padawans.

Meanwhile LULA TALISOLA, QORT and FARZALA search for their friend ZEEN, who has gone to confront her onetime friend, KRIX KAMERAT, who hopes she can save him from the evil MARCHION RO….

Another vibrant and exciting issue from the team of Older and Tolibao sticks the landing as we swing back to Quantxi the Junk Moon. Zeen is scouting the ground for Krix, only to startle the young lad as he shoots her Vector down in a blaze of fire. Meanwhile, the Nihil continue to chase down the Junk Mavens, who are summoning…something, and as the Jedi arrive to assist the Mavens all Fornax breaks loose, unsurprisingly accompanied by lavish artwork and smooth colouring from Rebecca Nalty.

The title ‘Showdown on the Junk Moon‘ is no mistake, as Nihil and Mavens clash with the Jedi contingent, while Krix and Zeen share their own showdown of sorts. Amongst the carnage, Elder Tromak appears, his well-fed Bogaranth in tow, and asks for a moment of Master Yoda’s time to explain the Nihil’s plans and remind Yoda of a prior meeting the two had, years ago on Dalna. It’s an intriguing dip into the past of The High Republic and of Yoda that will surely be resolved in time. No time for memories as a Savrip appears, tearing into the Nihil ranks as an angry Zeen finds Krix, using the Force to – it appears – Force choke him into silence. Only the arrival of Lula Talisola stops Zeen from doing permanent damage to her former friend, distracting her for enough time to allow Marchion Ro to scoop up Krix and jump away in their Spider ship.

We end the issue much like we finished the last, parallelling Krix on Vrant Tarnum with Zeen on Starlight Beacon as both accept very different destinies, this time without the hesitancy they displayed before.

While clearly a kids comic, there are certainly plenty of deeper angles at play here. Zeen is adept in the Force, a natural talent to old to be trained but her confrontation with Krix on Quantxi clearly revealed a dip into the dark side, while Krix appears to have lost hope in his friends, instead choosing the ravanger lifestyle of the Nihil, and as Elder Tromak and Master Yoda enter the Stygmarn system it’s apparant that they’re flying into a trap. The final words of the last page say ‘End of Part 1’ and it very much feels like the end of this chapter as the characters are set for thier next, defining steps. Zeen is to be trained, Krix to be initiated, and what fate will befall Yoda and Tromak is unknown, but whatever the outcome we’re all in for what comes next in one of the most consistently entertaining Star Wars comics on shelves right now.