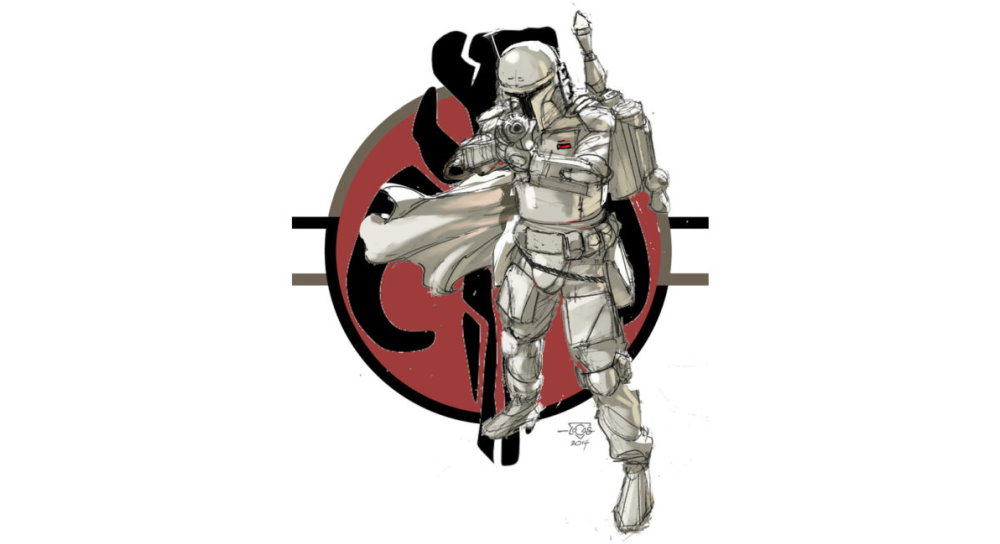 When Hasbro launched their Star Wars Black Series line in Mexico in late 2014, a promotional giveaway accompanied the popular toy line’s debut: a highly limited Prototype Boba Fett lithograph. Only 1,500 copies were ever produced and were all distributed during the launch, making this one of the most difficult prototype Boba Fett collectibles to find. The artist behind this exclusive piece, hand-picked by Disney LATM, is none other than acclaimed Star Wars illustrator Lucas Marangon.

Fans of Star Wars comics will already be familiar with Lucas through his work on Dark Horse titles, most notably the popular Tag & Bink series. Despite having achieved Star Wars royalty on the strength of this one project alone, he is extremely easy-going and approachable. On top of generously taking the time to be interviewed, Lucas also shares some never-before-seen early drafts of his iconic Black Series lithograph. Be ready for a fun read as well as a visual feast of some amazing concept art. Thanks Lucas! 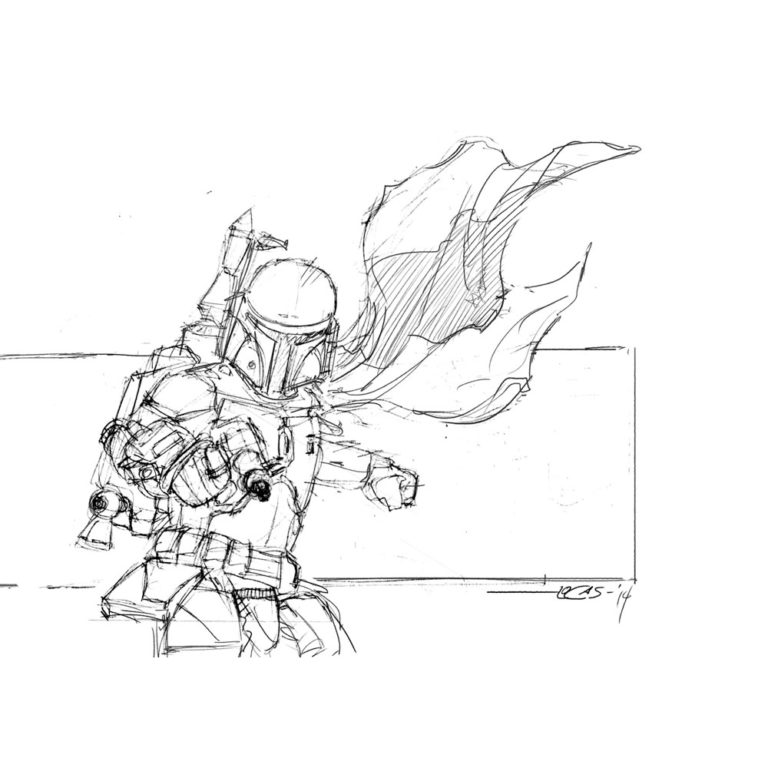 DL – What are three interesting facts about you that your fans may not already know?

LM – I’m not that interesting of a person, but let me see. I’m also a writer. I have authored a graphic novel that I wrote, drew, and colored called Hellcyon. I live in a small city near Mexico City, but I’m Argentinian. I’m also a toy collector, although this last one probably won’t come as a shocker to anyone.

DL – What was your earliest memory of Star Wars?

LM – I saw Star Wars in the theater in 1978 in Mexico City at the age of six. I was so blown away that I couldn’t think about anything else for a year. Star Wars remained my favorite thing during all of my elementary school years.

DL – When and how did you first know you wanted to be an artist? 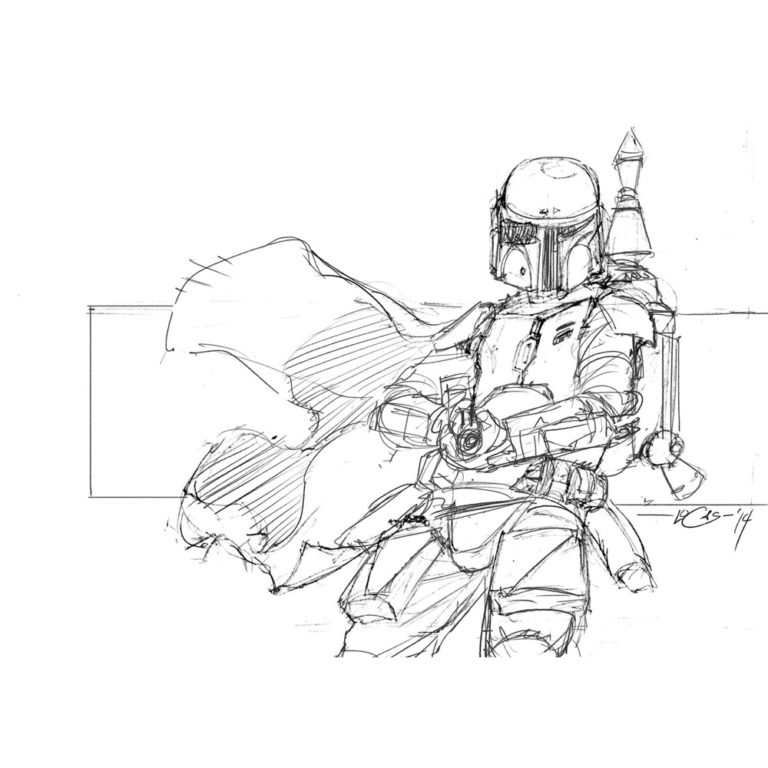 LM – In elementary school I already knew I wanted to do comics for a living.

DL – What artists/artwork have been your biggest inspiration?

LM – Many: Will Eisner, Moebius, Otomo, Alfonso Font, Frazetta, J.C. Mézières, Ralph McQuarrie, Bilal, and the list goes on and on. I’m happy to say I still find inspiration in new artists every now and then.

Born in Santa Fe, Argentina in 1971, Lucas Marangon and his parents suffered political exile in Mexico during the military dictatorship of 1976. Back in Argentina, Lucas attended the Fine Arts High School in Mendoza and then graduated as a Graphic Designer while working as a professional illustrator.

In 1996, Lucas moved back to Mexico City where he worked as an advertising illustrator and comic-book artist in various titles and companies until 1998 when Lucas got his fist gig in the US comic book industry as the artist of Dark Horse’s R.I.P.D., soon to be released as a full feature film.

Lucas is currently working on advertising, concept design, and comic books as writer, penciller, colorist and cover artist, and has collaborated on titles like Star Wars Tales, Clone Wars, and the acclaimed Star Wars Tag & Bink series. His work has been published in countries like England, Spain, Mexico, France, Argentina, Italy, and Poland. 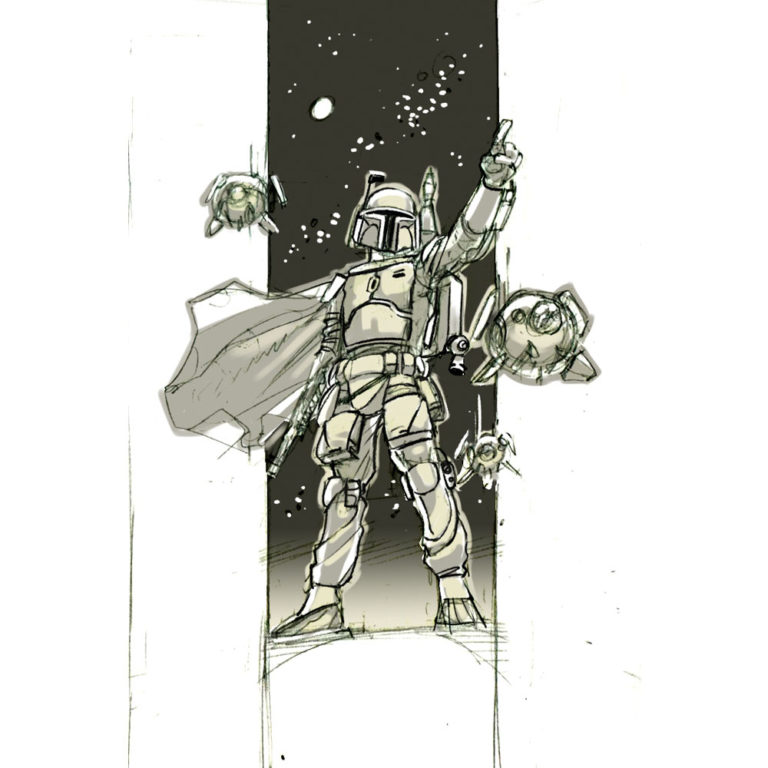 LM – My favorite is probably Obi-Wan Kenobi, besides Luke of course, who was my role model for many years. Obi-Wan has the ability to always see the big picture of things and never be overtaken by the situation. It’s also a fairly easy character to draw since you only have to focus on the likeness, unlike most of the characters of the Star Wars universe that are packed with details all around them.

DL – How did you first begin doing official Star Wars comics and art, and what has been your most enjoyable Star Wars project so far?

LM – I was lucky enough to get my first contract as a comic book artist with Dark Horse and soon after I was working on their Star Wars line of books. I have fond memories of working on the Tag & Bink series with Kevin Rubio. Kevin is so smart and funny. I had a blast drawing that series and I think it shows. The book still gets reprints to this day.

DL – You produced the limited edition Prototype Boba Fett lithograph as part of Hasbro’s Star Wars Black Series launch in Mexico. What can you share about that?

LM – It was Disney LATAM who commissioned that piece from me, so I have no idea whose idea was to do a prototype Boba Fett. However, since Disney and Hasbro organized the event for Collector’s Day, it was only logical to do a white Fett since every version of it has always been a collector’s item. The really fun part for me was the opportunity to design and paint those little probe droids. I thought “If Darth Maul found them useful 20 years before, why wouldn’t Boba Fett have a few of his own among all his gadgetry?”

DL – What was the inspiration and story behind the composition of the lithograph, and what was the creative process like?

LM – The pose was pretty much decided right away, which is not very advisable since as a design principle you should never stick to your first idea. I was more worried about the colors since the main subject was white, so I did a few color sketches trying to make it interesting. At the end I went for a black backdrop which worked very well. 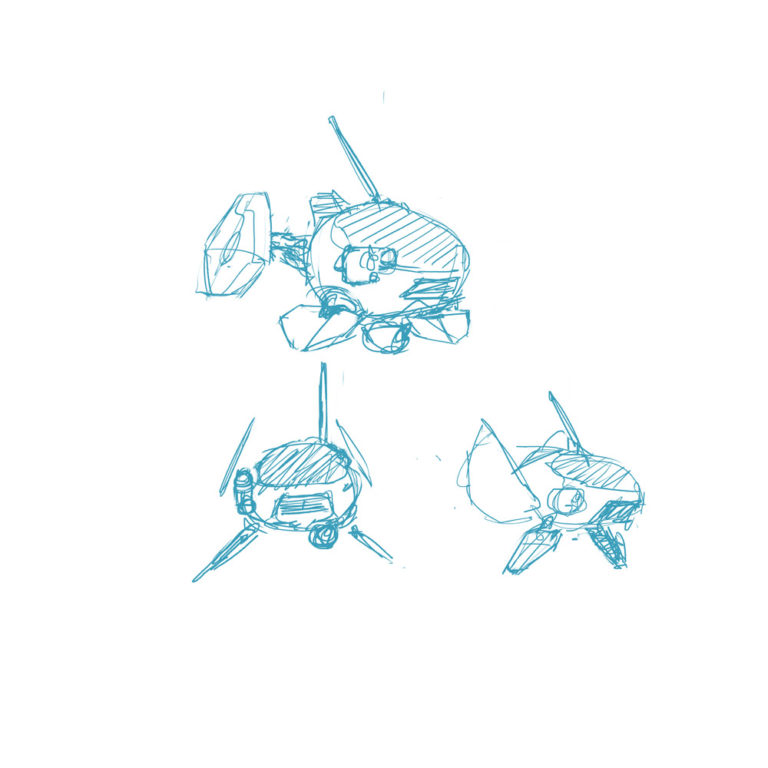 I was thrilled to be able to design something for the Star Wars universe since I’m a conceptual designer at heart, so as I mentioned, I wanted to give Boba Fett some probes a la Darth Maul. I had the concept very clear in my head, so I only did a few sketches for proportions and detailing right before jumping to the piece. Once I finished the render, I tried some “design” ideas. I liked the elegant monochromatic take on this, but since the main elements were white, I though it looked underwhelming so I got rid of the white areas and added some color in the background. 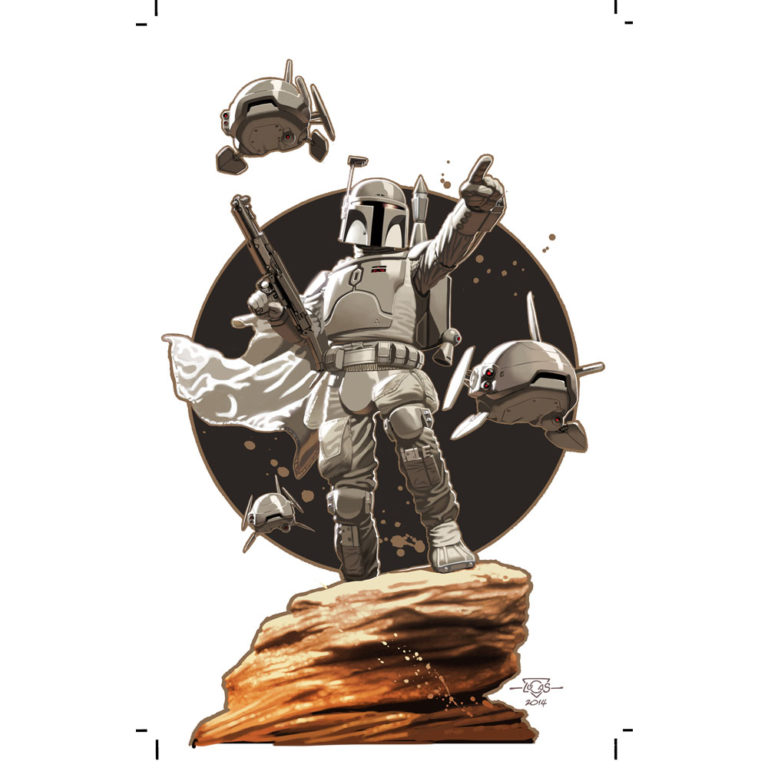 I liked my early pencil sketches. They have movement, but I rapidly ditched the lower angled compositions because they were too flat. I liked the high angle for some reason, possibly because it was a full shot, so I tried various designs to make him stand out but I realized that it lacked dominance, thus making Boba Fett less imposing and dangerous.

As for the final sketch that I sent out to Disney, I was concerned about the addition of probes because they get very nervous over unsolicited designs, but Lucasfilm approved it. 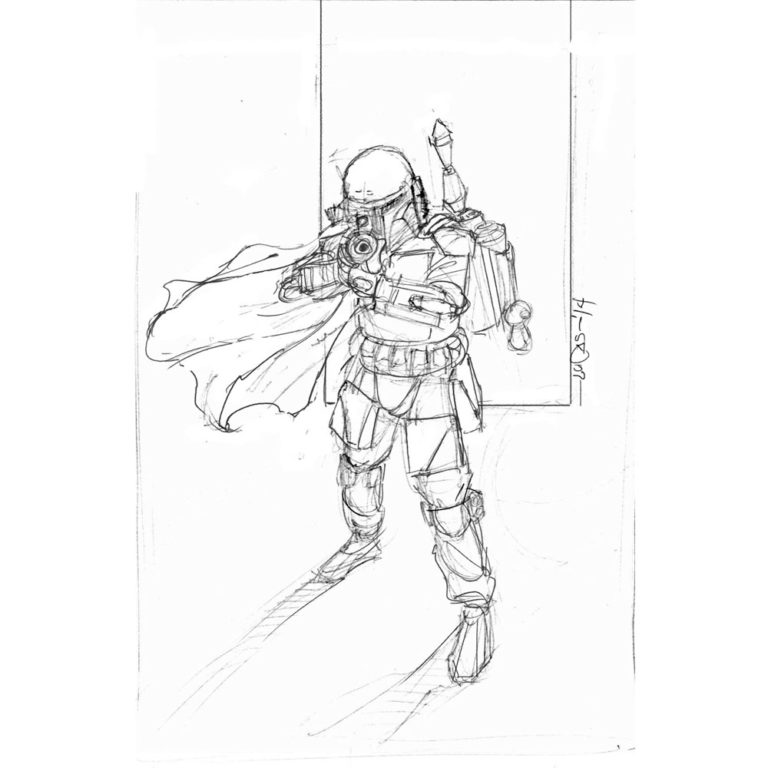 DL – What is the most important piece of advice you would share with aspiring artists?

LM – Be tenacious and make your priority living off what you love the most instead of making money. Money will come eventually.

DL – Lastly, what is a dream goal as an artist that you have not already achieved?

LM – Making a lot of money! Seriously now, there’s many things I’d like to explore artistically, but in my experience, life gets you there sooner or later, so I’m just trying to enjoy the ride.