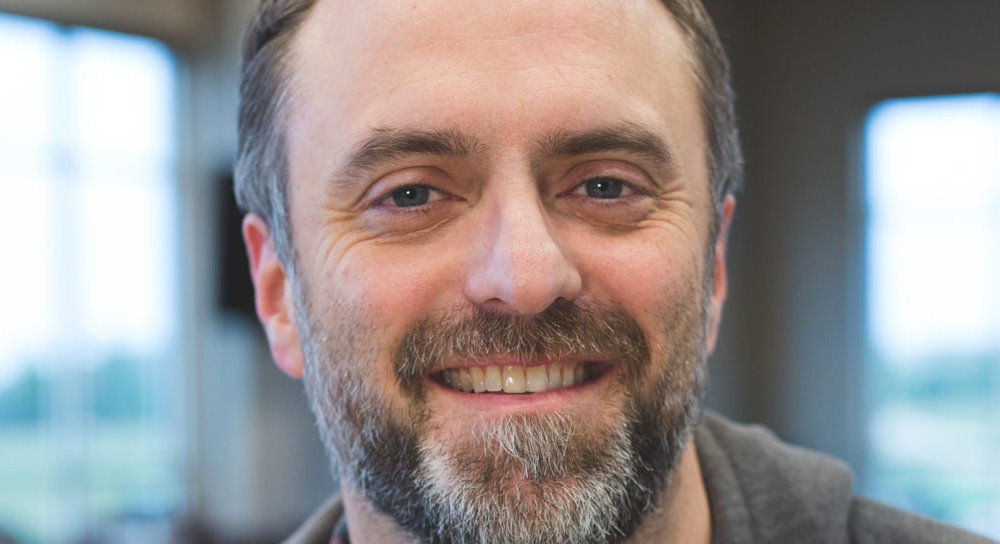 For over forty years Topps has partnered with Lucasfilm to deliver amazing trading cards for the beloved Star Wars fandom. As time passed, Topps began to integrate specialized hand drawn sketch cards into their series runs. The artists behind these one of a kind cards are absolutely phenomenal and are woven into fabric of the Star Wars community. One of those artists is Ben AbuSaada.

Over the past few years AbuSaada has completely immersed himself in the fandom by sharing his masterpieces through social media and talking about the franchise we hold so dear. We caught up with Ben for a discussion about his Topps career.

FT: Can you recall your first Star Wars experience?

BA: My first Star Wars experience was in 1977, I was three, I saw it [A New Hope], I don’t remember my first viewing experience very well. I do remember coming out of the theater and seeing a trash can, and it was a domed trash can. I kept saying R2-D2, R2-D2.

FT: You were hooked! 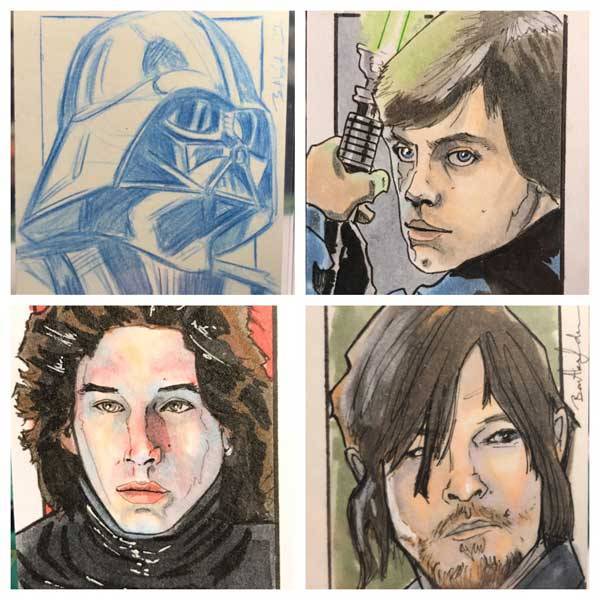 BA: I gravitated to it right away, because before seeing the movie I was into Hot Wheels and Matchbox cars, and then I saw this movie and all I wanted was Star Wars. Star Wars replaced all of that. It’s been there ever since.

FT: What was your first Star Wars toy?

BA: My first Star Wars toy was R2-D2 (the original Kenner version) my mom bought me, its been through creek beds, bathtubs, all that stuff, so the sticker is pretty much rubbed off, but it is my most prized possession.

FT: (Holding up a Jar-Jar Binks Plush) Even this guy?

BA: I even love Jar-Jar; Jar-Jar has a place. I have been a Jar-Jar defender. When I went and saw The Phantom Menace in 1999, I took my two cousins, who were nine years old, the one thing they could not stop talking about was how much they loved Jar-Jar Binks. People can talk him down or whatever they want, but I just remember that day and all my cousins wanted to do was buy Jar-Jar stuff. So I took them to Toy ‘R’ Us, and got them each a Jar-Jar action figure and a poster.

FT: How long have you been involved with Topps and their Star Wars series’? 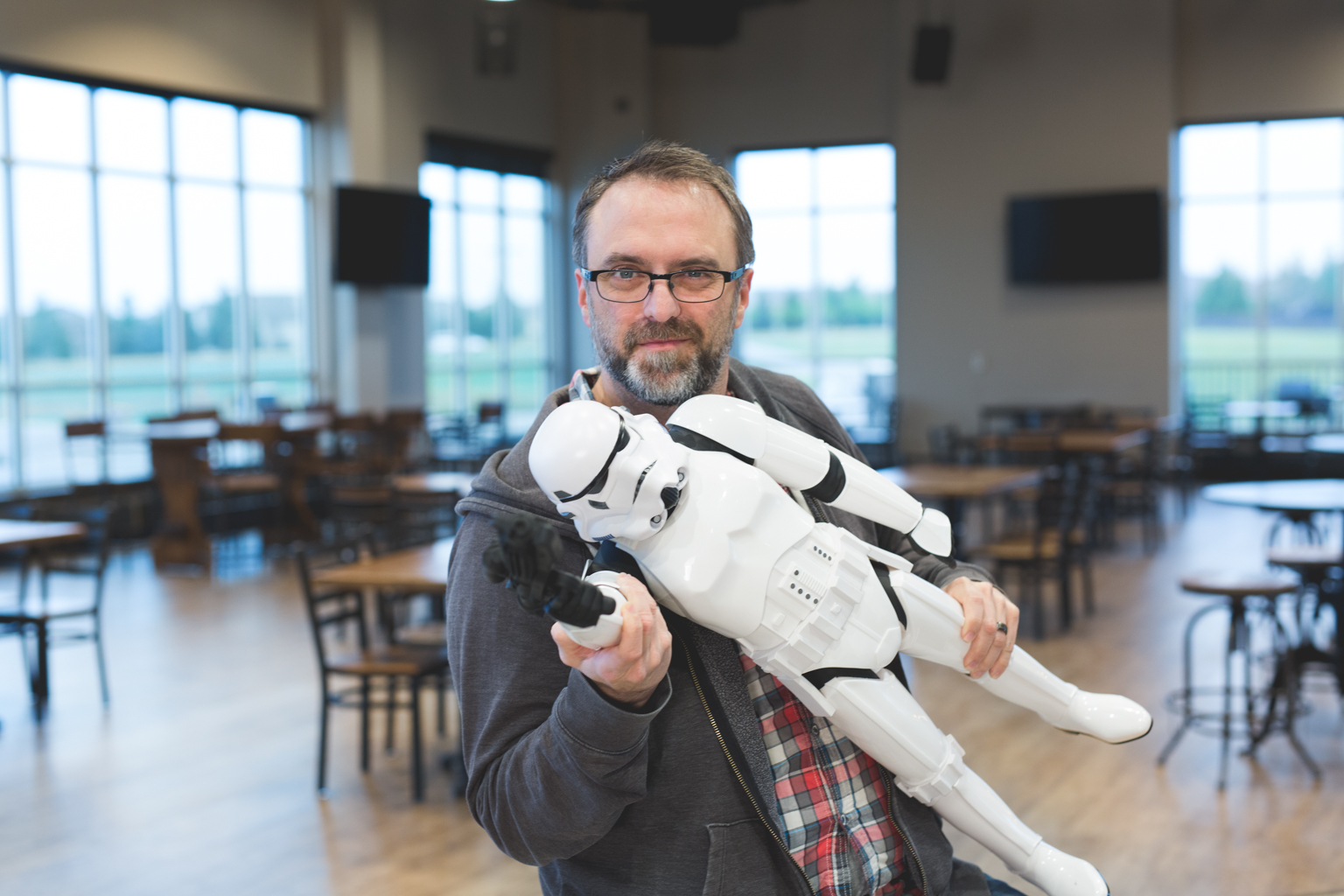 BA: I started doing the Topps cards in 2016. To get the first gig, I submitted a portfolio to Topps, and a week later they invited me to be a part of the Rogue One Series 1. And ever since then they’ve invited me to do all the other Star Wars series.

FT: Out of all things, why sketch cards?

BA: Growing up, I loved drawing, and was a big time doodler. When I was in middle school, going into high school, I desired to become a comic book artist. I was big into Marvel at the time. But as time went on, I picked up a guitar and started focusing heavily on that. Then in 2013, there was a guy that I met at a local church, and I found out he was Todd Aaron Smith. He had worked on Batman: The Animated Series, he and a few others had created the Harley Quinn character. He showed me what he was doing, he was working on sketch cards. I thought oh my gosh, he’s working on Star Wars licensed stuff! He was doing exactly what I wanted to pursue when I was young. Then he received an assignment to do a Revenge of the Sith set, so he came to me and asked, “how would you like it if I could make one of your dreams come true?” He said, “what if I let you design a sketch card?” It was a huge deal for me. He gave me a blank card and said draw something out and I did, then he redrew my work. After that he said, “what I’m going to do is send this off to Topps, and it has to be approved by Lucasfilm, so you can say in your life, I have an approved piece of artwork from Lucasfilm.” As I was doing it Todd said, “you’re not too bad, if you were to keep drawing, I think you could keep doing this.” I started drawing all the time when I came home from work, I started posting on Instagram, and people started asking, “how much for that,” and requesting pieces for twenty bucks. I thought, “I guess I’m good enough for people to start parting with their money.” Then after a year and half I submitted that portfolio. Now I’m drawing real, official Star Wars stuff, and it’s a childhood dream.

FT: What was the design you gave Todd Aaron Smith?

BA: It was the scene where Obi-Wan jumps down to confront Grievous and does the two finger pose. He’s my favorite character, and I love the Ewan McGregor Obi-Wan.

FT: After all that time, how did it feel to actively draw again?

BA: I found that it had been a part of my brain that I hadn’t tapped into for years, and when I sat down and started doing it, I found it extremely therapeutic. It was like, I forgot about this creative side of who I am. And after a long day, I just need to sit down and draw.

FT: How frequently are you drawing? 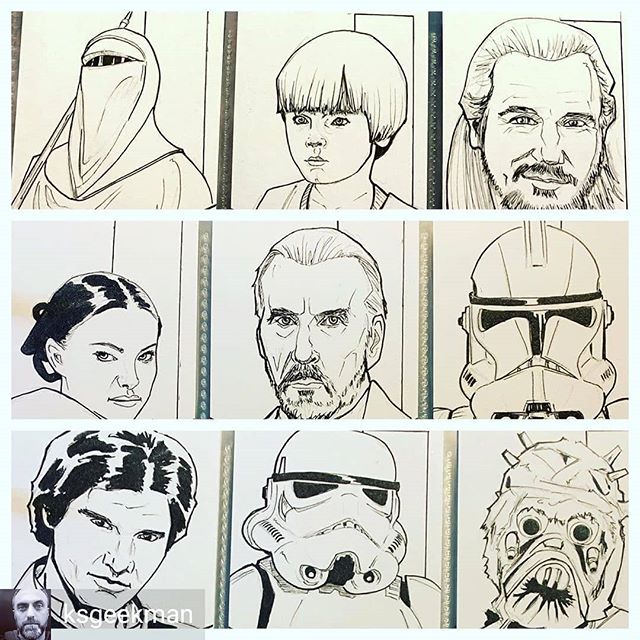 BA: I go through spurts, right now I have a project, so I’ll sit down and draw everyday for a stretch. In the beginning, I was drawing every day for a year and half, then I had to start stepping away to take a break. Which is good for me, and good for my family because they get to see me out of the basement. I come out of my cave, poke my head out, and go, “hey what’s going on everybody?” Then head back down.

FT: Workload must be intense?

BA: There’s a minimum of thirty [cards], the standard fifty, or up to a hundred with our art director’s approval. You have the option to choose whether you do them in color, grayscale, or black and white. Part of our agreement is we get to keep a percentage of our cards, so if I do a set of thirty in black and white or gray I get to keep three cards so they will send me thirty-three cards. But if I did them in color we get to keep one extra. From there we can sell them or collect them.

FT: That’s pretty cool they let you do that!

BA: Yeah. A lot of times my cards will also show up on eBay, and I’ll buy it back because I really liked it and I will give it away to a family member.

FT: Is it difficult parting with your art, especially pieces you’re proud of?

BA: Great question! Yes, it can be. Sometimes there’s just that one piece that means more because of the time spent on it, maybe you love the subject matter or you just feel really pleased with how it turned out. But I always find the joy of seeing people enjoy your work more rewarding!

FT: Most difficult character to draw?

BA: I would say anyone that has a face. Probably the hardest to draw, is Carrie Fisher as Princess Leia. She is difficult to draw because she has an expression in her eyes that’s challenging to portray, because if it’s done incorrectly, you will lose her character. It’s a credit to her, because you can see why she got the role.

FT: What designs in Star Wars captivate you the most?

BA: I love the designs of the original trilogy and prequel era; the broken down look of the originals and the contrast of the shiny newness of the prequels are fun to tackle, which is why I love drawing clones and battle droids. 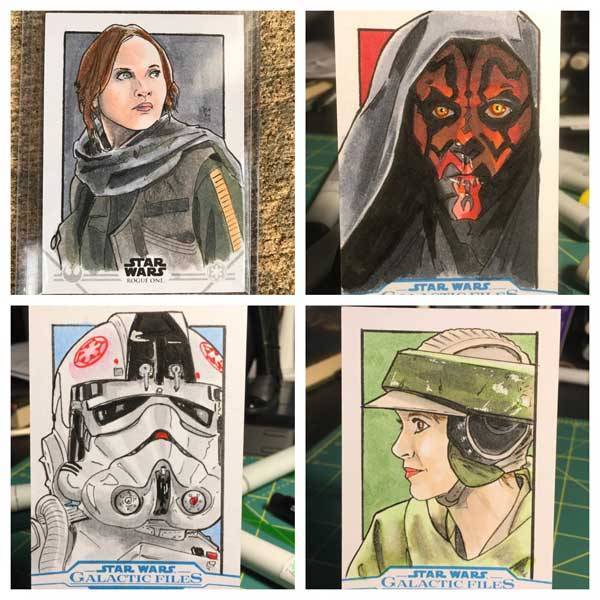 FT: Have either Ralph McQuarrie or Doug Chiang been of influence to you as an artist?

BA: Both are extremely influential. I have always loved Ralph’s work growing up on the original trilogy. Doug’s design work and implantation of it in the prequels is also inspiring.

FT: How do you go about reinterpreting iconic scenes or characters? Is fan pressure ever an issue?

BA: I pretty much just use references from the films and the reinterpretation comes in the tools used to draw/color. Whether it’s COPIC marker, colored pencil or watercolor, the tools can make a significant difference in the look of the images we’ve seen a billion times before. I sometimes ask Star Wars fans what they’d like to see more of and it’s helpful, but I’ve never felt pressured to do one thing or another.

FT: Any favorite sets you’ve worked on for Topps?

BA: I’ve enjoyed working on the Masterwork and Galactic Files sets because you’re not limited to a specific film or era, they are always fun for me. The biggest thing that all sketch card artists aspire to do is get a printed base card, and I was invited to do that for the Star Wars Galaxy set last year.

Keep up to date with Ben AbuSaada on Instagram and Twitter @KSGeekMan for his latest works! Also be on the look for his sketch cards in the upcoming Star Wars Chrome Legacy set from Topps coming out on August 7th.