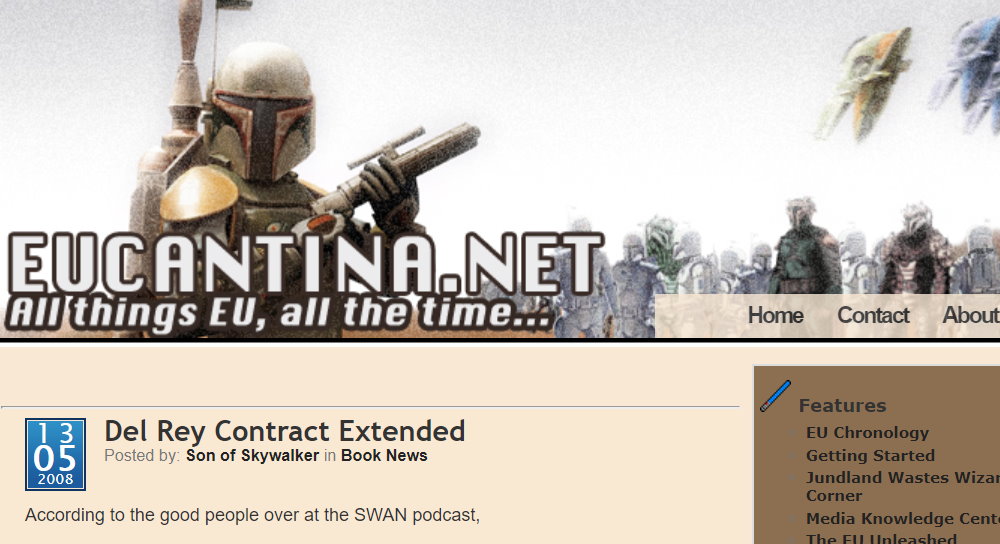 Between 1999 and 2009 Lightsabre.co.uk brought news, fanfic, podcasts and much, much more to the masses. Our one hundred and ninth guest was part of the team behind EU Cantina – Austin Blankenship.

AB – Thanks for having me Mark! Been using Lightsabre for its interviews for a long time, so actually being added to the webmaster archive will be neat. 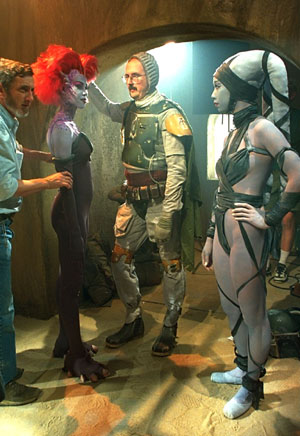 AB – When I was extremely young, I saw the Special Edition versions of the films in theaters. As soon as they came out on VHS I had them. The action figures are what really interested me. The movies didn’t make sense in parts at my age, but I would love to play with my Ben Kenobi and Darth Vader action figures. When The Phantom Menace was announced, that got me back into the film aspect. I would rewatch the OT over and over until Episode I came out. Same thing happened leading up to Attack of the Clones. Unfortunately, that made my attention shift away from Star Wars, but Revenge of the Sith managed to bring my focus back to it.

Lightsabre – EU Cantina launched October 15th 2007 and in only a few short months has become one of the key locations to visit for Star Wars news. How pleased are you with the progress of the site so far? 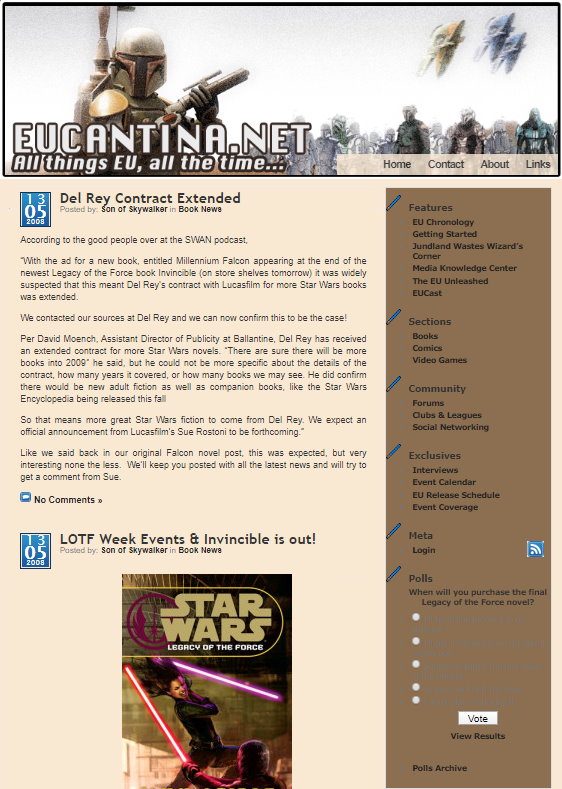 AB – Oh, I’m immensely pleased. When I came on to the website, it was just a forum hosted by some make-your-own-forum-site. I joined the staff, and not long afterwards we decided to make a full site. The forums had a lot of content stuff on them already, so we figured it would be a good idea. I had no clue that it would take off like this. In such a short time, I feel that we’ve made great progress, and I’m very proud of it.

AB – A New Hope, hands down. It is Star Wars, you know? It started it all, and I still think that the plot and use of the characters are better than the others. Even if parts are outdated, you can’t beat the story.

AB – It’s hard to consider my self a part of the Star Wars phenomenon. I’m just lucky enough to be around during the time that it’s still in its prime. I wish I was, and EUCast, our podcast, is probably the best way I can be part. Because the Star Wars phenomenon is the fandom. So when you work on something like the site, or the podcast, where fans are such a big part of it, I guess that’s a close as a normal guy like me can get to being a part. 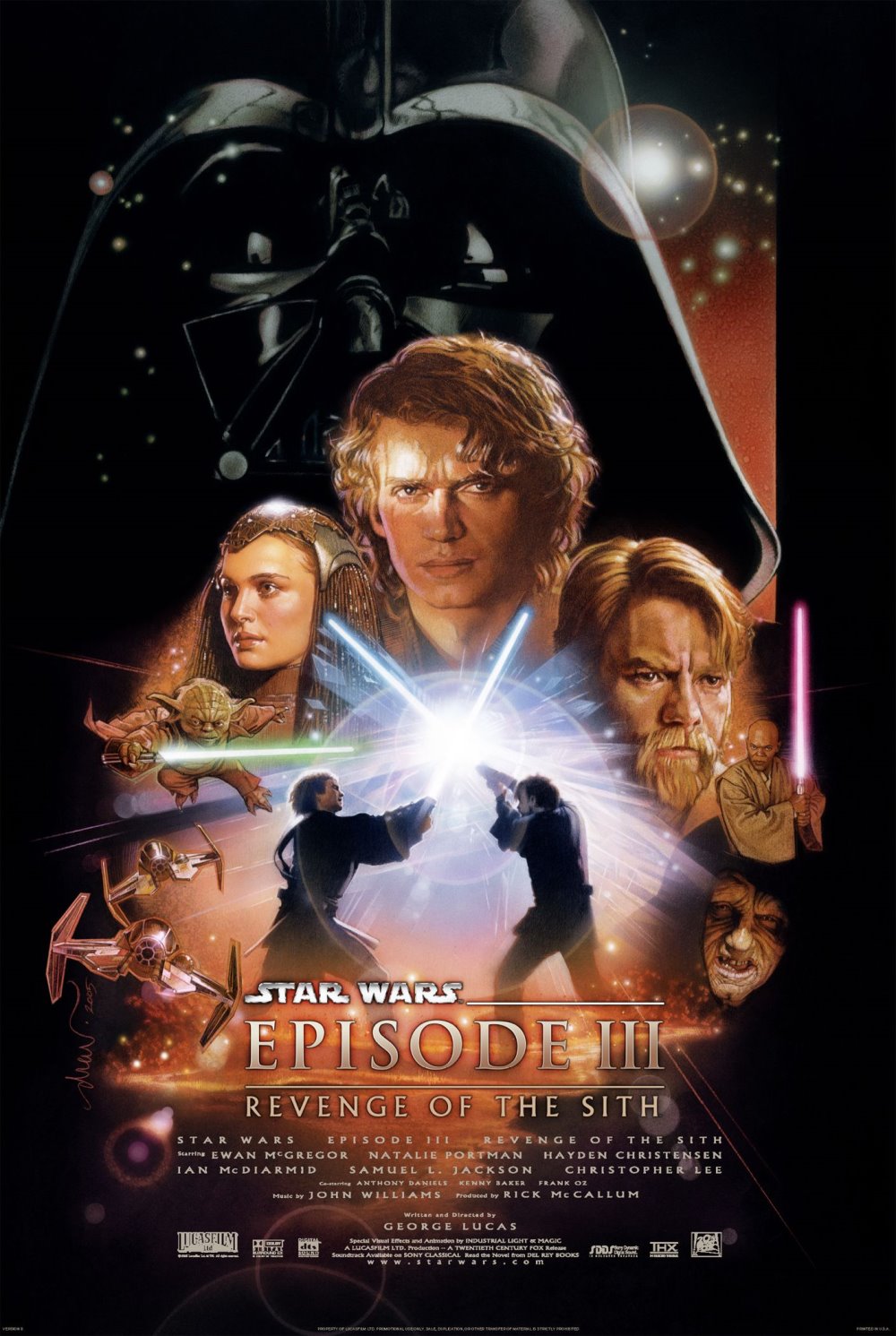 AB – One of the greatest moments was the midnight premier of Episode III. Once again, it was great because of the fans. The hype was incredible, so when you go to a movie theater and find all these people that you don’t know, but are excited enough about the same thing as you that they dress up at midnight and wait for hours to see a movie they could view the next day, it’s great!

The best parts happened before the movie. Everything from watching the films on a portable DVD player with thirty strangers trying to see it over your shoulder, to walking into a bathroom and finding people having lightsaber fights. The best moment of that night happened after we had been let into the theater. The movie almost started, but then experienced difficulties. The manager told the audience that it would take ten more minutes. Instead of complaining, Star Wars fans do what they do best. Two guys walked up to the very front, took some paper lightsabers that had been handed out, and re-enacted the Vader Obi-Wan duel. It was spectacular.

AB – Very difficult question…I’ve never thought about it. I guess I’d say Obi-Wan, but that could just be because he’s my favorite. I’d like to say I’m similar to a wise Jedi master, but…that would be exaggerating. 😉

AB – I would remake Attack of the Clones. It’s put a sticky spot on Star Wars that even the best cleaner can’t take off. If I went for a smaller change, I would separate the Obi-Wan/Anakin duel from the Yoda/Palpatine. They could be better if they were separate.

AB – I’m a big sports fan. I’ll watch most any sport, but I have a soft spot for football and basketball. I also enjoy broadcasting stuff, hence the podcast.

Lightsabre – Now the prequels have been and gone and are sitting on millions of shelves across the globe, what is the next chapter for the site? 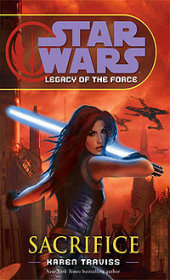 AB – It’s The Clone Wars movie, for sure. I predict (and this is going on record) that it will be better that the prequels. After that does well, the whole TV series had to come out, and I’m hoping that will be just as good. That should give us plenty to cover. Plus, with the Legacy of the Force book series coming to an end, it won’t be long before there’s a new one to talk about.

Lightsabre – And where do you think Lucas will take us next on our trip through the Star Wars galaxy?

AB – Well, after The Clone Wars, I’m told that the next series will be about a gangster underworld of Star Wars, that won’t include any of the main characters from the films, besides Boba Fett. It’s not a good move in my opinion, but we’ll just have to cross our fingers and hope that Lucas can pull it off. The odds aren’t good though.

AB – It’s hard to tell. I hope to get into sports broadcasting, which would combine my two favorite things besides Star Wars. I’m sure EU Cantina will be around for a long time. So that should keep me busy and make sure that I never get too far away from the saga, no matter what I do. 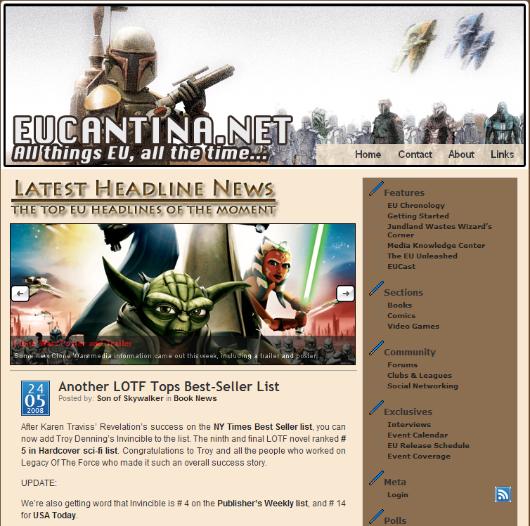 AB – Lightsabre is a fantastic site. As many others have said, how do you score such good interviews? That impresses me, more than anything else about the site, though I must say that the site would be impressive with or without the interviews. Like I said before, I’ve used Lightsabre for a long time, and when EU Cantina was first looking for affiliates to help get our name out, I instantly recommended Lightsabre. Really, it’s a terrific website.

Lightsabre – It’s been a great interview, and thanks for being our guest. Just one final question. George Lucas calls you to the Ranch to discuss a top secret project. Nervously you enter his room, passing the Pig Guards and stand before his throne. He asks you to step slightly to the left, and beneath your feet you notice grills, and the foul hot breath of a Rancor beneath your shoes. Narrowing his gaze, the Flannelled One asks you a question. “To continue the story of the Skywalker clan we can do it one of 3 ways. Comics, novels or cartoons.”
Which will it be?

AB – In that situation, I would have to look George in the eye, and unblinkingly tell him, “As long as you don’t do the dialogue, any of those should work.”

This interview was originally posted on lightsabre.co.uk on 25th May 2008.